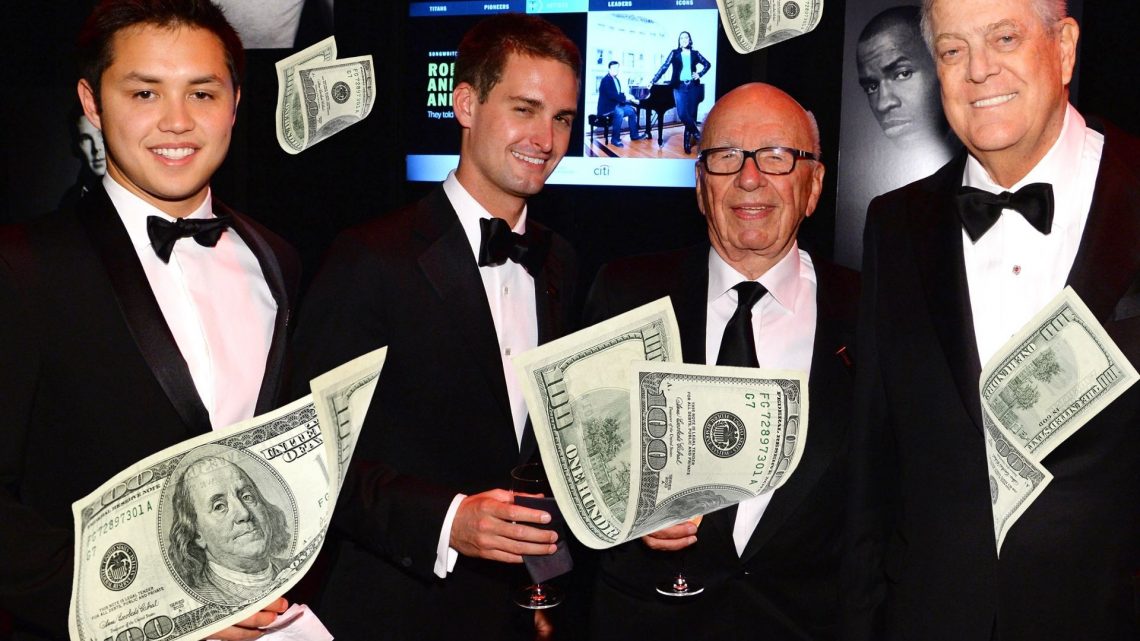 Axios reported on Thursday that "wealthy people and corporations have so much money they literally don't know what to do with it." According to the outlet, a combination of low interest rates (making it easy to borrow from banks) and globalization (driving down labor costs) have fueled a Scrooge McDuck-style rise in corporate profits since the 2008 financial crisis. At the same time, in a story familiar to generations of Americans, economic gains have disproportionately gone to the world's ultra-rich, who have also recently benefited from policies like Donald Trump's tax cut last year, which rewarded the wealthy and corporations. And rather than using those windfalls to raise salaries for workers (lol) or even just spend on consumer goods, these entities are either buying back their own stock, sitting Smaug-like on piles of cash, or blowing it on dubious investments. From Axios:

Wealthy households and individuals are pouring money into asset managers, betting on companies that lose $1 billion a year, bonds from little-known Middle Eastern republics, and giving hot Silicon Valley start-ups more venture capital than they can handle… But even that hasn't been enough to account for all the new money. The top 1 percent of U.S. households are holding a record $303.9 billion of cash, a quantum leap from the under $15 billion they held just before the financial crisis.

So what should the imagination-poor rich people do with all of those commas? A few suggestions:

Go to Space and Stay There

In the 19th century, white people in the United States were driven by an adventurous, rapacious spirit to go West, earning fortunes and committing atrocities against indigenous communities along the way to "settling" the entire American continent. Minus the committing atrocities part, today's .01 Percent seems to be gripped by a similar mania about the final frontier. Elon Musk shot off a car into a void, a reeking-of-divorced-guy-energy Jeff Bezos recently announced he was into space colonies, and now NASA is planning on letting private companies sell extremely expensive tickets to the International Space Station. Trying to develop private space travel is extremely expensive and likely to result in a lot of failed literal moonshot projects—a perfect sinkhole for your immense cash reserves to fall into. As a bonus, maybe some of the space-obsessed oligarchs will follow through on Musk's dream of dying on Mars.

But if you have more earthbound tastes, there are other options.

Force Kids to See Your Name on School Field Trips

Thanks in large part to the writer Anand Giridharadas, more people have become aware that philanthropy is too often a tool for the rich to absolve themselves of sin while at the same time retaining more than their fair share of power in an alleged democracy. OK, but it must feel pretty good to have your name on the wings of famous museums and get some glowing press, a la the Koch brothers, right? You can spend a lot of (tax-deductible) funds sprucing up the nation's universities and opera houses, and as a bonus it might distract from your history of less laudable political spending. Just make sure you haven't made your millions in a particularly heinous fashion, or those institutions may not want to get anywhere near you.

Luckily for the ethically challenged out there, there's a group of people who is always willing to take anyone's money:

Turn Politicians into Your Vassals

During the 2012 primary, almost no one wanted former House Speaker Newt Gingrich to become president, except for maybe Gingrich himself. Still, his campaign was able to limp along for months due to the generosity of casino mogul Sheldon Adelson, who donated a total of roughly $20 million to Gingrich and his affiliated PACs. Thanks to the wealth-friendly U.S. campaign finance system, donation caps are as easily circumvented as speed limits, and Adelson's free-spending ways led some Republicans candidates in the 2016 cycle to shamelessly grovel before him, with Marco Rubio emphasizing his support for Israel and opposition to internet gambling. This is arguably bad for American democracy, but if you have Adelsonian wealth, doesn't it sound fun to force senators to pander to you?

Then again, no need to turn strangers into yes-men if you have options closer to home.

The Koch family is extremely fortunate: Not only do they have immense wealth, they also have younger members like Wyatt Koch, who sells $120 shirts decorated with actual money bags. Keeping failsons and faildaughters like that afloat as they bounce inevitably from project to project, collecting first art, then horses, then launching a pine nut milk startup, whatever—well, it's bound to add up. (Alternatively, you could just hire them.)

But if you still have some money left after all that (and you probably will)...

You know you want to. Do it! How hard could it be?