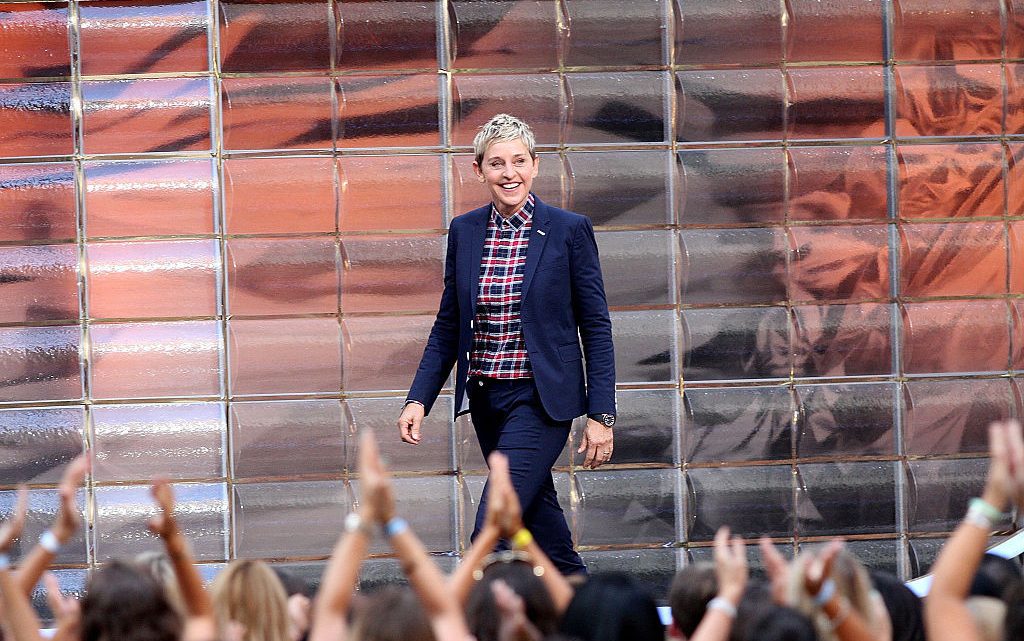 Ellen DeGeneres might be done being your largely apolitical pick-me-up. Ahead of her return to stand-up with her Netflix special Relatable, the 60 year old comedian spoke with the New York Times about the constraints of keeping up a formulaic talk show for so many years.

The article’s sub-headline spilled the beans that she’s considering ending her show, encouraged by her wife Portia de Rossi (her brother Vance DeGeneres has been urging her to stay). It’s hard to avoid the knee-jerk reaction that de Rossi must not care about the rest of us if she wants to take away the most reliable Xanax in America. Who else can light up living rooms, outdo influencers on YouTube, and go viral on Instagram pranking P Diddy besides Ellen? But the story takes a surprisingly eerie turn when you realize the person who has soothed and delighted us all these years with her consistent, fun-loving humor day-after-day may feel trapped playing a caricature of herself.

Degeneres recounts her frustration with fans always expecting her to dance in the streets (something she’s brought up before), along with her anxiety-filled decision to stop dancing on the show in recent years. The article also points out the odd in-person contrast of her mellow sly humor with the high energy of her party-ready audience. “The talk show is me, but I’m also playing a character of a talk-show host,” she says. None of this is a total surprise; Ellen’s current persona is more light-hearted than her personality, or even the persona she took on in previous years doing stand-up. She even uses that to her advantage at times, getting celebrities to answer particularly pointed questions once their guard is down and sneaking in jokes that rib them more than they might realize.

Degeneres is also by no means a notably dark person (and apparently not reading the news has helped her maintain some of that cool collected glow). But like the stereotype of most comedians, she’s sensitive to criticism and fears letting people down. She’s also still living with the sting of straight fans turning on her and queer fans simultaneously demanding more from her when she famously came out as a lesbian on Time magazine in 1997.

By the time her wife de Rossi pops up in the article to explain why she wants DeGeneres off the airwaves, she comes off like a loving protector of a woman who may care too much about making everyone else happy. De Rossi apparently offered oddly parental advice to DeGeneres before her Times interview: “Just remember, the nicer they are, the more they are going to screw you.” And her passion for wanting Ellen to achieve her full potential bubbles over in her few words, somehow overpowering the fact that she’s advocating our pal throw in the towel. “I just think she’s such a brilliant actress and standup that it doesn’t have to be this talk show for her creativity,” de Rossi said. “There are other things she could tackle.”

While it’s still unclear if and when DeGeneres will end her talk show, it seems her upcoming return to stand-up will be an exciting first step in regaining control over her voice and, yet again, shifting the person behind her talk show “character.” But this small window into her current dilemmas sets up a surprisingly tense situation with high stakes (though, lest we forget, it’s not as if she hasn’t been handsomely paid for her work, which is in itself a different kind of lifestyle trapping). As of yet, neither Ellen nor her closest confidants can fully decide whether her years-long commitment is an irreplaceable American lifeline or a self-sacrificing project preventing her from reaching new horizons.

First Someone Murdered His Zebras, Then He Was Shot Too