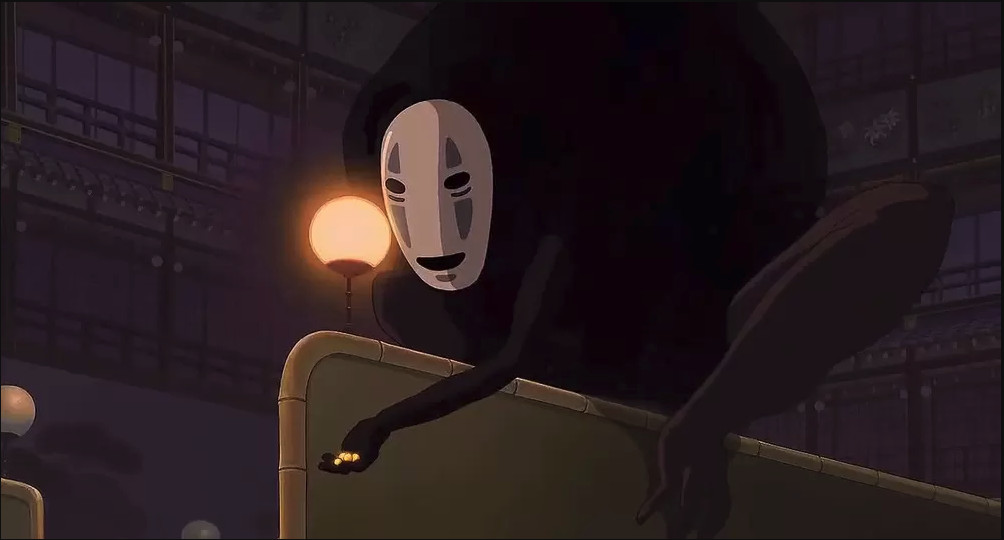 ‘Spirited Away’ Is the Best Halloween Movie

Halloween is hands-down the best holiday—the festive ghosts, clever costumes, and Hurley from Lost’s annual Hawai’ian haunted house pretty much solidify that. Even so, there's a lot of awful shit that can go wrong if you venture outside to participate in the spooky revelry. Your safest bet, by far, is to hunker down with some of the movies that make this unholy time of year so wonderful. There are tons of fantastic Halloween movies out there: Halloween, Halloweentown, and Halloweentown II: Kalabar's Revenge, just to name a few. But the best of the bunch, though it may not be considered a "traditional" scary movie, is Hayao Miyazaki’s Academy Award-winning ghost story, Spirited Away.

The anime centers on a Japanese tween named Chihiro and her parents, who are moving to a new house but wind up trapped in the spirit world along the way. It’s an objectively great film that grossed $289 million at the box office, won Best Animated Feature at the Oscars in 2003, and racked up myriad other acknowledgments. Audiences and critics alike praise it as a visual masterpiece and sterling example of character development. The artistry behind Spirited Away set a new benchmark for animation, a medium Miyazaki once said, “soothes the spirit of those who are disheartened and exhausted from dealing with the sharp edges of reality.” Channel Criswell expands on that idea in the video below.

Spirited Away hits all the right notes for a spooky evening in. Chihiro and her parents stumble into the spirit world, mistaking it for an abandoned theme park. They immediately discover a gourmet spread of peking duck, dumplings, and fried rice. The seemingly up-for-grabs treat looks achingly delicious, but in true Halloween fashion, it's actually a trick. As the sun sets, Chihiro's parents transform into pigs, leaving their daughter scared and alone. In her book, Miyazakiworld, Susan Napier describes the destruction of Chihiro's known world as an “intimate apocalypse,” which is a terrifying concept.

Chihiro is ultimately helped by a magic boy with blue hair named Haku who can turn into a dragon at-will (a pretty dope Halloween costume). She also teams up with a gruff boiler worker named Kamaji and a no-nonsense woman named Lin, blending into the spirit world by taking a job at a bathhouse for deities, ghosts, and other magical creatures. A fierce witch named Yubaba hires Chihiro in exchange for her name (creepy), and for much of the film, our protagonist goes by the name "Sen."

Villains are important to a good Halloween movie, but no one in Spirited Away is truly evil like Michael Myers in Halloween or Kalabar in Halloweentown. Yubaba is mostly evil in the way all bosses are kind of evil, but she shows her tender side through her love for her son—a massive, aggressive, candy-scarfing baby. The only other character with villainous potential is a see-through spirit called No Face, who eventually transforms into a gluttonous beast, rampaging through the bath house and gobbling up employees. Though he's not truly evil, he is pretty scary.

Spirited Away captures the fear and excitement of being young and in an unfamiliar place where anything can happen. When you're a kid, the magic of Halloween manifests in exploring your neighborhood after dark, when cookie-cutter houses transform into haunted mansions. Halloween is a coming-of-age holiday, and Spirited Away is one of the best coming-of-age stories ever told.

So if you're going to stay in on Halloween, you need a movie that's genuinely more exciting than dogs in adorable costumes. With its spine-chilling villains, supernatural vibe, and plenty of tricks and treats, Spirited Away is the perfect ghostly flick.

These Candidates Want to Eliminate Your Student Loan Debt