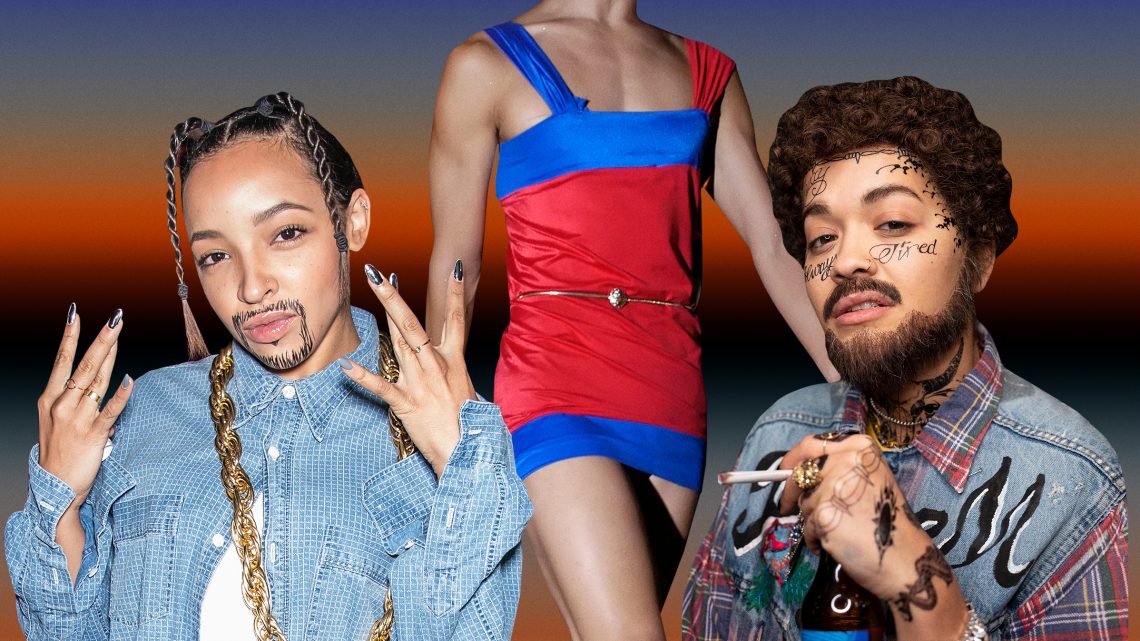 This year I dressed up as Lenny Kravitz for Halloween on a whim. I hadn’t crossdressed as a male celebrity since childhood, but I didn’t think much of it, at least initially. My friend and I wrestled my afro into a mohawk, and I threw on a heavy leather jacket over an all-black outfit with lace-up heels, some jewelry, and a single small hoop earring. It was hardly a “costume” in the official sense, but with my hair in a bold new style evoking a certain masculinity, I found myself admiring my reflection and the chiseled squareness of my jawline, enjoying the way my hair was hanging down in front of my face. The one earring was giving me 90s Larenz Tate in Love Jones vibes, and I continued wearing it for the rest of the week.

I became profoundly aware that I wasn’t dressing as Kravitz in a silly way, but to feel unironically attractive and celebrated for leaning into a masculine appearance. It was an outfit I could theoretically wear any old day, but when my friend asked if I’d start styling my hair that way more often, I struggled to think of a casual, non-queer occasion where I’d be comfortable sporting the look, even though it was clearly making me feel amazing.

Unbeknownst to me, I’d taken part in a century-old tradition of queer Americans using Halloween as a chance to explore sides of themselves they were forced to repress the rest of the year. In the mid-19th century, more than 40 US cities criminalized crossdressing, and men in New York could technically be arrested for "impersonating a female" until 2011. In the 1970s, Halloween was dubbed “the gay Christmas” as it became an opportunity for underground drag, cabaret, and ballroom communities to step into the mainstream one night a year, on the street or in parades. Halloween traditions today, like the drag queen high heel race in Washington, DC, are offshoots of this legacy. But many retellings of Halloween’s queer history are dominated by gay male narratives, so I'd never considered what crossdressing could mean to a cis queer black girl like me.

Thinking back, my costumes always represented a certain tension between not feeling naturally comfortable in hyper-feminine clothes and the wish to still feel desired by men. As a kid, before I had crushes on anyone, I let my tomboy spirit dictate my Halloween costumes. I could be a ninja, or Jimi Hendrix, or (just go with it) a witch who wears pants. But in high school, when I was barely out of the closet and ensconced in a white heterosexual party scene, my costumes involved straightening my hair, wearing makeup (which I never wore normally), and throwing on a variation of a crop top and bottoms—once I went as a soccer player, another time I was a member of Salt n Pepa. In college, when I was openly queer but uncomfortable presenting too masculine, I settled on middle-ground options like Erykah Badu and Aaliyah. And even this year, when I opted to go as Will Smith in The Fresh Prince of Bel-Air to a super heterosexual party, I had to fight off lingering worries that maybe I should’ve worn something “more flattering.”

Looking back, the pressure to appear feminine in high school and college largely came from the anxiety that perhaps I was queer because I hadn’t made myself attractive enough to men out there I could actually connect with. Childhood memories of combing through cabinets full of hair products with concerned older women, or being constantly reminded to fix my posture, made it seem like I had a lot to change if I wanted to appeal to the opposite sex. It seemed like coming out and then dressing more masculine on top of everything would doom any chance I had left of experiencing heterosexual love.

Simultaneously, I felt a competing pressure observing styles in the queer womxn community to dress more masculine to attract girls or present more queer to make flirting easier. I spent college constantly oscillating between versions of myself depending on what crowd I’d be seeing that night. As you can probably imagine, it was exhausting. Over time, I learned to strike a balance between styles, making the whiplash less extreme. But in retrospect, the Halloween costumes I chose in each era of adolescence pretty accurately reflect the stage of the journey I was on.

This year, I started paying closer attention to the costumes people choose and the temporary transformations they enable. I noticed other queer people using Halloween as an opportunity to test out more binary-pushing looks. At one house party, the belle of the ball was a gay man dressed as a devil in a tight red bodysuit, but he’d added butt padding that gave the costume an exaggerated, feminine twist. The booty-centric outfit wasn’t for laughs though—he isn’t a class clown type. He looked elegant and poised and frankly mesmerizing.

I asked around, and it turns out my friends had their own stories about what crossdressing on Halloween has meant for their gender expression and sexuality. Al Nadeau, who is non-binary but spent the majority of their life as a woman, dressed up as a drag queen one Halloween after transitioning and found it was a fun and liberating way to engage with their former gender. Another friend, who wanted to stay anonymous, shared that when she was 19 and first becoming aware of her queerness, she dressed up as a male tourist for a quick, silly costume but started calling herself a “lesbian birdwatcher” halfway through the night, even though she hadn’t personally identified as a lesbian yet. In some ways, Halloween can air our subconscious desires, foreshadowing identity changes before we’re fully ready to acknowledge them ourselves. It’s also a reminder that humans in general contain multitudes, and that goes for cis and non-cis people alike.

My newfound appreciation for the exploratory aspects of Halloween also raises an interesting question: Why not dress more masculine in real life? Who’s stopping me from wearing my afro mohawk to work? It’s hard to tell whether my day-to-day style is purely mine, or if I’m conforming to some blend of my own beauty standards and those of society, opting for the most comfortable (and perhaps most privileged) option.

But there’s a clear trajectory from where I started and where I’ve ended up. Halloween, like queer spaces, is a crucial part of chipping away at decades of miseducation, turning loaded decisions about what to wear into the fun, sensual, hilarious, affirming experiences they should be. Perhaps the holiday’s greatest trick and treat is convincing people in our homophobic society to queer themselves for a day, which is truly something to celebrate.

‘Spirited Away’ Is the Best Halloween Movie