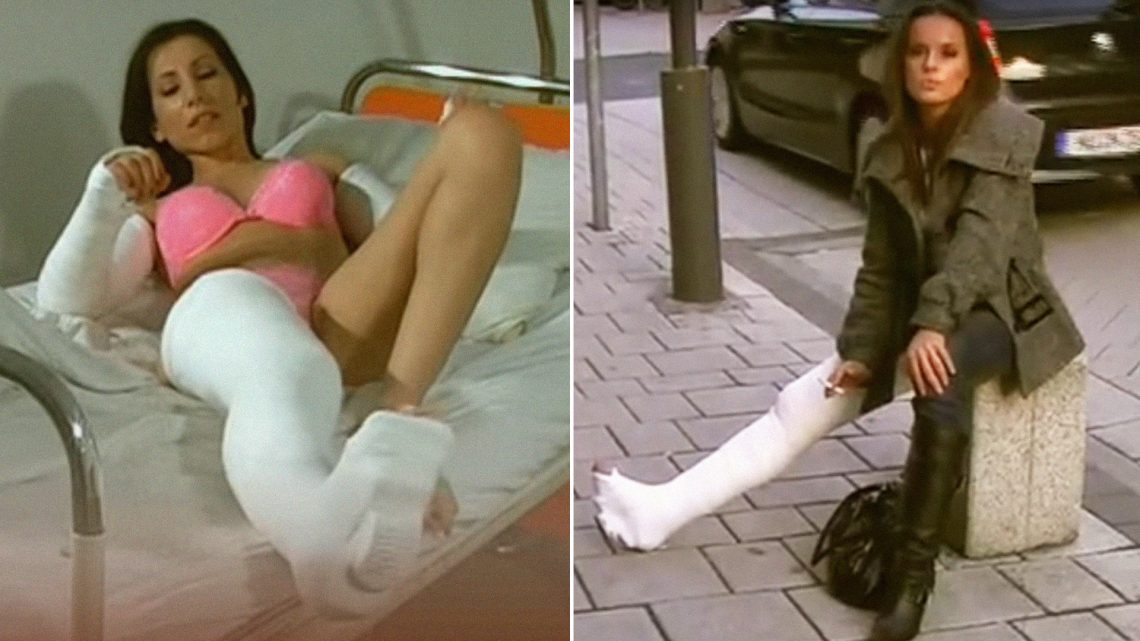 We caught up with one such caster—Piotr, a 25-year-old IT programmer from Poland—to set the record straight on cast fetishism.

VICE: For the uninitiated, how would you define cast fetishism?
Piotr: To me, it consists of multiple things. The attraction to people wearing an orthopedic cast (or casts) is the most simple answer. The appreciation of a body part and its shape contained in a hard shell that makes someone more or less immobile. The desire to cheer, comfort, and help someone who is bound to wear it. Sexually, the will to overcome additional difficulties the cast causes and use this as [a sexual] stimulant.

But there’s more to it. It’s actually quite complex and each fetishist has his or her (although female ‘casters’ are quite rare) own preferences. Take any orthopaedic cast you’ve ever seen—there will be someone who claims that it’s the best one. And I could write an essay about the smaller details and accessory combinations. Light fibreglass or heavy plaster (gypsum), white or colored, the immobilization angle, walking cast heels, slings, crutches, wheelchairs, accompanying clothing... You name it.

What I’d like to point out though, is that the vast majority of cast fetishists are not about enjoying and inflicting pain. It’s just the visual part—the cast and its entourage—that is appealing. And the person wearing it. It’s like seeing someone attractive in sexy clothes, but the clothes here have some additional purposes and features. There is also a feeling that someone in a cast needs help with many simple tasks. A ‘damsel in distress’ comes to mind, although it can apply just as well to guys. Moreover, the cast fetish is often accompanied by more fetishes, as it fits really well with quite a few—domination, bondage, fetishes for some particular body parts, and many more. I believe though it’s most commonly associated with leg and foot fetishes.

When did you first realize that you were into the cast fetish?
I remember that when I was 13 or 14, one of the girls from my class injured her arm. She had it wrapped in a bandage and wore a sling. We used to sit together on one desk and she asked me if I could help her take notes. I agreed. Silly as it sounds to me now, I think it was the first time I really felt sexually attracted to anyone. The fact that she was sitting there, asking me to do her work, while looking pretty and helpless with her ‘useless’ arm hanging in the sling, unable to grab the pen… It was driving me crazy, but I didn’t really realize then what it was all about. Then when I was about 15, I read the book The Way to Dusty Death by Alistair MacLean. There happened to be some descriptions of a young woman with a broken leg. Reading them, I felt excited and wrong at the same time—“why am I reacting so weirdly to this, broken bones ain’t no fun!” Then I searched for ‘leg cast’ on the internet, soon came to know about the fetish… And it all started.

Alright, what specifically attracts you to it?
I think that what turns me on are the contrasts. To give just a few examples… The heat of the body against the coldness of the cast. The shape of the limb against bulky and stiff plaster. Toes or fingers sticking out from the lifeless prison, being the only part that can be moved. Clumsy hopping on crutches or limping instead of graceful walking. Having a foot fetish, I love how cute and vulnerable toes look sticking out from the cast with the rest of the foot hidden and immobile. How the leg swings mid-air when a woman is hobbling around on crutches, how she rests with her leg propped up on pillows or with her arm in the sling… I could go on. But that’s just the visual part of it. And the psychological part is even more important here. I like the image of helplessness of the ‘victim’ and I want to help. Cooking something, buying groceries, helping her walk or, in the case of an arm cast, doing some manual work, putting a sock on her cold toes… It’s really hard to stuff it all into few sentences.

There’s a number of websites and forums dedicated to photos, videos, and discussion of cast fetishism. What sort of relationship do you have with the cast fetish community?
I sometimes buy photos or videos from cast fetish sites, as I know that the casts there are recreational, as the community calls it—there’s no injury involved. Moreover, the photographers and models know what the fetish is about so they know what to show to make it as attractive as possible. I’m not a forum person, but there are indeed big forums where people discuss their preferences, post pictures of casts they made (some even like to put a cast on themselves), or webfinds, tell or make up stories, promote paid stuff, and so on.

Before our interview you mentioned a more creepy side to the fetish—so-called cast stalkers who see that a blogger/YouTuber has broken their bones and message them for photos. Are these people a large part of the community? How does the community deal with this?
Compared to the size of the community, they’re almost nonexistent. I wouldn’t even call them a part of the community, as it deals with them quickly. If they can be recognized as users of specific cast fetish forums, they are quickly banned. Even though our fetish is unusual, it’s harmless and we don’t want anyone to associate us with such people. Myself, I just find it unacceptable. I can accept that someone finds and saves a photo that is already public on, say, Instagram. You can’t stop anyone from doing that. But it’s another thing to bother a person that probably doesn’t enjoy wearing a cast at all. Especially that these people don’t know what it’s about and it just creeps them out. Well, maybe some of these stalkers find real injuries to be attractive, but sadism is not a part of the cast fetish itself.

I’ve also had my part in limiting their actions. A few years ago, I searched for some videos and one thumbnail looked nice, so I clicked on it. It turned out to be a very young school girl with a broken leg, showing her cast. I noticed a lot of comments under it. They were very nice, comforting, and complimenting, often asking her to do more videos. Then I saw that she already had a few videos about the cast, all with similar comments. I recognized some of the nicknames from other cast videos comment sections. It was shocking and disgusting. I wrote a message to her, explaining it as gently as I could and asking her to show my message to her parents. Her channel disappeared shortly after. I was glad and kind of proud, but the whole situation raised a few questions and doubts in accepting my fetish. I didn’t want to be placed next to such people in anyone’s eyes.

Right, I imagine that this small minority of people create a bad image of cast fetishism. Are there any misconceptions that you’d like to clear up?
What I’ve said over and over again—it’s not about pain. Cast fetishists don’t want to break anybody’s bones. Even if we like to participate in faking the injury (or watch somebody faking it), it’s just for roleplaying purposes. Of course, someone with a real injury that realizes the cast fetish exists and enjoys the attention is okay as well—and there happen to be such cases. The condition is just that it must be enjoyable for both parties. And if you ever meet some creep asking for photos of your cast, just ignore him and don’t judge us all. We’re pretty normal people, and the fetish is just a small part of us.

This Photographer Shoots 70-Foot Waves on His Surfboard