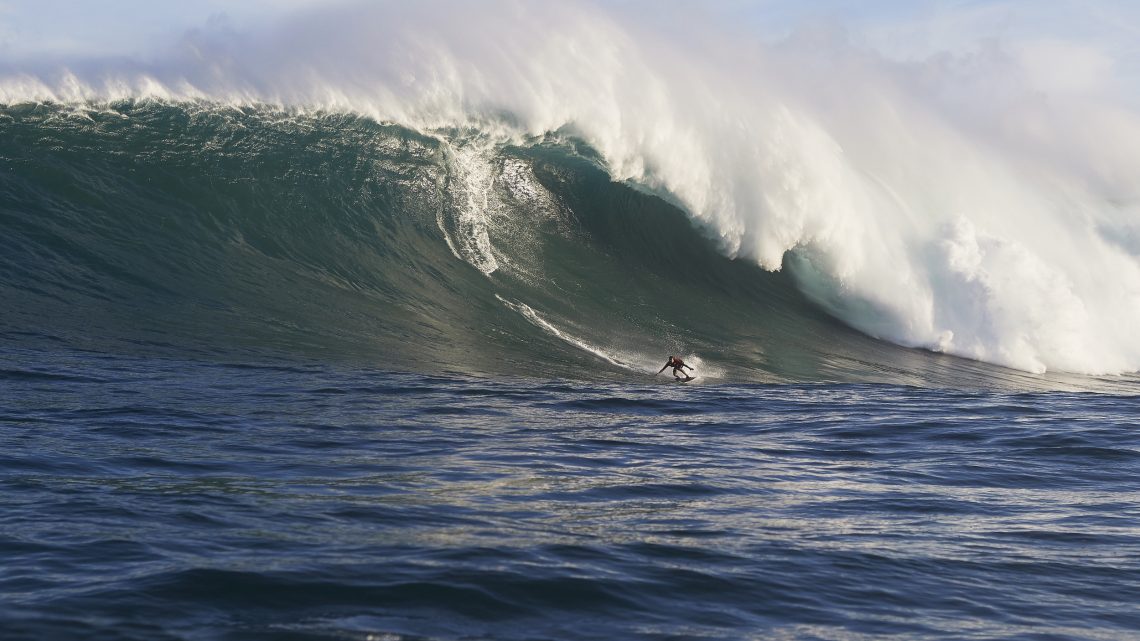 This Photographer Shoots 70-Foot Waves on His Surfboard

Derek Dunfee floats in the water. A wave the size of a three-story building comes barreling toward him. He doesn't freak out, or try to make it over the wall. Instead, he paddles toward it. He has two possible outcomes. One, he makes a near vertical drop down the face of the wave and flies through the water at speeds of 40 to 45 miles per hour. Or, two, he loses his balance, tumbles over the falls, and smashes down those three stories, as if he's on a spin cycle in a washing machine. Dunfee does this again and again. In 2009, during the height of his career, the professional surferpaddled into the biggest wave in the world on record.

These days, Dunfee doesn't just surf these big waves. He also photographs them. While most people who shoot the ocean do it from the water with swim fins, Dunfee shoots from his surfboard. His unique approach allows him to get as close as possible to the monster-sized waves without putting himself at risk of getting sucked in.

VICE spoke with Dunfee about life as an adrenaline junkie and waterman.

VICE: How did you get into surfing in the first place?
Derek Dunfee: I grew up in La Jolla, California, and I've surfed my whole life. Surfing is just engrained in the culture there. I used to surf competitively, and I was invited to some of the biggest big wave surf competitions in the world. In 2013, I got a concussion surfing big waves, and I was dizzy and nauseous for three months. Because of that injury, I started focusing my energy more on photographing out there instead.

How dangerous is big wave surfing? Was your concussion a freak accident?
It’s incredibly dangerous. In addition to that one big concussion in 2013, I’ve had one to two others since then. One time in Fiji, I broke my leg and had to get airlifted back to Los Angeles. I've witnessed people drown out there before. It’s traumatic. Things like that make you take a step back and be more cautious.

But you still surf those big waves, even today. What keeps you coming back?
The adrenaline rush. It's addictive.

During a wipeout, how long can you be trapped underwater for?
Really bad hold-downs can trap you underwater for 30 seconds to a minute and a half. But the technology for big wave surfing has improved significantly—pretty much every surfer has a self-inflating life jacket that, so long as you don’t get knocked out, you can pull to inflate when you wipe out.

Most professional big wave surfers will also pay $500 to $1,000 per big wave swell for a personal water safety team to watch them from a jet ski and rescue them if they wipe out.

What is the biggest wave you've witnessed?
I was shooting at Mavericks in Half Moon Bay, California, this past winter, and it had to be over 70 feet. I'm consistently seeing waves that range between 50 to 70 feet, especially in the winter when the swells are most powerful.

As someone who takes part in but also photographs the action, how do you balance shooting and surfing? How do you decide which approach to take when the swell is good?
I surf every day no matter what, even when it's bad out. So when there are good days, I have no problem shooting since I'm always surfing anyways. My passion for photography is just as great as my passion for surfing. I just love being in the water.

Dunfee shoots on his board.

Tell me about your photographic process when you're in the water.
Even though I'm in the water when I shoot, I'm not swimming with fins. At these big wave spots, because the ocean is churning up so much water, the riptides are really strong. If you’re swimming and shooting at Mavericks, you're going to get swept down the reef and have to get rescued in a couple minutes. When I’m shooting from my board, I'm mobile. Since I've surfed the spot, I know exactly where to sit on that wave so that I'm safe but up close with the action. I'm trying to give that surfer's point of view.

Do you know anyone else who shoots from their board?
I've never seen it, but I'm sure there are other people who have figured out the benefits of it.