Teachers. A principal. And a well-known pharmacist. They were all shot dead in broad daylight last week in India-controlled Kashmir, heightening fear in the world’s most militarized zone.

Since then, at least five Indian soldiers have died and 900 Kashmiris have been detained in a broad search operation to get to the bottom of the seven targeted killings, which a new and little-known group called the Resistance Front has claimed responsibility for.

Those detained are mostly from Srinagar city, where the killings happened, and include Muslim leaders, teachers, and people whom Indian security forces consider “anti-India” activists and “sympathisers” of Kashmiri separatist groups, according to local media reports. Broad search and detention operations are common in the region, which has had an armed resistance movement since 1989 along with active political separatist parties, all of whose leaders are either in detention or under house arrest since 2019.

On Sunday, the National Investigation Agency of India dispatched officers to 16 locations in Jammu and Kashmir for the broad search operations. Jammu-Kashmir Police said one alleged “terrorist” had been killed in a shootout on Monday. The day before, the police said four “terror associates” were arrested in Kashmir’s Bandipora district. All four have been accused of murder and conspiracy to murder Mohammed Shafi Lone, the president of a taxi association. Analysts say Indian security forces are often accused of using taxi drivers in the region as informants. 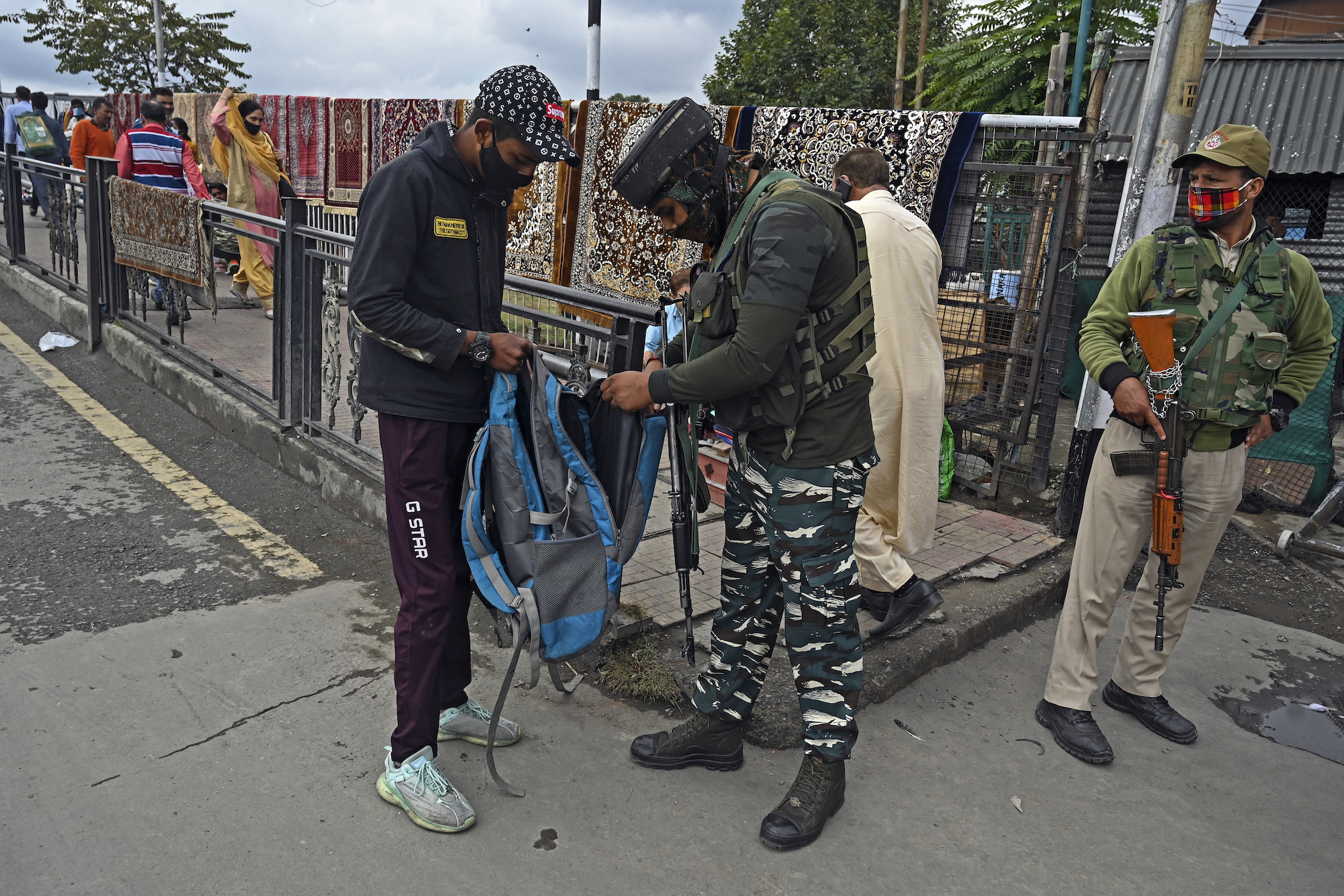 Security personnel check the bag of a pedestrian in Srinagar on Oct. 11. At one soldier for 30 civilians, India-controlled Kashmir has the largest ever soldiers-to-civilians ratio in the world. Photo: Tauseef MUSTAFA / AFP

The Resistance Front emerged as an armed group in 2019 after the separatist politicians were detained, and following the Indian government’s revocation of a 1948 UN resolution that gave Jammu and Kashmir autonomy as the only Muslim-majority state in India. Since then, the Resistance Front, which calls itself “the indigenous resistance of Kashmir,” has carried out attacks in various parts of the region, according to the South Asia Intelligence Review.

This has prompted a massive crackdown by the government to go after what it considers to be “terrorists.”

Of the seven victims of the targeted killings, four belonged to Hindu or Sikh minorities in Kashmir while others were Kashmiri Muslims. A total of 28 civilians have been killed in suspected targeted attacks this year, of whom 21 were Muslims and seven were from Hindu and Sikh communities. The spate of attacks mark the first targeted killings of civilians and minorities by armed resistance groups in the region in decades. 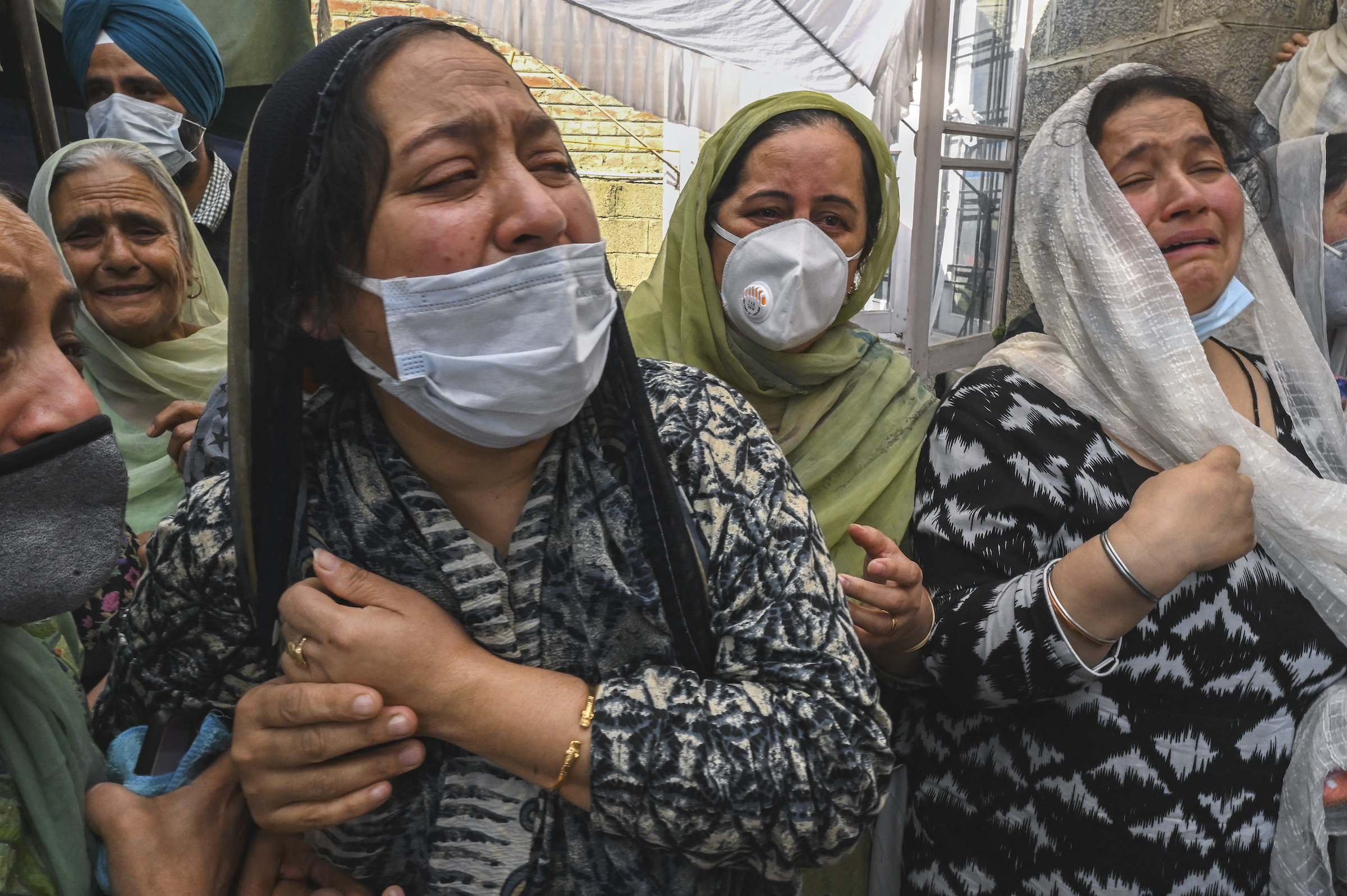 On Oct. 7, the Resistance Front released a statement claiming that the murdered individuals were not targeted based on faith, but because they were Hindu nationalists or “government informants.”

“We want to convey our message to all, irrespective of any religion, [that] whosoever is in or residing in Jammu and Kashmir should not become a pawn of occupier dictates,” the group said. A spokesperson added that “non-combatants become combatants when they try to fix themselves in the socks of the occupiers’ designs.”

The deaths and subsequent detentions have raised fear of further government crackdowns and arrests among the region’s 12 million people. The region has been under frequent harsh curfews and internet blackouts, and has seen the detention of thousands of people in the last two years.

“That’s the nature of the conflict here,” a journalist in Jammu and Kashmir told VICE World News on condition of anonymity. “There’s so much uncertainty – first those innocent Kashmiri killings happened. And now, innocent Kashmiris will have to face the repercussions of those killings.”

“It’s so frustrating to be living in this constant fear that next could be anyone for any kind of action by anyone,” the journalist added.

“I am seriously traumatised,” another journalist based in Jammu and Kashmir told VICE World News. “I have been reporting since last week about these killings and feel we have a big responsibility to not let propaganda widen the gap between Muslims and minorities in Kashmir. There is obviously an atmosphere of fear.”

That fear, the journalist said, is leading to more distrust among different ethnic groups in the region.

“The government of India has responded by detaining hundreds of Muslims and dozens of teachers in the valley after the killing of two teachers from minority communities. It seemed [civilians] don’t trust even Muslim journalists like me now.”

“At a time when we’ve been making so many efforts to restart life and businesses, such events can have huge implications. People are trying not to go back to the 1990s,” he said.