Inside the Little-Known World of Globally Acclaimed Indian Whiskeys

India is the largest whiskey consuming nation on the planet by volume, drinking almost half the whiskey produced worldwide. It is also one of the largest producers of whiskey in the world—seven of the 10 global top-selling brands belong here. But “fine and sophisticated” or “world’s best” aren’t phrases often attributed to Indian whiskey. Which is why it’s surprising when a homegrown label is recognised internationally. Recently, Mithuna by Paul John was voted the third best whiskey in the world by acclaimed critic Jim Murray. But it isn’t the first Indian whiskey to win the title. And going by recent encouraging trends, it most likely won’t be the last.

The road to recognition however, hasn’t been easy. Indian whiskey as we know it is not even considered whiskey by most of the world, especially Europe. Whiskey evangelist and educator Uday Balaji who runs The Whisky Advisor, a firm offering whiskey services, explained to VICE News that much of Indian whiskey is made from molasses, which get ruled out by the very definition of whiskey itself. “Even those that are made from grain or malt, contain only about two percent of these spirits topped off with neutral alcohol,” which invite nothing but the collective frown of the whiskey world.

In the last two decades, however, a movement of sorts has taken seed. Helmed by a bunch of local brands, a range of high-quality single malts are being produced within the country. Unbeknown to the average whiskey drinker in India, these are not only winning bagful of awards internationally, but also shifting global perceptions about Indian whiskey.

“I get to taste an extraordinary cross-section of whiskies of every conceivable type. As you might expect, the quality is wide-ranging—from ‘to die for’ to wondering if you are about to die!” Jim Murray told VICE News. One of the most overlooked factors in tasting whiskey, Murray said, is the finish. “People can rave about the nose or the sweetness or peatiness. But what counts, perhaps more importantly, is the finish.”

For the 2021 edition of his Whisky Bible, Murray tasted 1252 whiskies.

Paul John was introduced to the alcohol business early on by his father who was in the alcohol distribution trade. “However, after college, I started a biscuit factory instead, which soon failed due to my inexperience coupled with logistical oversights,” John told VICE News. It was in the same premises as the failed biscuit factory that he started a distillery and began manufacturing alcohol in 1992. 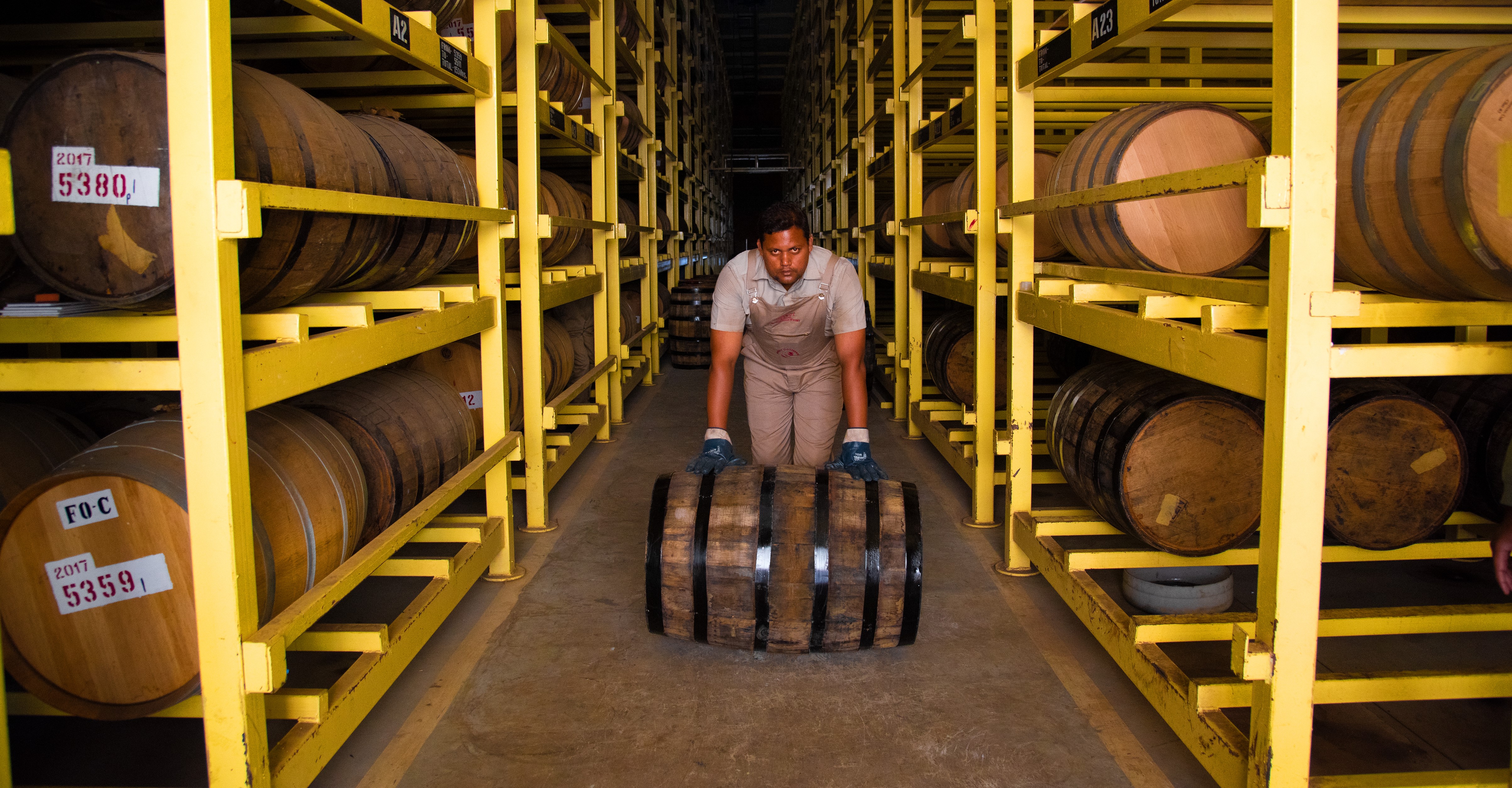 Inside an Amrut warehouse where oak barrels are stacked high for maturation. Photo Courtesy of Amrut.

John began with a whiskey brand, followed by brandy and rum. It wasn’t until he moved to the U.S. for a few years in 1998 that he got introduced to fine single malts. “A dream was born to create such exquisite single malts back home in India,” John recalled. It would be a few more years before he could realise that dream with the launch of his first single malt under the eponymous label, in the UK in 2012.

In the meantime, another Indian alcohol company had begun to create quite a stir. Now a globally recognised whiskey brand, Amrut is often credited with creating the first Indian single malt. (Technically, Solan No. 1 by Kasauli Brewery or Mohan Meakin Ltd, was the first single malt to be made in India in the late 1800s.) Starting out as a small family-run liquor business in the southern Indian city of Bengaluru in 1948, Amrut became known for its brandy and rum under Neelakanta Rao Jagdale, the second generation entrepreneur who served as its chairman for over 40 years.

In the 80s, it started producing blended malt whiskey, and later Jagdale began experimenting with creating a single malt variant, maturing and deriving various expressions from it. In 2001, his son Rakshit who was studying in the UK began testing the waters there with blind tastings of his father’s concoctions—blind because Europe wasn’t yet ready to try a whiskey from India. Encouraged by the favourable reception, the duo officially launched the Amrut Single Malt brand at an Indian restaurant in Glasgow in 2004.

In 2010, Amrut Fusion became the first ever Indian single malt to be voted the third best whiskey in the world by Jim Murray. “Amrut has so far produced 38 expressions of single malts, including the first 12-year-old from India—a limited edition that sold upwards of $1,000 per bottle,” said Pramod Kashyap, deputy general manager of international operations at Amrut.

The Amrut success story has become a benchmark for other players. In the eight years since its inception, Paul John Single Malts has grown to offer over 10 expressions, available in 38 countries. Radico Khaitan, one of the oldest and largest liquor companies in India, also launched their iteration of a single malt, the Rampur in 2016 in Las Vegas. Five expressions have since been unveiled in 45 countries, including the limited-edition Rampur Signature Reserve that retailed at $1,500. “The idea is to not indulge in price wars or competitions, but to together grow Indian single malt as an industry by the few of us who make it,” said Kunal Madan, assistant vice president, international business at Radico Khaitan Ltd. 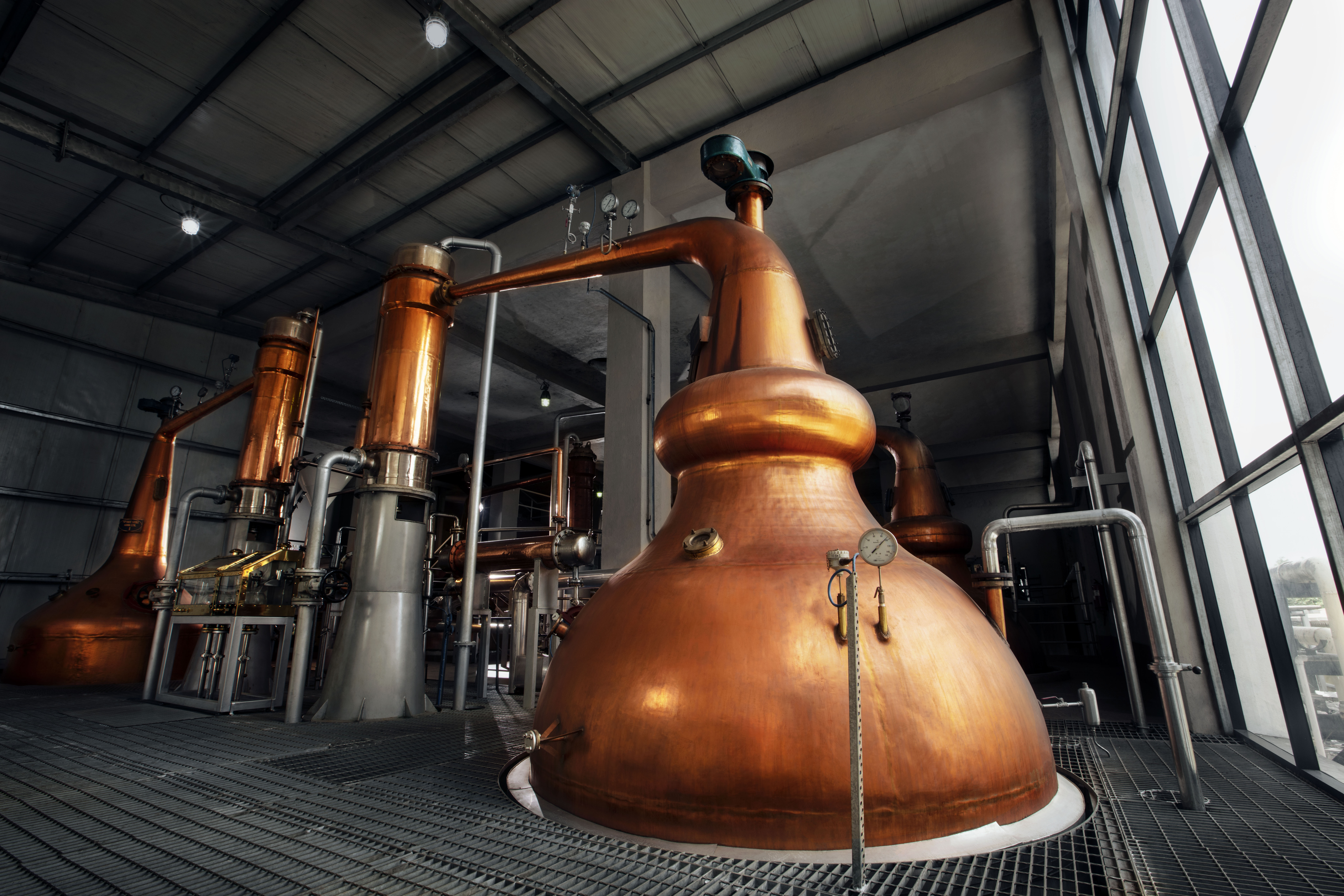 Copper pot-stills are used for distillation at the Paul John distillery in the western Indian state of Goa. Photo Courtesy of Paul John.

In spite of these developments, single malt remains tough business. For one, barley matures faster in Indian climate. “A single malt aged for four years here is equivalent in theory to one aged for 12 years elsewhere,” said Balaji. “However, you cannot put an age statement on the bottle saying that.” Without an age statement that acts as a sort of guarantee of quality, apprehensions about picking up a bottle are high. Another factor is the angel’s share, the percentage of liquid lost from the cask during maturation due to evaporation. Balaji said, “In countries such as Scotland where temperatures vary very little, angel’s share is only about 1 to 2 percent a year. In India, it could be anywhere between 8 to 15 percent. Which is why, to keep aging a single malt for longer here would quite literally mean scraping the bottom of the barrel by the end of it.”

Madan agreed that the single malt scene is not an easy one to venture into. “It takes a lot of investment, manpower, patience and consistency. It isn’t like starting a microbrewery for beer that you see mushrooming around the country. Only the most dedicated are able to sustain a single malt business.” Those who have are reaping the benefits in the form of numerous awards and a growing appreciation for quality Indian whiskey across the world.