A group of current and former Australian soldiers are allegedly running a public Instagram account that mocks allegations of war crimes in Afghanistan, celebrating brutal acts of violence and sharing distressing footage of combat killings to its 8,300-plus followers.

The account, titled State Sanctioned Violence, pledges to “[keep] the legacy of the boys we lost alive”, and is mostly made up of biographies of Australian servicemen—both dead and alive—as well as quasi-motivational quote cards and videos from the frontlines.

“I have two command priorities this year: proxy wars and smashing whores,” reads one post, a quote attributed to the Commanding Officer of the Special Air Service Regiment. “Men don’t have feelings, they have muscles,” reads another. Several posts advertise merchandise stickers sporting the slogan “Make Diggers violent again,” while the account’s bio celebrates “battalions”, “bayoneting” and “beers”.

“Digger” is slang for an Australian or New Zealander soldier. 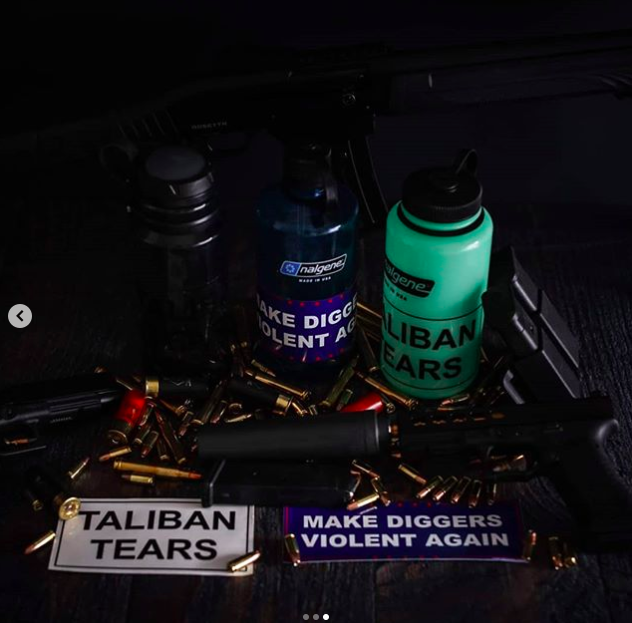 An image advertising some of the "merchandise" available through the account.

It’s within the image captions, however, that some of the more disturbing content is found. A number of posts repeatedly compare Taliban soldiers to “meat”. One jokes about using the skin of dead adversaries as lampshades, and another makes a quip about an Australian soldier filling his drink bottle with the tears of Afghani widows whose husbands “he had just cut down with his M4”. The caption to an image of a soldier who fought in Vietnam tells of how he “ejaculated in a VC's bullet wound”.

Many of the posts have garnered hundreds of likes.

A source reportedly told the ABC that the account is primarily operated by one former and one serving special forces soldier, with much of the content being supplied by former and serving special forces personnel. The ABC was also told that the tone and content of material uploaded to the account has raised concerns among the Australian Defence Force’s (ADF) higher-ranking officials—although Defence claimed it was "not aware of any connection" between currently serving soldiers and the State Sanctioned Violence page.

"If Defence personnel are identified as having posted inappropriate material, they will be investigated and held accountable for contravening Defence policy,” the Defence Force said. 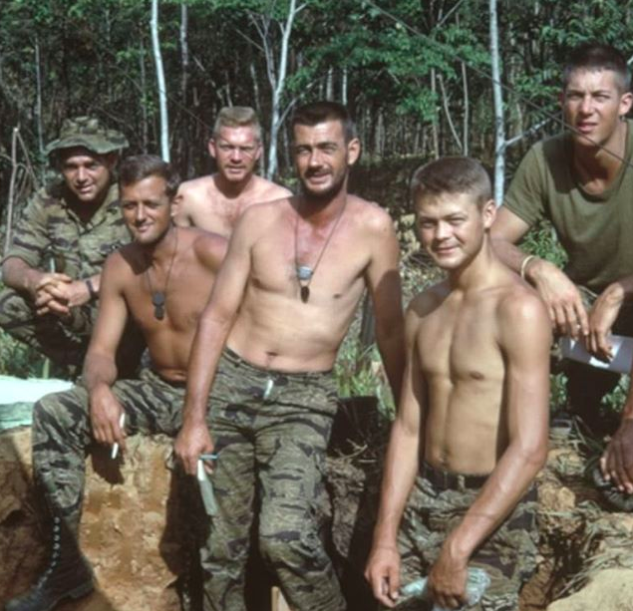 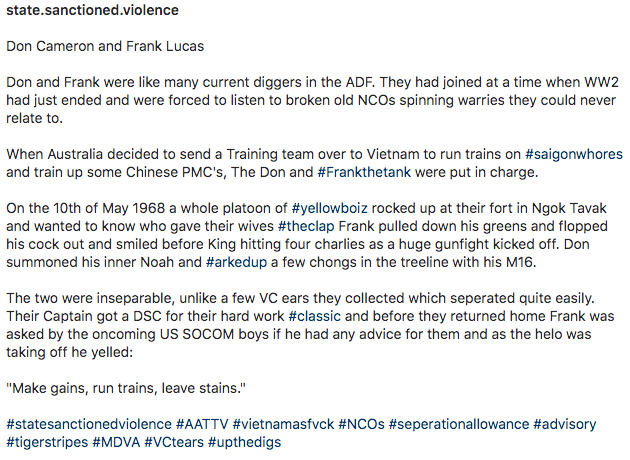 One of the less graphic captions, attached as a bio to an image of former Australian soldiers (above).

The tone of the posts has also raised concerns about toxic and potentially extremist ideologies being seeded throughout the rank and file of the ADF, with many of the image captions echoing the kind of language typically associated with the militant far right. And according to Steven Roberts, Associate Professor at Monash University’s School of Social Sciences, this likely speaks to a broader cultural problem within the ADF.

“There is always a temptation to write off stuff like this as a 'few bad apples' … but it's worth stressing that this is unlikely a few nasty or unsavoury characters,” Roberts told VICE News over email. “What matters is that they are products of the ADF culture.”

Roberts, who has written a number of books on masculinity and social dynamics, explained that one of the common ways the armed forces turns civilians into military personnel is by cultivating an image as “the last bastion of masculinity”: a place that celebrates a particular type of manhood, typically associated with tropes of the violent aggressor, the protector, and the “brother”.

Many of the people following the State Sanctioned Violence Instagram page probably just find the content funny and absurd rather than buying into the ethos, according to Roberts. But he also pointed out that there are others who will be “emboldened by this kind of stuff—and that is a concern.”

“Let's be clear about this: not everyone in the ADF is a member of the far right,” he said. “But an institution that relies on masculinist ideas of protection, violence, borders, and 'us and them' will connect with and inspire people with far-right leanings. The relationship between white supremacy and traditional modes of masculinity is well established in lots of research.”

VICE News approached the administrators of the State Sanctioned Violence account for comment, but did not receive a response.

On Thursday afternoon, they posted a story to Instagram claiming that personnel associated with the page had been encouraged to unfollow it and distance themselves in the wake of ABC’s coverage, alongside laugh-crying emojis. The account was taken down less than an hour later.