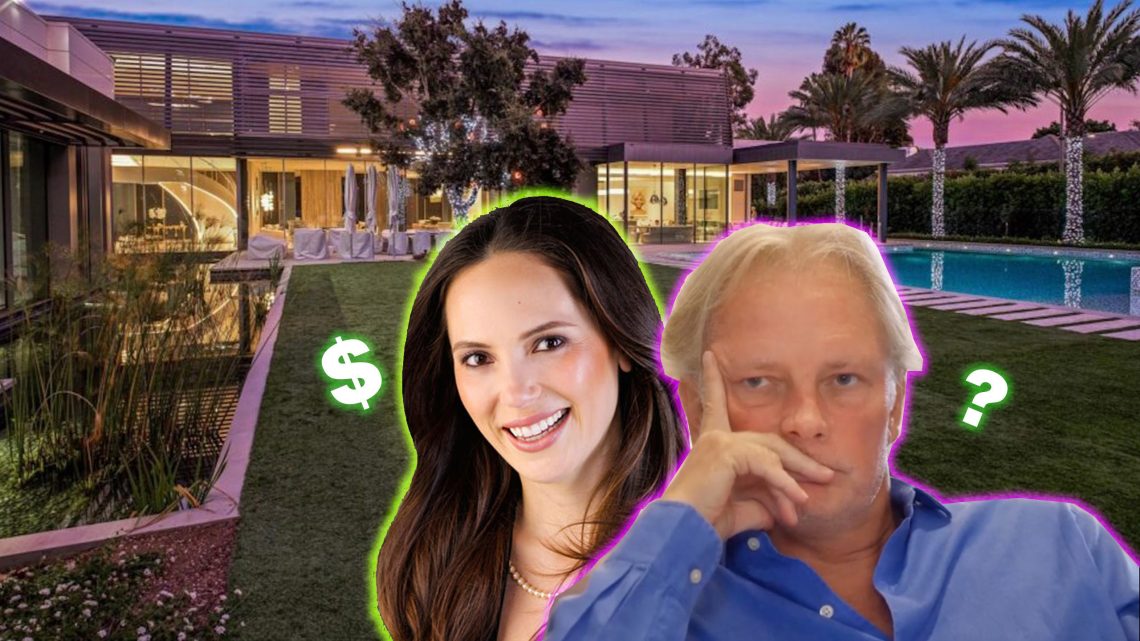 Luxury Realtors Weigh In on the $75 Million ‘Selling Sunset’ House

Among the many unsolvable mysteries on Netflix's _Selling Sunset_—did Romain cheat on Mary at his bachelor party? Why did Justin divorce Chrishell? Which one of the Oppenheim brothers is Jason, and which one is Brett?—there's one question more perplexing than all the rest. What the hell is going on with 1021 North Beverly Drive, and why is it listed for $75 million?

For those of you who didn't binge the newly released season three in a single night, here's a brief primer: Davina Potratz, an agent at the Oppenheim Group with a disfigured chunk of coal for a heart, is trying to sell a giant-ass house in the heart of Beverly Hills. The property's owner, Adnan Sen, insists on pricing it at $75 million, and Davina caves to this demand. She devotes a preposterous amount of time to trying to sell it, but (spoiler alert!) she never succeeds. It's been on the market since 2019, and—while it has sparked rumors online about potentially being part of a money-laundering scheme—it still hasn't sold.

To find out why, I called up four luxury realtors in Beverly Hills who specialize in properties with multi-million dollar price tags. The reason it's still on the market is simple, they said: It costs way, way, way too much for what it is.

"It's an outrageous asking price," said Marc Noah, a realtor for Los Angeles luxury brokerage Hilton & Hyland. "They're asking $4,200 a square foot. That's on par—or even more expensive—than oceanfront, prime Malibu. Where? How? Why? As far as a justification goes, I can't give you one."

1021 N. Beverly has its strengths: It's a 15,605 square foot, seven-bedroom, ten-bath mansion in the heart of Beverly Hills; it sits on an acre of land; it includes a massive swimming pool and a lavish two-bedroom guesthouse. But according to Noah, that still doesn't justify how much Davina is trying to get for it.

"It's not like you have dead-on, insane views," Noah said. "It's right off of Coldwater Canyon—that part of Beverly is a busy street. It's not that big, and it's not like it's the most prime location in Beverly Hills. It looks like a cool house; it doesn't look like it's anything special."

Despite the list price, you'd expect at least a few offers to roll in, even if they're for less than $75 million. But over the course of Selling Sunset season three, that never happens. Steve Frankel, a luxury realtor for Coldwell Banker in Beverly Hills, told VICE that won't change until the Oppenheim Group slashes the price.

"There is an unforgivingness to being overpriced," Frankel said. "Buyers are very leery about making lowball offers because they feel that the seller is not realistic. So that's a huge hindrance. They've got to get a price reduction to start getting some activity on the property."

So how significantly should Davina cut it, and what's the property actually worth? Finding that number isn't an exact science—but according to Santiago Arana, a principal at LA luxury firm The Agency, you start by looking at the acre lot on which it sits. That sold for $5.85 million in 2013, but today, he said, it's worth closer to $10 million. Then you look at the house itself, which, he estimated, cost Adnan Sen about $20 million to build. That leaves us at $30 million—but you'll find a more accurate number by comparing the house to something similar, Arana said.

He pointed to Uber co-founder Garrett Camp's nearby mansion in Beverly Hills, which, like Sen's property, sits on a little over an acre of land. Camp bought the 23,000-square-foot monstrosity for $72 million, or $3,130 per square foot. Multiply that by 15,605—the square footage of Sen's property on North Beverly—and you come up with roughly $48.5 million. Round it up to $50 million, just for fun, and you might have yourself a deal.

For Noah and Frankel, $50 million still feels high. Frankel said he'd slash the asking price in half, dropping the property down to about $37.5 million. Noah said he'd go as low as $30 million.

"There's definitely a chance that it never sells," Noah said. "In this situation, you just have to bring it closer to a strike point."

Assuming Davina has the moral strength to stand up to Adnan and ask him to drop the price (highly unlikely), and assuming he agrees (which, given his stubborn refusal to do so as of yet, also seems unlikely), you're faced with another question: Even at $30 to $50 million, who would ever want to buy this thing? According to Sally Forster Jones, the executive director of luxury estates for Compass—who actually sold the lot 1021 North Beverly sits on back in 2013—while the buyer pool is slim, it does exist. She said there were "several thousand" people in the world who could afford a $75 million home, though the number of quadrillionaires actively searching for one in Beverly Hills is much smaller. (Arana pegged that number at around 30.)

"You have to at least have a net worth of $500 million to be looking at a property of this caliber," Jones said. "Many of these buyers don't need to buy a property—they just choose to. It may be a primary residence, or it may be a secondary residence. Frequently, it's an impulse buy."

Jones said that like all of the transactions she's overseen in this price range—including Spelling Manor in Holmby Hills, which she sold for $120 million last year—when someone finally buys 1021 North Beverly, they'll pay for it up front, and in full. People don't take out mortgages on multimillion-dollar homes, she said; they either dig straight into their wallets or secure their own, private line of credit.

"These buyers are buying cash," Jones said. "The seller is not concerned about whether the cash is being provided with financing or if it's just coming out of their bank account."

It's abundantly clear to every real estate agent VICE spoke with that Davina needs to drop the asking price on 1021 North Beverly. So why hasn't she done it already? Why won't Adnan let her? And why would Jason Oppenheim flagrantly declare that there's a "0.0 percent chance of selling this house" because it's "so overpriced" on camera—knowing his client would hear him say that—only to keep it on the Oppenheim Group's roster for $75 million, where it still sits today?

The answer, according to Arana: "It's fake!"

"If I said that to one of my clients in public, I'd be fired," Arana said. "He went to his client and said, 'OK, we need to create this drama, and that's what's going to sell the house and that's how we're going to get exposure.' Who in their right mind would say that? That's a perfect example of a script."