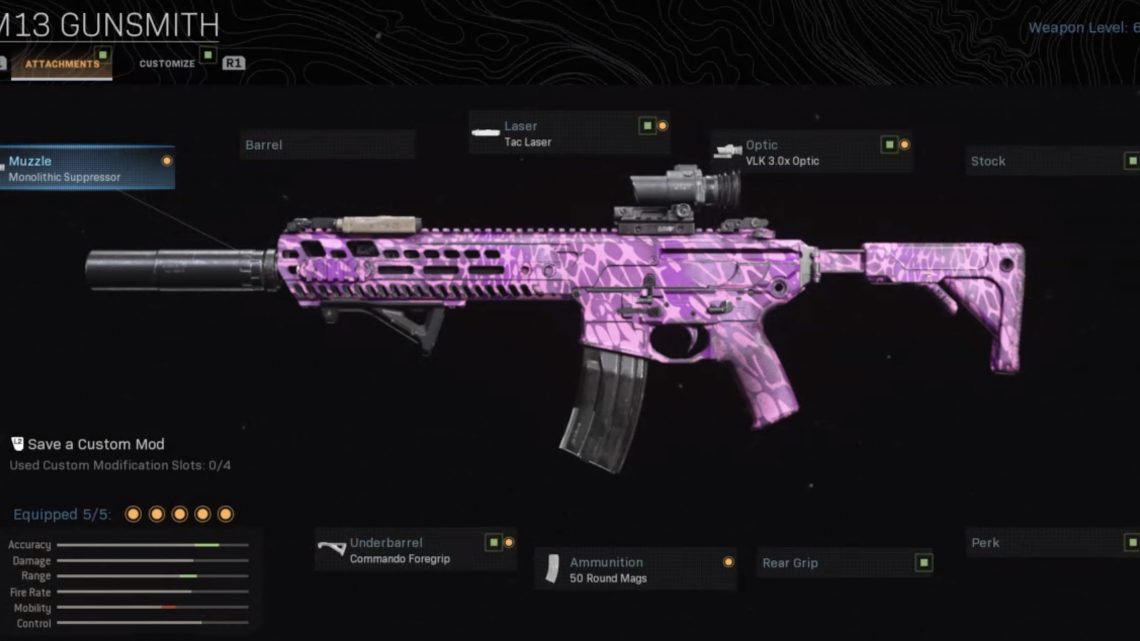 The Best ‘Call of Duty: Warzone’ Season 4 Loadouts, According to People Who Win Sometimes

For the last three months, some of the reporters and editors of Motherboard have been obsessively playing Call of Duty: Warzone on a near-nightly basis. As we’ve previously noted, it’s a great way to stay connected in a world that’s been flattened with constant, exhausting Zoom calls. It’s also a way to get a brief respite from a world that’s been terrorized by a global pandemic and police violence.

Besides playing far too many hours and constantly tweaking our own loadouts, we’ve also read countless other "best loadout" articles and watched YouTubers like JackFrags and BennyCentral discuss their favorite Warzone loadouts and best Warzone strategies. Lots of the advice in those articles and videos is great, but, honestly, picking a Warzone loadout is about figuring out what you personally feel comfortable with and tweaking it as you go; there’s no one-size-fits-all answer. Lots of people are running Graus with iron sights, but if you suck at aiming, there’s no shame in using an optic—not everyone is a pro-level player (and we certainly aren’t). There are also a few different perks you can use that, depending on how you play, will make you more resilient in Verdansk.

The Warzone meta has changed dozens of times over the few months we’ve been playing it—RPGs have been nerfed, everyone is running a Grau, and the season 4 introduction of the Fennec puts it in contention with the MP5 and MP7 as best close-range SMGs in the game.

What we're saying is this list is subject to change, and while we're far from pros, we've dumped enough hours into the game to become somewhat good at it. We win sometimes—Emanuel and Joseph have in the neighborhood of 15 wins apiece, and all of us have spent far too much time thinking about what the best Warzone loadout is. Here’s what the Motherboard staff’s current loadouts are, why we use them, and a few tips we’ve picked up along the way.

An M13/Fennec loadout, and quick weapon swapping with Amped 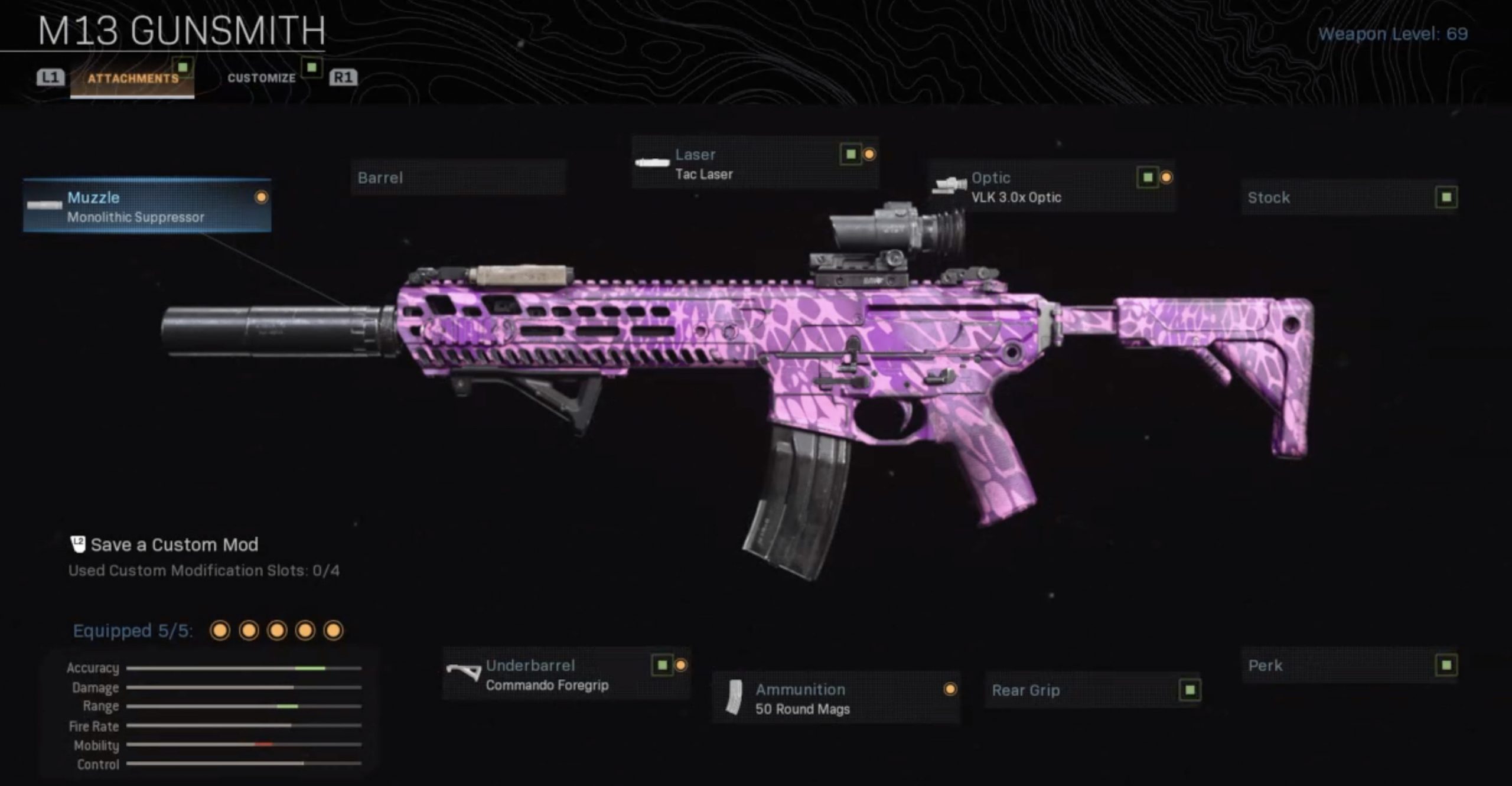 After countless hours with a failed SMG-only build and a misguided attempt to use the powerful-but-difficult-to-use Scar, I have settled in nicely with the M13, which has an SMG-like fire rate, barely any recoil, and better range than SMGs. I think it’s the cheap-man’s Grau, but I didn’t get multiplayer until recently, so I still haven’t unlocked and leveled up the Grau. The monolithic suppressor is key to extending your range and staying off the minimap when you fire. I like the Tac Laser as it lets me lock on to targets much faster (and is only visible when I’m aiming down sights), and the 3x zoom optic lets me hit targets that are far away without impacting aim down sight speed too badly. I think the M13 is a great build with the Fennec, for reasons I’ll explain in a moment. 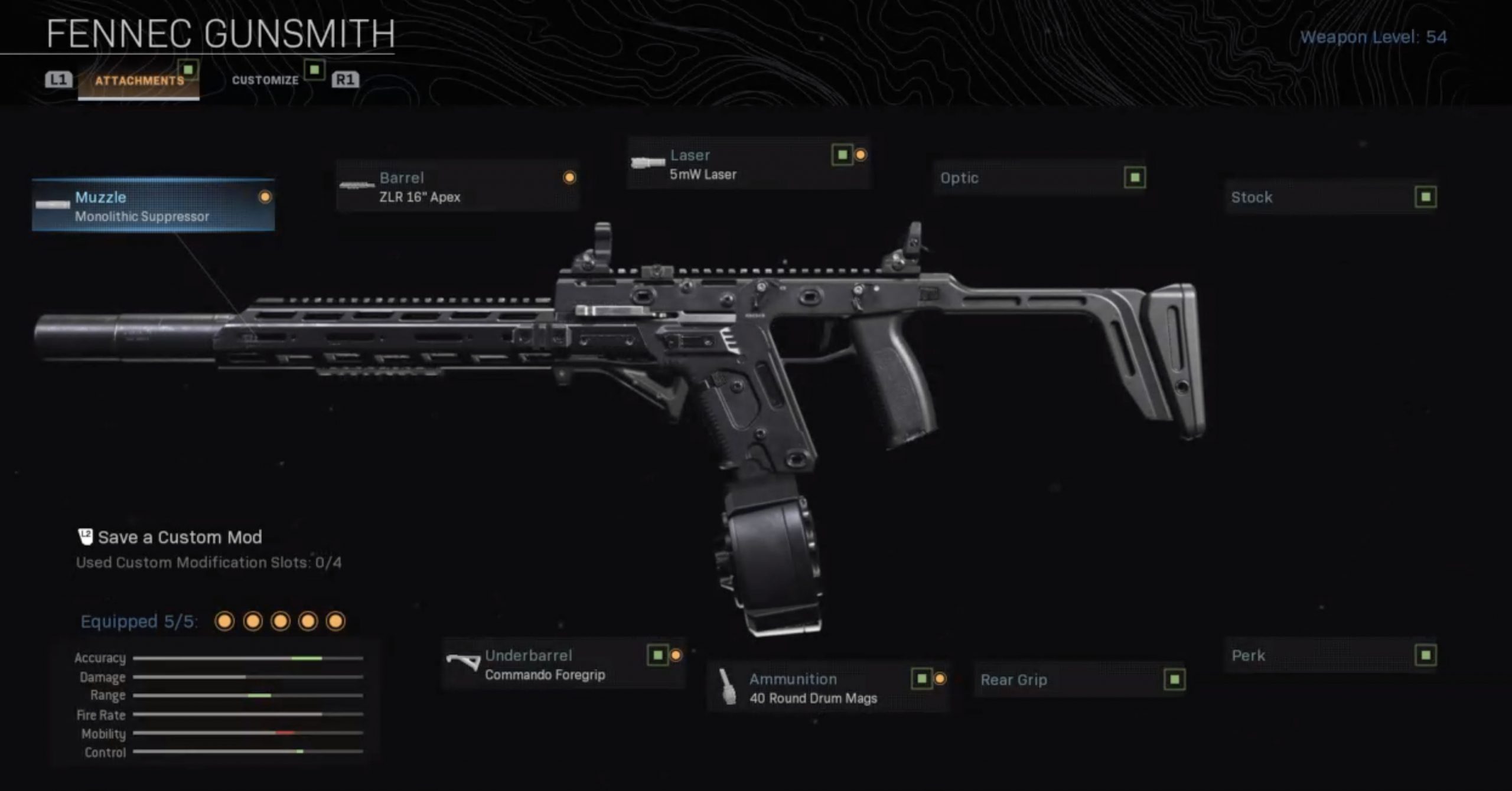 The Fennec is my new "fuck you" gun. Its fire rate is insane, it absolutely shreds people inside buildings and at short distance, and is accurate enough with the laser to fire from the hip, but fast enough aiming down sight to be useful there, too. So far, I’m liking it better than the MP7 because it feels like it kills faster to me—in one-on-one situations, I’ve killed many folks who came at me with an MP7. There’s a few things I want to note about this gun and my loadout in particular: The 5mW laser is visible, which is why I call it a fuck you gun—it kills so fast that the goal here is to simply destroy other players even if they know you’re there. The Fennec’s biggest downside is that it reloads slow as hell; the sleight of hand gun perk helps this somewhat, but instead I’ve opted to run overkill and amped as two of my loadout perks. This means you can kill someone with the Fennec, and essentially instantly switch over to the M13, which has an excellent fire rate. You don’t want to be reloading the Fennec at all in the middle of a gunfight, so the move here is to switch back and forth between the guns, and hope you’re able to kill whoever you’re fighting to give you the breathing room to reload.

Like I think everyone else I play with, I use C4 because of its flexibility—the Amped perk also lets you throw C4 faster, which is invaluable for clearing out rooms or blowing up trucks. I have recently been experimenting with flash grenades instead of the heartbeat sensor, because so many people are using Ghost, but I’m thinking of switching back.

A Kilo with Ghost 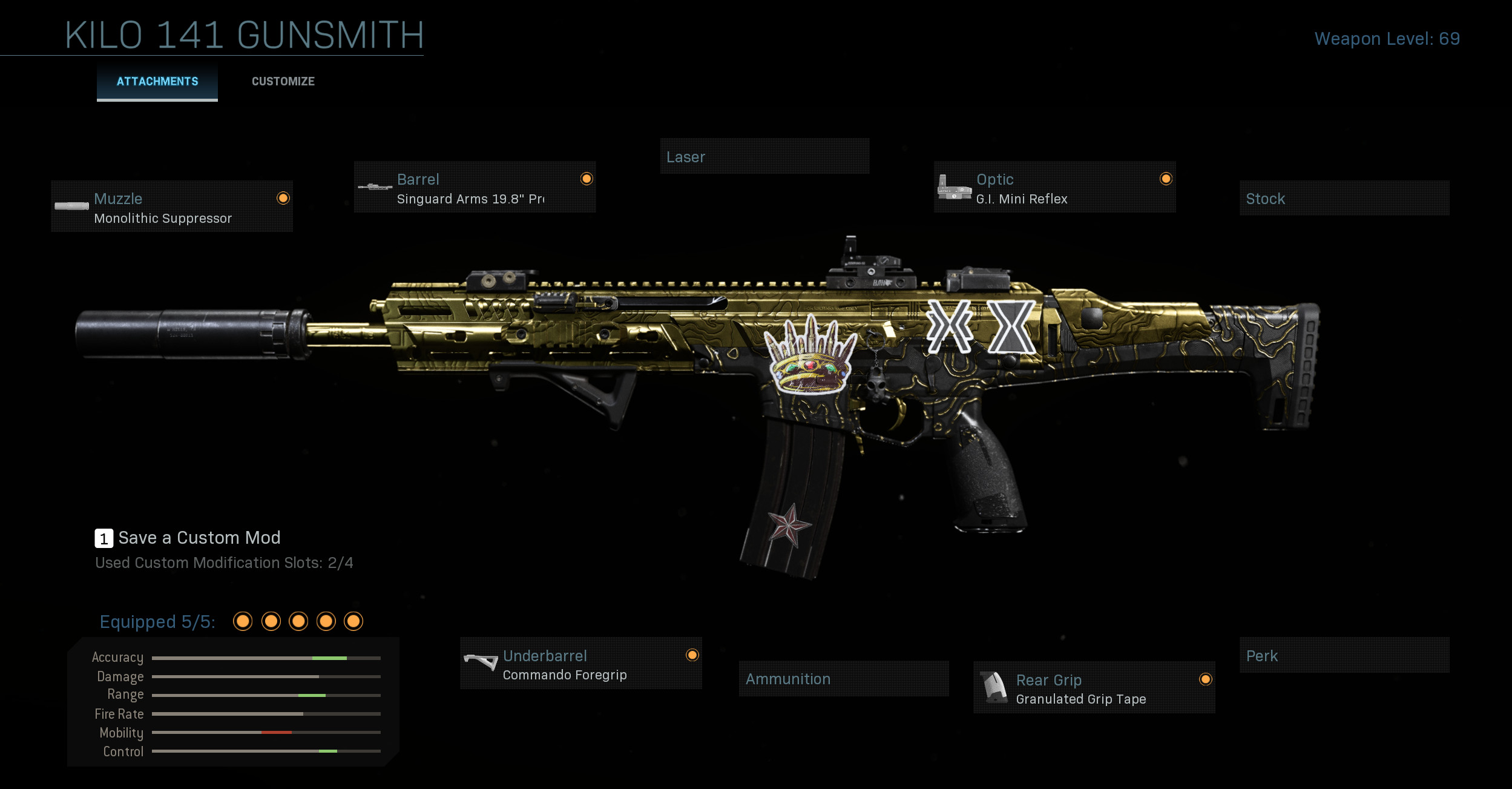 Call of Duty YouTubers and gaming blogs will offer endless reasons for why you should use this or that gun, which guns have the least recoil, shortest time-to-kill (TTK), or why the meta demands you'll use a particular attachment. I find that ultimately people are best with the loadouts they're most comfortable with, which is why I use the Kilo. It's the first assault rifle the game throws at you, and at this point I've probably used it for more than a hundred hours (RIP). I know its recoil pattern and effective range, the attachments I have increase accuracy so it's perfect for mid-range, and the suppressor just keeps me from showing up on other players' mini maps when I fire. 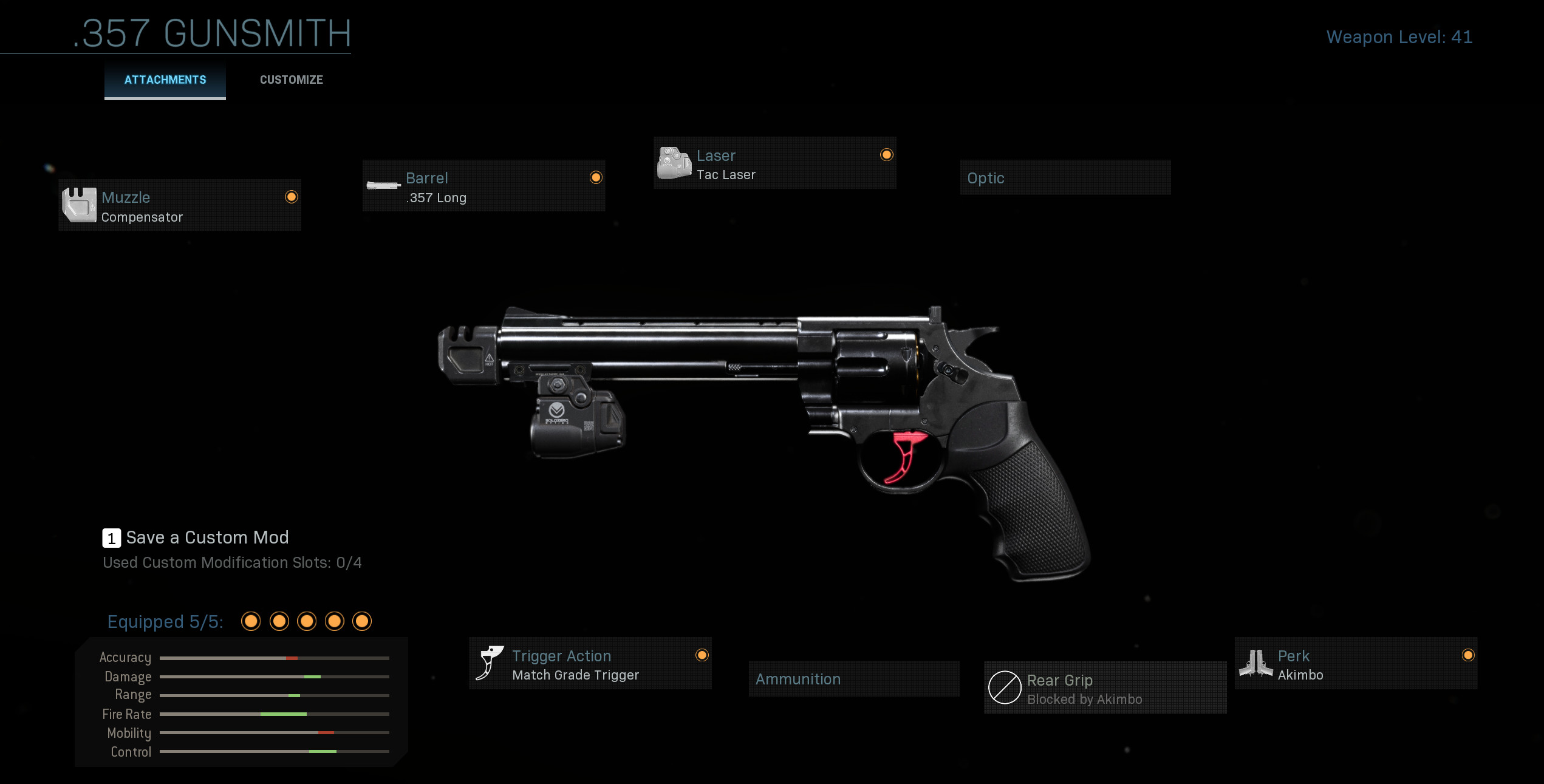 I have not killed a single person with this secondary. In fact, I'm not even sure I attempted it. But running around with a long revolver in each hand, a laser pointing out of each, is cool as hell. I look completely deranged, like a tactical Yosemite Sam. The real practical advice here is to just pick up a better secondary in-match, ideally a gun that uses different ammo and compliments the Kilo by being better at either longer or shorter range. 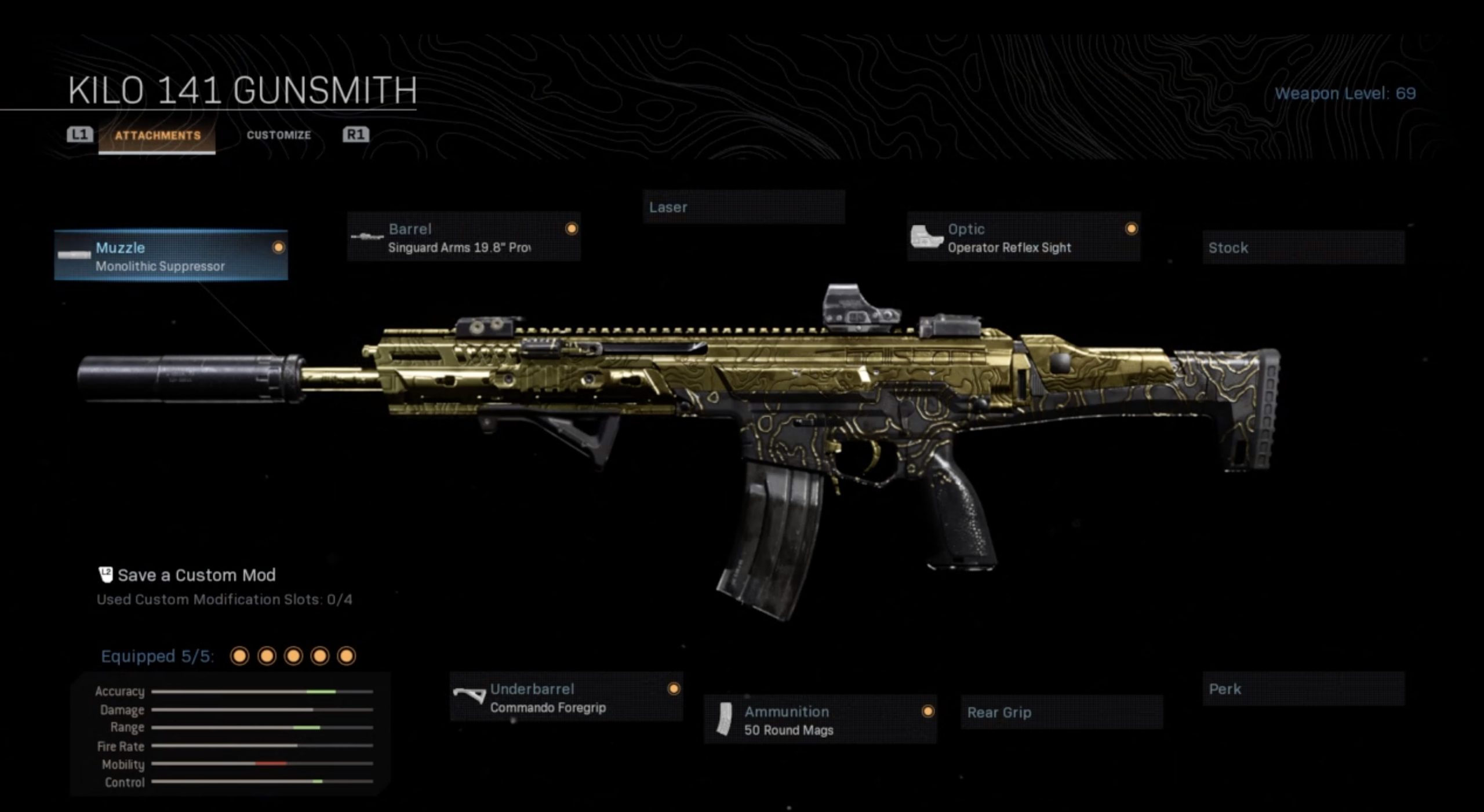 I don’t get the hype around the Grau. Sure, the iron sights are good enough that you don’t need to attach an optic, the low recoil is useful, and since everyone runs with it you can regularly just loot someone’s corpse for a kitted-out gun if you’re hard-pressed for a weapon. But it just doesn’t have the same punch as the Kilo. Instead, for me it’s the Kilo with a 50-round magazine. With 50 shots, it feels much easier to take on a two- or three-person squad without having to fiddle around with reloading while being shot in the face. More than anything, the Kilo is just the first gun I invested proper time into, so I’m used to controlling the recoil most. 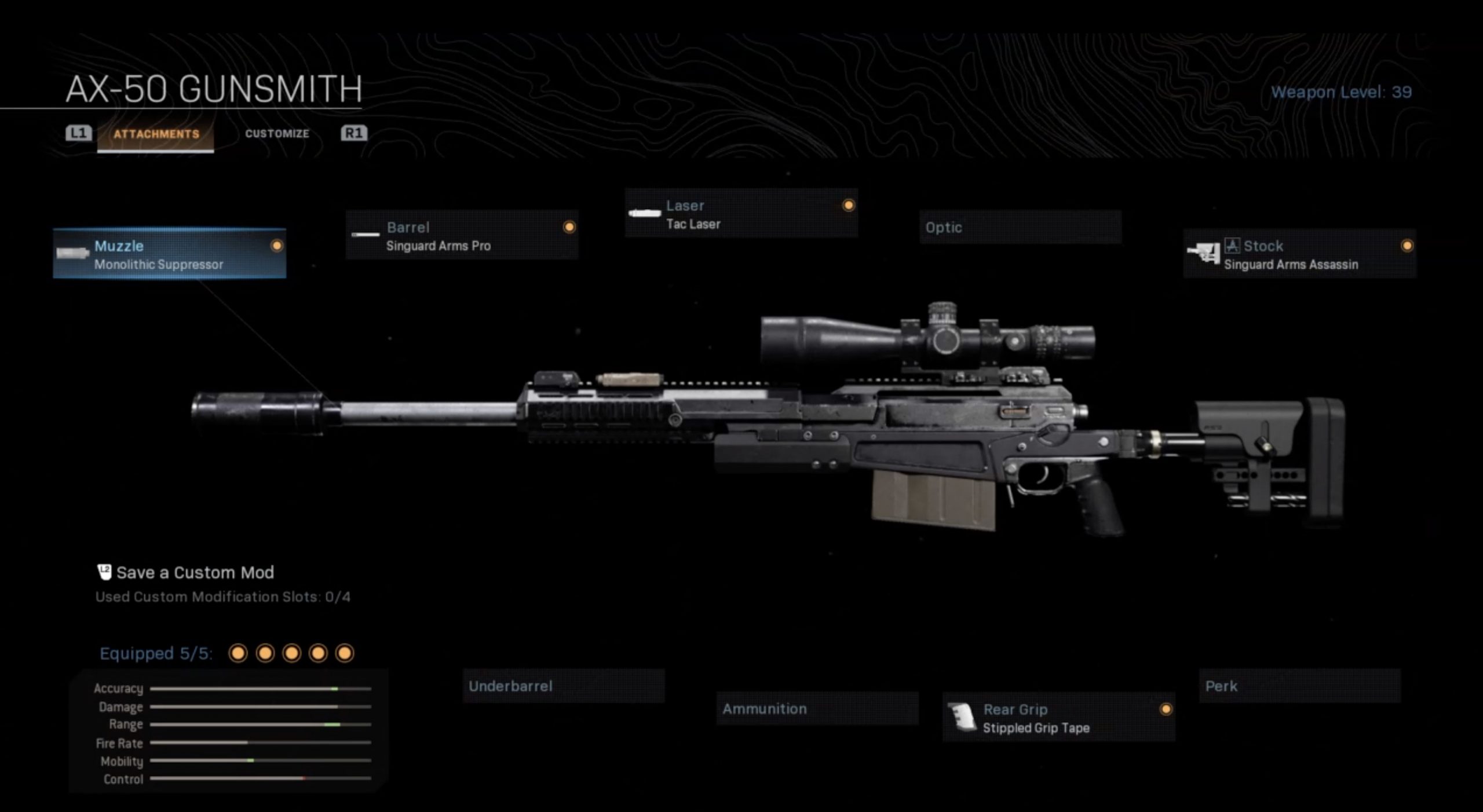 I keep the Amped perk to quickly swap to the AX-50 sniper, and have the weapon setup to get a good, balanced aim-down-sight speed. Typically try to grab a second loadout for Ghost half-way through the game.

Heartbeat Sensor is a must in solos or duos, and C4 still works well even if everyone seems to have caught onto the idea of if you’re driving a car without a trophy system, avoid someone holding explosives at all costs.

Grau and RPG for psychological warfare 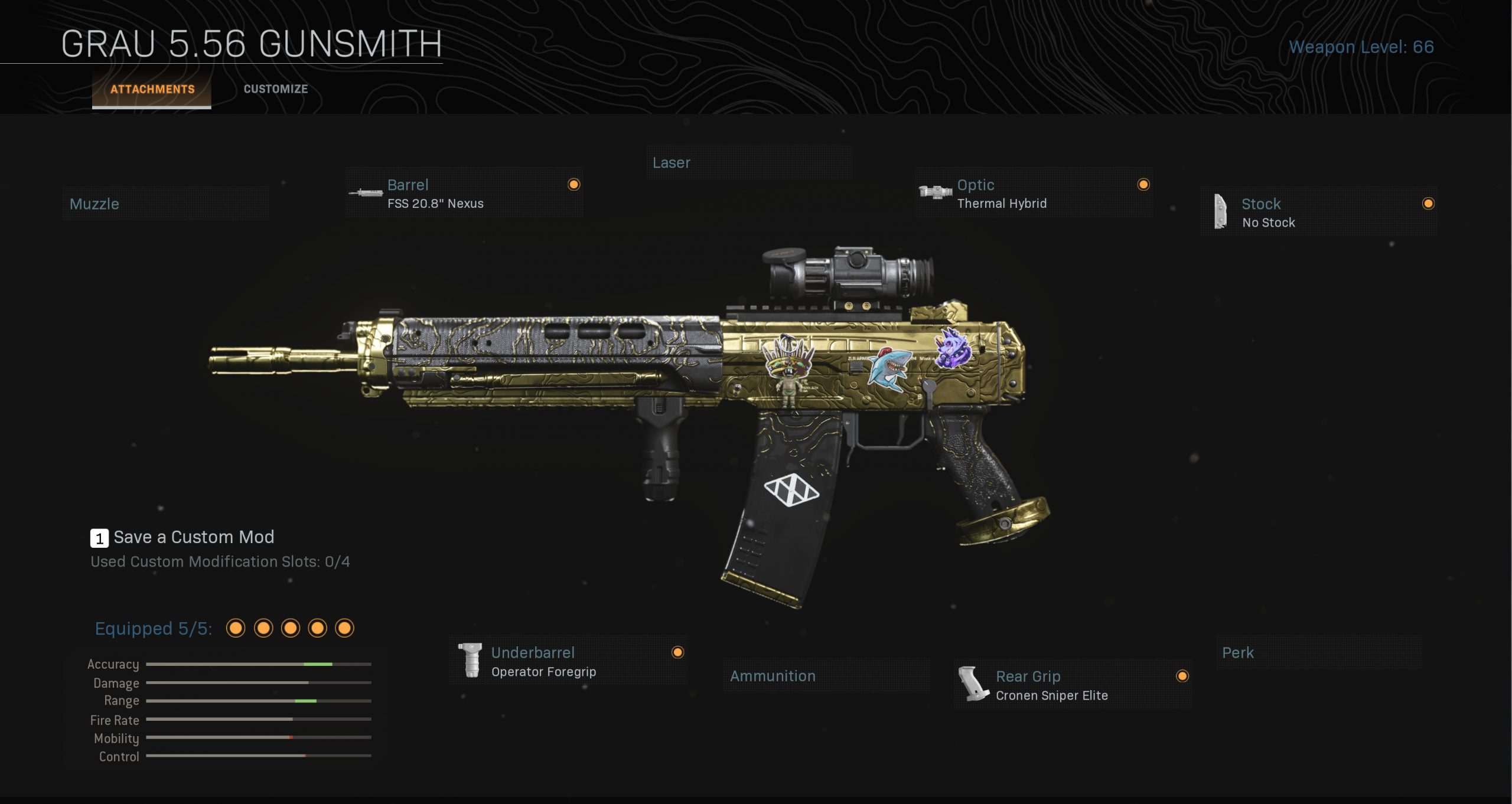 Yes, I run a Grau, and yes, it even has a gold skin. I don't care, because it's pretty much unbeatable. The thing about a Grau is that it has excellent overall stats and low recoil that makes it a rare "laser," but it's how you tweak it that makes it shine. My Grau, for example, has several attachments that give accuracy and range a huge boost, while adding a "no stock" option that still lets me pull it up immediately. The result is a weapon that is capable at longer ranges but is also fearsome in close quarters. Accentuating this versatile capability is a medium-long range thermal scope (perfect for scanning rooftops and houses) that has a side-mounted holographic scope. Yes, cast-aside Graus litter the landscape of Verdansk, but I don't want just any Grau, I want my Grau. 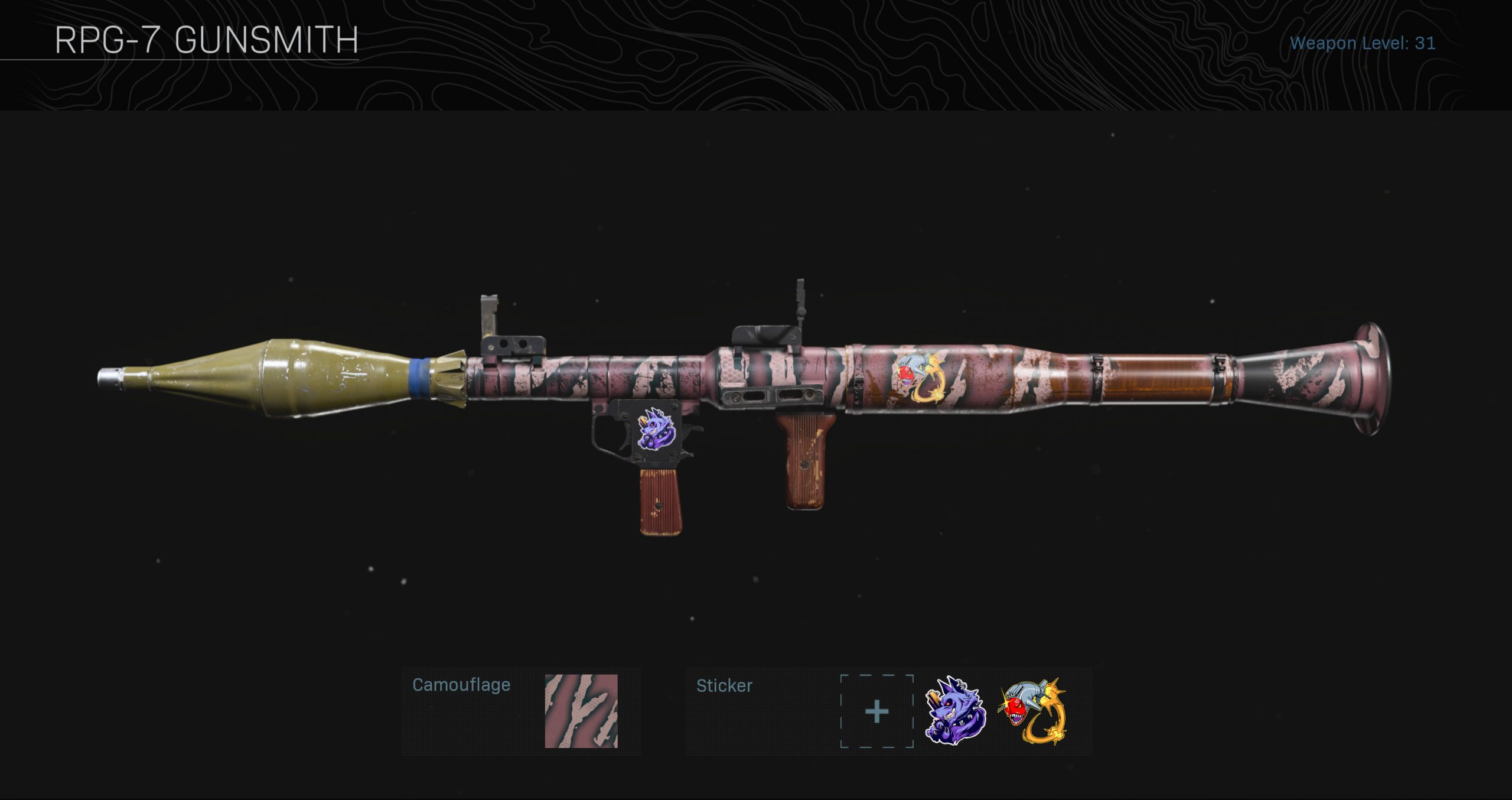 The RPG-7 was nerfed during a previous update, but I still find it useful both to get kills and as a weapon of psychological warfare. The RPG-7 still, almost without fail, will send your foes running in the other direction.

C4 is far more deadly than the RPG-7 in many situations and worth keeping around (much better than a grenade, because you can set traps), and a heartbeat sensor can be the difference between life and death when storming a building. As for perks, I run cold-blooded because as a thermal scope user I don't ever wish to be in someone else's sights like that, ghost for stealth from UAVs, and amped.

Nyjah Huston First Appeared in Tony Hawk at 11 Years Old. At 25, He’s Back.