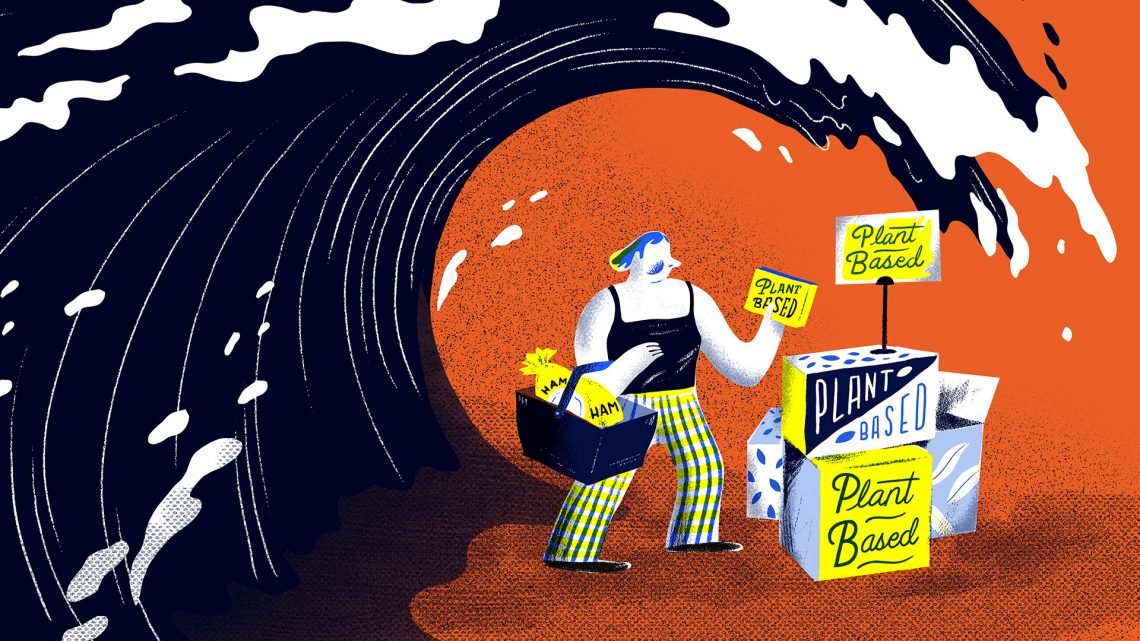 Isn’t It Bad to Eat Meat When the Planet Is Dying?

First of all, I wanted to say thank you - your advice is some of the most scientifically solid, grounded and compassionate advice on the Internet when it comes to fitness (especially when it comes to women's fitness). Thanks for being no bullshit, but also incredibly kind to us.

Second, I've had a question percolating. I know in the past you've covered food/diet changes for lifting (more protein, eat carbs). However, as a (soy-intolerant, pea-protein hating) someone who has started to seriously question the environmental sustainability of my diet, I was wondering how you reconcile your dietary needs and planet health. I know whey protein is a pretty efficient source of protein in terms of human health and emissions (although cheese and most dairy/cows are not), but eating lentils and quinoa-based meals and chasing them with whey protein seems like a stupid way to live.

Sorry if this a fuzzier, more philosophical question than you would like to answer—I'm legitimately just curious about your views and I think it would be good to have a non-vegan lens on this issue. —Alison

Even as I continue to express my climate anxiety in increasingly odd and relatively meaningless ways—standing in front of a beverage case at the grocery store for minutes at a time battling guilt over buying a slightly better beer in bottles versus a worse one in cans—I give little thought to eating animal products.

One reason is that, while I do eat meat, the amount I eat aligns already with the recommendations of environmentalist spokespeople who are gently imploring Americans to eat less meat; they’re trying to talk people down from eating meat with seemingly every meal to eating it once a day, or only several days per week. I eat meat a few times a week to once a day; I also eat eggs, cheese, and yogurt, and I drink milk. Often, the products I buy are on the more responsibly-sourced end, but not always. My understanding is that if America has some real problem children as far as animal product consumption, I’m not one of them.

But I also think about this in a more systematic way, especially as so many of us are constantly anxious about getting enough protein. I do think the future for food rests with alternative, non–factory farm and plant-based protein sources, and I am personally ready to eat burgers made exclusively of crickets. But quietly buying them as alternatives now won’t get us there, and, more importantly, individuals’ doing this does not make an even remotely substantial-enough difference to course-correct the state of the environment. We need the unsustainable food sources and markets that trade our livelihood for profits litigated out of existence on a grand scale, which is not something that happens by us not buying those foods sometimes, or even all of the time. As things continue to get colossally worse, it’s more important than ever to be honest with ourselves about what is little more than attempts at personal absolution, what is just allowing marketing to prey on our collective guilt, and what is best for the planet.

What is important is that that infrastructure is sustainable, and we can only achieve through sweeping legislative change, not which meat we buy this week. Individual action through personal consumer choices in a vacuum is fine, but in cultural context, it’s a manipulative blame-spreading tactic similar to “productivity” and “life hacks” pushed on us by a capitalist system. The impact of even absolutely everyone switching to a plant-based diet (knocking off 0.7 percent of global emissions) is minuscule compared to, for instance, regulating the 100 companies responsible for 71 percent of emissions, a fact that those companies and many others work very hard to make us forget by distracting us with the latest burger made of textured wheat protein.

That doesn’t mean we’re absolved, by any stretch. But it’s my belief that it’s far more important for me to spend less time fretting over soy vs. chicken and more time on the bigger picture.

To illustrate this idea, let’s say there is a waste dump that is extremely close to your neighborhood, and it’s become so large and toxic that it’s starting to contaminate the groundwater, directly affecting you and everyone else who lives in the neighborhood. Three percent of that dump is the garbage everyone in the neighborhood puts in the dump, and 97 percent is the toxic waste from a local factory—let’s say they’re putting 97 tons of waste in there per year. You could put in, let’s say, an extra 10 hours a week of your time making sure your own house is absolutely garbage-neutral: you take the time to use reusable bags, buy nothing that generates waste or packaging, repurpose any waste you do generate you into fashionable clothes for your children like a discarded-frozen-fruit-bag vest, you compost, the whole nine. Any of those 10 hours that are left over, you use to hector your neighbors into doing the same thing, with mixed success. Even if you get everyone’s buy-in, the waste in the dump is only ever going down by 3 percent, from 100 tons to 97 tons—not nearly enough to stop the water contamination problem. However, your personal action leaves you sort of satisfied that you didn’t do nothing.

Now let’s say that, instead, you continued to generate your own waste same as before and accepted the idea that whatever you contributed to that 3 percent is negligible compared to the much larger effect of the dumping corporation. Now you take those 10 hours of time to lobby your local government to make the corporation stop dumping its waste in the landfill, and use some of that time to get your neighbors to organize as well. After some coordination, the corporation reduces its waste, let’s say by half, to 48.5 tons from 97. Maybe your local government even shuts that company down, and uses subsidies to replace it with a completely green alternative that produces as much waste as all of your garbage-happy neighbors. Now your groundwater is way, way safer, even though you personally did nothing to manage your own contribution to it. Here you also feel satisfied that you made a difference, but you made a far, far bigger difference with the same amount of investment.

My presumption here is that our capacity in terms of time, attention, and patience for affecting change is finite. It’s extremely important not to confuse what makes us, as individuals, feel assuaged that we Did A Thing with what is actually a good use of that finite time, attention, and patience. Some people have time and money to only source and buy organic, sustainably raised foods, and compost, or like, never use air travel. Bully for them. I don’t, and I think most people also don’t. (Even the people who can, mostly don’t; even this guy advocating for individual action points out that the wealthiest 10 percent of people are responsible for the vast majority of emissions. There is no ceiling for how much the rich should worry about individual action, in my opinion).

You can spin in your own hamster wheel of personal action and spend your disposable income on alternative meats or walk through the neighborhood picking up trash—that has a concrete impact! Microplastics entering the environment are bad! But is that as good a use of your time and resources as, say, canvassing for or donating to a politician who will make actual strides in regulating big oil corporations, or investing in green energy, or forcing factory farms out of business and subsidizing sustainable small farms?

There are always going to be noisy people who are going to be like, But can’t you do both? Can’t you go broke at Whole Foods out of abstract guilt over the source of red meat, AND canvas for a politician? Like, sure, you can. But if you’re grinding away at a job you hate to try to earn a decent income where the only earth-friendly gesture you have bandwidth for is buying frozen meatless crumbles instead of tri-tip, I’m not sure you’re asking yourself the right questions about the direction the planet is going and your place in it.

I don’t know if people have noticed, but none of us have any money. As wages stay flat and taxes stay low for rich people and relatively high for middle- to low-income people, our capacity to vote with our dollars goes down every single day.

We are at a dire-enough stage of climate crisis where individual action is not going to be enough to substantively change the course we’re on. That opportunity passed some time in the late 80s. (And honestly, it’s debatable it ever really existed, given the amount of obfuscation energy companies were doing around climate science; they’ve known they were lining us up for absolutely massive problems and have been sweeping the whole thing under the rug since the late 70s.)

It’s true that we need absolutely everyone behind the climate crisis, but we’re now in triage mode. It’s in the same way that we don’t need to be better at our jobs through life-hack tweaks as wages remain flat and the exuberantly wealthy’s taxes continue to go down—what we actually need is our fair share, and big corporations and rich people need to pay up. We need to focus on the people (businesses) largely responsible for the state of things.

As you point out, whey protein is probably not great environmentally, being that it’s derived from the same animals causing emissions concerns, plus it creates a significant amount of acid waste that we currently have no use for. So if you’re trying to hit a protein count, particularly if you are intolerant to the usual vegan sources of protein (there is hemp protein you can try, and rice protein, and, god, I might have seen “coconut protein” once but who knows if that’s any use at all), you’re already in for some measure of planetary ruin. Embrace it, I say, but with the knowledge that you have a greater duty to support infrastructural change such that the responsibility of “saving the planet” doesn’t fall to the personal retail choices of you, a hapless non-ruling-class consumer.

It might surprise you to hear after all this that I don’t even like meat that much, and I’m super picky about it. It’s gross to handle raw, and generally makes a lot of mess when you cook it. If a nice steak ends up in front of me, I will be really happy, but that’s expensive, and I don’t love or even need it enough to make it myself except extremely rarely. Cheese, eggs, and milk I’d be far sadder to lose. But I’m going to continue to eat them while I focus on my bigger goal to change the system, which I find much more satisfying and which helps me sleep far better at night than sanctimoniously buying various forms of soy.

Disclaimer: Casey Johnston is not a doctor, nutritionist, dietitian, personal trainer, physiotherapist, psychotherapist, doctor, or lawyer; she is simply someone who done a lot of, and read a lot about, lifting weights.
You can read past Ask A Swole Woman columns at The Hairpin and at SELF and follow A Swole Woman on Instagram. Got a question for her? Email swole.woman@vice.com .

US Complains as Cambodia Pivots Toward China

Biden Effectively Has an Outright Majority of Delegates So Far