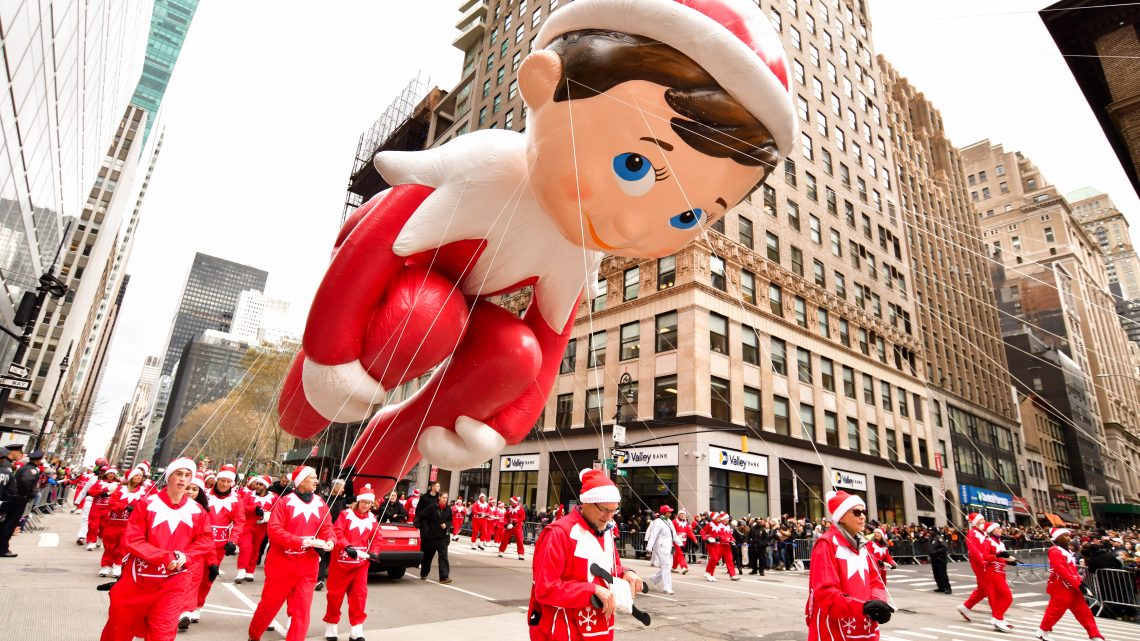 How Elf on the Shelf Became a Surveillance State Apparatus

Dr. Laura Pinto, whose research focuses on educational policy and practice, was among the first to shine a light on one of the strangest and most disturbing toys on the market, the Elf on the Shelf. Starting with a video connecting the toy to Foucault’s writings about surveillance, her 2014 article (co-written with Selena Nemorin) for the Canadian Centre for Policy Alternatives became that rarest of creatures: a largely academic paper about ideas that entered the cultural narrative.

The Elf on the Shelf is a recent creation, and its story is so specific to this era that none of it—the product itself, the dialogue about it—would make any sense in any other time. The Elf on the Shelf is a book of branding, self-promotion, the surveillance state, educational philosophy, social media, and performative parenting. It is a goddamn nightmare and it should freak you out.

The Elf in question is a small elf doll, accompanied by a book, that parents move around the house each day of December, leading up to Christmas. Written and self-published by Carol Aebersold and her daughter Chanda Bell, the book was first released in 2005, and took off in 2007. The story in the book, written in rhyme, reveals that the elf doll is an emissary sent by Santa Claus to observe children and report back on their behavior for judgment. The elf cannot be touched or the magic will be broken; it is a silent observer, a CCTV camera with pointy ears.

Pinto’s article discussed the issues of introducing small children to the concept of perpetual surveillance. “The theoretical foundation behind it is that when kids play with toys, they’re creating a pretend world, but they’re also reinforcing values and behaviors,” says Pinto. Living in a state of constant spying is something adults deal with every day, and education and awareness about the dangers of surveillance is certainly lacking, but the Elf on the Shelf presents the concept uncritically. “When you convey to kids that what's normal is somebody will be watching you and reporting back to authority figures and you'll be punished or rewarded accordingly, that's something to be wary of,” says Pinto.

The Christmas holiday has, of course, a much older and more established central mythological figure, in the form of Santa Claus. The research on the psychological effects of the Santa myth is distressingly slim, but I spoke to Jacqueline Woolley, a psychologist at the University of Texas at Austin, who conducted research on whether and in what form kids believe in Santa. There’s no conclusions about whether telling your kids that Santa exists will have any lasting psychological effect on them or the way they’ll see the world, but there are a few intertwining concepts.

“I think believing in an impossible being like Santa Claus could possibly exercise a child's counterfactual reasoning,” says Woolley. Counterfactual thinking is the human ability to imagine a world that doesn’t exist in reality, but not in a Lord of the Rings kind of way. It’s more about following pathways of acts that never happened. What if I had done this, instead of that? What would the ramifications be? And exercising that is an important part of cognitive development; it helps a person understand the effects of their actions in the future. Of course, kids have plenty of non-Santa stuff that would exercise that, too.

But getting back to the elf, there’s also the aspect of surveillance to Santa. He knows whether you’re naughty or nice, somehow, and he’s going to reward or punish you based on what he knows. That kind of system is called an extrinsic reward system, as opposed to an intrinsic reward system. If you get a gold star for reading a book, that’s an extrinsic reward which is designed to encourage more reading. If you decide you like to read books, and that’s why you want to read more books, that’s an intrinsic reward. It gets more complicated than that, but that’s the basic idea.

It’s not really fair to generalize and say that one of those methods doesn’t work, but it’s probably fair to say that the general understanding is that extrinsic rewards tend to be more short-lived and unsustainable than intrinsic rewards. That isn’t always the case; a gold star for reading might get a child to start reading, and that child may find they enjoy reading and want to keep doing it. But it’s hard to apply that to what the elf does; no child is going to find that they enjoy behaving and doing what their parents say so much that they want to keep doing it. “From a broader perspective, I don't think these kinds of things are the most effective way to mold your child's behavior or moral sense,” says Woolley.

But Santa is pretty different from the elf. Santa might be an omnipotent spy, but he’s also associated with generosity, kindness, warmth, family. The Elf on the Shelf has none of this, aside from any tangential effects coming from being part of the Christmas celebration. The elf is solely an indicator of a surveillance system, a dark and ominous warning and, very clumsily, an analogue for tech giants and overstepping governments.

Pinto’s article was picked up, first by the Toronto Star and then by American outlets including the Washington Post and Drudge Report. The Washington Post article carries a tone of disbelief that someone had spent so much time thinking about an innocent toy. “Before you burst out laughing, know that Pinto comes across as extremely friendly and not at all paranoid on the phone. She’s also completely serious,” writes Peter Holley. The story was incredibly popular; the Columbia Journalism Review said it was the Washington Post's most-read story of the year.

“What we wrote was oddly controversial in 2014,” Pinto tells VICE now. “The reaction was a little bit weird. We were kind of like, ‘Oh no, what do we do, they're painting us as crackpots.’” But a groundswell of anti-Elf writing had already begun to spring up with a couple of other articles on the topic, and within only a few years, think-pieces and even Amazon comments had begun to turn against the elf.

This did little to stop the elf’s rise to Christmas prominence, because fear is a much lesser motivator than self-promotion. Today if you Google “elf on the shelf,” mostly what you’ll find are slideshows and Pinterest boards of hundreds of social-media-focused elf ideas. These are often completely bizarre. You can find hand-crafted outfits that turn the elf into a coffee-slinging employee of Starbucks. Parents create elaborate tableaus and dioramas for the elf, like this one of a “sick elf” that includes “reindeer flu pills” and a forged doctor’s note. Or, in a take that’s a little too on-the-nose, they’ll dress the elf up like a cop.

The elf sparked competitive wars of which parent can create, and post on Instagram and Facebook, the most elaborate elf presentation. The more favs you get, the better a parent you are it seems. Mommy bloggers felt forced to participate in the elf wars, promoting their brand as quirky parents who have the time and energy to spend hours on an elf photo booth with a couple of Barbies.

The elf is not the only form of surveillance that a child will encounter early on, not even if we discount the obvious stuff like smartphones. There’s also ClassDojo, which provides live-streaming video of classrooms for parents to watch, complete with “behavior points” that can be awarded for doing homework, or taken away for being a little jerk.

ClassDojo also creates and stores a massive database of information about students on a much more granular and searchable level than had ever been available before. Remember that whole thing about your “permanent record” which never actually existed? Now it does, and it includes data about how often you played desktop soccer with your soccer-ball-shaped eraser instead of learning about the Smoot-Hawley Tariff Act.

There’s an argument to be made that surveillance is going to be a part of every modern child’s life, and that shielding them won’t do them any favors. That’s a lousy argument because there’s no reason for us to blindly accept this garbage, but it would also require some pretty complex discourse between parent and child about what this elf is really doing. That might be a good thing; the elf is, after all, a very easily understandable demonstration of a modern surveillance state. But parents would have to spend some of their Christmas break talking about the dangers of data gathering instead of creating a tiny fishing rod that the elf uses to catch Goldfish crackers.

‘Death Stranding’ Had the Video Game Mechanic of the Year