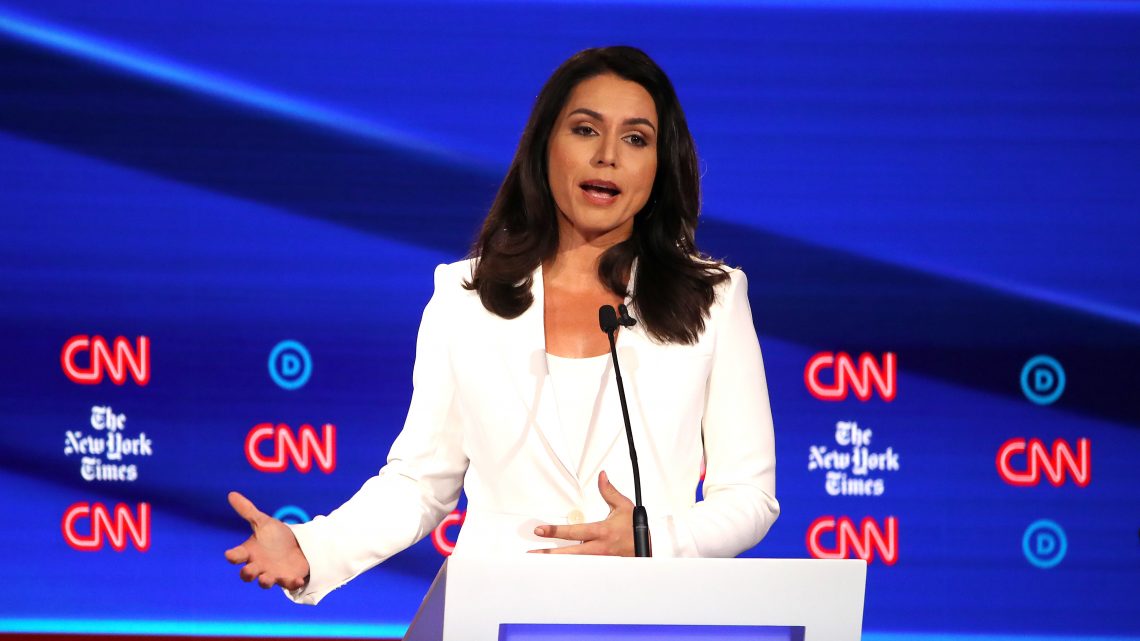 Tulsi Gabbard’s Stance on Abortion Is Stuck in the ‘90s

Reproductive rights advocates had some reason to celebrate during Tuesday night’s Democratic debate, which was the first to feature a direct question about mounting threats to abortion access in the United States.

But that excitement was quickly dampened by the answer of one of the candidates: Rep. Tulsi Gabbard (D-Hawaii), who resorted to a controversial decades-old talking point that pro-choice supporters say only further stigmatizes abortion at a critical moment.

When moderators asked what candidates would do to stop the recent wave of abortion bans if elected president, Gabbard responded by referencing a phrase first popularized by the Clintons in 1996.

“I agree with Hillary Clinton on one thing. In the 1990s, when Bill Clinton was president and she said abortion should be ‘safe, legal, and rare,’ I think she’s correct,” Gabbard said.

But that phrase—“safe, legal, and rare"—was questionable even back when the Clintons first used it to describe the Democratic Party’s position on abortion in the 1990s.

The phrase marked a significant departure from earlier rallying cries like “abortion on demand, without apology” that once prevailed among pro-choice supporters. Katha Pollitt, the author of 2014 book Pro: Reclaiming Abortion Rights, has described the Clintons' decision as a moment that helped usher in the “awfulization” of abortion, by which she meant referring to abortion as something regrettable, unfortunate, and to be avoided at all costs.

Reproductive rights advocates said this tendency was on display Tuesday night, when Gabbard hearkened back to the Clinton-era stance.

“I cannot think of a less compelling way to advocate for something than saying that it should be rare,” said Amelia Bonow, the cofounder of Shout Your Abortion, a platform for abortion storytelling. “And anyone who uses that phrase is operating from the assumption that abortion is a bad thing.”

In the most basic sense, it’s simply not true that abortion is rare, Bonow pointed out: About one in four women in the U.S. will have one by age 45. Among those who have already had an abortion, hearing Gabbard's argument was painful, said Alison Dreith, the director of Illinois’ Hope Clinic.

“People who have had abortions are not here for that answer,” Dreith said. “I am one of the women who has had an abortion in my lifetime and I think it’s deeply offensive and stigmatizing.”

Though Gabbard echoed other candidates’ support for the codification of Roe v. Wade into federal law, the comment made it clear Gabbard is out of step with her fellow 2020 contenders, Dreith said.

Gabbard added that she would also ensure that “abortion is not an option in the third trimester, giving into anti-choice fear-mongering around so-called “late-term abortions.” This cycle, presidential candidates have begun to take bolder pro-choice stances on abortion rights on the whole, making Gabbard’s use of the line “safe, legal, and rare” feel especially dated.

Earlier this year, former Vice President Joe Biden came under fire for reaffirming his support for the Hyde Amendment, which bans federal funds from going toward abortion services in the U.S—and essentially amounts to a ban on abortion for low-income Americans. Biden later reversed his stance, demonstrating that supporting a repeal of the 1976 amendment had become something of a litmus test for 2020 candidates.

“Advocates have long been really pushing this message of how important overturning the Hyde Amendment is,” Dreith said. “That is not a fight that even advocates in our own movement thought was doable, and look where we’re at now.”

But while Gabbard’s call back to “safe, legal, and rare” may have seemed out of place on the debate stage, reproductive rights advocates say the Democratic Party and the abortion rights movement more broadly have yet to fully embrace an unapologetic stance on the issue.

“The popular consensus is that ‘rare’ is stigmatizing and as a movement we sort of pat ourselves on the back at the idea that we’ve traded it in for ‘safe, legal, and accessible,’” said Robin Marty, author of Handbook for a Post-Roe America. “But the reality is that it’s still there, lingering in the back of the reproductive rights movement’s language even if the word ‘rare’ itself is no longer used.”

Marty said she noticed the phenomenon just recently, when a new report showed that abortion rates in the U.S. have continued to decline, reaching a record low.

“Both the right and the left scramble to be the first to claim that it’s their policies—more birth control access or more abortion restrictions—that brought those rates down,” she said.

And on Tuesday night she also noticed many 2020 Democrats shy away from using the word “abortion,” instead preferring terms like “reproductive healthcare” and “reproductive freedom,” which some say is a way of avoiding talking straightforwardly about the procedure.

With Roe v. Wade under direct threat—the Supreme Court recently agreed to hear its first abortion-related case—Marty and others agree it’s critical that Democrats coalesce around strong messaging in favor of abortion rights.

If the party tiptoes around the issue, it has already conceded, she added.

“What we need to win this fight is to create a culture where people can talk openly about the way abortion has helped their family, their community and allowed them to live their best life,” Bonow said. “‘Safe, legal, and rare’ forces people back into a place of silence and shame, and makes it difficult for people to advocate unapologetically and unshamefully for abortion rights.”

At-Home DNA Testing Kits May Give You Unreliable Health Information