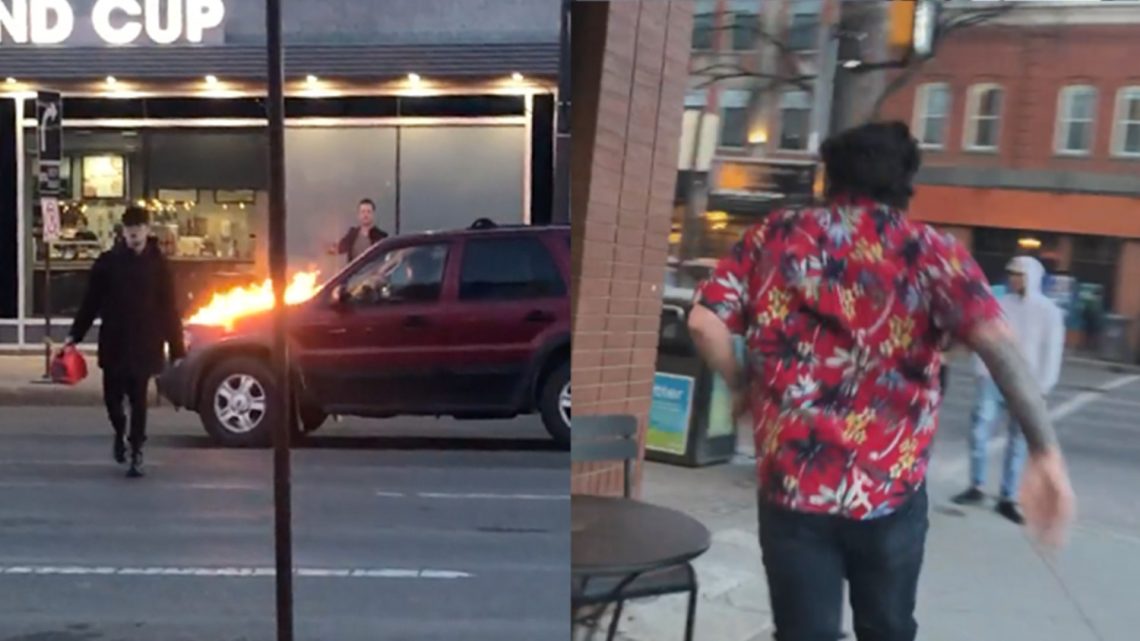 This Man Was Caught on Video Lighting Cars on Fire in Edmonton, Canada

A man who set more than a dozen cars on fire in Edmonton, Canada, this weekend was stopped by a man in a Hawaiian shirt and a man brandishing a big ol’ piece of wood as a weapon.

Around 8:30 PM Friday night, a dude dressed in black and armed with fire—well, some Molotov cocktails, a jerrycan of gas, and a lighter—took to Whyte Ave, Edmonton's main entertainment strip. This man walked around the avenue pouring gas on to the hoods and underneath parked cars, then lit the fuckers up.

Police have confirmed that “a male traveling on foot in the area was pouring fuel on vehicles and setting them on fire” and that while nobody was hurt in the rampage, 13 vehicles were lit on fire. Thanks to the ubiquity of cell phones and surveillance cameras we have a series of short cell phone videos which show the progression of the man’s spree. It’s an interesting watch to say the least.

So, why don’t we take a look at what happened?

The chronology of the videos isn’t definite, but the start of the spree seems to begin in an alley where the man makes and tests some Molotov cocktails before setting out. The next one shows the actual spree, as the man in his black coat and hat is seen lighting the tires of a car on fire as he walks past a bar patio. He then quickly lights up two more car tires. A bystander sums up the situation well with a simple “Jesus fucking Christ.”

Another video, which features already-burning cars in the background, shows the man crossing the road, doing a little spin as he gets to the other side, and lighting a car on fire. Yet another one shows the man walking down the sidewalk, dousing cars as a man with a fire extinguisher jogs behind him, presumably putting out the fire as he goes.

A video taken by Reddit user Spincrisis and uploaded under the name “Who's up for a little Friday night arson on Whyte?” shows the tail end of the man’s arsonry. In the video, the man in the black hoodie threateningly gestures toward a Second Cup coffee shop for some reason, before he turns around and straight up lights a red SUV’s hood on fire ten seconds later. The driver is still in the SUV but quickly rounds the corner as the fire on his car goes out. The man then walks across Whyte Ave and lifts his arms in the air like he’s Judd Nelson at the end of Breakfast Club and with his jerrycan presumably empty, throws it into the air.

From here, Edmonton goes just straight up Hawaii 5.0 as a man in a red Hawaiian shirt and a giant mustache bursts into the frame and chases arson guy into a coffee shop. To make the video even more surreal a nice man brandishing a 2x4 enters the frame shortly after. The two men—lovingly named “Hawaiian shirt guy” and “2x4 Guy” by the creative minds online—tackle the arsonist and conduct a citizen arrest.

After the citizen’s arrest police took the suspect, Malice Sutton, into custody and announced shortly thereafter that they were laying a slew of charges against him. After the video of our two heroes went viral online, local media caught up with them and they both were humble about their actions. Speaking to the Edmonton Journal, Jeff Halby, (2x4 guy) said that he doesn’t feel like a hero and that lots of people “had the same instinct that I did.”

“I thought, well I can’t go out there without anything in my hand,” he said. “I found a four-foot piece of baseboard and thought well, this is better than nothing. I ran across the street to cut him off because I didn’t want him to continue walking closer to Whyte Avenue.”

“I just kept thinking this guy can blow up a car,” he later added. “That’s all that was in my head.”

Bless you and your valiant wood, 2x4 guy. The lovely people online were taken by the bravery of Jeff Nachtigall, the Hawaiian Shirt Guy, as well.

Look, I’m from a town just north of Edmonton. I spent a ton of time there growing up and called it home for a major portion of my adulthood. When you’re from Edmonton, North America’s northernmost metropolis, the cold and isolation causes some angst rattling through your bones, believe me I know. This angst, much like those stupid things in that Star Wars movie, can lead you down two paths, the light and the dark.