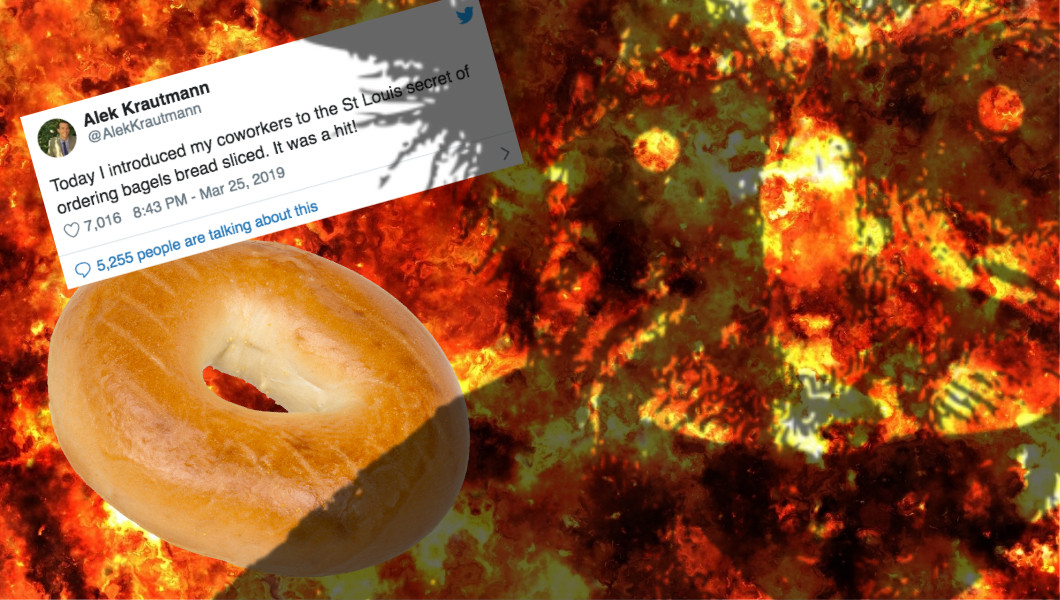 In this world, there are two simple truths: Bagels are good, and tweeting is bad. Combine the two and you apparently get this unholy picture some guy named Alek chucked into the ether a few days ago.

This is, of course, NOT how you should slice bagels, on any planet, in any universe. If you want smaller bagels, you would, after cutting once through the middle lengthwise, slice the loop of boiled bread into neat halves, quarters, and so forth, like you would a pie.

But nope! According to this dude, St. Louis, USA, does it like this—though others were quick to dispute the claim.

Personally, I believe that chopping up innocent bagels in the manner that Krautmann displayed should be deemed a crime punishable by a lengthy prison sentence, and Twitter users appear to agree with me. As the original tweet went viral today, a bunch of people roasted the blasphemous pic by posting their own, extremely cursed “St. Louis-style” concoctions.

St. Louis, as I have been reminded by several coworkers and family members, is actually known for plenty of unique, tasty foods—Imo's Pizza, gooey butter cake, toasted ravioli, Ted Drewes frozen custard, and Provel cheese, to name a few. Still, this bagel nonsense needs to cease, immediately. It’s... leaving a bad taste in my mouth.