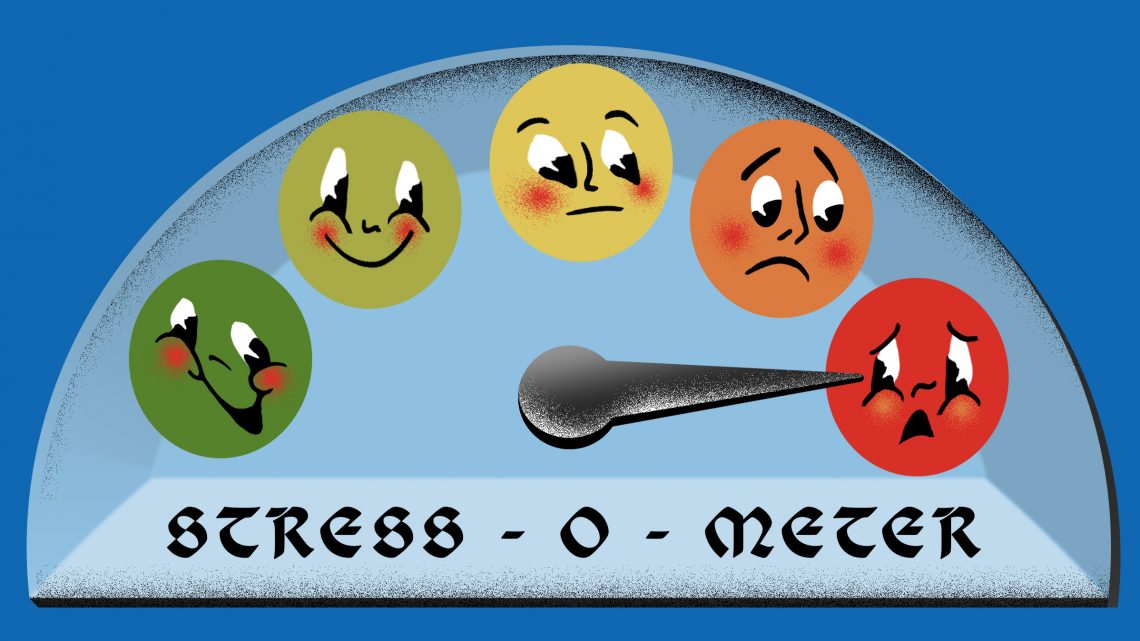 Maybe “stress” is an overbearing, over-doing-it word that we never replaced in time for the revolution with something less evocative of a troubled architect on a television dramedy rubbing the loose pink skin of his temples.

But it’s also this thing that lives with us and inside of us, that when compacted becomes chronic or trauma or both, that we’re supposed to be healing from in/with discrete units of self-care that don’t usually add up to anything real (and this is coming from me, your pal Kate, a post-bobo, post-goop, manifested moonbeam of a human woman). Stress is less of an epidemic than it is an atmosphere, the smog of economic precarity and environmental devastation and tech-drugs and the rest of it, right?

But: monomythically, maybe the real tumult of stress is also part of the “initiation” of the hero’s journey, the descent and death that leads to transformation and rebirth. Maybe. I dunno. Let’s find out!

Some stress is productive, like, pony-queen and anxiety-muse Ariana Grande made two high-qual albums in five minutes, you know? It can be creative and generative and galvanizing! And Serena Williams—the only good celebrity-celebrity other than Andy Cohen, RuPaul and Alan Alda—uses tennis-stresses to either start winning when she’s losing OR (correctly) telling some grossie she is owed an apology, in the very midst of probably a top-five most stressy moment of her life? Her liiiiife! Stress is the only reason some of us get anything done.

No one has ever adequately explained to me how my body knows it’s been 28 days since it last kicked out a bunch of blood. Honestly, how? The body is a mystery and medicine is impressionism.

After a zillie experiences with random-seeming migraines and micro-illnesses and their pointless collateral of lost days, I realized there were thick and repeating if meandering lines (wide enough to be visible from space, appearing 16 times a day like the sunrise) between stress (to which I am predisposed by brain and circumstance, and to the sticky, chronic variety, despite my general human luck) and pain, illness, and a general sense of contraction: a dry crunch of the mind; an old granola.

So, so, so: increasingly all I care about is my body, and I certainly-absolutely-definitely don’t mean in a consistently-goes-to-the-gym kind of way, but trying to (and I never say “trying to” because I come from the “Don’t Try, Do” Toronto scene-era) listen to and understand my body, whisper with it, scan it and feel it, make my own biomechanics as real to me as my thoughts. (Did you know: they are REALER?)

This is all really hard for me but is officially better than when my body-experience was in two parts, a) my big head and big eyes popping out of a tight, zipped-up hoodie, the thinking-perceiving self the only self, and b) sex.

Stress lives in the body, actually, occupies the body, and this gets so obvious the first time you feel the clenching fist in your tum tighten and glow red and you go, suddenly, “Oh, it’s there!”

And I feel like the super-best thing to do for your body AFTER regular and thorough check-ups and screenings and follow-ups and info-gathering and da-dum da-dum da-dum da-dum and the rest of it is to dedicate a few long minutes, a few times a day, to just feeling it, tip to taint, toes to nose.

Like ultimately, most stress is a choice. Maybe I’ll wheel back on even “most,” whatever, you know what I mean: Iet’s agree that chronic socioeconomic stress like poverty and instant, insane situational stress like being pinned under an SUV are not a choice; let’s agree that some stress, like the kind that isn’t going to kill us, is a kind of choice. My rule now, having been through some real pain and trauma in my life—my liiiife!—is that whatever can be necessarily resolved—with money, time, effort—is not a problem, and so, not stress. Going through terrible things can be so freeing!

Related: an expensive gift of where I am now in both life and my self-cosseting process is learning that I simply can’t embody a lot of interpersonal stress, or maybe any, like, I’m allergic to it, like the way I’m allergic to caffeine, and sugar: other people’s recreational doses are, for me, soul-destroying. Not because I can’t take it, but because I can—I can just take a lot, from other people, unbothered, unstressed—and so I end up the fall guy, the loser finding themselves on someone else’s terms. Like, it’s not usually the doing of something that makes it stressful, it’s the unconsciously shitty or ego-driven way of doing something that makes it stressful, and with other people, not only am I on their lunar and emotional schedule but I’m up against whatever intensity and explosive potential they’re bringing, instead of whatever mutually determined set-point is the actual emotional median.

There’s a lot of confusion in the feelspace about self-care and what it is and isn’t, what it does and doesn’t, but what is for sure is that quick-quick reliefs (like, mini units of relief, like, one-hitters of “ahhhhhh”) don’t work.

Like following a bleach-blonde windswepterie on Instagram—how is every Instagram account suddenly an upcycled t-shirt shop in Malibu or Maui?—isn’t the same as, and is in fact probably counter to, the experience. Same-same with watching soothing gifs of babies having their faces rubbed—LI’L PINKY CHEEKSIES! LI’L TIPPY NOSE TIPS!—or farm animals being friends in fields, or your digital ASMR of choice.

I think we think it works because we feel it. We really feel it, it explodes up from our affect to our feelings and then pools as collective emotion, and with that we surge forward with it, an ocean of us-es, saying and writing and reposting how much we feel it, the YES, THIS!!! But then where does that all… go? What does that do, functionally?

Sometimes I lay down on my accommodating man’s wide back and roll around turtle-style and it feels so good but also makes me so, so sad, because it’s nice as its own thing but it’s also me pretending I’m in an ocean and IRL I live in a city that is, right now, lined with ice ranges filled with frozen dog shit and garbage, and any temporary approximation of waves, or sun or ease or even basic relaxation or whatever your feel-goodery is about, makes coming out of it an accelerated drop ride that you don’t need when you’re already ceramic-bunny fragile, which I am in late winter. Like: massages are great until it’s three hours later and you’re wound back up, tight-tight, razor wire hugging the viscera. Maybe this works for people, the faking it, or being temporary, but not for me.

So I think what this means is that descending into the variety of healing modalities that feel like they’re doing something for you is cool but it has to be “always,” less a routine and more of a practice. A, aherm, “lifestyle.” You know that line, like, meditate for 20 minutes, but if you don’t have time, meditate for an hour? Yeah.

The best and worst and best-worst thing about being a thinking, feeling, absorbing, doing person right in this moment, especially a person who is part of the millennial and millennial-adjacent cohort that I think is more appropriately understood as the Doom Generation (with obvious snaps to the great writer-director Gregg Araki, creator of the classics I rented at the one good video store in my hometown and then watched on the lowest volume when my parents were asleep), is that we get to-cum-have to acknowledge our stress and loss and grief and trauma—individually, familialy, socially, structurally—and if we have enough space for it, each other’s.

It’s wild, like wyyyyyyyyld, that in one generation, I would argue inside of ten years, the obvious, correct, and maybe not accepted-accepted but basically accepted thing to do with all of the pain we live with went from being REPRESS IT! YEAH! LIKE THAT! to this shared, warming, stewing narrative of collective realness, where a repressor, with their smirking invulnerability, comes off like a broken vase covered in a city map of golden glue holding it all together, a kintsugi-style person.

May we radicalize, briefly? What the fuck are we doing?

Instead of whatever that is, don’t. Do nothing. Don’t think. Rest. Completely avoid screens with the minor exception of playing music or your boringer podcasts but dude, even then, can we just use something else? I asked my dad for a “boom box” for my birthday. Sing to yourself. Pet your cat (omg I would never). Use all your beauty products and put on and take off all your jewelry. Tilt your beauty in the mirror, this way and that, and leave, without proof.

A tip to lift from Marie Kondo’s organizational experience: touching and feeling and really looking at the things you own is pleasure. I’ve known this since actual lifetimes ago, when I told my roommate, A Punk, that I was looking at the inside of my backpack for the first time, and that it was so intimate to see and touch the viscera of my daily companion, which was structured for a Swiss mountaineer with a kindergartener’s aesthetic (backpacks used to be great), and she told me that she knew all of her stuff that intimately.

Imagine: you should be able to list, without looking, every single item that you own. You should be able to itemize what you spent your last one-thousand dollars on. You should know the last ten things you looked at online. If these moments have rocketed away from you, they are probably at least somehow controlling your experience, your bag, your brains, your moods. And that’s stress, right?

UK Ministers Tell Theresa May to Stand Down: “No Deal In the Desert”