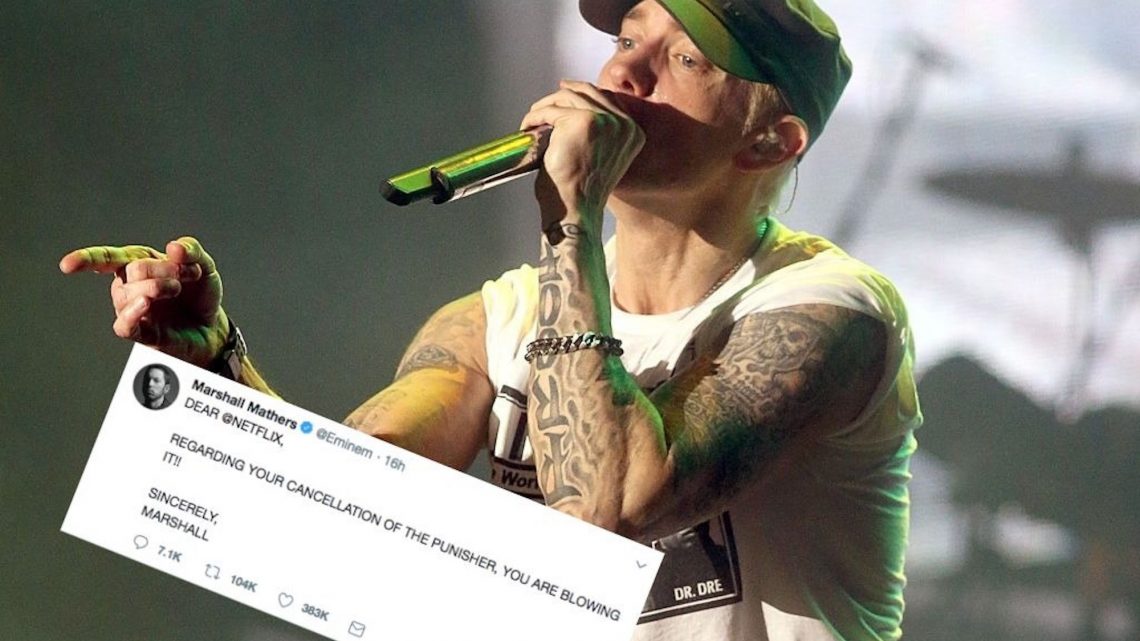 Turns Out Eminem Is Himself a Stan

Back in 2000, when Eminem dropped the video for his mega hit "Stan," the rapper couldn't have known that his character of an obsessed, psychotic fan would come to literally define fandom in the Oxford English Dictionary. In the video, former child actor Devon Sawa does his best Single White Female impersonation, transforming himself into the Real Slim Shady, and writing letters to his idol based on ones the rapper actually received from some very intense fans.

Turns out, Eminem (government name: Marshall Mathers) has a few obsessions of his own, particularly Netflix's Marvel Cinematic Universe drama The Punisher. After Deadline reported on Monday that the streaming service was canceling the show, Eminem became the champion of the show's (apparently many?) pissed off fans by tweeting a message to Netflix. On Wednesday night he let them know—IN ALL CAPS—they’re “BLOWING IT.” But more importantly, his impassioned response sounded an awfullllllly lot like it was written by the(almost as if ... he is Stan!).

The power-move tweet is a page straight out of the Stan manifesto. When writing to your ultimate fave to let them know they've disappointed you: Be imposing, yet polite. Aggressive, but keep it business formal (Dear and Sincerely are a must). Let them know they got to you, but also that you can’t be messed with. And above all, make it seem very possible that you might have a few tattoos and posters, and maybe some framed pictures, in your home that they’ve now rendered completely useless by burning this bridge.

If Twitter was a thing in 2000, Stan would’ve most certainly tweeted in all caps. He would’ve run people’s mentions into the ground, slid in their DMs, paid for a verified check mark for better sliding access, and maybe pulled some Joe-from-You stalker tricks to get some location trackers going.

I can just see Eminem at home realizing it’s up to him to speak for The Punisher fans of the world (again, who are they?) and writing a bunch of business-style tweets voicing his supreme disapproval. PER MY LAST TWEET, IF YOU DIDN’T WANT TO KEEP THE SHOW GOING YOU DIDN’T HAVE TO. IT IS WINTER AND I NEED MY FAVORITE SHOW TO BRING WARMTH INTO MY MANSION AND HEART. I WILL CIRCLE BACK WITH YOU AND CC THE APPROPRIATE PARTIES. BEST, MARSHALL. He gets up, shakes his shoulders off, paces the room, watches a hilarious fan-impersonation video of himself to get back in the zone, followed by his own diss video for Donald Trump, and continues on his day.

Netflix should honestly watch their back because real stans recognize real stans and you can’t get realer than Eminem combining forces with people that ride for both him and this (apparently) popular show. Maybe bringing a show back from cancelation is more of a feat than the victory Friends fans pulled off in December getting Netflix to re-up the sitcom for at least another year. They certainly haven't been wincing at the uproar over their canceled Marvel shows like Daredevil and Luke Cage. But jeez, will someone please at least honor this man’s impeccably business formal diss tweet with a response? Thanks so much. With regards, VICE.

Those Stupid American Flag Pins May Finally Be Dying Out