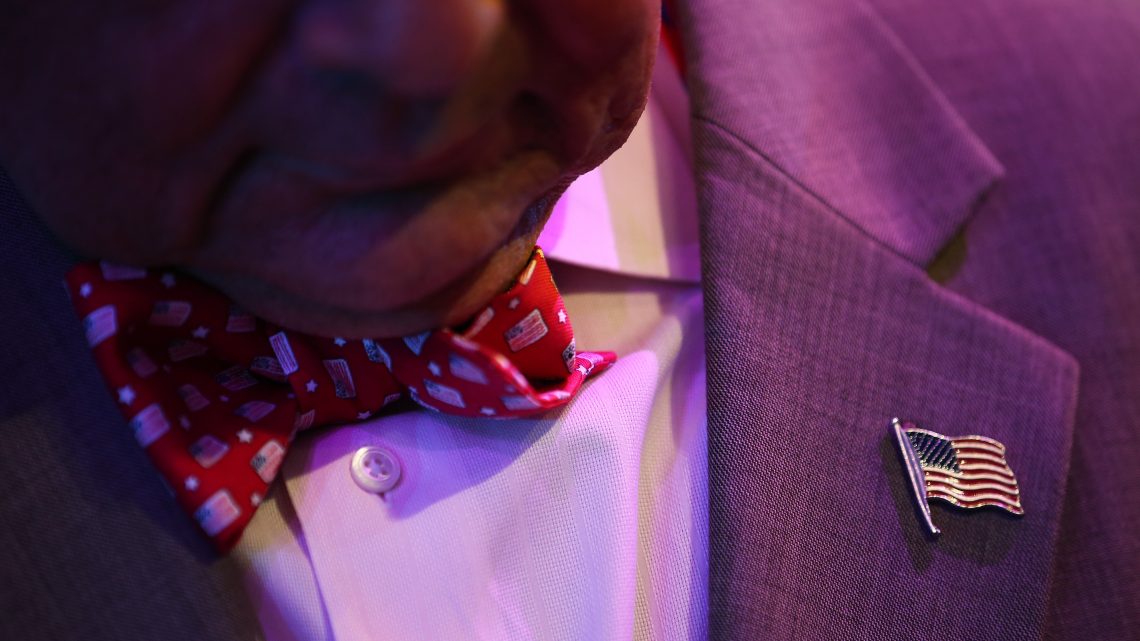 Those Stupid American Flag Pins May Finally Be Dying Out

Twitter’s favorite large adult son, Donald Trump Jr., produced one of his most thought-provoking self-owns earlier this month, when he attempted to impugn the patriotism of the Democratic women of Congress. On February 6, Trump tweeted a post–State of the Union photo of a white-clad group of congresswomen huddled around Nancy Pelosi with the superimposed caption “NOT ONE AMERICAN FLAG PIN AMONG THEM.” Ironically, Trump also wrote that photo “speaks for itself and no one is at all surprised.”

At the top of his replies, above the cracks about the Trump family’s preference for Russian flags or the gallery of Republican politicians wearing flag pins in mugshots, were a pair of photos from that same SOTU. One was of the Trump children. The other was a crowd shot of the Republican side of the speech audience. Not a flag pin in sight in either picture.

Junior’s posting may have been just another attempt to rile his father’s dwindling base, but he unwittingly may have exposed a noteworthy zeitgeist shift. Could the decades-long rule of the flag pin finally be over?

Pins depicting Old Glory first made their way into politics on lapels of Republican candidates during the 1970 congressional race, according to an old Time piece—a subtle counterpoint to the anti-Vietnam War protestors who were then regularly burning the flag at the time. But it was Richard Nixon who helped usher the accessory to True Patriot shibboleth status. As biographer Stephen E. Ambrose wrote, the president began to wear flag pins after the idea had been suggested to him by his chief of staff H. R. Haldeman, “who had seen it done in a movie called The Candidate.” Nixon would wear the pin throughout his presidency, including while lying to the American public about his involvement in Watergate, and later while resigning from office.

The flag pin returned with a vengeance after 9/11, when grand displays of patriotism were requirements for both Democrats and Republicans alike. This political science phenomenon of increased patriotism in times of crisis is fittingly known as the "rally 'round the flag effect." Even the media participated in the hawkish theatrics of the time. Some pushed back and caught plenty of flak for it: When ABC continued to uphold its longstanding anti-pin policy after 9/11, it resulted in chain emails urging boycotts of the network and its sponsors along with claims the network had instituted a new policy to ban the pins and patriotism itself.

While other outlets pontificated on the ethics of allowing anchors to wear pins, Fox News went all in from the jump. "Why would it ever be inappropriate?" asked Fox News’s Brit Hume. "It doesn't stand for the Bush administration or for a certain party or even the government. It stands for the country. Why is wearing a symbol of the country of which you're a citizen a problem?"

The problem, some people said, was that the flag pins could stand for not just patriotism but also an uncritical view of the US government at a time when the country was marching toward what turned out to be a disastrous war in Iraq. Those attitudes may have even pushed Americans to seek impartial reporting from foreign outlets. Greg Dyke, the director general of the BBC at the time, noted the increased American audience for his channel’s coverage of the Iraq war and said that “many US networks wrapped themselves in the American flag and swapped impartiality for patriotism,” and in doing so, “misjudged some of their audience.”

By 2007, the Iraq War was no longer being viewed so positively, and a few Democratic politicians began to toy with the idea of discarding the flag pin. One of those was Senator Barack Obama. That October, when asked why he was not wearing a pin on his lapel, the presidential candidate told KCRG-TV in Cedar Rapids, Iowa, that while he wore the pins after 9/11, he had stopped during the Iraq War after noticing they’d become a substitute for “true patriotism, which is speaking out on issues that are of importance to our national security.” He added that he hoped telling Americans what he believed would make the country great would be an adequate “testament to his patriotism.”

This prompted such a huge outcry that Obama changed course and went on to wear a flag pin for the rest of his candidacy and presidency. Stupidly, that did not end the controversy: Subsequent racist urban legends popped up about him sometimes wearing his pins upside-down as a Carol Burnett ear-pull to his Muslim Brotherhood friends.

Seeing Obama attacked for such farcical reasons pushed many on the left to start challenging the flag pin. “New Rule: Show me a man wearing an American flag pin in his lapel, and I'll show you an asshole,” Bill Maher snarked in Salon after the original Obama pin scandal. “Make wearing a flag pin the 28th amendment,” John Roland Martin facetiously suggested in a CNN article about all the hand-wringing.

By the 2016 presidential election cycle, major cracks had emerged in flag pin dogma. The press was again openly challenging the practice and, though the right was still mostly committed to the bit, the Democratic primary debates were nearly pinless, save for Martin O’Malley. And after Donald Trump's election-night upset, the flag pin tradition seems to have sputtered out entirely.

From the administration’s first days, it became clear that the flag pin reverence of the Bush era was long gone. While covering the John Kelly’s confirmation hearing, Washington Post reporter Robert Costa overheard a friend of the general suggest he put on a pin, to which the general replied “I am an American flag.” This bucking of orthodoxy earned Kelly praise from Ann Coulter. A year later, Sean Spicer’s accidental upside-down flag pin during one press briefing spawned jokes about how he was sending a distress signal. Cheapening the brand further was Donald Trump Junior, who was mocked for wearing a flag pin with “deplorable” written across the middle to the 2018 White House Easter Egg Roll.

Brandon Lenoir, a political science professor at High Point University, told VICE it was only a matter of time before this shift happened. "We are now many years removed from 9/11, even though we're still a nation at war, people are not as engaged," he said. "That's why I think we're seeing a loosening of the expectation that every elected official will be wearing an American flag."

"We really do have a divide in the political ideologies of the parties with patriotism," he explained. "For some, that means an outward expression of wearing the flag, while others think upholding the Constitution and fighting for the issues that are important to them is more patriotic."

The flag pin's decline might simply show that certain symbols inevitably fall out of favor—these days, conservatives instead stick flag emoji to their Twitter profiles. But it also shows a fundamental change in discourse. Prior to the Trump administration, the Republican Party had largely favored dog whistles rather than coming out with their ugliest views. Attacking Obama over his flag pin was an easy way to target him as alien and un-American without saying that the black son of a Kenyan was plotting to destroy the US. The GOP's new figurehead, Trump, is both unwilling and unable to participate in that approach. He always says the quiet part loud, and only occasionally wears a pin.

Turns Out Eminem Is Himself a Stan