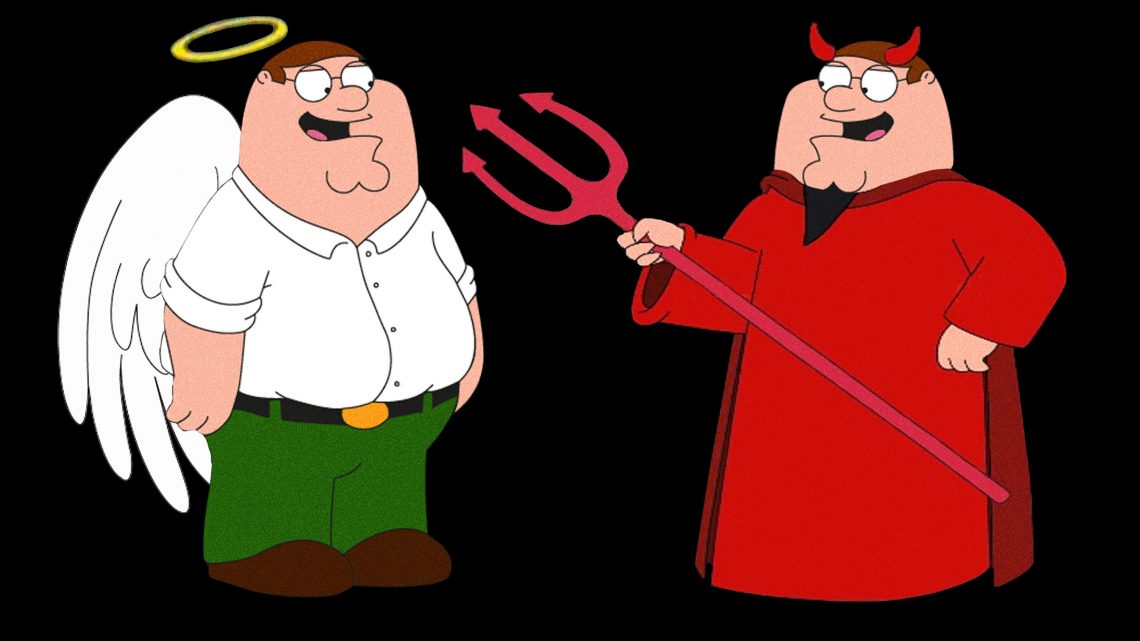 Seth MacFarlane’s animated sitcom, Family Guy—a show that still bags 2–4 million viewers a night on the reg—turns 20 years old today. While it started as an upstart RISD kid’s fringe sitcom parody, the series is now a juggernaut that’s as divisive as many political wedge issues.

For the haters, the show either isn’t their type of humor, or the rape jokes, gay jokes, Jew jokes, disabled jokes, trans jokes, Muslim jokes, or AIDS jokes are often so repulsive that watching can be painful. Fans who defend Family Guy argue that offensive bits are the whole point of the show, so if viewers don’t want to be offended they should just not watch. As the A/V Club’s Todd VanDerWerff put it, “Somewhere along the way, we’ve all decided if we’re Family Guy fans.” Whether or not someone likes the show can be an indicator of their most deeply held cultural beliefs.

A scene in the episode “Movin’ Out (Brian’s Song)” is a typical example of why it’s so controversial. There’s no way to finesse this: Peter Griffin’s buddy Quagmire rapes Marge Simpson. She pushes him off of her body and runs off-screen as he pursues, pants around his ankles. A few moments later, they walk back on screen together and he says, “That wasn’t so bad, was it?” She says it was “fantastic” and they wind up in her bed. When Homer discovers them, Quagmire shoots each one of the Simpsons dead. The clip is on YouTube and it’s pretty fucked up, so watch with discretion.

FOX chose not to air it in the United States, but nobody kept it off of Canadian TV, the DVD box set, or Family Guy’s revival on Adult Swim. MacFarlane said in the clip’s commentary track that the studio canned the joke because it was “too personal” an attack on The Simpsons. MacFarlane felt it was proportional retaliation for an episode of Matt Groening’s show dunking on his for “plagiarismo.”

On the other hand, why focus on this instance when talking about Family Guy’s now 20-year legacy? Why not talk about how its debut made then-24-year-old MacFarlane the youngest executive producer on television? Why not talk about how the show has won eight Primetime Emmys, plus picking up the first nom for Outstanding Comedy that an animated show had received since The Flintstones? Why not talk about its resilient struggle to stay on air despite two separate cancellations? Why not talk about the guest stars and the stoned chuckles sparked by extended chicken fights and road trip episodes and relentless “The Bird Is the Word” non-sequiturs?

The reason is that rape or race jokes where the rapist or the racist isn’t being taken down a peg sour the show for some viewers, but not for millions who tune in each week. Peter McGraw, the director of the University of Colorado, Boulder’s Humor Research Lab, HURL, has a theory why.

He spoke to hundreds of professional funny people for his book, The Humor Code, and kept finding two philosophies when it comes to what makes a good joke. “One model of thinking is comedians should try to punch up and do no harm,” he told VICE. “And then the other one is that there shouldn't be limits, that the limits are imposed by the audience. If they're not laughing, you're not going to stay in business very long.”

There’s a metaphor he uses to explain the difference between the two ideologies. “No limits” people think comedy is like a thermometer, and the “do no harm” crowd sees it as a thermostat. The joke is either measuring the temperature of the room by finding the laugh, or it’s using laughter to adjust it. Jokes either change people’s minds, or they simply reveal what people already think. Watching Family Guy then becomes a litmus test for whichever of the two camps a viewer falls into, just as assuredly as views on reproductive rights are a steady indicator of who a voter picked for president in 2016.

To be clear, this conversation isn’t about whether rape jokes can be funny. Survivors use comedy to cope with the horror of sexual assault, and master comedians like George Carlin have been praised for their sensitive approach the subject. Others argue that rape is never funny, and jokes about it can harmfully trigger traumatic memories. Either way, the Quagmire gag crosses a line for those who see comedy as a space with a responsibility to set the tone for what is acceptable in a larger, cultural conversation.

Once that line is crossed with no apology, MacFarlane and his show are effectively outside of the “do no harm” group’s trusted circle. The “no limits” folks can shrug off a joke that didn’t land as a minor failure—no one was actually raped, it’s just a cartoon—and Family Guy’s whip-fast, 5.2-jokes-a-minute pace makes it easy to focus on the ones that do get a chuckle. But once someone is on the outside, jokes that toe the line all of a sudden cross it, alienating themselves from those that don’t. McGraw compares the effect to being tickled by a trustworthy person versus a creepy old dude in a trench coat—one makes people laugh, the other makes them scream.

Comedians are playing out this culture gap in real time. In one corner is Louis C.K., who infuriated many comedians with his abrupt return to the stage after admitting to sexual misconduct last year. In the other is Hannah Gadsby, who acknowledges the power that jokes have to harm people and make society worse—or better. This dichotomy resonated with Lou Wilson, an L.A.-based improv comic you may recognize from American Vandal. He told VICE, “If I make a joke that cracks the whole room up, but hurts one person, that ruins the joke for me. That is a bad joke.”

A growing shift toward that way of thinking could be part of why fewer people than ever are tuning into Family Guy, which Nielsen says peaked in its first season with an average of 12 million viewers per episode. Season 16, which aired from 2017 to 2018, landed about 3.52 million viewers per episode. Family Guy, and even MacFarlane’s appearances outside of the show, may come off as the creepy trench coat guy to a larger percentage of the viewing public. Think about his ode to women's breasts at the 2014 Oscars, or the subplot about an alien who essentially exudes date rape drugs on The Orville. That could put a lot of people off, especially as our culture becomes more and more conscious in the #MeToo era.

Of course, there are a lot of reasons for such a change, ranging from what Vulture’s John Hugar called the show’s “perpetual rut” to the simple fact that the market is more fragmented than it was 20 years ago and there are more animated series geared at adults today.

My colleague Angus Harrison identified Family Guy’s three big draws as pace, recognition, and bright colors—and in 2019 there are shows that do each one better, without the baggage. Rick and Morty and Big Mouth can both can be as crudely entertaining as Family Guy, while avoiding jokes that propagate harmful stereotypes or violence against marginalized people. Bojack Horseman tops it for jokes per minute and pop culture references. Steven Universe is more brightly colored and has catchier songs to boot. South Park has been on for longer than Family Guy, but it still holds up.

In mid-January, Family Guy aired an episode in which Donald Trump sexually assaults Peter’s daughter Meg, and people got so mad that producers Rich Appel and Alec Sulkin, who weren’t available for comment on this piece, had to publically defend the joke. The angry either balked at the crass depiction of the President of the United States, or found it to be proof that the writers still have no clue how to joke about the transgressive issues to which they cling.

The showrunners wrote an announcement that they’re “phasing out” gay jokes. Some are puzzled about how it took until 2019 for them to make this move, but it makes sense when you realize that Family Guy has no interest in being the proverbial thermostat. It’s reactive, chasing the lowest common denominator of what will get 12 or five or three million people to snicker. In a world with increasing demand for comedy that cranks up the heat on institutional oppression, Family Guy is a thermometer through and through.

Too Big to Bail, Too Big to Jail: Italy in Recession With Very Troubled Banks

‘The Babadook’ Director Finally Recognized Her Creation as a Queer Icon