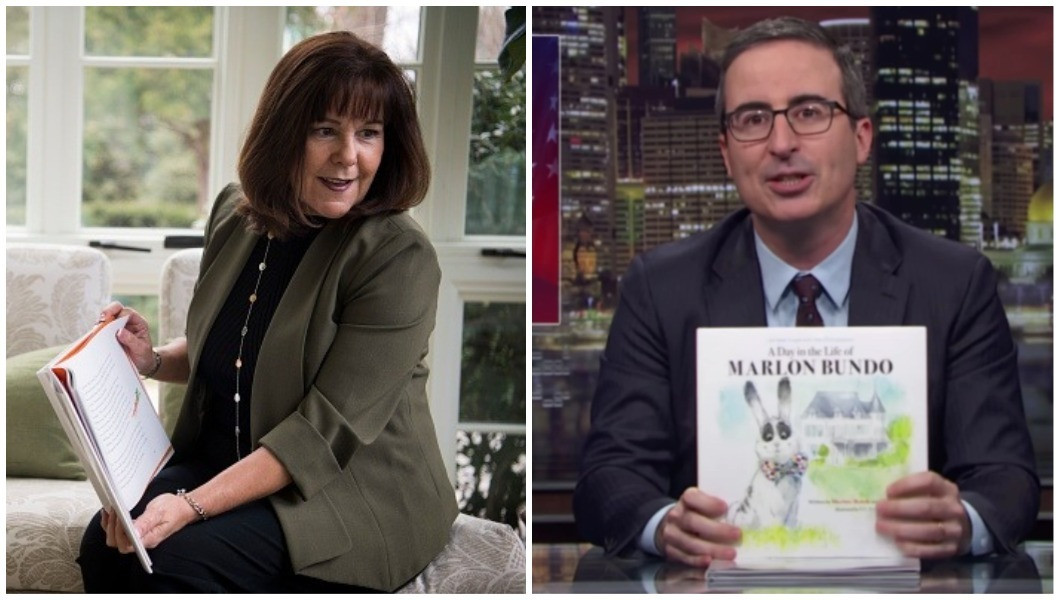 Karen Pence just took a job as an art teacher at a private school in Virginia with a strict, deeply fucked ban against LGBTQ students and faculty. The Second Lady had worked there for 12 years before taking a bit of a sabbatical, but now that she's back, an LGBTQ nonprofit is sending her a kind of welcome-home gift: A bunch of copies of John Oliver's children's book about a gay bunny.

Not just any bunny, mind you; her family's bunny, Marlon Bundo, whose presumably tortured existence as Mike Pence's pet was chronicled in a kids' book written by the couple's daughter and illustrated by Second Lady Pence herself. Right around the time it came out, the folks at Last Week Tonight put together their own version, A Day in the Life of Marlon Bundo—only in their tome, old Bundo winds up getting married to another boy bunny.

On Thursday, the Trevor Project—a nonprofit dedicated to suicide prevention among LGBTQ youth, which split the proceeds from Oliver's book with an AIDS nonprofit—announced that it had shipped 100 copies of the thing to Immanuel Christian School, where Pence teaches, along with a note encouraging the K–8 program to "include [it] in your school’s library or classrooms."

"Policies and rhetoric that exclude or reject LGBTQ youth can lead to increased risk for suicide and depression, and it’s our organization’s mission to end suicide among LGBTQ young people," the letter reads. "With your help, we hope you will change your school’s student and employee policies to accept LGBTQ students and employees."

Per Immanuel's "parent agreement," the school refuses to admit and would possibly expel students if they or their families are found to be "participating in, supporting, or condoning sexual immorality, homosexual activity, or bi-sexual activity," citing a passage from the Bible that calls homosexuality an "abomination." Immanuel's application for faculty contains similar language, prohibiting any prospective employee from "homosexual or lesbian sexual activity, polygamy," or having a "transgender identity."

Ostensibly, the school's galling anti-LGBTQ stance extends to what kind of literature it's willing to show its students, so there's a slim chance Immanuel will actually accept a box full of gay Bundo books, but hey—who knows. Here's to hoping whoever opens the thing confuses Oliver's version with the Pences', and 100 copies of a kids' book about same-sex marriage wind up in the library.