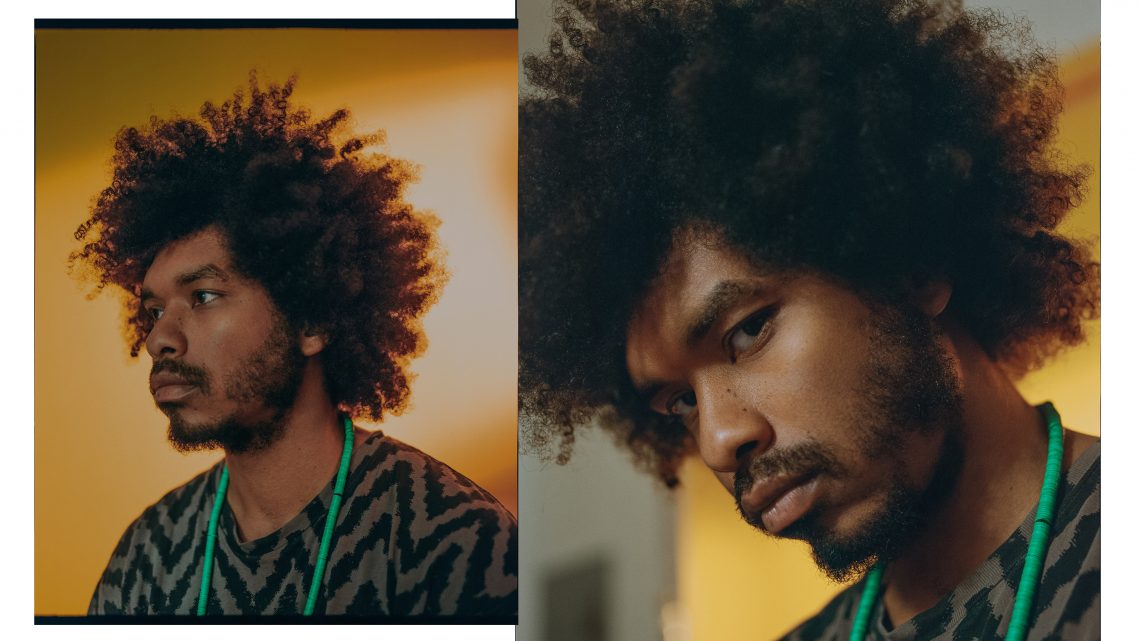 Terence Nance Is Conquering Hollywood with the Power of His People

It seems like Terence Nance does everything in a communal style. So, I shouldn’t have been surprised earlier this fall when the creator of HBO’s critically acclaimed Random Acts of Flyness suggested that we eat at Bunna Cafe, an Ethiopian spot in Bushwick, Brooklyn, where we sat caddy-corner sharing a big plate of sourdough injera and shiro stews.

I wanted to speak with the lenky 36-year-old, who has extra inches thanks to a billowy afro, about how he’s managed to write, direct, and act in a show that has shattered limitations placed around black creativity at time when Hollywood is still trying to push white savior films.

His explosive, darkly funny show touches on everything from black masculinity and police violence to polyamory and conspiracy theories, all in a twisted stream-of-consciousness style that can be triggering, enlightening, and reaffirming at the same time. The show has aired a Jon Hamm–hosted infomercial for “White Be Gone,” a montage arguing that prestige shows like The Sopranos inspired the alt-right, and a first-person shooter game centered around street harassment. For this kind of dizzying, socially conscious creativity, Nance has been hailed as an “indescribable,” “bold new voice in experimental cinema.” Alongside peers like Jordan Peele and Barry Jenkins, his ascendance on his own terms has helped make it clear to young black creatives like myself that a new age is afoot, where you don’t have to tap dance or toe the line. And he’s just getting started. HBO renewed Random Acts of Flyness for a second season, and Nance was just tapped by Black Panther director Ryan Coogler to direct Space Jam 2, which will star Lebron James and hit theaters in 2019.

For a multi-hyphenate who hob-knobs with black royalty like Solange and is breaking new ground in television, Nance was endearingly modest when we met for dinner in October of last year. In fact, he pushed back on the mystique he’s developed as an eccentric trailblazer. But he is one, spouting a blunt diagnosis of race issues in Hollywood and fluidly explaining his big-picture beliefs like the idea that blackness is evolving away from a binary to whiteness. His casually radical demeanor mimicked the take-it-or-leave-it style of his show. And it soon became clear that his confidence is that of someone who’s buoyed by a strong community of black thinkers.

“My success is not a result of my individual railing against white supremacy,” Nance said. “I’m part of an interconnected community, and we’re all confronting a lot of this together. I am where I am because of systems that have been gestating and growing. I contribute to it when and where I can. But that community—this community—is larger than me.”

This commitment to community is likely an outgrowth of Nance’s upbringing in an interconnected network of black artists and performers. Terence’s father, Norvis Nance, is a local news cameraman in Dallas with a penchant for photography. And his mother, Vickie Washington-Nance, is an actress who still has a busy play rehearsal schedule. In the late 70s, she traveled across the Southwest with a black theater troupe that existed for about a decade called the Afro-American Arts Alliance, and she brought Nance and his three siblings to her rehearsals. Growing up, he saw alternative black films like Daughters of the Dust and Sankofa when they played in Dallas, long before he had an inkling that he wanted to make his own films. “They may not have been really hearing it and knowing what it was,” Washington-Nance told me over the phone, as she reflected on the art and people she exposed her kids to in their formative years, “but it courses through their veins.”

His mom also performed alongside icons of black creative freedom Ruby Dee and Ossie Davis, when the iconic couple came to Texas to film their free-wheeling variety show With Ossie and Ruby (1980–1982) for PBS. Celebrity guests who thrived at the intersection of art and activism like James Baldwin and Gil Scott-Heron would flock to Dallas every week to appear on the show, which was comprised of a hodge-podge of comedy skits, music performances, and intellectual conversations. The couple was also committed to making the show feel like a non-hierarchical family affair, as Washington-Nance is still connected to a number of people from the experience. Interestingly, Nance saw With Ossie and Ruby for the first time months after shooting Random Acts and said it’s one of the closest things he’s aware of to Random Acts in regards to the creative freedom wielded by the titular hosts. “All of my children are keenly aware of how our culture and our arts can be used to do wonderful things for and with the community and how important it is for people that our cultural artists be with the community to tell our stories,” Washington-Nance said. 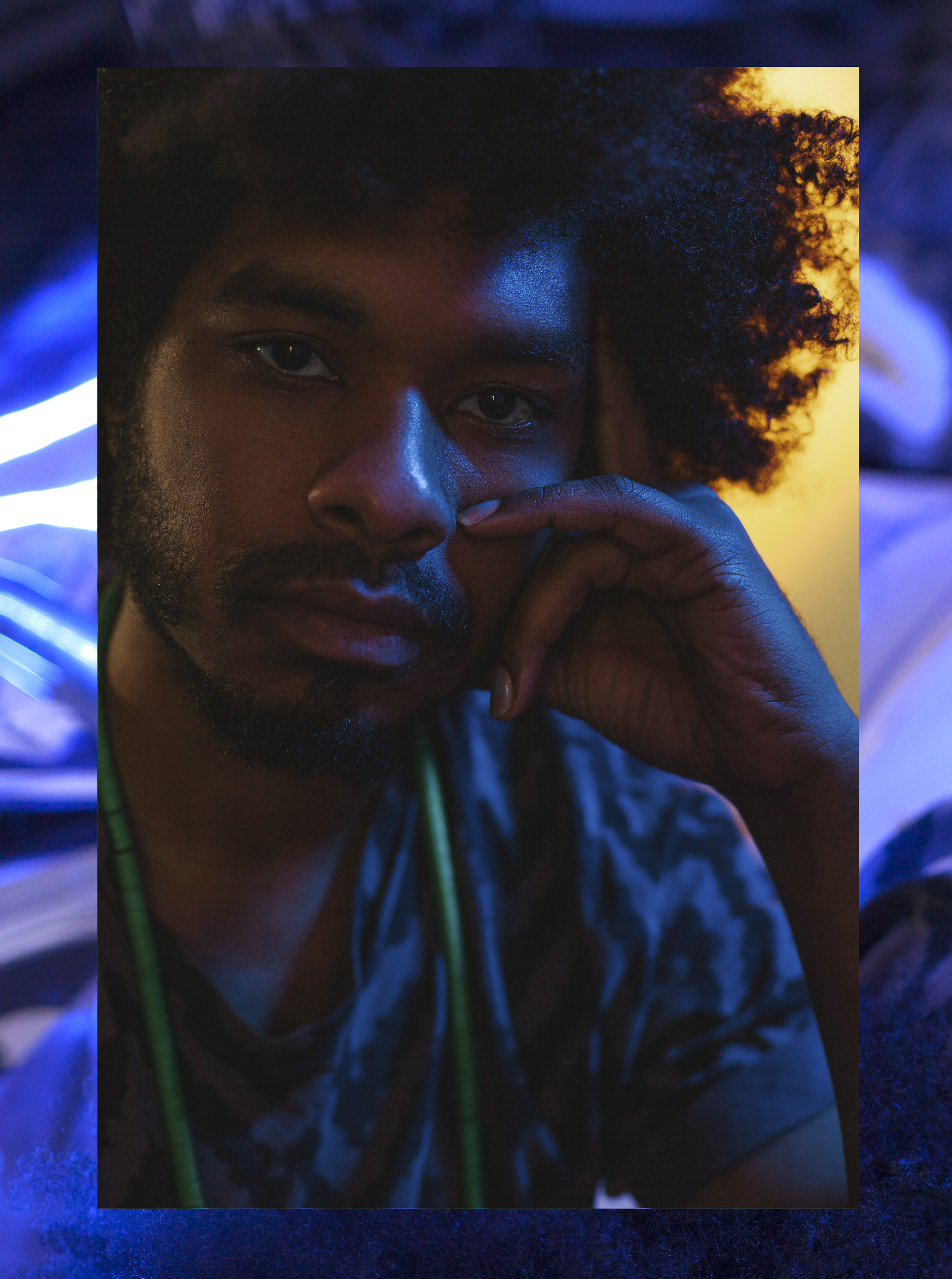 In the same way Nance has used collaboration to push his show into a space that is unpredictable and undefinable (just like he posits blackness is), he’s also attempting a similar feat with his own career. Nance isn’t just a producer, writer, director, and actor for Random Acts of Flyness, he’s also also an animator, a video game designer, and a musician. The week we met at Bunna Cafe he had just released his first song off of an upcoming EP which featured Nick Hakim. And during the process of writing the show, he helped get HBO to fund his brother Nelson’s first game, Kekubian Assasin, which tackles toxic masculinity. Interestingly, Nance doesn’t view these projects as divergent. When a Saint Heron interviewer asked him why he wore so many hats on the show, he simply said that “the hat I happen to have on when viewing from a capitalistic context seems like a lot of hats, but it’s really just one hat.”

But despite his insatiable creativity, Nance is frustratingly aware of the black performers before him who weren’t able to transition into new lanes. “Eddie Murphy was never able to self-determine and transition into a writer/director the way that Ben Affleck has. Even though arguably his talent as a writer/director/performer isn’t even in the same conversation. So it’s like, Why not? It’s not because he didn’t try. He wrote and directed Harlem Nights,” Nance told me, breaking from his mellow tone for a moment. “Or you hear someone like Don Cheadle talk about how hard it was to get Miles Ahead (the Miles Davis biopic) made. He’s on the record saying ‘I could not get the movie made without inventing a white character that did not exist and make him a co-lead of the movie.’ This is Don Cheadle. He’s in the Marvel Cinematic Universe.”

Nance spoke more passionately about them than his own experiences with racism in white Hollywood. When I asked if he ever had to abandon an idea because of closed doors, he playfully invoked the Teyana Taylor song “Rose in Harlem” saying, “If it ain’t about blessings, I can’t even address it.”

His production company MVMT, which grew out of his college collective The Fly Movement, now costs hundreds of thousands of dollars a year to operate, relying heavily on grants. Meanwhile, Ramos-Chapman and others in his close circle, especially womxn, still use Kickstarters for their projects. And Nance, as much as anyone in his community, is aware that despite how much he inspires young black creatives, his production company’s stride toward independence can’t help everybody. “The success of black filmmakers or collectives has not always consistently translated to other collectives in those generations or subsequent generations,” he said recounting the fleeting golden era of black 90s sitcoms and pointing out that Eddie Murphy’s success didn’t help “the Julie Dashes of the world.” He added, “I don’t think aesthetically we have to start from scratch because we’re always inspired by each other. But in terms of opportunities and institution building and elevating the work, platforms, and scaling the audience—we have to.”

With the long-view of this unfortunate history resurrected in front of us, I asked the optimistic community builder whether he thought his show really signals an era that will have a significantly different fate. After a slightly off-guard pause he said, “I hope so,” pointing to the positive ripple effect movies like Get Out and shows like Insecure and Atlanta have had on the viability of his show. “But also I think Random Acts is super specific to what our community is expressing,” he added. “So what the next person does will be as different from Random Acts as Random Acts is from all that other work... It's hard to say if something as weird as this will be successful, but I don't even know if that's valuable. It’s more valuable that people are given opportunities to do whatever they want to do. Whatever that may be—even if it is more ‘traditional’—as long as they’re given the freedom.”