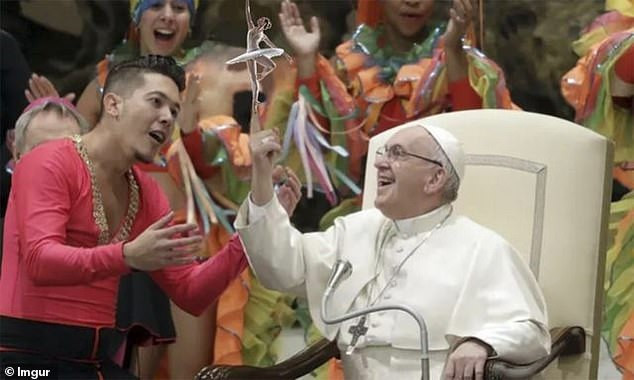 Before his first weekly audience of 2019 on Wednesday, the man atop a once-mighty church, the one that has faced an unprecedented reckoning over systemic sexual abuse this past year, appeared to accomplish something remarkable: He spun a soccer ball on his finger for three seconds. Pope Francis seemed genuinely thrilled as it orbited on his limb, and, if you were just judging by the look on his face, you would have thought he was witnessing real magic—that he had just discovered something truly new on this planet. It was his burning bush. His smile was nearly childish, and totally sincere: Holy shit, you could imagine his interior voice saying, underneath his ecclesiastical hat, check me out!

It was a wonder to behold, especially for the internet. Not long after the clip had been uploaded, the successor of the apostle Peter was memed. That's as much as he might hope for, I suspect, after a year of catastrophic revelations about abusive priests and cardinals, about broken reform efforts and payoffs, about lost faith and institutional decay. There he was, Pope Francis still, but instead of a rotating soccer ball balancing on his index finger, you had Earth, an uncooked pizza, a Harlem Globetrotters basketball.

Like most things online, it was all pretty amusing for a solid minute or two—or was for me, until I quickly realized a member of the Circus of Cuba, during a live performance, had placed the ball there. So no sorcery, or hidden talents, or acquired hobbies had been revealed. This wasn't even Bill Clinton playing the saxophone. It was just a Cuban clown amusing the most powerful holy man on the planet in the midst of a decades (or, really, probably centuries)-long nightmare.

Briefly, I felt fooled and maybe a little enraged that the pope was goofing around in public with everything going on—until I realized that actually, no: This was an ideal metaphor for the Catholic Church today. There's no illusion, no quick fix. The guy needs help. Isn't admitting that the most human thing there is?

Now, the pope is demanding assistance. In a letter to US bishops attending a prayer retreat in Illinois this week, Francis made some of his strongest statements to date on the sexual abuse scandal. The diction has slowly been getting more charged—he said that there was a "culture of abuse," that "our catholicity [was] at stake," that a "new approach to management" and "a change in our mindset" was required. It was eight pages long, and it arrived less than two months before he and about a hundred of the most high-ranking clergymen are set to descend on Vatican City for a summit to address the crisis.

"Despite my best efforts," he wrote of the meeting near Chicago, "I will not be able, for logistical reasons, to be physically present with you."

So the pontiff had to attend, quite literally, in spirit. In his note, following a scalding Christmas speech in which he urged priests guilty of sex abuse to turn themselves in and "prepare for divine justice," he bemoaned, yet again, the eroding trust in the institution he leads, and how it had to regain everyone's confidence—religious and laypeople alike. He insisted repairs were crucial regarding "our way of praying, our way of handling power and money, our exercise of authority, and our way of relating to one another and the world around us."

"The Church's credibility has been seriously undercut and diminished by these sins and crimes, but even more by the efforts made to deny or conceal them," he acknowledged, in a better-late-than-never sort of way. "This has led to a growing sense of uncertainty, distrust, and vulnerability among the faithful."

Francis told the 250 bishops or so gathered, whom he generally referred to as "sinners," that they would not succeed by “issuing stern decrees or by simply creating new committees or improving flow charts, as if we were in charge of a department of human resources.” Those decrees and committees and flow charts might be "necessary," but they were "insufficient," he continued, "because they cannot grasp and deal with reality in its complexity."

Francis did not yet, however, outline any actual steps—about how the Holy See might partner with secular courts, about how to properly compensate victims, about how to alter whatever it is that goes on behind the Vatican's walls. You can argue then, as I have, that these are just words, and we'll have to wait patiently until February (and probably a lot longer) for some more tangible sense of how Francis and the Church intend to move forward.

Still, this kind of language is something lapsed Catholics, like me, have wanted virtually forever: a gesture, seemingly, toward real confession. By my own estimation, it was the most genuine and relatively nuanced admission of wrongdoing from on high so far.

"Clearly, a living fabric has come undone," the pope lamented, "and we, like weavers, are called to repair it."

Or maybe better put: Together, they have to at least get the ball rolling on change—fast.

Lesbian Women Explain the Art of the Casual Hookup