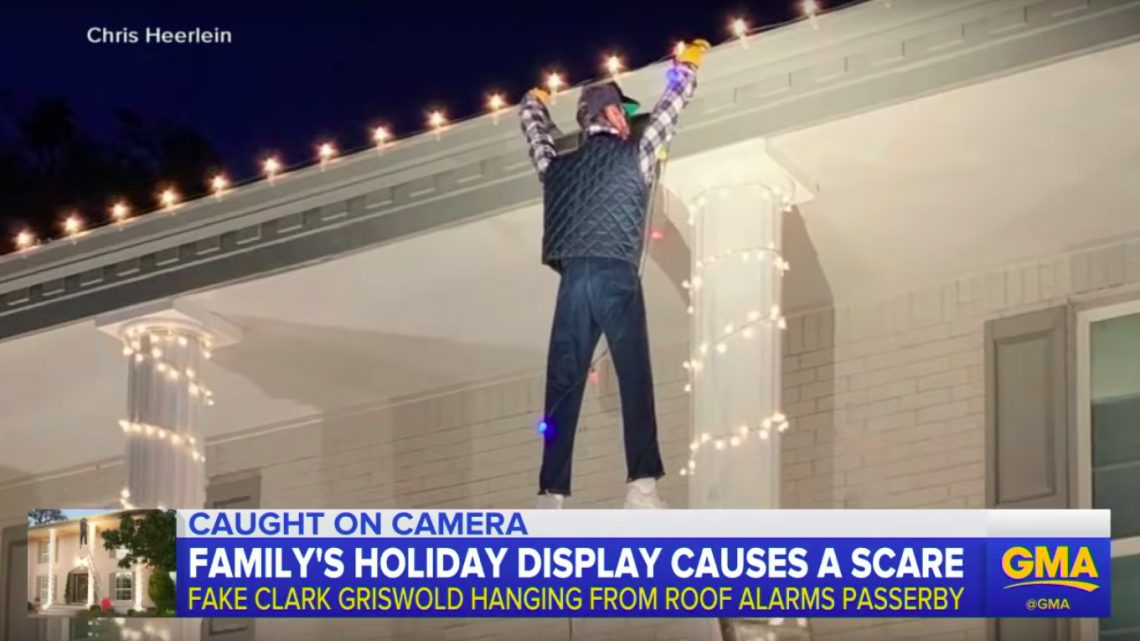 An exceedingly good guy in Texas ran to the rescue when he spotted what looked like a man dangling off the roof of a house in Austin last week—only to discover that the dude was actually just a dummy hung up there as a Christmas decoration, ABC News reports.

According to Good Morning America, the Heerleins had decked out their house to mirror that scene in National Lampoon's Christmas Vacation where Chevy Chase's character, Clark Griswold, slips on the roof and winds up hanging from the gutter by his fingertips. It might not be the most iconic scene from a Christmas movie of someone dangling off a building, but it's a good one, and they were hoping the dummy—dressed up just like Griswold, with a tipped-over ladder nearby—would help them win their neighborhood's annual Christmas decorating contest.

Maybe Alfred Norwood, Jr., had never seen Christmas Vacation. Maybe he didn't think too much about the perplexing fact that the "man" on the roof wasn't moving, or speaking, or, you know, showing any real signs of life, much less distress. For whatever reason—bless his heart—when Norwood spotted the dummy, he sprang into action, dialing 911 for help and, in the meantime, launching a one-man rescue mission.

"Oh, mister, please hold on," Norwood says in footage from the family's security cameras, as he frantically tries to straighten the downed ladder and save the dangling dummy.

"Can you reach it?" Norwood asks while shifting the ladder around, presumably confused as to why the guy isn't reacting whatsoever. "I turn around and start calling for help," Norwood later explained to GMA. "And nobody wanted to stop."

Eventually, Norwood realized that the whole thing wasn't actually an emergency and took off, but the Heerleins decided that his noble deed needed to be acknowledged. They tracked him down and gave him a gift card, according to GMA, along with their gratitude for being such a goddamn stand-up guy.

"Hundreds of people drive by this house every day, seeing that mannequin hanging up there," Chris Heerlein told GMA in a joint interview with Norwood. "And I'm standing by the one guy who cared enough to save somebody's life. Thank you."

The Heerleins have reportedly put up signs in their yard letting people know that the dummy is, in fact, just a dummy, in case some other Good Samaritan happens to wander by and try to save the thing. It's unclear whether they'll wind up winning that neighborhood decorating contest, but it's going to be hard to top a display so damn good it prompted a full-blown rescue operation.

I Opened the Most Ridiculous Advent Calendars on the Market