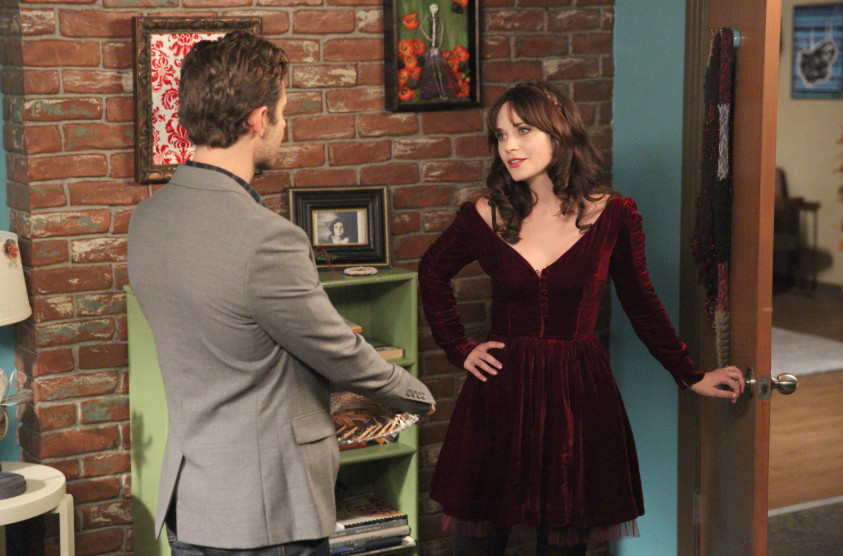 The Single Person Answer to Thanksgiving May Be Bangsgiving

For all those gearing up for another Thanksgiving filled with drunk aunts and uncles asking about your relationship status, fear not. There's another option that gives single folks the chance to stuff more than the turkey.

In a 2014 episode of Fox's Zooey Deschanel led sitcom New Girl, the gang of relationship-less friends decided to take Thanksgiving and their horniness into their own hands. The episode, titled "Thanksgiving IV" but more warmly known as the Bangsgiving episode, opens with douche-with-a-heart-of-gold Schmidt (Max Greenfield) reminding the group of his previous warnings that “winter was coming, and for the cold and wretched days ahead I stressed our need to take lovers and take them quickly.” The group faced a dilemma as winter had arrived and not one had a partner for what is also referred to as cuffing season. Thanksgiving was there, decorative gourds and all, and they all needed to get laid. This birthed a new tradition coined as Bangsgiving.

The rules of Bangsgiving are as follows: Names of all friends attending the Bangsgiving party are placed into a hat. In this instance it was a Pilgrim's hat worn by Schmidt in an air of festive whimsy. Everyone then picks a name from the hat and has to bring a date for the friend they picked. According to Schmidt, no one may leave the party until all are banged. Though as it's quickly pointed out, people should definitely be allowed to leave if they want, otherwise the event will inevitable veer into "kidnappy" territory. As it goes in sitcoms, hilarity ensues. But also some commentary on being single in your 30s.

Series creator Liz Meriwether and episode writer David Feeney look back at the episode, and give us tips on throwing your own sexy, non-kidnappy Bangsgiving celebration.

I think at this point in the series the characters are all in their 30s, and it gave some insight into what it’s like being single in your 30s, especially around the holidays. Was that something you considered in the planning of the episode, or just happen organically?
Meriwether: I feel like the whole first part of that season was just about dating in your 30s and how you have to take more risks than you normally would. By risks I mean open up your field. Open up who you’re looking for, a little bit. I think in your 20s everything can be organic, and it’s just like people hanging out and that’s how you meet people. But I feel like in your 30s, you end up going on blind dates, you end up getting set up, you end up on the internet, doing all those things. I think this goes to that. I had some experience with being single in my 30s so that was probably some of what had happened with me. Feeney has never been single in his life, so I don’t know.

Feeney: That’s kind of true. But what was good about the way that Liz did frame the season at the beginning was that there’s a big wedding at the beginning of the season. Because that’s what’s happening in your early 30s as well, right? People start getting married off. That pressure is there. Even if friends aren’t putting pressure, that pressure is kind of there. People start getting married and then it’s like, wait a minute, should I be getting married? I need to get on this.

Meriwether: The holidays are really hard when you are single, because it’s a lot of events and family events and having dates. I think that’s part of the wish fulfillment of the show. We probably all wish we could have a Thanksgiving with our friends instead of going home with our families and being the single one, which I’ve also done in my life.

Meriwether: I feel like “bang one out” is a terrible idea. It’s sort of like going to Vegas and being like, “I’m just gonna win back what I lost.” If you have feelings for somebody and you hook up with them in order to get it out of your system, you’re lying to yourself in a huge way.

During the opening scene at Bangsgiving, we hear the sensual, soulful sounds of Bill Withers’ “Use Me.” It’s like, “Ooh! They’re setting the mood!” What other songs do you think need to be included in a Bangsgiving playlist?
Meriwether: I mean, you don’t want it to be too sexual. I feel like that would be awkward. I feel like soul music is great. You gotta keep it up, but a little bit hint of something.

Feeney: Yeah, it should get slower and slower as the night progresses, I think.

What are the necessary elements that set the mood for a bangin’ Bangsgiving? I would think it would be hard to eat a lot of turkey if you’re trying to be cute and sexy.
Meriwether: I was gonna say that! I feel like it was really smart that they had a buffet. I know that we did it because we needed everybody to be in different places so we could do scenes. I think it was good for us, but I think in real life having some kind of buffet situation is great because you’re not stuck talking to your date that you don’t like. So [a buffet] might be fun.

I feel like the food is not center stage at Bangsgiving. I think you just want some basics out in a buffet style. I would just have a lot of alcohol probably. And then possibly a lot of dessert for after everybody leaves and things didn’t go well.

You touched on a few of the possible pitfalls of arranging a Bangsgiving, but is there any others that you think that I, a single 34-year-old woman, should try to avoid?
Meriwether: I feel like, just do it. Just jump in. What’s the worst that can happen? It’s Thanksgiving. I feel like there’s a holiday spirit that comes with holidays. I feel like you just have to do it and then it’s either a really good story or you meet the love of your life, or you forge a connection much like the Native Americans and the Pilgrims.

That turned out really well.
Meriwether: You forge a connection that ultimately leads to one group of people dying and giving up all their land.

So what you’re saying is it can’t go wrong?
Meriwether: I mean, if your options are Bangsgiving or going out to the woods and getting giardia from a pond fish, I think you should so Bangsgiving.

We see Friendsgiving is the big thing with younger and not-so-young single people to celebrate a holiday where all your drunk aunts and uncles are like, “Why don’t you have a boyfriend or a girlfriend?” Do you think this has the potential to be a trend? Like Bangsgiving is the new Friendsgiving.
Meriwether: I mean, if you write this article the world is our oyster. [Laughs] I feel like when it aired it didn’t start a trend. I think this is our best chance of that happening.

Feeney: This is the beginning of the trend right now! Let’s cash in!

I’m taking the responsibility of making this a thing very seriously. I will try my best.
Meriwether: Listen, I’ve been to plenty a family holiday single. My heart goes out to anyone going through that. I think the key is change the topic from whether or not you have a boyfriend to something lighter, like politics. Or just drink a lot. I mean, there’s some options. You can hide in the bathroom. You can hide in a room and watch the Bangsgiving episode.

Feeney: That’s a great idea! That’s the tradition right there.

This interview has been lightly edited and condensed for clarity.