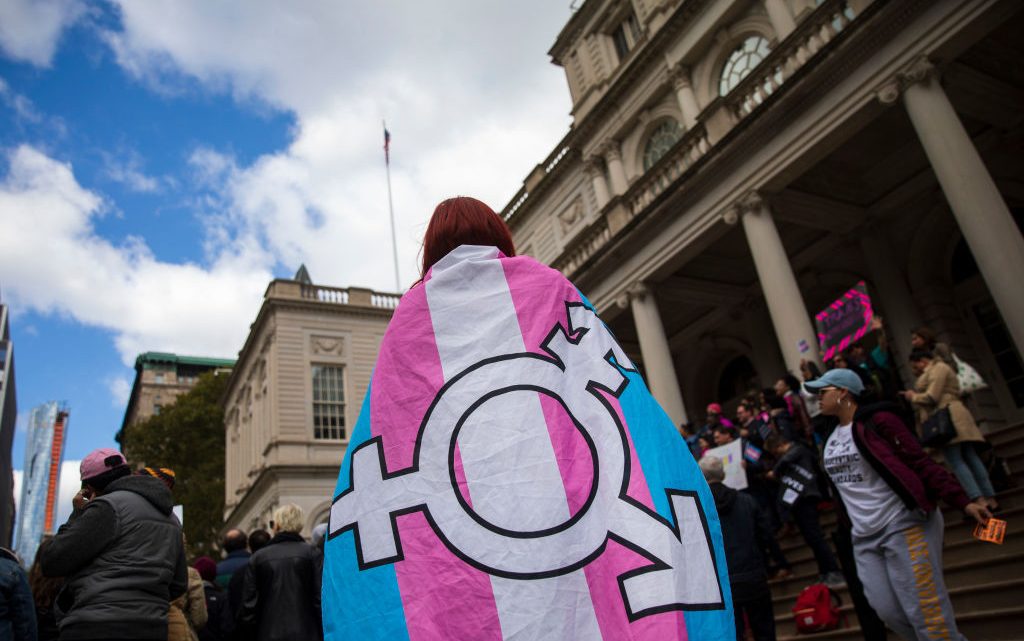 More Hollywood Liberals Should Be Showing Support for the Trans Community

Since the New York Times reported that the Trump administration’s Health and Human Services Department is planning a proposition to define sex by genitalia possessed at birth, members of the trans community have spoken out, calling the proposal an attack on their human rights and an attempted erasure of their existence. But in the first few days of the news, public outrage has stayed mostly among the LGBTQ community and its close allies, a trend most obvious when taking note of the celebrities who’ve spoken out.

This moment comes at a time of wide-spread solidarity for other causes that also effect cisgender people. Just three weeks ago, hundreds of men and women were arrested during the protests surrounding Justice Kavanaugh’s confirmation, a moment electrified by the testimony of a survivor of an alleged sexual assault who also happens to be a cis upper class white woman. Among those arrested was Amy Schumer, with other celebrities like Lena Dunham, Whoopi Goldberg, Maggie Gyllenhaal, and Erykah Badu also participating in protests though evading arrest. The March for Our Lives this past spring saw hundreds of thousands take to the streets for gun control. The main event in DC was star-studded, with Common, Kim Kardashian West, Kanye West, George Clooney, and others in attendance, speaking, or performing. In June there were nationwide protests against family separation at the border drawing an even wider range of celebrities speaking out, including John Legend, Chrissy Teigen, America Ferrera, and Kerry Washington. It even brought together the unlikely coalition of all five first ladies. And in 2016 actress Shailene Woodley memorably camped out and was arrested at Standing Rock protesting the Dakota Access Pipeline. There are certainly other examples but these are just a few.

But transgender rights advocates have historically had a hard time getting broader social justice movements to take up their cause. Racial justice organizations like Black Lives Matter and Black Youth Project have made trans issues part of their core values because of historical exclusion of the LGBTQ community from civil rights discussions and the fact that trans people of color experience higher rates of violence, homelessness, and poverty. Feminist movements have seen a fierce battle between intersectional feminists and trans-exclusionary radical feminists, and even within the LGBTQ movement there’s a longstanding culture of excluding or discriminating against trans people. Many of the Trump administration’s moves to roll back Obama-era protections highlight these schisms. And until this point, the Trump administration’s wide-ranging systematic effort has received little sustained attention outside of advocacy groups and LGBTQ media outlets.

While the first few days of protest have amplified voices within the trans community, a significant undercurrent of the messages from the community have been calling on cis people to show greater support and solidarity. One viral tweet plainly concludes, “Biological essentialism is violence. As is any silence from any cisgender allies at this time, in the US, in the world.” The statement has echoes of the galvanizing Black Lives Matter slogan “white silence is violence.” Monday night’s rally in Los Angeles stated on its Facebook event: “We want to see you be our comrades in times of anger and pain, not just saying that you support us but actually doing it. Let's see if you can activate the same way you activated for #marriageequality.” Los Angeles rally attendee Vic Gerami who has been involved in LGBTQ activism in California for over ten years says, “The turn out at the rally was great. It could have been better. I would’ve loved to see more non-trans people there.”

Since social media reactions can look drastically different from one person’s network to the next, cultural figures often serve as a bellwether guiding a larger public into matters they should be aware of and can spur larger participation. Their buy in and support can be vital for building up resistance and awareness.

“It is a time that all of our friends and family that feel the importance of this come out and support, including celebrities. Celebrities have a platform to elevate this issue and expose it for what it is,” Germani says. As he explains, trans rights organizations’ resources are often spread too thin to give attention to wrangling new high-profile voices as they’re focused on tackling a range of issues from housing to job search, health care, and counseling.

“During my time fighting for [marriage equality in California], reaching out to celebs becomes kind of complicated. You have to sell it to publicists, sometimes the managers or publicists are gatekeepers who don’t really understand, and then if you can get to the celeb and figure out how to collaborate in a way that they feel comfortable. It’s a big production,” Germani says. “Ideally what would be great would be if there’s a rally like last night that they just come out and support, be visible. Or just use their own platforms to voice their outrage.”

Sunday night’s rally in New York City had a number of transgender or queer actresses present, like Indya Moore from Pose and Sara Ramirez of Madame Secretary and Grey’s Anatomy. Omar Gonzales-Pagan from Lambda Legal, the organization that helped organize the event, was happy with the results and added, “We certainly hope that as [Sunday’s] news begins to set in more and more people will speak out against this outrageous proposal divorced from reality, science, and the law, including cultural influencers, businesses, and everyday Americans, whether LGBTQ or not.”

Actress and advocate Alyssa Milano stepped up to the plate Tuesday at the invitation of transgender journalist Diana Tourjee, writing a powerful article on Broadly about the intertwined struggle of cis and transgender women. Comedians Abbi Jacobson, Ilana Glazer and Amy Poehler also recorded a video, as did Schumer. And there have certainly been a number of good examples of allyship at the grassroots level. But recent high-profile messages of solidarity from cultural figures have by and large been coming from long-time allies like Milano or Lady Gaga.

Orange Is the New Black star and trans-rights advocate Laverne Cox was an early voice around the proposal, speaking passionately via her twitter. Other celebrities who are part of the LGBTQ community were quick to react as well, from trans icons Janet Mock and Chelsea Manning, to queer television producer Lena Waithe and cast members of Netflix’s Queer Eye. Republican trans advocate Caitlyn Jenner found herself in a tough spot, needing to say something as a self-proclaimed voice of the community, but was swiftly dragged in her mentions for having voted for Trump.

It’s been hard to come by high-profile figures giving voice to the issue who don’t have a personal stake in the matter. While some Democrat politicians and journalists have come forward on their platforms to speak out against this proposal, the LGBTQ celebrity community has been most engaged in the protest.

As tensions rise and this concerning pattern of LGBTQ affiliated cultural figures carrying the labor of speaking out continues, it reminds us not to assume the increased solidarity we’ve seen for other causes extends to all important movements for equality. While this document unearthed by the New York Times is still just a discussion point with plans of a possible proposal, and we don’t know how close it will get to becoming actual policy, the memo’s existence still perpetuates violence against and erasure of trans people. It ignites further marginalization of a vulnerable community.

If the proposal is accepted by the Justice Department, litigation will follow, and no doubt so will even more protests.

At a time when nearly everyone thinks about their public statements in terms of what makes sense for their brand, some social issues are more “shareable” than others. Celebrities have little choice but to comment on sociopolitical matters when they reach a fever pitch, as we saw after the Weinstein scandal broke and the #MeToo movement reemerged. But our society, and certainly our cultural figures, still struggle to show early solidarity with marginalized communities that don’t relate to their brand. Celebrities, perhaps more than anyone in our society, often embody this tension of brand control vs. moral conscience. But they’re also well-positioned to help tip the scale.

Transgender Los Angeles rally attendee Selene Whittington says when she first heard the news of the memo she, “felt betrayed because we’re a minority but we’re Americans at the same time. We’ve come so far to transition, to be ourselves, to feel comfortable going out into the world and live a normal life. I think this set us back a few steps and it really made us fear for our safety. … But it’s also bringing us together and allowing us to show each other that somebody out here is going to stand with you and march alongside you in this time.”