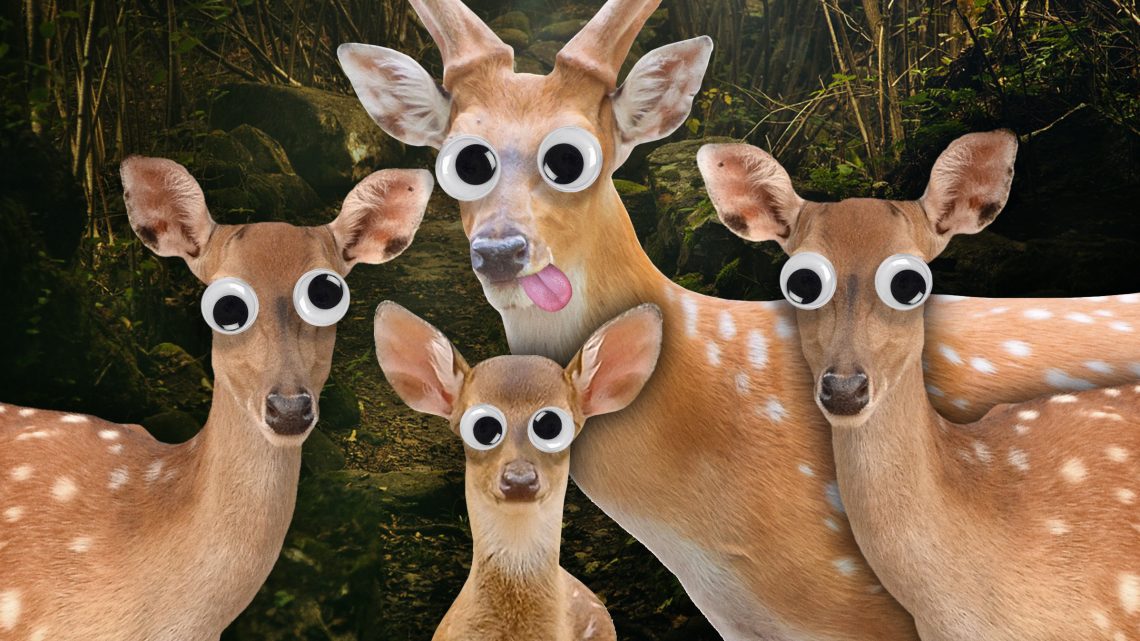 I grew up in a neighborhood in Central New Jersey that had once been an apple orchard. A lone tree bearing the fruit stood in my backyard, a Garden of Eden in the middle of suburbia, and when we were children, my brother and I used to pluck the golden, deformed-looking apples from its branches and throw them as hard as we could at each other. Which is to say, we never ate them. But the goddamn deer fucking did. I became so familiar with these local animals that I could literally identify them by their physical attributes—oh, there's the buck with the gimpy leg come to feed!—and from spring to fall, when the weather was warm, they would stand on my lawn, perpetually dumfounded at nothing in particular, and shit all over the place.

It was a minor inconvenience of my youth—unlike our neighbor, no one in my family got any ticks—but their constant presence was enough for me to develop, perhaps unjustifiably at first, a strong hatred of them, these gigantic "rats with hooves." (I got very good at scraping their crap off the bottom of my shoes with sticks.) They were truly a burden in this forested region. We were overrun. Without enough food to survive, they killed scores of vegetation—and year after year, the citizens of my great land would argue about whether or not government-based hunts were ethical to cut down the deer population. (They still do.) There were days in my adolescence that I'd hear a chorus of gunshots echoing throughout my hometown, and knew the creatures were falling to their demise. I now remember those sounds warmly.

Really, though, it wasn't until I was about to enter college, when my mother was driving me to Boston for freshmen orientation, that I became certain I had always been right: Deer suck.

It was the summer of 2009, and we were traveling up the Merritt Parkway in Connecticut, a highway, like many in the Northeast, entirely bordered by woods. I was reading a book in the passenger's seat, when, for no specific reason, I decided to look up and, out of the corner of my eye, saw a doe descending from the sky. Later, it became pretty clear what had happened: A person speeding on the opposite side of the freeway had smashed into the clueless beast with his vehicle, which propelled her—that poor, worthless thing—at least 30 feet into the air, over the median, and onto the other side of the road, where she landed on the hood of my mom's CRV. She exploded on impact, her blood and guts pouring across the windshield, and collapsed into the middle lane. The engine caught fire, and we pulled into the shoulder in a panic, where a nice man, a volunteer EMT, let us wait with him in his BMW until the cops showed up. The pleasant stranger filled the time by repeatedly telling us how lucky we were to be alive. When a trooper finally got there, he grabbed the dead deer by the legs and flung her onto the grass. I immediately told this tale to everyone when I arrived, late, to Boston University's campus. It didn't seem like a great omen, right before a major life transition. It's been about ten years, and I continue to have nightmares about it.

All that said, I'm certainly not special. These sorts of deer-related, vehicular horror stories are incredibly common. (I encourage you to partake in a cursory Google search of people hitting deer, or deer hitting people.) Only a few days ago, for instance, a buck crashed into a New Jersey runner, who still managed to finish the half marathon she was participating in. And here, too, is one of those assholes, just about a week ago, nearly smashing into a cyclist after being struck by a car:

Are you shaking with terror yet? Are you in awe of the utter stupidity of this species? Every time I read about, or watch, one of these accidents, like a young Proust biting into a madeleine, I'm involuntarily transported back to that day in Connecticut—and a moment-by-moment replay goes off in my brain. I say this not to invoke pity. I'd simply like to argue that deer are not adorable or serene or majestical. Rather, they are useless, unintentional assassins, and do not deserve our sympathy.

I'll admit: There's a case to be made that we're the ones actually fucking up the deer, and not the other way around. After all, we're the species who knocked down trees and paved the ground with asphalt. That's a fair point. But it's us or the deer, man. Do whatever you like, but I'm choosing us. I suggest you do the same while the numbers are still on our side. That may not be for too much longer.

It's estimated there are around 30 million deer in the United States, which is around 30 million too many. They have a propensity to reproduce at an unreal pace; in 2013, people were asking if they were a bigger threat to eastern forests than climate change, and while Scientific American admits that the "rebound of white-tailed deer" is "one of the nation's greatest conservation success stories" (there are close to 20 million total), their abundance can be a cause for concern for "humans, other wildlife, and even for the deer themselves, who must compete for dwindling forage source." (They can damage agricultural crops as well.)

They also spread Lyme disease, of course, which is once again raging in the Northeast; there are 30,000 cases of the disease reported by the Centers of Disease control annually, "making it the most commonly reported vector-borne illness in the United States." Lyme is awful and miserable, and causes ungodly bouts of fever, fatigue, and joint and muscle stiffening and swelling. (When the singer Daryl Hall contracted it in 2005, he went on The Howard Stern Show and, not jokingly, said, "Kill all the fuckin' deer!") It ruins lives. And it wouldn't be the problem it is if it weren't for fucking deer. If that's not enough to piss you off, consider this: Your dog can get it, too.

No matter where you find yourself in the US, they're a scourge. This year alone, cars and deer have collided on our nation's highways and roads some 1.33 million times. In West Virginia, from July 1, 2017, to June 30 of this year, an average of one out of 46 drivers there hit a damn deer. And that's even in the midst of a 2017 hunting season that saw the state kill 108,160 of the things, these cockroaches of the woods. In my home state of Jersey, drivers fare a bit better, but the number is still an unacceptable one in 232. One of every 173 Vermonters can expect to hit them as well, and the Vermont Fish and Wildlife officials say, in the autumn months, the chances of slamming into one on the street doubles. An average encounter on the road with a deer costs drivers $4,341 in damages and repairs.

I have no idea how much it cost to fix my mother's Honda. Somehow, on that fateful afternoon, it wasn't totaled. A tow truck driver brought it to his shop, and we rented a Ford Fusion and eventually made it to Beantown. Because we were too distracted with the fact that we almost died, when we went to retrieve it, we didn't notice the guy had stolen the tires and replaced them with spares until we returned home.

I've forgiven him, though. Because I've always blamed the deer.

A recession is coming. Who will take the blame?