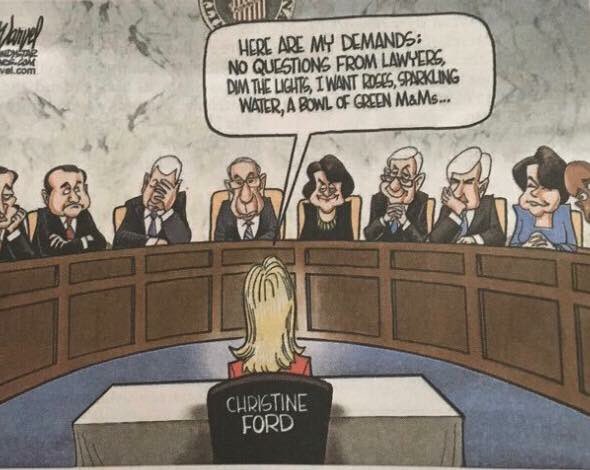 This Newspaper Ran a Wildly Offensive Cartoon of Kavanaugh’s Accuser

In the last week alone, there's been a seemingly endless amount of new developments in the saga of Supreme Court nominee Brett Kavanaugh. He's been accused of sexual misconduct by multiple women and offered up bizarre defenses in response, all after the initial accuser, Christine Blasey Ford, agreed to testify in front of the Senate Judiciary Committee on Thursday.

But on the same day she and her lawyers came to an official agreement, the Indianapolis Star ran a cartoon attempting to poke fun at the requests they made regarding Thursday's hearing:

The cartoon, which shows Ford making a series of ridiculous demands, including "roses, sparkling water, a bowl of green M&Ms" clearly ridicules the fact that she and her lawyers had to make a series of requests for her own safety. It also seems to make light of her accusation, sexualizing her, making her look irrational, and suggesting that she's looking to gain something from her testimony—the very types of criticism that make it difficult for women to report sexual assaults in the first place.

The outcry to the comic was swift. Readers and Twitter users called out the Indy Star for its insensitive depiction, while others decried its misogyny, and one even expressed sympathy for female journalists who work there. Some readers even decided to unsubscribe from the local paper.

According to the Washington Post, the same artist who drew the comic, Gary Varvel, also drew a cartoon back in 2014 that depicted what appears to be a family of immigrants climbing into a white family's home through a window on Thanksgiving. Backlash was so loud the Indy Star edited the cartoon before apologizing.

On Monday, the Indy Star had to apologize again in a statement, saying that the latest cartoon "did not meet our high standards," explaining that it was run next to another cartoon "that presented an opposing view."

"...the Indy Star also has a responsibility to promote a civil discourse and to present diverse viewpoints in a way that does not demean or appear to belittle anyone who says they are the victim of a sexual assault," executive editor Ronnie Ramos wrote. "Our—and Varvel’s—intent was not to attack Dr. Ford," he added.

Varvel also weighed in: "My cartoon was focused only on Ford's demands, not on whether she was telling the truth. This is a point I should have made clearer in my cartoon. As a husband and father of a daughter and granddaughters, I take sexual harassment very seriously."

Still, one could argue that painting Ford as irrational is just as bad as questioning whether or not she's "telling the truth." It's all part of the same narrative of discrediting a woman's authority and ability to tell the story of her own life and her assault—a particularly problematic thing to print in the same paper that was instrumental in covering the convicted serial child molester Larry Nassar.

Trump’s ‘She Was Drunk’ Argument Is a Disaster for Republicans

Are Black Parents Partly Culpable in their Daughter’s Hair Struggle?