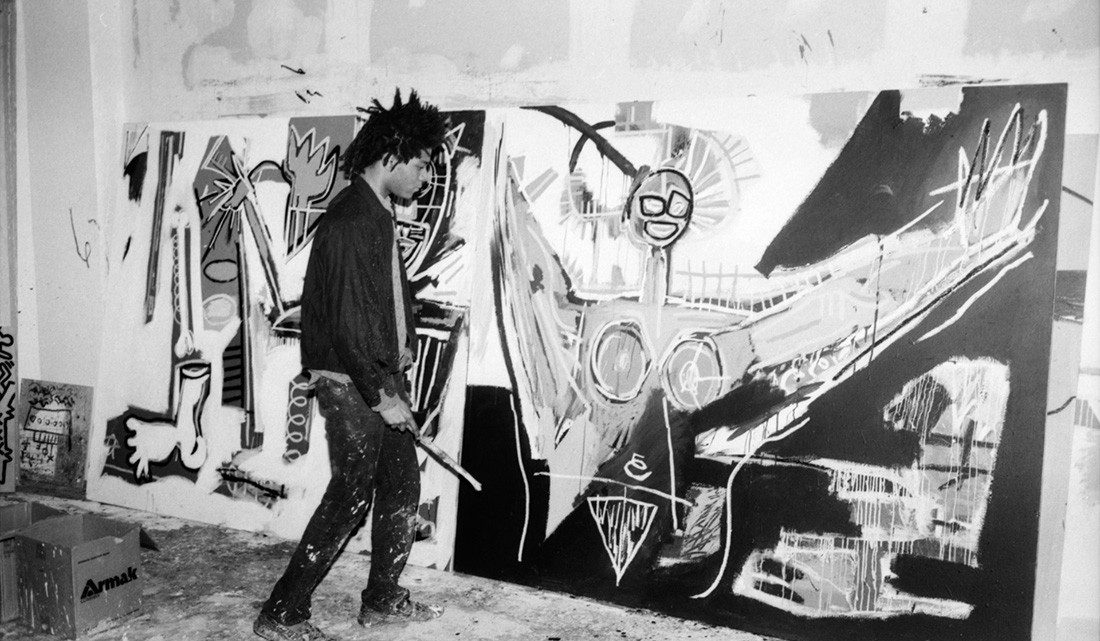 ‘Basquiat: Rage to Riches’ Is the Last Doc We Need on the Iconic Artist

Whether you encounter his art in a museum, in a house, on a T-shirt, or on social media, Jean-Michel Basquiat’s urgent, frenetic interpretation of our world is unmistakable. From the bulging discolored eyes and sharp protruding jaw of Untitled (Head), to the jazz musicians sporadically surrounded by crossed-out words in Horn Players, his paintings reconfigure our world. The artist who made these works is not iconic simply because he was the first modern American to sell a painting for over $100 million, or because he died at the eerie age of 27. He’s legendary because the coded visual language he created continues to keep audiences engaged in a quest to understand him better.

That quest has inspired a dizzying number of movies about his life, including the 1996 biopic Basquiat, a 2010 documentary, and a 2018 documentary specifically about his teenage years. There are also more than ten major books about him. The new American Masters BBC Studios documentary, Basquiat: Rage to Riches, takes another shot at telling us how the man transformed into myth. The movie aims to provide a holistic view of him as a person by incorporating family members who had previously shied away from the spotlight. But in offering a grounded, humanizing perspective, the movie—perhaps unintentionally—reveals that behind all the incredible work is not some art messiah. Instead, Basquiat was just a normal, ambitious dude.

At a screening on August 30 at the Brooklyn Museum, his two sisters Lisane and Jeanine Basquiat were present. They’re both Brooklyn moms in their early fifties. For people who manage the estate of one of the most celebrated artists of all time, they weren’t particularly artsy or animated storytellers. But they spoke with a tender desire to honor their brother’s legacy. Their decision to finally participate in a movie about him came about because they didn’t appreciate some of the pervading narratives around him—that he was estranged from his family, that he grew up poor.

At the screening and in the film, Basquiat’s loved ones describe him as having a pretty pleasant childhood in a middle class home, visiting museums with his mother, living with his father, and playing in the streets with friends. His sisters even reminisced about the time he once corralled them to yell “I’m black and I’m proud!” in the backyard just for the heck of it. When his sisters described his decision to leave his father’s home for the tough streets of Downtown New York City in the 1980s, it was not due to a lack of love. Instead, it was the ambition “burning inside of him,” Lisane said.

Hearing ordinary, familial narratives like these about a guy who’s often framed as otherworldly made it clear that Basquiat might have actually put the most extraordinary version of himself in his work. Basquiat himself even criticized how at times the mythical idea of him as a crazed, explosive black artist had a racist tinge, telling an interviewer he's "not some monkey man or whatever these people say." In the opening scene of the film, Lisane plainly says, “If you want to know what there is to know about Basquiat, the place to go is to his work.” That general sentiment extends throughout the movie.

The first footage we see of Basquiat is an interview, where he is asked, “What are you angry about?” After a long pause where he looks visibly frustrated with the question, he just chuckles to himself. There are a number of other scenes like this where the artist comes off as a man of few words with a soft-spoken demeanor that is in direct contrast to the gripping assertiveness of his art.

His temper did come out in a few instances, though. Particularly, when he faced racial injustice. He would get frustrated explaining to interviewers what it means to be a black man in the white art world. Once, he got so mad at a collector who brought him a bucket of Kentucky Fried Chicken that he chased him out and threw the food at them. But while stories like these contribute to our understanding of his artistic urgency, they’re mere compliments to the mysterious visual world he created on canvas.

People look at a painting titled 'Dos Cabezas' by Jean Michel Basquiat, depicting himself and Andy Warhol, in the exhibition 'Basquiat: Boom for real' at the Barbican in London on September 20, 2017. (Photo credit: CHRIS J RATCLIFFE/AFP/Getty Images)

Though many have done the same, the film tries to rundown the root of Basquiat’s genius and success. They relay stories of his braggadocious nature, from the way he reassured everyone he met that he’d be famous, to the lunch with Andy Warhol he skipped, only to enter at the meal’s end with a large-scale portrait of the two together. The documentary also tries to find the source of his style, touching on how he worked on multiple paintings at once and employed the influence of hip-hop, jazz, and avant-garde poetry in his aesthetic. Unfortunately, none of these moments in the film come close to the plain spoken words of Lisane Basquiat at the screening. When asked by an audience member how her brother took over the white art world with his black-centric creations, she simply said, “He pulled it up out of himself.”

Considering how normal his family and childhood appear to be and how humanizing his loved ones’ stories about him are, the most mystifying thing about his life seems to be that he was able to get in touch with a fierce vision burning beneath the surface.

Leaving the screening for the film, I felt the answer to the enigma of Basquiat might be simpler than audiences would like to admit. He had a visual language inside of him and he expressed his luring worldview mostly in his art. While his work almost reflexively sends viewers on a quest to better understand the man behind the puzzle, he already gave us everything there is to know.

Does Black Power Have an Artistic Aesthetic?