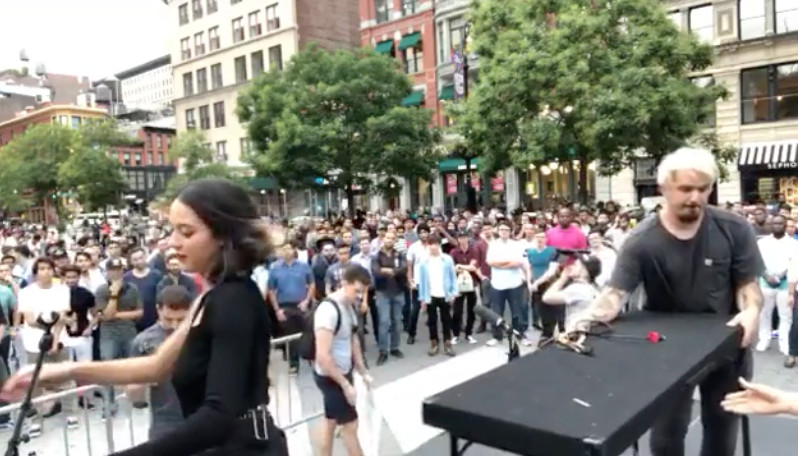 Aside from being a sad, demoralizing hellscape, Tinder is festering with liars and cheats, from rich dudes who pay other people to flirt for them to serial dine-and-dash daters. There's a weird combination of relative anonymity, blind hope, and desperation at play on the dating app that makes it ripe for deception—something one young woman in New York took full advantage of this weekend, pulling off the greatest goddamn scam in the history of online dating.

According to New York Magazine, Natasha Aponte planted the seed—or, rather, dozens of seeds—for her scheme about a month ago, when she matched with a boatload of dudes on Tinder, and gave them all the same spiel. As one man who claims he was duped by her tells it, her message went a little something like this:

She apparently dropped off the grid for a few weeks, then resurfaced, asking every dude she messaged if they wanted to meet at Union Square in New York City to catch a DJ set and get a drink—which, ostensibly, would've been a one-on-one date. When they showed up at around 6 PM on Sunday to link with her, they found themselves in a sea of guys who'd all matched with Aponte on Tinder. They just didn't know it yet.

In footage from Sunday's mass meet-up, you can see dozens of dudes awkwardly standing around a DJ playing a set on a stage. After a good 35 minutes, Aponte sashayed onto the platform and let her dozens of "dates" know what the hell was going on:

"Do you have what it takes to compete against everyone here to win a date with me?" Aponte called out to the crowd, eliciting chants of "bullshit" and "shut the fuck up" from a few disgruntled dudes. But most of the guys stuck around, only to be told, quality by quality, things that would disqualify them from taking her out. While two "referees" combed through the crowd, Aponte announced that she wouldn't date anyone who "is a tourist or doesn't live in this country," is "named Jimmy," is "looking just to hook up," or is "under 5'10"." Oh, also, "no beer bellies, no long beards, no bald guys, no khakis, no Toms."

Once she'd cut the number of candidates down through a series of "eliminations," she apparently made the men who hadn't been axed sprint and do pushups, then put them all in a line and swiped left and right on them IRL, a man who claims he was conned told New York Magazine. And you thought romance was dead!

It's unclear if anyone emerged victorious on Sunday, or whether Aponte actually agreed to go on a date with the dude who came out on top. According to New York Magazine, the whole thing was a little fishy: Aponte has since made her Instagram private, gone dark on social media, and—when they hit her up to ask about the scam—directed them to Rob Bliss Creative, a viral video agency.

Sure, this might have all just been a scheme to achieve viral glory, but it was a damn fine one. If nothing else, it was worth it for this tweet alone:

Turkey: Lira Bulls and Bears Duke it Out On Twitter

A Man Fell Into a Massive, Fake-Looking Hole at an Art Museum