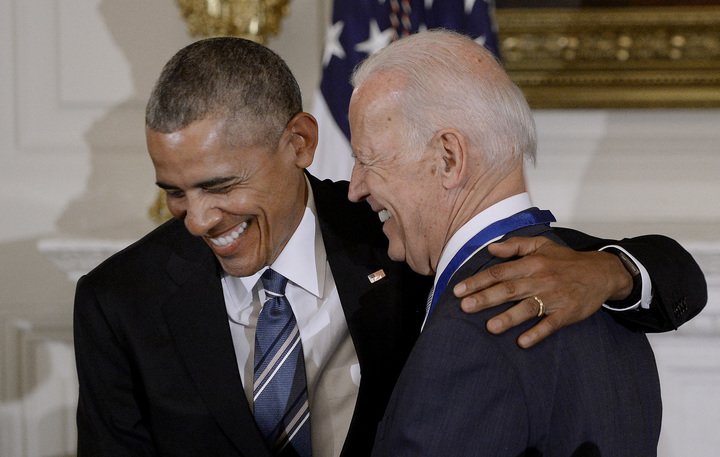 People really liked Barack Obama. According to one recent survey, a plurality of Americans consider him the best president in their lifetime. He left office with solid approval ratings and low unemployment after rescuing Democrats from eight years in the wilderness under George W. Bush. He passed landmark laws like the Affordable Care Act and the Lilly Ledbetter Fair Pay Act, which extended the statute of limitations for equal-pay lawsuits. From police reform to LGBTQ rights to looking out for undocumented children whose parents had come to the country illegally (a.k.a. DREAMers), he staked out new ground on a host of polarizing issues. With Donald Trump dismantling so many of his achievements—from the Consumer Financial Protection Bureau watchdog to the Clean Power Plan and Paris Accords—while targeting immigrants for deportation and banning travel, the appeal of just turning back the clock somehow, of playing to fond memories of the Obama years, is real.

So real, in fact, that it seems virtually certain someone very close to Obama will make a run at the White House in 2020. On Monday, Eric Holder—the first African American attorney general in US history and an Obama cabinet member for five-plus years—confirmed to Stephen Colbert that yes, he was mulling a presidential bid. Meanwhile, Obama's former VP Joe Biden is looming in the wings, offering (if nothing else) the alluring prospect of a scrappy populist who might be able to mix it up with Trump and maybe even dispute the idea that he magically fixed the economy overnight. (Trump has suggested it'd be a "dream" to face Biden, which is probably best understood as an expression of mortal fear.)

But while nostalgia for a simpler time—when the president wasn't coddling white supremacists or firing off unhinged tweets at 5 AM, and instead was passing modest but progressive laws—is perfectly understandable, it's not a strategy. Tying themselves to Obama's legacy, and the mixed records of the people who served under him, won't win Democrats back the presidency. In fact, it might dig them an even deeper hole than the one they're already stuck in.

Some Democrats and fellow travelers on the left already know this. The star of the moment—the Democratic Socialists of America (DSA)-affiliated Alexandria Ocasio-Cortez, a 28-year-old who beat a powerful incumbent in New York this month—certainly seems to. After phone-banking for Obama in 2008, the New Yorker reported, she went all-in on Bernie Sanders's insurgent (democratic socialist) campaign in 2016, frustrated at the status quo of centrist Democratic politics, rejecting Obama's hand-picked successor in Hillary Clinton. Ocasio-Cortez, to be clear, didn't win her primary (in her district, tantamount to the general election) because she's some kind of wild radical—she's not determined to seize the means of production or overthrow the capitalist state. (She also didn't win by slamming Obama, it should be noted.) But she knew tinkering at the margins of a broken system, that electing milquetoast Democrats just because they were Democrats, wasn't enough for her Bronx community, much less the millions of others left out of the country's success. It was a winning message.

Obviously, a very liberal district's Democratic primary is not some kind of barometer for national electoral success. In fact, some of the party's elders, as the New York Times recently reported, remain flummoxed at the idea that Sanders or someone else outside the mainstream might steer them toward disaster in a winnable 2020 campaign. And they've got reasons for those beliefs. Obama hardly ran left-wing campaigns back in 2008 and 2012, instead embracing moderate policy stances while savaging his opponents as out-of-touch rich guys more comfortable plotting mass layoffs in corporate boardrooms than eating apple pie. But credible data analysis since the election has shown that even if many Obama voters flipped to Trump, a big part of what happened in 2016 was the failure of a lot of Obama supporters to show up to the polls at all. They were sympathetic to Clinton and the Democratic Party, but may simply not have been all that excited by the prospect of backing a hand-picked successor, of coronation rather than inspiration.

To be clear, Holder is an appealing figure: an accomplished lawyer who served in the Justice Department under Bill Clinton, challenged Americans to stop being a "a nation of cowards" on race as early as 2009, and helped usher in big-time sentencing and other reforms. More recently, he's been leading an anti-gerrymandering campaign called The National Democratic Redistricting Committee, correctly identifying voting rights as perhaps the greatest threat to American democracy, certainly more than Donald Trump's bromance with Vladimir Putin. And Biden, for his part, would bring the kind of bluster and teflon necessary to mix it up with an unhinged clown like Trump, along with plenty of experience in retail politics and the rigors of a national campaign.

But neither man seems, at least so far, to be offering much in the way of a narrative that resonates with The Resistance, with the increasingly DSA-friendly (if not actually Socialist) tenor of the Democratic electorate. In fact, Holder's first big move after leaving the Obama administration was taking a plush gig at white-collar law firm Covington & Burling, a favorite of the banks he refused to prosecute after the financial crisis—a crisis that helped make Trump's populism plausible. Biden, meanwhile, as my colleague Eve Peyser has noted, has a long, complicated record that doesn't stand up all that well in 2018. Among other things, he weirdly seems to have decided to position himself as a reasonable moderate keeping angry leftists at bay. His role championing the 1994 crime bill that helped usher in the modern era of mass incarceration is an eyebrow-raiser, as was his presiding over the grilling of Anita Hill at Clarence Thomas's confirmation hearing, among a handful of other questionable votes and stances on issues of race and gender. Can he really appeal to voters who who want to abolish ICE (a plurality of Democrats and young people in general, according to one recent poll) and kick sexual predators out of elected office, and might not vote for someone who seems soft on those issues?

There are plenty of other potential candidates out there, from Elizabeth Warren to Cory Booker to Kamala Harris to less-nationally-known figures like Eric Garcetti in Los Angeles and Mitch Landrieu in New Orleans. Some of them, like Booker, have longstanding ties to or share issue stances or even worldviews with the 44th president. But none of them seem to be depending so completely on their affiliation with Obama to have a claim to the presidency. Booker has taken aggressive stances on marijuana legalization and trying to block Brett Kavanaugh from the Supreme Court. Harris has a mostly solid record on LGBTQ rights and is leading the charge to make Congress more inclusive. Garcetti and Landrieu have their own accomplishments at the local level. And Warren, the subject of a big New York cover story this week portraying her as a possible frontrunner, has long been a singular voice on behalf of working people who've been screwed by the system. What are Holder and Biden offering besides good memories?

As Anita Dunn, a prominent Democratic strategist who served on both of Obama's presidential campaigns, wrote me Tuesday, "No one gets elected President as part of a legacy. Serving in an Administration might open a door for a voter to listen to you, but then it is your vision, your principles, your goals that you have to sell them on."

No one's saying Biden and Holder lack visions or principles or goals; both have distinguished careers in public service. But if they can't put meat on the bones, if they can't show what their most appealing ideas actually look like in the Trump era–and fast—they risk looking like throwbacks at a time when young voters are desperate for someone to take them into the future.

Juggalo Couples Tell Us How They Fell in Love

We Need More Artists Like This Street Performer-Turned Multimedia Wizard