Once and for All: Is the Tushy Bidet Worth It?

To be clear, I tested the Tushy bidet already knowing I love bidets. I’ve been hooked on the fantasy of owning my own bidet ever since I had the good fortune of trying one at this bomb udon spot in Brooklyn, and started to wonder what it would take for me—a plumbing cretin with no toolbox or motivation to own one, if I’m honest—to have a bidet-equipped bathroom. They all seemed pretty pricey, pretty complicated, and too much work for my lazy ass. So for two years, that udon bidet became my Fata Morgana (with the exception of solo noodle dates).

Luckily, the team at Rec Room legit talks about bidets and disruptive bum wipes about once or twice a week. Which makes sense. We’re obsessed with knives, orgasms, plant-based (and meat-filled) cooking, and, by proxy, all the maintenance that occurs during the interim of those pursuits. (In layman's terms, general hygiene; in expert terms, prepping that sweet peach for training plugs.) The question was, how easy would it be to install the Tushy, and how good would the waterworks be for an under-a-hundo bidet? I explained all of this to Tushy, and they were kind enough to let me put their baby through the rectal ringer. I had no idea what was being sent my way, so it was like Christmas for breakfast when the following booty spa setup landed at my door:

This is the whole shabang, man. The Tushy System includes their staple classic bidet, as well as a smorgasbord of other trinkets designed to make your number twos your number one favorite activity; there’s an ottoman for (purportedly) bettering your poo posture, a biodegradable scrub brush, and a standing toilet paper dispenser. 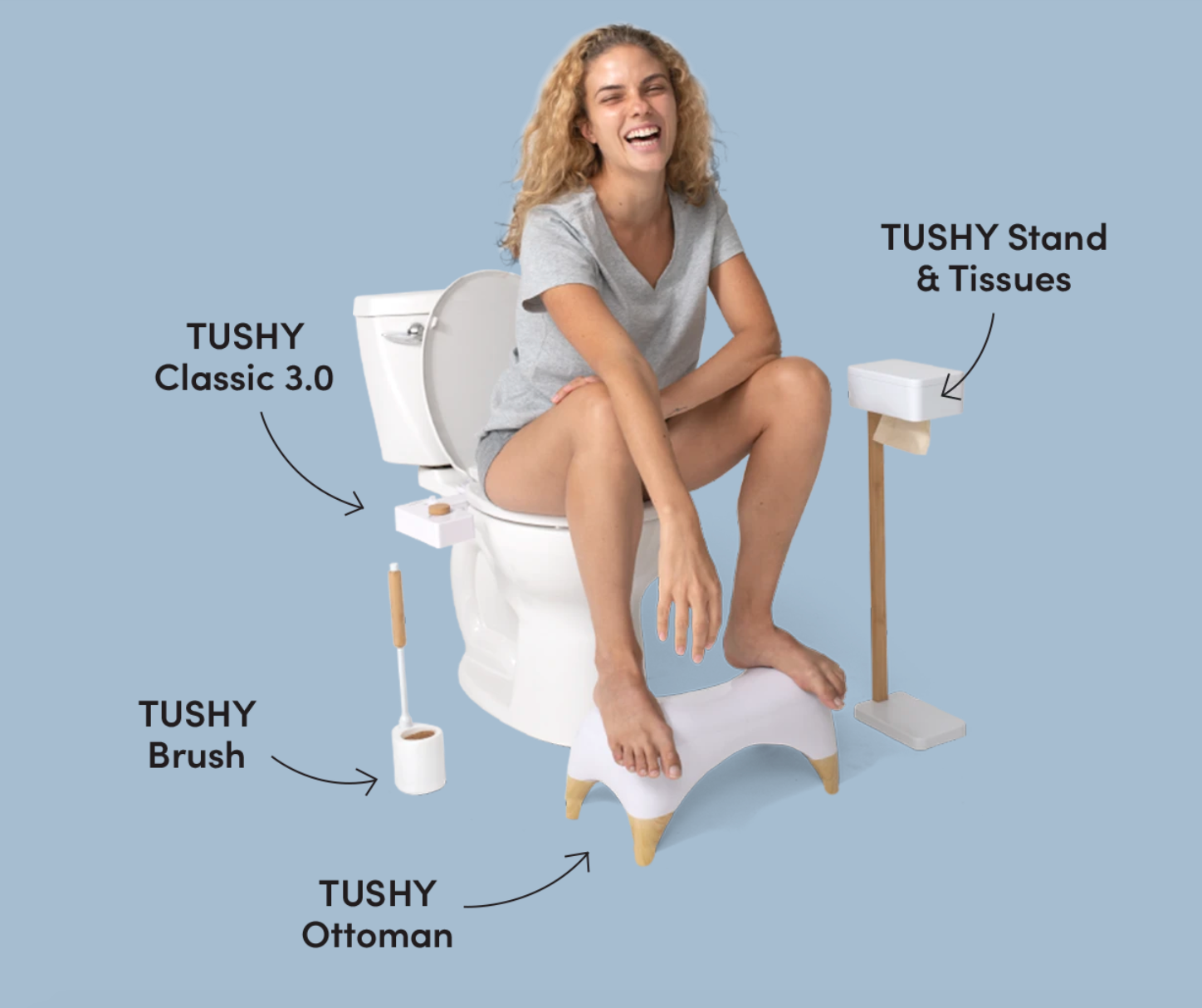 All of it arrived in environmentally friendly cardboard packaging, because aside from being passionate about sparkling derrières, Tushy is also trying to make us more conscious consumers. When it was founded in 2015 by Miki Agrawal, the company set out to both raise awareness about the amount of resources that are wasted in the bathroom sans bidet (it takes 37 gallons of water to make one toilet paper roll), and to redistribute their profits back into the community. They work with Samagra Sanitation in India to build community toilets in underserved areas, which is rad news, as we appear to be in the final season of Functioning Earth and looking for companies that give a damn.

Anyways. I’ll get to the bidet, but I wasn’t expecting to dig some of the accessories as much as I did; the toilet scrubber (for the bowl, not your ass) is highly aesthetic, and its biodegradable pads are made of lemon and tea-tree infused coconut husks.

Call me crazy but it kind of made me hungry? Like it looks something the coolest horse would eat in an American Girl Doll book. 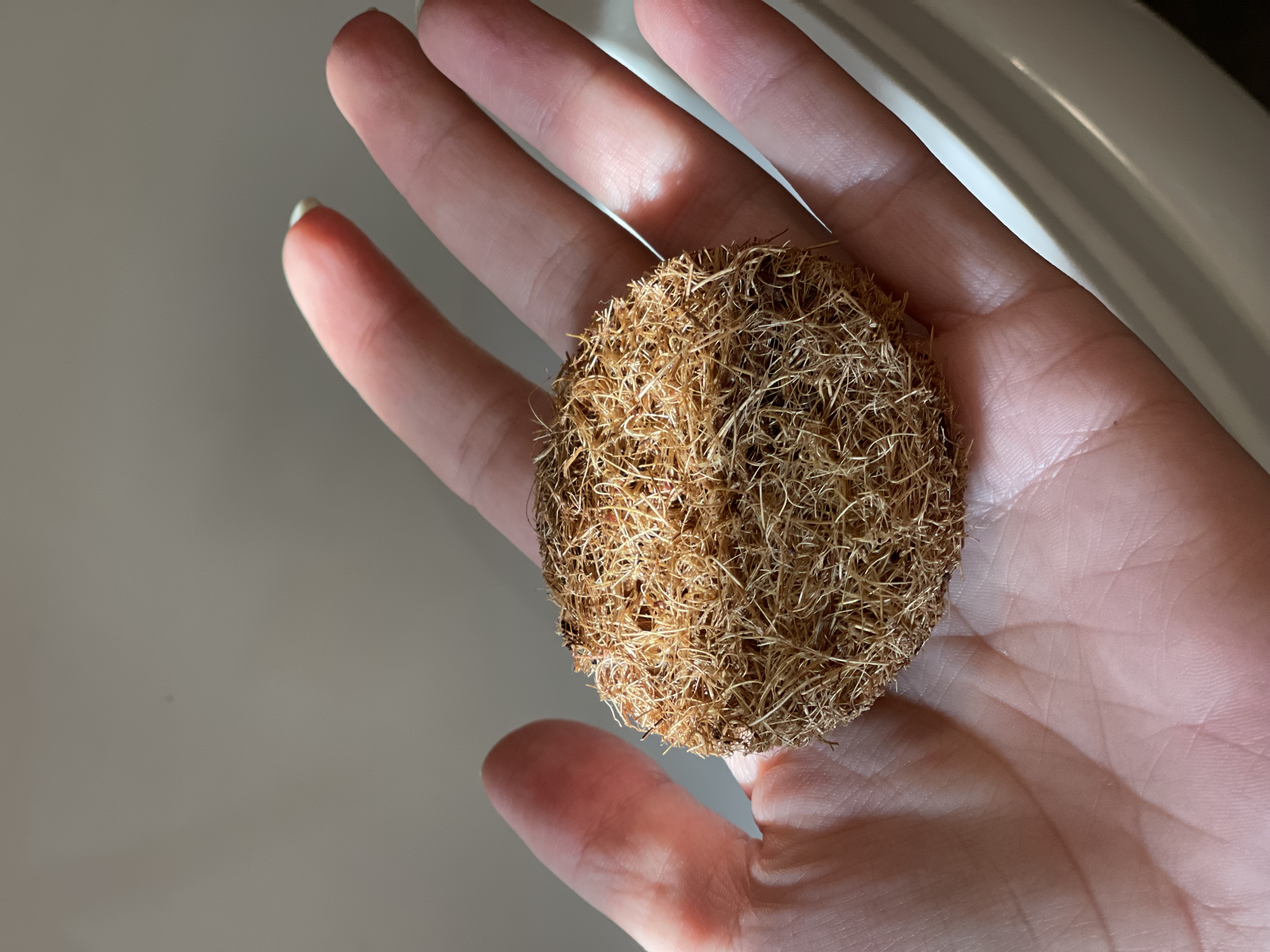 The toilet paper napkin dispenser situation kind of confused me. WTF is this? I thought, wondering if it was a stand for my phone, and why the toilet paper came out in little sheets. But remember, Tushy is trying to make us less shitty in every regard, and according to their team, our tradish, rolled toilet paper habits are “killing 15 million trees annually.” So, cool. We’re using squares now.

My one quandary with their toilet paper is that, given its brown coloring, you can’t really tell if you’ve gotten all your dingleberries. Maybe the next version can be dyed purple with beets or something? Either way, I dig the initiative and the fact that the stand can hold a fatty smartphone, bathroom book, or half of a hoagie. Do you.

Then there’s the ottoman, designed for deeper crouching and more elegant doo-doo-ing. Tushy has this video about all the benefits of assuming a crouching posture on the toilet, and it seems pretty legit. “As neuroscientist Daniel Lametti wrote in Slate in 2010,” explained NPR, “squatting allows the anorectal angle to straighten, so that less effort is required for evacuation.” The Journal of Clinical Gastroenterology also says “defecation postural modification” devices make for less strain on the toilet—so even before I installed my bidet, I gave this ottoman a whirl, and I have to say: Out of all the Tushy add-ons, this is the one gets its own Pixar movie. It made me feel like a big, spoiled baby in the best way, and it actually does make it easier to do a number two. Oddly, it reminded me of the first time I got glasses. Ohhhhh, I thought, so that’s what I’ve been missing.

Now [air horn] about the actual bidet. I received the Tushy Classic, which consists of three thingamajiggers: the bidet attachment, an adapter, and a hose (which you can also find on the Tushy Parts Page, which is kind of like their own mini hardware store). I procrastinated like hell to install it because I was so afraid of it, and actually had it sent to my parents’ house instead in the hopes they would do it with me (they didn’t).

“If you break my toilet, I’m kicking your ass,” my mother told me, in total fairness. I could not tell you what a Phillips head screwdriver is (a cocktail??). But props to Tushy, man. Their installation booklet and video tutorials were not only clear, but made me feel excited about getting indoctrinated into this hygienic cult from the future, in which everything is easy and everyone owns a NBD bidet.

I did end up needing a screwdriver to remove the toilet seat lid, but that was it. No wrench, no nothing. Do be warned: If you have a toilet with a rigid pipe/hose that connects your toilet to the water supply, you might need a different bidet. But installing the classic Tushy is lowkey (the Spa Bidet looks more intense) and definitely a good choice if you fear plumbing. 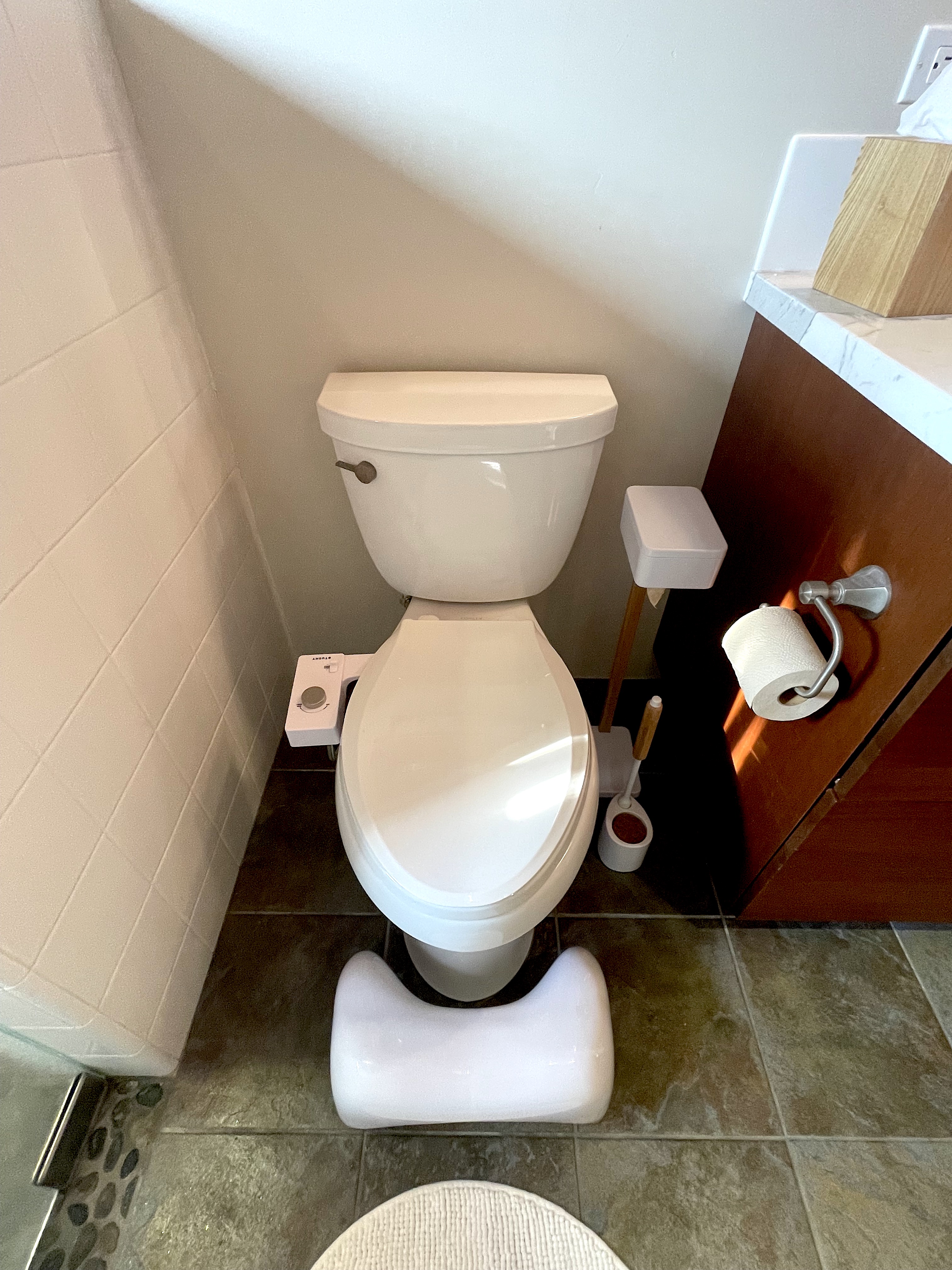 After 20-ish minutes, I emerged triumphant from my mother’s restroom like a douchey Bob the Builder. I texted three friends with the breaking news. “Lol. How does your mom like it?” my roommate responded. I explained her evolution from skepticism to fear; from confusion at seeing her most spaced-out daughter play plumber to the realization that nothing was broken. “The three stages of accepting change,” she said.

I squirted mommy dearest with the bidet when demonstrating the levels of intensity on the water (they range from trickle to jet-pack), but also, don’t stand in front of a bidet? (IDK, sorry, mom.) The Tushy attachment is pretty instinctive to use, as it’s basically a stylish little silver dial (you can also get bamboo, for your Japandi decor aspirations) that turns from “Off” to “Bum wash,” and features a sliding switch for changing the spray angle of the bidet’s… nozzle? I don’t know the proper name for the part that gently washes your rear, but it tends to your bum with a pleasant, room-temp stream of water and sits right under your toilet lid, far away from the depths of the bowl. 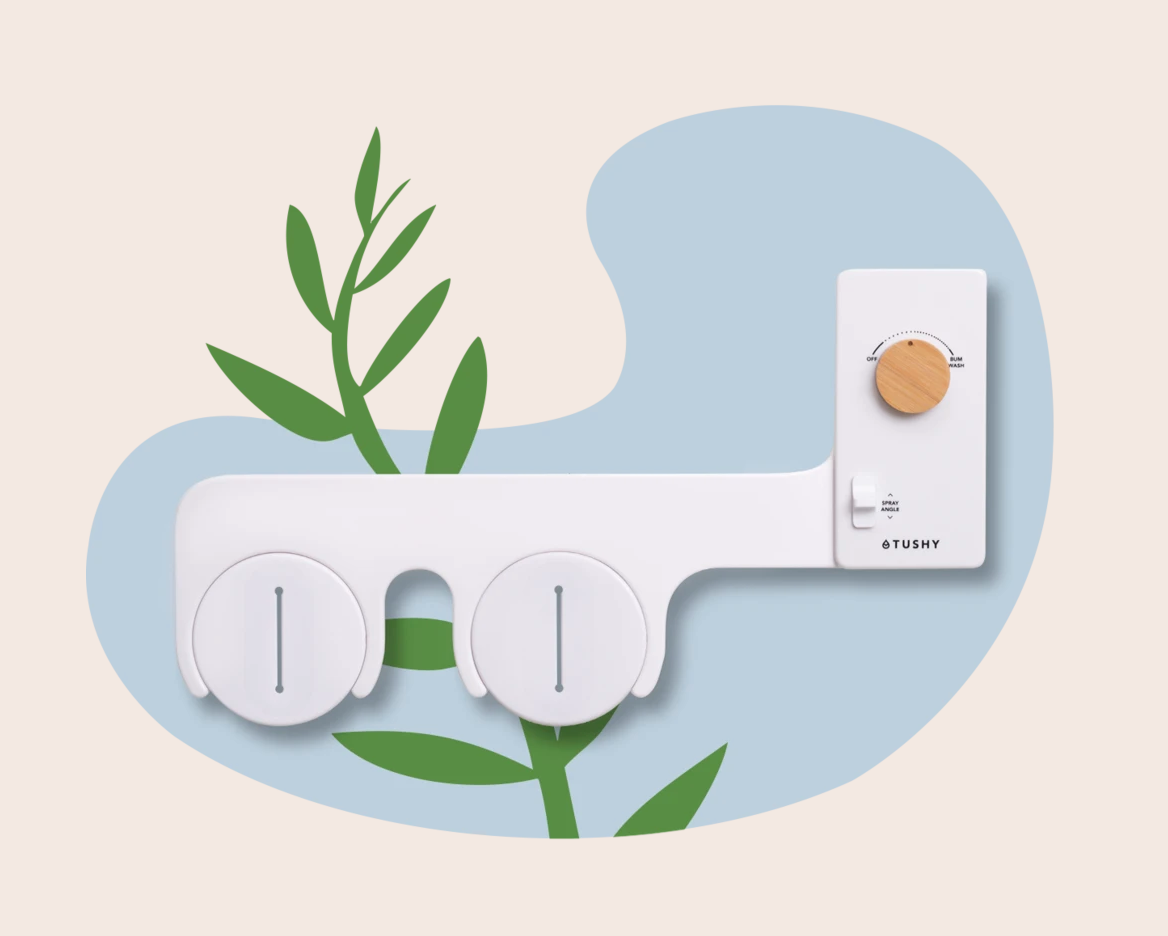 I might also mention that I’m vegetarian, except when there’s salmon chirashi around. My diet is mostly burritos, coffee, chickpeas, Flamin’ Hot Cheetos, and other movers and shakers of the bowels. I bidet, all day. And the Tushy was rad for me, in that respect. I think I said something like, “Sweet waters of Jordan—I’m a newborn baby dolphin” upon first post-poo use, because I’d forgotten how good it feels to step out of the restroom feeling that head-to-toe fresh. I’d forgotten the baptismal bliss of getting your butt mouth-washed clean of sin, and ready to face whatever ventures are on its horizon (this bejewelled plug, for example).

See, owning a bidet doesn’t make you better than anyone else—it just brings you closer to god.

The Rec Room staff independently selected all of the stuff featured in this story. Want more reviews, recommendations, and red-hot deals? Sign up for our newsletter.