This Mellow CBD Tincture Tastes Like Butter, and I’m Obsessed

I’m a hard chiller, but I’m also a lightweight. Which basically means that whenever I smoked a joint in my early 20s, I would just become paranoid and end up eating Bob’s Donuts out of the trash can in the kitchen (worth it) away from the party, bopping to Steely Dan and texting my mom to look busy. Which is cool. I figured cannabis just wasn’t my thing. And as a hot Tinder dude in sweatpants with no credit card (the term he used was “plastic jail,” I think) once told me, “Strains? CBD? Nahhh. Weed is weed, man, like wine is wine.”

Empirically, Sweatpants Brian was wrong: Different strains of cannabis have been observed to have different effects, and cabernet sauvignon drinks like coagulated blood next to a thin and refreshing pét-nat. But he also had a point. Our generation is fueling the cannabis industry to a projected global sum of $100 billion by 2026, according to the Chicago Tribune, and with that, it is also expanding the scope of conversation around ganja and its cousin, the hemp-derived compound cannabidiol, colloquially known as CBD.

These days, it seems like there is something on the funny green shelf that’s marketed for everyone—including lightweights like me. Hemp and cannabis both belong to the Cannabaceae fam, but hemp, by definition under federal law, contains less than 0.3 percent of delta-9 THC content by dry weight, according to the Agricultural Act of 2018 and other regulations. As such, hemp-derived CBD products can be a mellower option for those who can’t handle the brain spanking of an old-school joint. But understanding which CBD product works for you is a little trickier, and that’s where Sweatpants Brian made an inadvertent point. All of this [dumps carpet bag of CBD pillows, bath bombs, and hemp pre-rolls] is rad, but when will it feel a little less dizzying? A little more straightforward, especially for those of us who aren’t immersed in weed and/or CBD culture?

Standard Dose is the first retailer I’ve visited that made me feel like I found my people. The wellness site features heavily vetted CBD and plant-based products that are broken down into categories including “Purpose,” “Lifestyle,” “Skincare,” and “Supplements.” Their physical space in Manhattan feels like a free, bougie Taos retreat in which a whispering angel directs you to a floor pillow under ambient light, and gives you (again: freeeee) CBD tea. So, when the PR fairies sent a Standard Dose Tincture my way, I was skeptically optimistic. 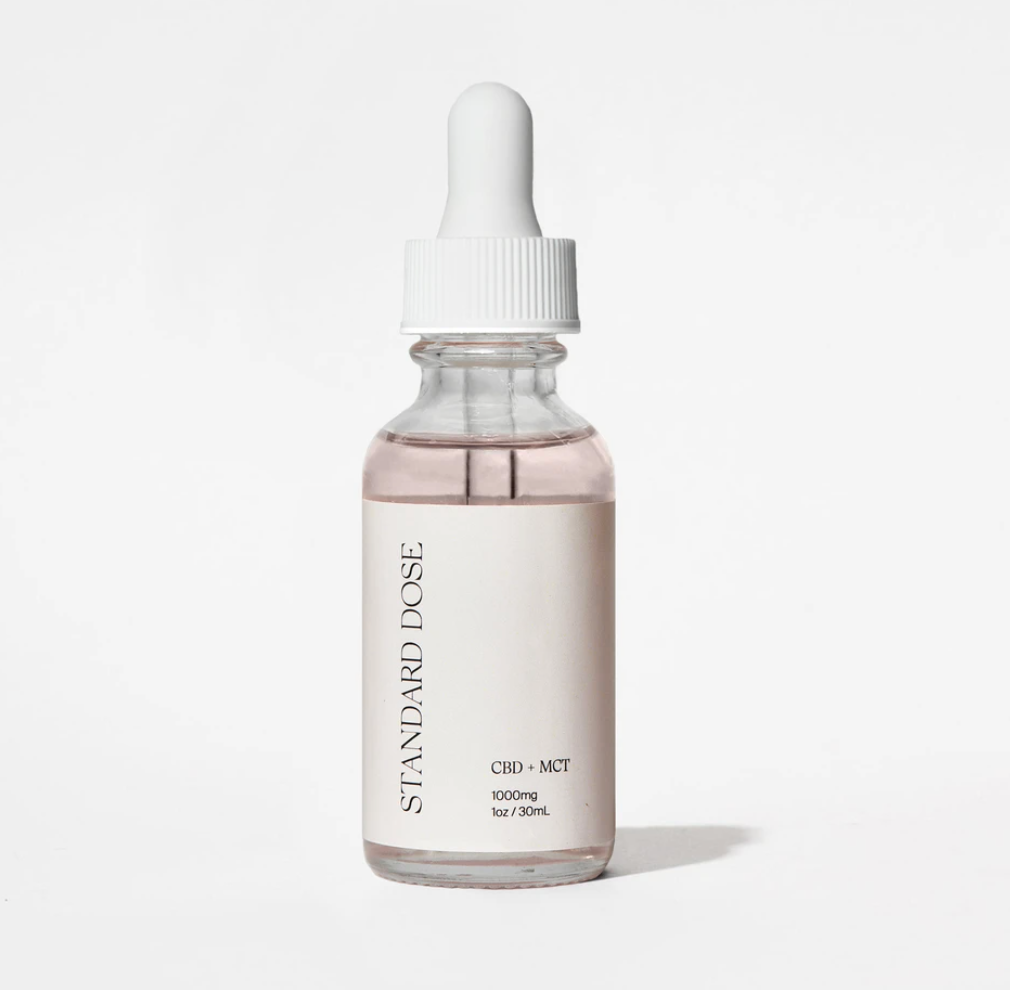 Now, to the FTC agent reading this: I will not be wearing my sequined WebMD hat today. I am not making any medical claims about how CBD tinctures will affect you, though I do hope we can share a doughnut someday—preferably while squirting Standard Dose's tincture into one another’s mouths, because first of all, it tastes like butter, dude. And I know that’s not how it’s marketed, and that this could fully be my own fried taste buds. But when I tried the Standard Dose tincture for the first time a few months ago, I was pleasantly surprised to have the subtle aftertaste of an unsalted butter from a sleepy town in southern France under my tongue. Subtly so, I should mention, which is cool, because I’m not a fan of flavored stuff—I would rather eat swamp ass than drink a blue Gatorade.

I was a little nervous to try a CBD product you drop under your tongue, because even some of the skin-contact, CBD-infused clothing (yes, that exists now) has sent me flying in the past. But this tincture was marketed as a “daily use” product, containing 1,000 milligrams of MCT oil and CBD isolate per bottle (locally sourced—cute) and a dropper that squirts a gentle 33 milligrams at a time. I had no idea what MCT oil was, but it is apparently what turns the liquid a shade of light pink over time, which is so adorable it’s kind of rude, and it’s simply a type of fat called “medium-chain triglycerides” that is easily digestible and made from coconut or palm kernel oil. Typically, people turn to it for weight loss and increased energy, though studies show mixed results on its effectiveness. Maybe it’s what makes the tincture taste like butter, so IDC. 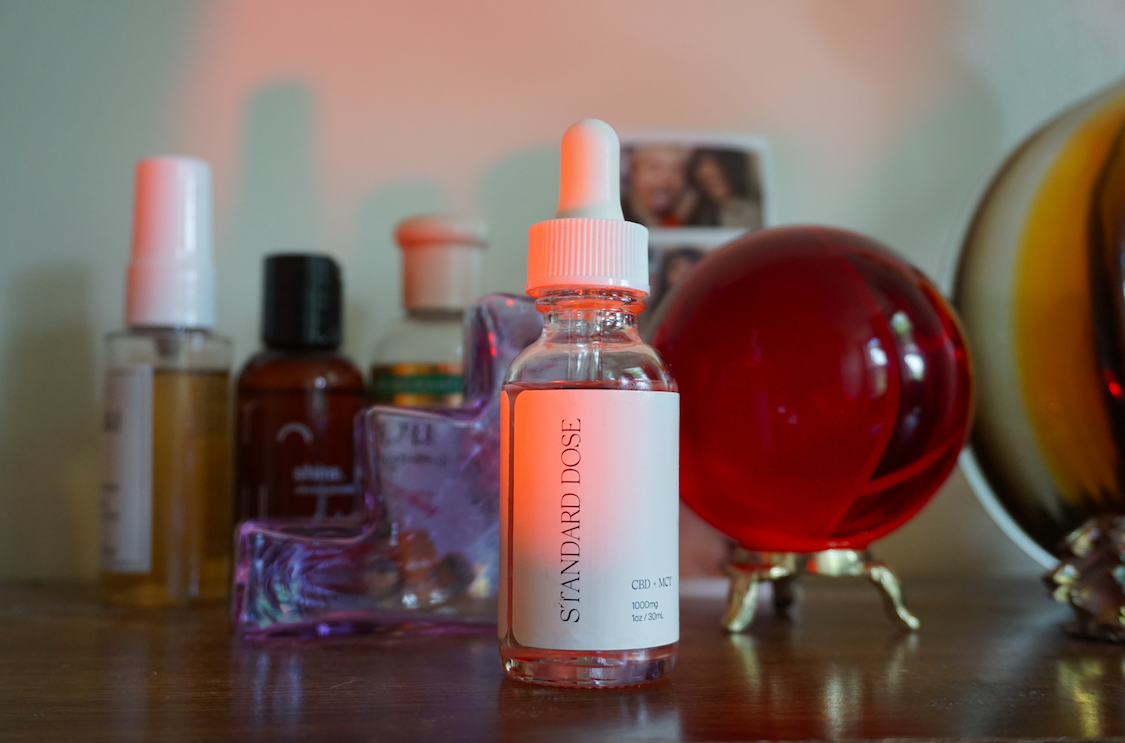 The moment I really noticed the difference, though, was when I took it in the morning on a Wednesday when I actually had stuff to do. Big stuff. Like, convince the IRS that my birthday was indeed the day that I said it was, and ask my parents why I had two birth certificates with two different names, when I was one person. Unlike rolling a CBD joint, or even slamming a CBD beverage, the quick squirt of a tincture takes less time and reflection—so when I splooshed that baby in my mouth, I kind of thought, “Damn, you idiot.”

I learned two things that day: I do not have a twin that I ate in the womb, and the Standard Dose tincture is so mellow that it should be rebranded “the workable tincture.” After about 15 minutes, it just felt like someone took away the gongs from the anxiety monkeys in my brain. I didn’t feel spaced out or hyper-connected to my doomscroll self in a way I think a lot of people who work from home do. I just… relaxed, slowed down, and cooled out. And I think that’s partially because of the low-key dosage, as well as the choice of a tincture product that will likely be more easily absorbed than a topical treatment. “You’re going to need to splash out to feel any real benefit from CBD,” reiterated Ryan Bassil after testing a bunch of CBD products, and “When you do, make sure it's on a tincture as this feels like the most effective way to be chilled out.”

Do I take this tincture every single day, twice a day? No. But that hasn’t decreased its effectiveness in body slamming the monkeys in my brain when I do. I keep it on my nightstand in that sexy little bottle, right by my lube and hair spray, and delight in wondering what shade of pink—and taste of butter–awaits me the next time I need it.

The Rec Room staff independently selected all of the stuff featured in this story.