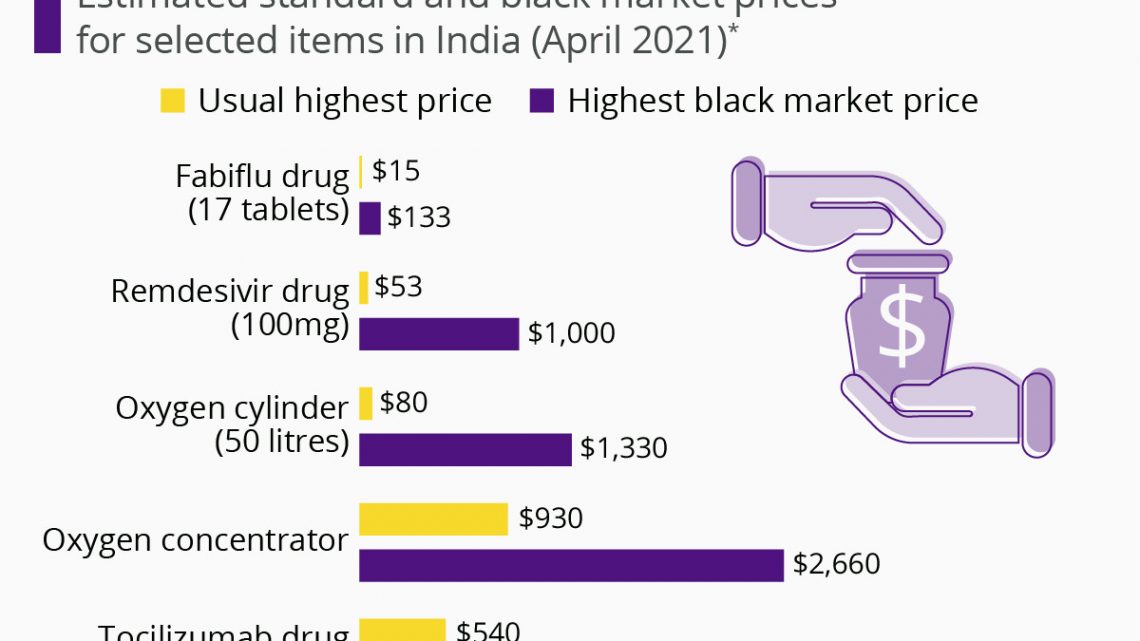 India’s Black Market for Oxygen Is Booming. Only the Ultra Rich Can Afford It.

For many in India, the ability to access oxygen and human-sized medical-grade oxygen cylinders is a matter of life or death – and a symbol of wealth.

India’s daily demand for medical grade oxygen is a staggering 2 million standard oxygen cylinders. This is the highest in the world, after India became the first country to register more than 400,000 new COVID-19 cases in a single day over the weekend.

According to a data tracker created by the non-profit organisation PATH, India’s daily demand is five times more than Brazil’s, which is around 388,000 cylinders.

This demand has fuelled a thriving unregulated black market that only the rich can afford and where vulnerable families are scammed. It has also led to Indians experimenting with making dangerous oxygen ventilators at home.

Pandey has helped dozens of COVID-19 patients find hospital beds, oxygen cylinders, concentrators, and medicines such as remdesivir and tocilizumab. Pandey said he was forced to consider black market supplies after multiple failed attempts at finding these resources at their original price.

“The saddest part is that the black market is all happening in the open, and hoarders are not scared to publicly share their numbers on social media,” Pandey told VICE World News.

“There are NGOs and official sources giving out these resources for free or at their original price, but they are usually exhausted within an hour,” he added.

While the Indian government maintains there isn’t an oxygen shortage in the country, hospitals say they are struggling to source oxygen. Dozens of patients have died in hospitals because of depleted oxygen supplies, and thousands of families are desperately seeking hospital beds with oxygen through social media.

India has reported more than 20 million coronavirus cases and more than 220,000 deaths. As the country’s daily cases continue their meteoric rise of more than 350,000 a day, experts stress that COVID-19 related deaths in India are largely due to a lack of oxygen beds and medications.

The average black market price of just one medical-grade oxygen cylinder - about $1,080 - is more than the average monthly income of the richest 1% in the country.

Multiple sources VICE World News spoke to who helped families of COVID-19 patients procure resources through the black market confirmed that prices had risen to exorbitant amounts, and medicines that usually cost Rs 5,000 ($67) over-the-counter are being sold on the black market for Rs 60,000 ($811). 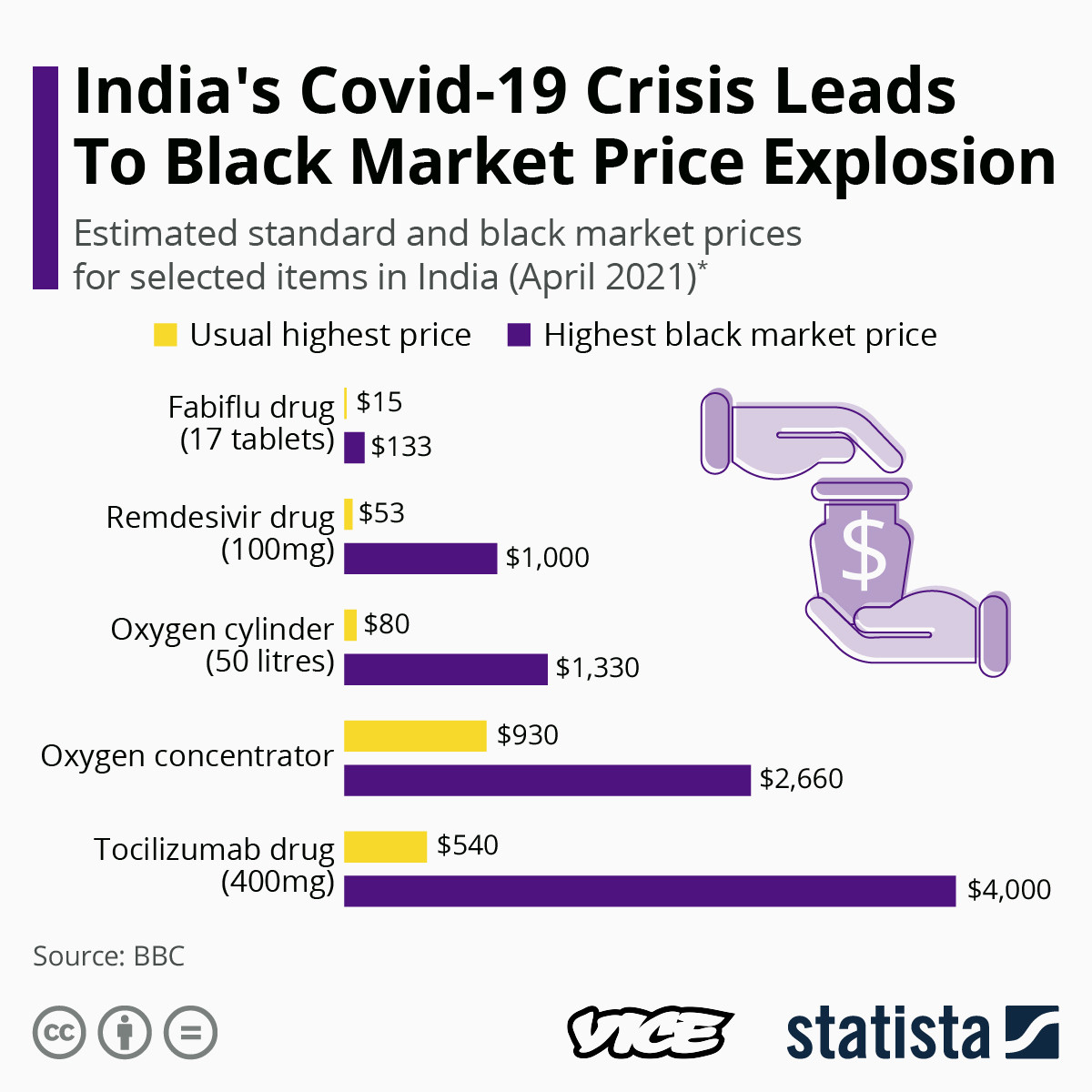 VICE World News reached out to multiple black market suppliers, who either did not respond, or stopped responding when asked about why their prices were so high.

“It’s a simple matter of supply and demand: there is too much demand, and not enough supply, so we are forced to sell oxygen concentrators, which are not locally made, for ten times their price,” a Delhi-based black market supplier told VICE World News on the condition of anonymity. According to the supplier, cylinders are almost impossible to come across, while concentrators have to be shipped in from Singapore or Germany, which he believes justifies the hiked price. 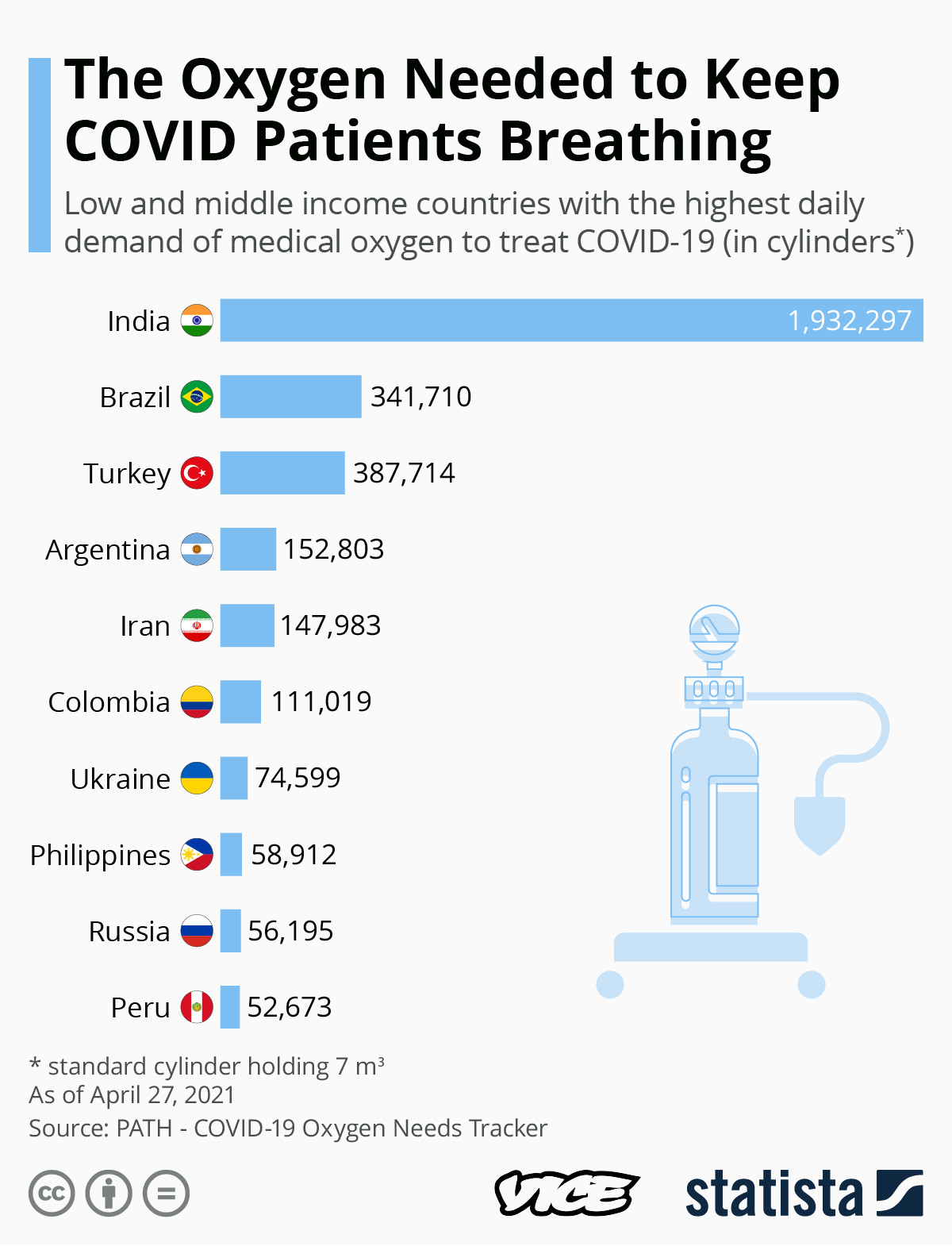 In states like Uttar Pradesh, the government continues to deny that there is a shortage of oxygen, and has launched live-monitoring systems to track how much oxygen hospitals have. According to data submitted by the Indian government to the Supreme Court, India had three times more medical oxygen than its demand in 12 states, with around 16,000 metric tons of liquid oxygen to meet a cumulative demand estimated to be 4,880 metric tons as of last week.

However, activists point out that these systems only track hospital resources, and not those required by COVID-19 patients in home isolation.

“There are multiple patients who either don’t get a hospital bed or are discharged early because of the number of cases that need medical attention, and these are the people who put out SOS alerts,” Saket Gokhale, a journalist and activist told VICE World News.

According to Gokhale, who regularly uses India’s Right to Information (RTI) act to gather data, there is no centralised data system that is making concrete records of how many metric tonnes of oxygen are being used in India. “Article 21 of the constitution of India guarantees the right to life, so [denying someone] oxygen is on the verge of culpable homicide. But the lack of a scheme with respect to getting oxygen ventilators for patients isolating at home has pushed them to follow whatever leads are available.”

While Prime Minister Narendra Modi’s office announced that the country’s oxygen production has increased by 60 percent to meet the crisis, volunteers and oxygen suppliers point out that logistical issues could prevent the oxygen from reaching people who need it.

“We do not have enough cryogenic trucks to carry the oxygen, and then there are cases such as a tanker getting stopped while going from Gurgaon in Haryana to Delhi, where there is a high demand,” Aparna Jain, an author who is now leading a volunteer network to help underprivileged members of society access essential resources told VICE World News. Haryana is the state bordering Delhi. 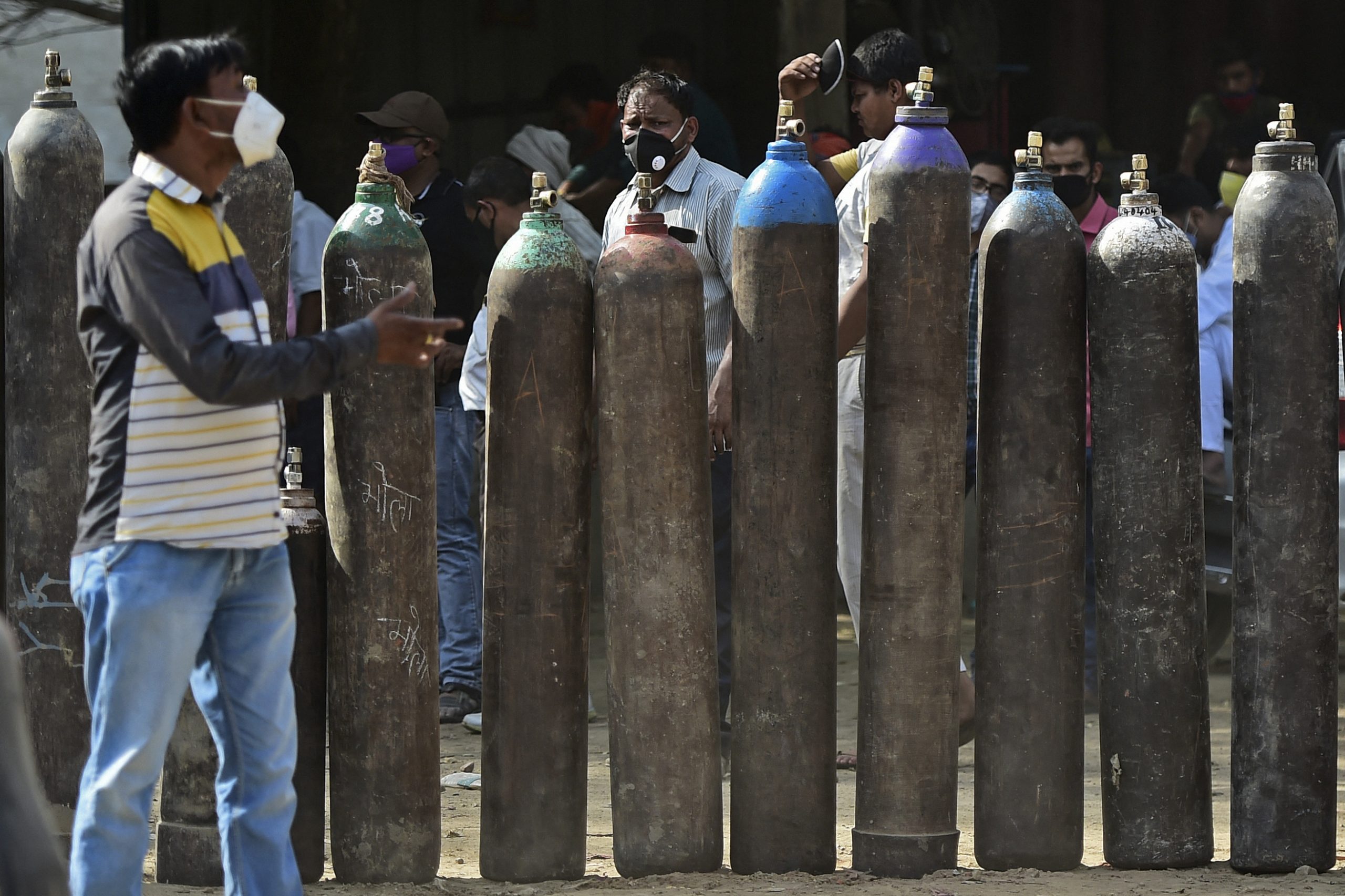 People wait to refill their medical oxygen cylinders for Covid-19 coronavirus patients at an oxygen refilling station in Allahabad on April 24, 2021. Photo by Sanjay KANOJIA / AFP

The crippling shortage of oxygen has also pushed many Indians to desperately experiment with making oxygen ventilators at home.

Last week, YouTubers went viral for videos that showed people how to make oxygen using easily available resources at home. Many of them were high school students. “We have made oxygen in our labs before using the process of electrolysis, and easily available chemicals like potassium permanganate and hydrogen peroxide,” Kirtharth Tiwari, a 16-year-old from Uttar Pradesh whose YouTube video got more than 50,000 views told VICE World News. Tiwari then made a follow-up video showing people how to purify the oxygen for medical use, and avoid the risk of an exothermic reaction by using ice packs.

“Two people reached out to me and said watching my video and following the instructions worked for their family members, some who had COVID-19,” Rahul Soni, another YouTuber who had got more than 300,000 views on his video told VICE World News.

However, experts have warned against doing such experiments at home since they could lead to dangerous explosions. YouTube took both videos down for violating community guidelines.

Last week, the Delhi High Court ordered the state government in India’s national capital to crack down on the illegal sale of life-saving COVID-19 resources. But even as the police have arrested several black market suppliers in Delhi, the underground racket continues.

Experts argue that this massive shortage could have been avoided with better planning and management systems. While Gokhale agreed that this would not solve the overall oxygen shortage – which the government largely denies – he said the government should appoint specific distributors and announce a list of trusted sources at the very least.

“We have registered dealers and dispensing outlets for LPG cylinders in India, so why has the same system and licensing not been done to create dedicated points of sale for oxygen?”

Epic Games Takes Apple On In Court: Who Will Win and Who Should Win?
Yellen Spooks Markets With Fed-Like Comments “Rates May Have to Rise Somewhat”