An Honest Review of MUD\WTR, the Viral Coffee Alternative That Looks Like, Uh, Mud

Before we get started, let it be known that although it’s pronounced mud water, it’s spelled MUD\WTR. Not since “Get It Going,” a tea made to help alleviate constipation, has there been a more appropriately titled product. As a coffee alternative, it has a grainy look that lies somewhere between ground beans and soil, and, if not mixed appropriately, the consistency of mud.

Now before I dive into the thing—the mud water… er, MUD\WTR that is—let me give you a brief overview. I love coffee. I’ve always loved drinking coffee. It’s what got me through college, and those late nights of pretending to do homework or study when in actuality I was brewing more coffee. Although coffee helped me survive some dark times (often literally dark times, because I foolishly decided to get jacked on caffeine after 6 PM), there was a point where I had to say enough was enough—partially because I drank too much of it, but mainly because I realized that coffee wasn't really waking me up; instead, it was increasing my anxiety to the point where it felt like someone had tied my innards into a knot. Impressive, I know. Painful, quite. This feeling, I've been told, is not the sort of thing most people should expect after a single grande latte. But for those of us who are caffeine-sensitive, coffee can have some seriously negative side effects, especially if you suffer from anxiety.

Saying goodbye to coffee never seemed like an option to me until it was suddenly a necessity. But I quickly realized that one of the hardest parts of giving it up was losing the ritualistic aspect. What’s the point of a late night if you couldn’t look forward to a good latte the following morning? What's the point of a morning at all without a designated wake-me-up beverage? These existential questions kept me up until the wee hours, which made stimulant-free mornings even more difficult.

Decaf coffee’s alright, but I will occasionally relapse, have a cup of coffee, and immediately regret it. But my daily routine needed something to fill that great big coffee-less void in the morning and in my life. So I started researching the best coffee alternatives, which is how I learned about MUD\WTR, a super popular chai-like powder created by Shane Heath, an artist and former Silicon Valley designer. It's all over Instagram and Google Ads, nutritionists endorse it, and it purports to offer numerous health benefits—so I decided to drink some of that mud and see what it was all about.

So, what’s all this mud, anyway? 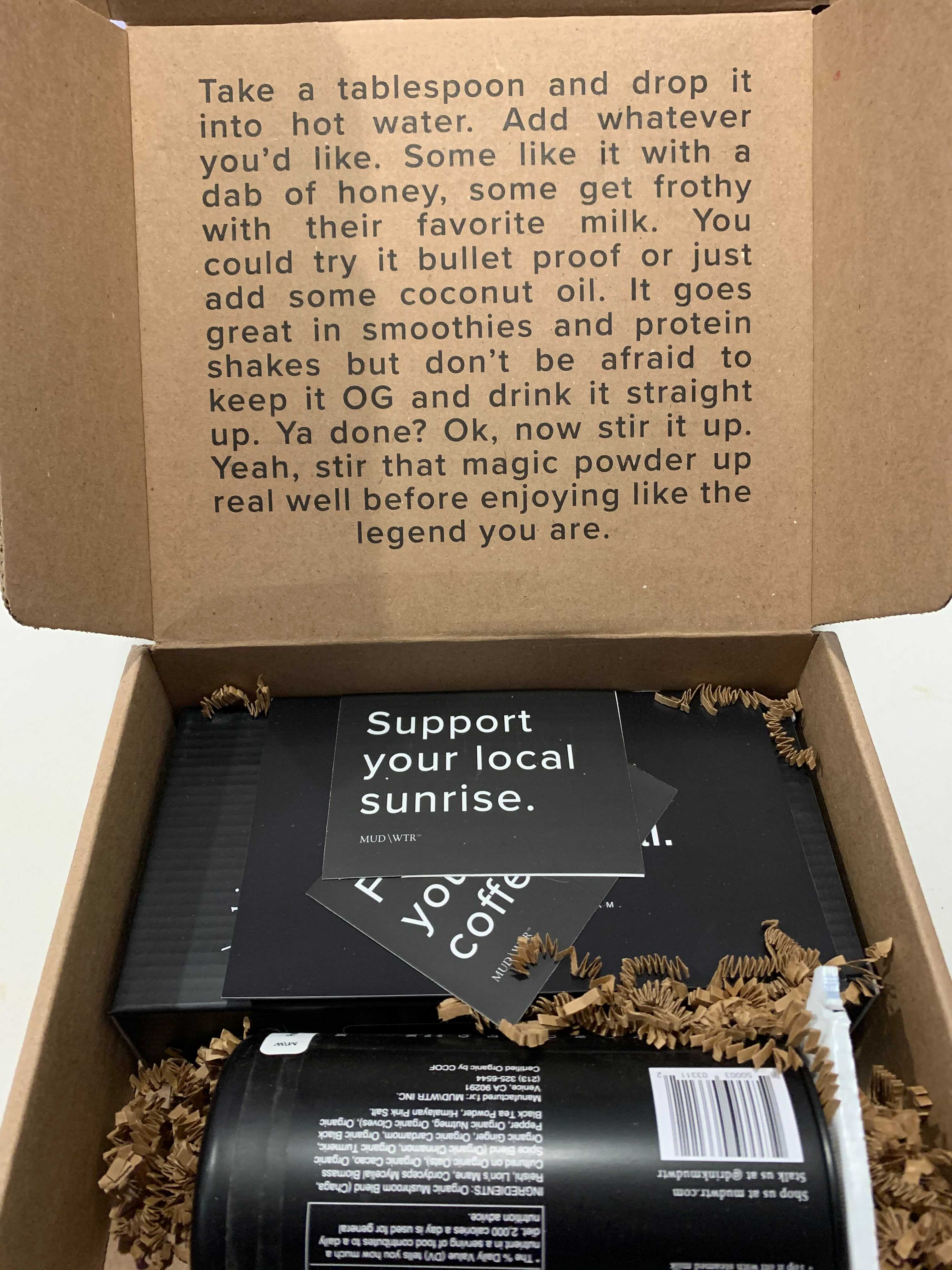 MUD\WTR brands itself as a coffee alternative, with each serving containing one-seventh the amount of caffeine as a cup of joe, claiming to offer an energy boost without the jitters. It is a light brown powder that looks fairly similar to ground ginger, and like many of the newer coffee substitutes, it starts with a sort of chai-cocoa base (black tea, cardamom, nutmeg, cloves, ginger, black pepper, cinnamon, cacao, turmeric) and includes a blend of mushrooms (lion’s mane, cordyceps, chaga, reishi) with supposedly healthful, adaptogenic properties.

MUD\WTR is meant to be consumed every day, just like coffee; the company even offers a monthly, 30-serving subscription service. My first package arrived in a nice brown box with some interesting flourishes, such as a sticker that says “f*ck your coffee,” which I felt was a bit harsh, and “support your local sunrise” which, while lighter in tone, I’d like to opt-out of, thank you very much. Sunrises are nice and all, but really, dawn is just a glorified dusk doing a reverse swan dive out of the Atlantic.

The packaging also includes a free electronic frother called the Mud Whip (or "\whip" as it’s referred to on the box), as well as a sample of the brand's coconut creamer (in this case, known as ":creamer") which comes in the form of a white powder that looks like a combination of powdered sugar and flour, and smells, well, less appetizing than a combination of powdered sugar and flour.

The primary serving suggestion is a "mud latte," which I'm convinced should be called a MUD\LTE, and which is merely a combination of one tablespoon of MUD\WTR and six grams of ":creamer." (However, there are numerous considerably more appetizing MUD\WTR recipes available on the brand’s site, from smoothies to nog to cake.) The fact that the creamer (sorry, ":creamer") is measured in grams makes me wonder if maybe there’s more to this creamer than meets the eye… When I asked Siri how I can translate grams into teaspoons, Siri said that they weren’t compatible, which, incidentally, is exactly how I’d describe my relationship with Siri. Google told me that roughly one teaspoon was 4.2 grams, which meant I could use my little half teaspoon three times to get a measurement that felt close enough. Math in the morning usually does not set me up for success.

On its website, MUD\WTR suggests to “stir well,” which is sort of an understatement. This is where the MUD Whip (\whip) comes in, for a little encouragement. If you don’t stir it properly into your hot water, you'll find that there will be a thick layer of sludgy mud at the bottom of your cup. 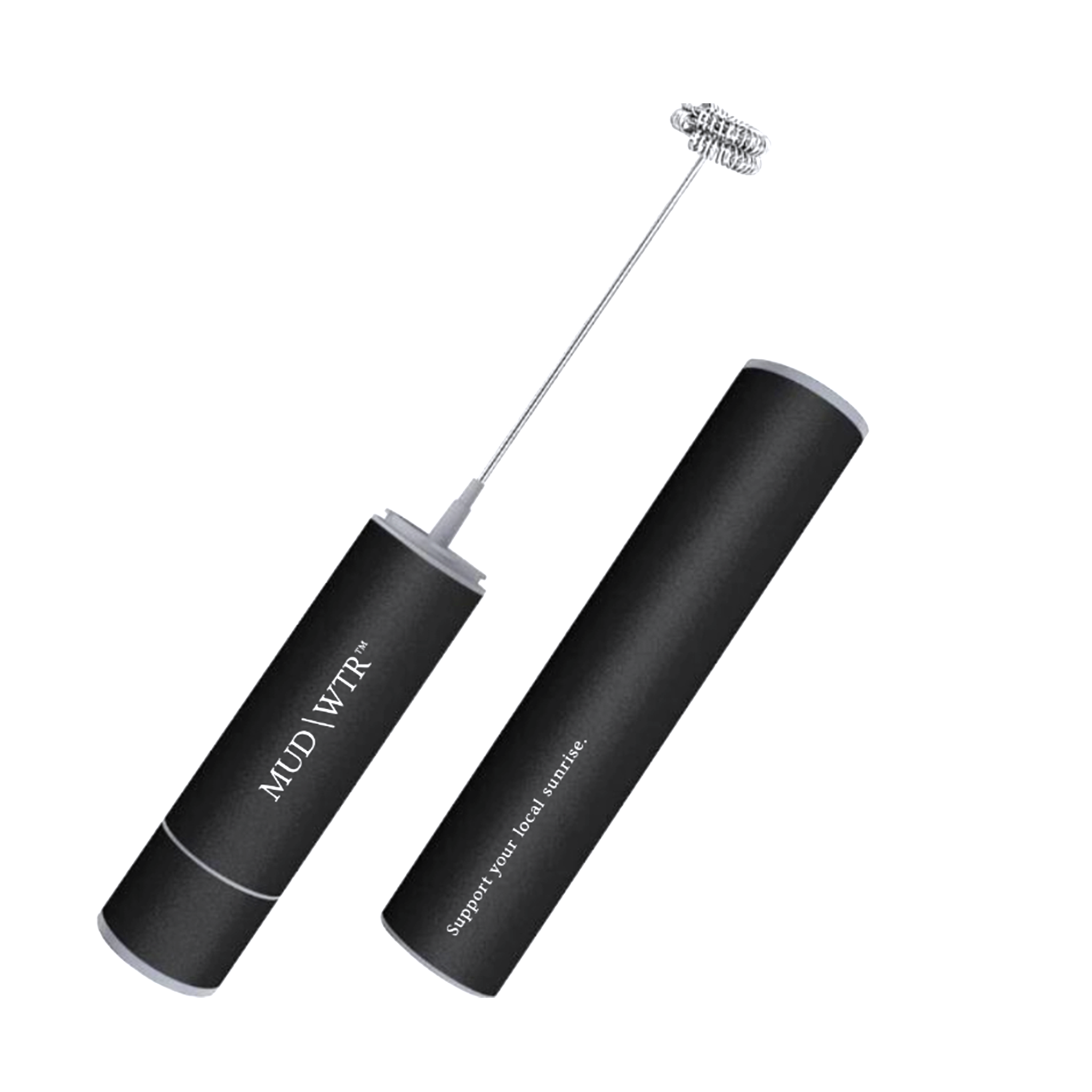 When making my first batch of MUD\WTR, I made the mistake of sticking the MUD Whip (\whip) straight into boiling liquid. Which would have been fine, if the thing didn’t happen to be on at the time, sending hot water and mud spraying all over every nearby surface. An explosion of boiling sludge will successfully wake you up in the morning. To be fair, MUD\WTR does have a pamphlet that describes how to properly use the \whip, so I suggest reading that, since I didn't.

After adding in all the ingredients, mixing it, measuring the coconut milk and MCT oil (aka the :creamer), and adding some steamed oat milk from my Nesspresso frother, I tried the mud for the first time.

MUD\WTR has a very distinct taste. It’s a chai-cocoa combo that tastes like a cinnamon-rich mocha, with a hint of ginger and a very earthy aftertaste. Of course, the flavor is contingent on how you make your brew. Personally, I am not someone who adds sugar to things, preferring a more natural flavor that isn’t overloaded with sweetness, which is why I like MUD\WTR because it's almost like drinking actual mud. Again, very accurate title.

During one tasting session, I did add some honey to give this whole sweet thing a try, but I didn't find that it added much. Realistically, if you don’t like earthy flavors, then MUD\WTR might not be for you. Like coffee, it's something of an acquired taste and for me, one I really happen to enjoy.

More importantly, the little tap (rather than a kick) of energy that it provides is much more smooth and manageable than that of coffee. There’s not a "high" like the surge you might get from coffee or espresso, but there’s a steady, low-grade buzz that feels on par with a cup of black tea. I actually found the caffeine to be the perfect amount for both getting started in the morning and providing a pick-me-up in the afternoon. 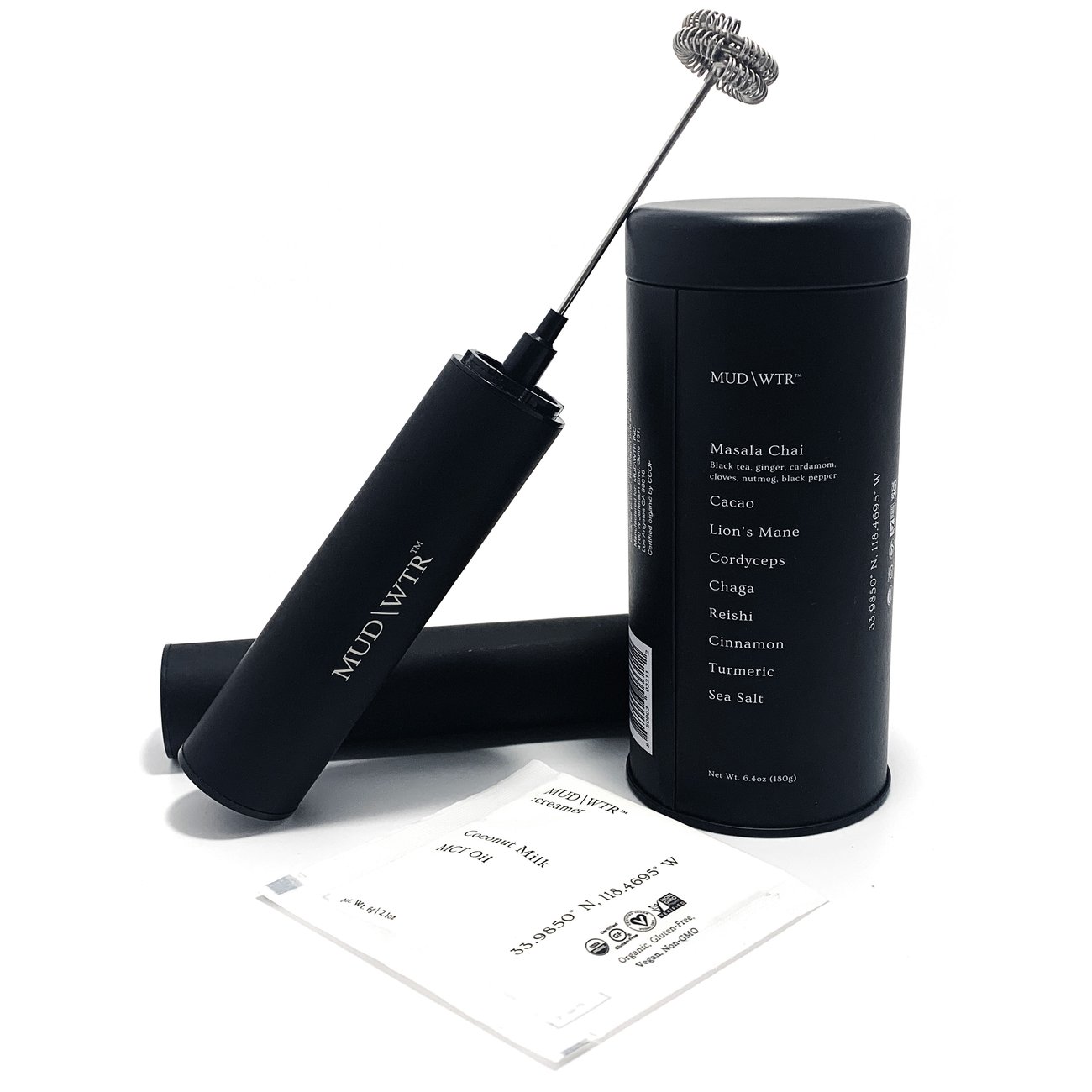 I'm gonna be honest: At first, I was not all too impressed with MUD\WTR, starting with the "creative" way the brand decided to title its products. I’m all for new things, but when new things involve me having to figure out where the backward slash key is on my computer, that’s where I put my foot down. Then, of course, there was the literal mud-slinging incident involving the \whip. It initially felt like a lot of work to make this stuff, although, lest we forget, making coffee involves drying and grinding beans that you then have to steep and strain and yada yada yada. But! After getting into the flow of making MUD\WTR, and after finding out my preferences, I enjoyed it–especially since one-seventh the caffeine of coffee is apparently my sweet spot for morning energy-beverage consumption.

Despite the excessive punctuation, at least the name is honest. And there’s nothing wrong with mud, anyway.

The mud, the \whip, :creamer, and all that are available for purchase at MUD\WTR.

The Rec Room staff independently selected all of the stuff featured in this story. VICE may receive a small commission if you buy through the links on our site.