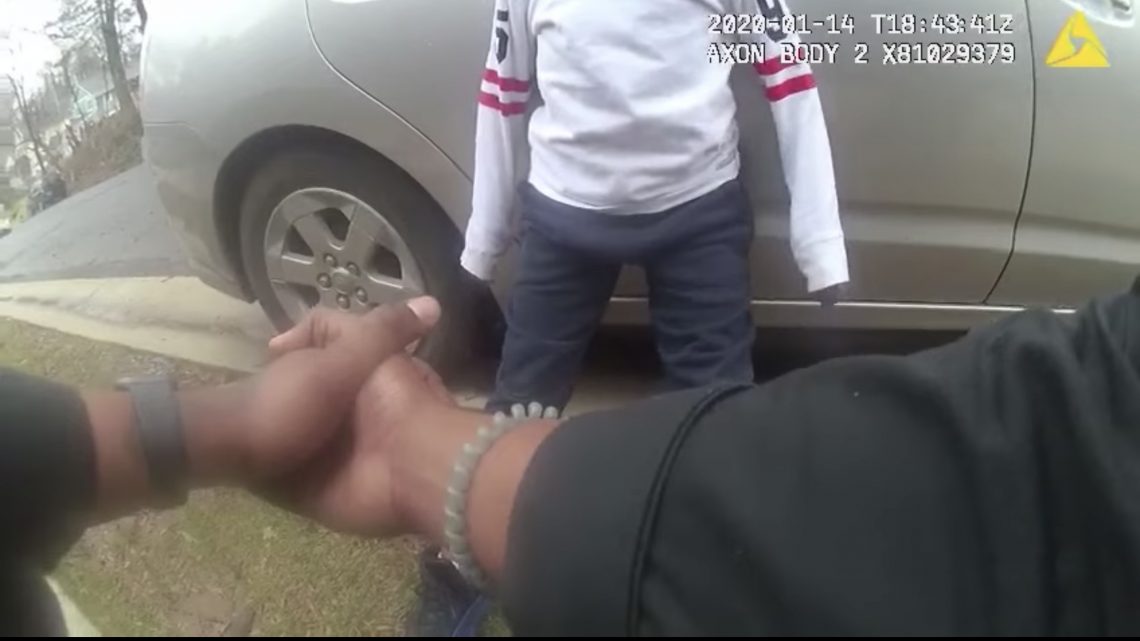 The 5-year-old boy surrounded by two Maryland police officers was hysterical—screaming and crying so hard in his school principal’s office that he was having trouble catching his breath. Then one of the cops leaned down, got in his face, and screamed at the top of her lungs, according to newly released body camera footage.

“When you get older, when you want to make your own decisions, you know what’s going to be your best friend?” another officer later told the child while holding up a pair of handcuffs, the footage shows. “These right here.”

The officer then put a handcuff around the boy’s tiny wrist.

An employee at the East Silver Spring Elementary School had apparently called the Montgomery County Department of Police for help on July 14, 2020 after the kindergartner walked off the premises of his elementary school and “did not wish to return,” police said.

But the two officers who responded and located the boy later encouraged the child's mother to beat him and informed him he was “bad.”

The disturbing interaction between police and the young child, which has since elicited horrified reactions from some community members, was first detailed in a lawsuit filed by the boy’s mother earlier this year. The Montgomery County Department of Police then made the body camera footage public until Friday.

“To not know how to talk with and treat a little kid—a 5-year-old that you encounter who is obviously having a bad day—and treat him like he just committed a distribution of narcotics with a firearm, there’s just no excuse for that,” said James Papirmeister, one of the attorneys representing the boy’s mother, Shanta Grant, said.

Matthew Bennett, another attorney for the mother, added in an interview with VICE News, “I just can’t get my head around it. I don’t understand why he would tell him that handcuffs would be his best friend.”

Grant is seeking compensation and county-wide training for officers, the attorneys said.

The Montgomery County Department of Police said in a statement posted to the agency’s website that “the department has no further comment” on the incident due to pending litigation. An internal investigation has already concluded, police noted.

The officers, named in the lawsuit as Officers Dionne Holliday and Kevin Christmon, remain employed by the police department.

But since the video’s release, at least one local official has said they should lose their jobs.

County Councilmember Will Jawando said the video, which he had previously requested access to, made him sick. He said he wanted the officers fired in a response he posted to Twitter—which included a trigger warning.

“Before our eyes, we watched a little boy be failed by every adult whose one purpose was to help him,” Jawando said in a statement.

In a joint statement, Montgomery County Public Schools Superintendent Jack Smith and Board of Education President Brenda Wolff also said, “There is no excuse for adults to ever speak to or threaten a child in this way.”

Still, it’s just the latest example of police escalating an interaction involving a young child. Cops in Colorado were accused of handcuffing and arresting a crying 11-year-old, for example, after he poked a fellow student with a pencil. And earlier this year, Rochester, New York police were also seen on video pepper-spraying a 9-year-old girl.

In the 5-year-old’s case, Officer Christmon quickly lost patience after encountering the boy, according to the lawsuit brought by Grant. The boy, who appeared quiet at the start of the body camera footage released Friday, started crying after he was loaded in a police car despite his school being within walking distance.

Once the officers, the child, and a school official all arrived back at the school, body camera video shows that Officer Holliday remarked, “That’s why people need to beat their kids.”

The child was told to sit down in a school office. Officers remained on scene, despite there being no legitimate purpose for them to stay there, according to the lawsuit. Once he was picked up by Officer Christmon and placed in the chair, the child started screaming. And Holliday screamed back, offering five “primal screams with the seeming purpose of terrorizing an already traumatized and upset child,” attorneys wrote in the lawsuit.

The school official did not step in, but later called Grant and tried to get him to talk to her on the phone. Christmon forced him into the chair as Grant reassured the boy, “Mommy coming, OK?” The child was sobbing so hard that he was coughing.

Then, once Grant arrived, she reassured the officers that she did not beat her child, who at that point had quieted down. They responded that she should.

“We want you to beat him,” Holliday can be heard saying.

Holliday did not immediately respond to VICE News’ request for comment, while a phone number for Christmon wasn’t immediately available.