What We Know So Far About the Colorado Supermarket Mass Shooting

UPDATE, 11:00PM (EST), 22/03/21: The article was updated to include the name of the police officer who was fatally shot at the King Soopers supermarket.

UPDATE, 10:35PM (EST), 22/03/21: The article was updated to confirm that at least 10 people were killed in the King Soopers supermarket shooting, including a police officer who was fatally shot.

Multiple fatalities have been confirmed and one suspect has been arrested following a shooting at a grocery store in Boulder, Colorado.

Boulder Police tweeted at 2:49PM that there was an active shooter at the King Soopers supermarket on Table Mesa Drive, in the southern part of the city, and urged people to “AVOID THE AREA”. It has since been confirmed that at least 10 people were killed, including a police officer who was fatally shot.

It is the seventh mass shooting in the United States in the past seven days.

“We had a very tragic incident today here at the King Soopers. There was loss of life. We have multiple people who were killed in this incident, and I’m sorry to have to report that one of them was a Boulder Police officer,” Commander Kerry Yamaguchi from Boulder Police Department told the media just before 7PM on Tuesday night. “There is no ongoing public threat. We do have a person of interest in custody. That person was injured during the incident, and is being treated for the injuries.” 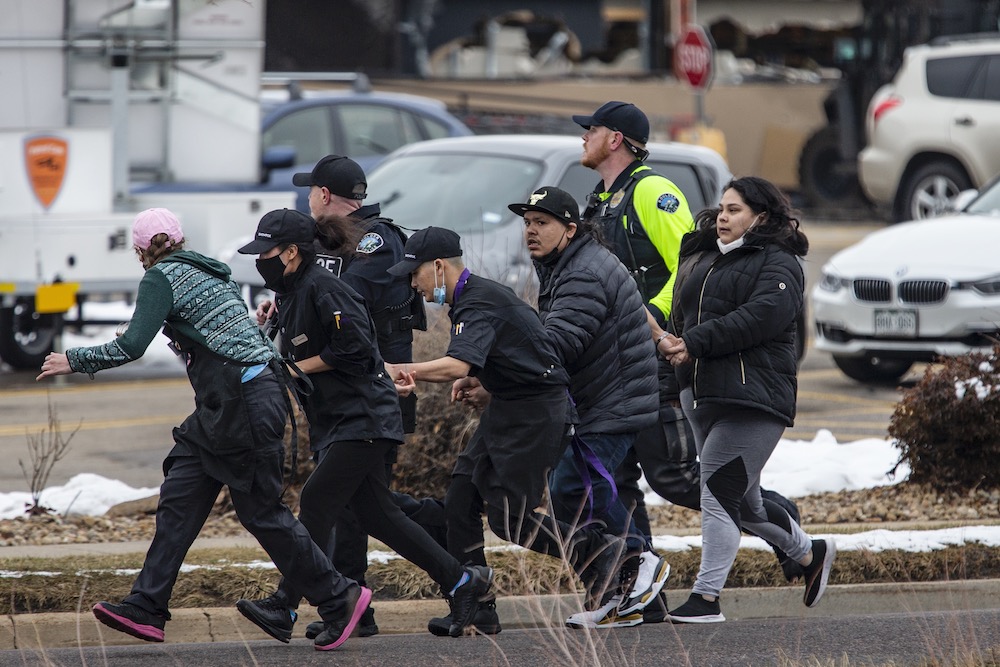 Shoppers are evacuated from a King Soopers grocery store after a gunman opened fire. All images by Chet Strange​ / Getty

The police officer who was fatally shot was later identified as 51-year-old Eric Talley, who was the first officer to respond at the scene. He was a father to seven children, the eldest of whom is 20, and served with the Boulder Police Department since 2010.

“I have to tell you the heroic action of this officer when he responded to the scene,” Boulder Police Chief Maris Herold said at a news conference on Monday night. “At 1430 hours, the Border Police Department began receiving phone calls of shots fired in the area. A phone call about a possible person with a patrol rifle. Officer Talley responded to the scene, was first on the scene, and he was fatally shot.”

Officers were initially called to the King Soopers following reports of a man who was shot in his vehicle, and were fired upon as they arrived, police told KDVR-TV. Law enforcement vehicles surrounded the store and authorities announced over a loudspeaker that “you need to surrender,” demanding that the suspect come out with hands up and unarmed.

“Officers were here within minutes of the initial 911 call and entered the building very quickly,” Commander Yamaguchi said. When asked about injuries in addition to those who were killed, he said “At this point the only injured party we are aware of, with a significant injury, was the suspect. We know of no other serious injuries at this point.”

Video footage from the scene, captured by a KMGH news helicopter, showed a shirtless and shoeless man in handcuffs with a bloodied leg being escorted away by police.

At 4:18PM Boulder Police tweeted that the site of the shooting was “still a very active scene” and asked people not to broadcast tactical information on social media.

At 5:10PM, they issued an emergency notification asking people near 17th and Grove, about three miles north of the King Soopers on Table Mesa, to shelter in place while they responded to reports of an “armed, dangerous individual,” and said they were trying to determine whether that was related to the King Soopers shooting. It is now believed to be unrelated.

Witnesses reported hearing shots and seeing a man dressed in tactical gear while brandishing an “AR-15 style weapon.” This was not confirmed by police. 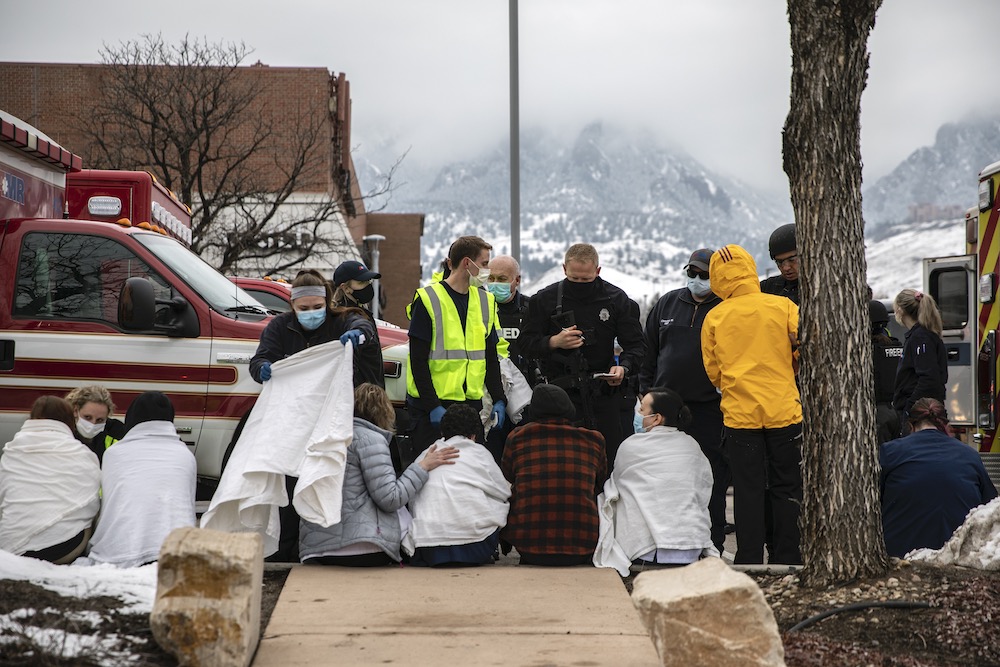 Healthcare workers and shoppers are tended to after being evacuated from a grocery store. All images by Chet Strange​ / Getty

Video captured by eyewitness Dean Schiller, who live streamed as the shooting progressed and police arrived, showed people lying on the ground inside and outside the store while purported gunshots could be heard in the background.

A pair of roommates who live near the King Soopers told The Denver Post they were at the store buying a pizza for lunch when a gunman entered the store.

“He didn’t say shit,” said one of the men. “He just came in and started shooting.” The other witness said the gunman “let off a couple of shots, then was silent, and then he let off a couple more. He wasn’t spraying.” Both men managed to escape.

Another witness told The Denver Post he escaped via the loading dock, and saw groups of young people similarly helping older shoppers off the dock. “It seemed like all of us had imagined we’d be in a situation like this at some point in our lives,” he said.

Multiple authorities and media commentators have compared the incident to the Columbine High School shooting massacre of 1999, as well as the Aurora mass shooting of 2012—both of which took place less than 30 miles from the King Soopers on Table Mesa.

Ryan Borowski, who was inside the store when gunshots erupted, told CNN that some people fled the scene while others froze. "We ran and I don't know why other people didn't and I am sorry that they froze,” he said. 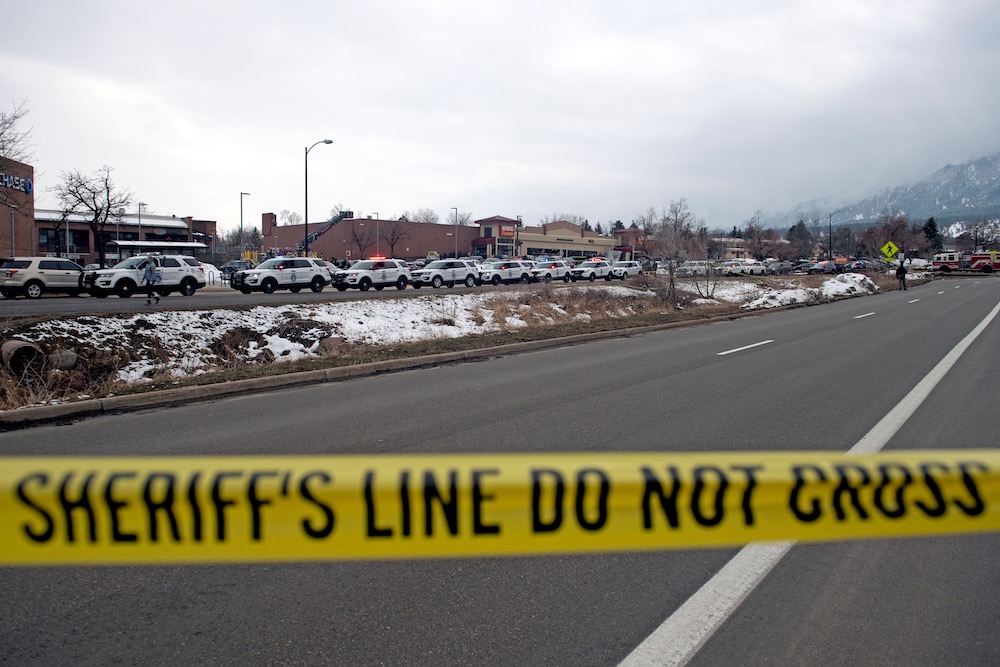 Crime scene tape closes off access to the King Soopers grocery store in Boulder. All images by Chet Strange​ / Getty

"Boulder feels like a bubble and the bubble burst and that's heartbreaking. To think that people died today. This feels like the safest spot in America and I just nearly got killed for getting a soda, you know, and a bag of chips. Doesn't feel good."

Michael Dougherty, the district attorney for Boulder County, called the shooting "a tragedy and a nightmare,” and suggested that the exact details were still being confirmed and would be revealed in the coming hours.

“There’s a lot of investigation already underway. A lot of things were being realised as the crime scene was being processed, including the number of victims which are known by police officers,” Dougherty said. “Even of the facts of which we’re certain, those conversations are going to take place with the families first.”

Kelly McGannon, spokesperson for King Soopers, offered her thoughts, prayers and support to the store’s customers and first responders “who so bravely responded to these acts of violence.”

“Our hearts are broken over this senseless act of violence,” she said.

It is currently not known what the suspect’s motive was, whether he had any connection to the staff or customers within the store, or whether he was the only shooter.

In a statement issued via Twitter, Colorado Governor Jared Polis said “Today we saw the face of evil. I am grieving with my community and all Coloradans.”

“Tonight, ten lives were tragically lost,” Governor Polis said. “And tonight, the families of these victims, our fellow Coloradans, my neighbours, are hearing the devastating news that their loved one who simply woke up and went to work this morning, or who ran out to pick up eggs, won’t be coming home. Our community anxiously awaits more information on the victims, hoping it’s not our friends, coworkers and neighbours but knowing in our tight knit community it will be, and even if we don’t personally know them, we all mourn their senseless killing and our sense of safety in our local grocery store.”

Police chief Herold said that the investigation into the shooting was “very complex,” and would take no less than five days to complete.