For These Fishermen, Crossing an Imaginary Line in the Sea Can Turn Deadly

When Vinu Bambhaniya, a fisherman from the western Indian state of Gujarat, set out for sea, the weather was balmy and calm. It was January 2017, and Bambhaniya promised his wife that he would return in 20 days with a big haul of fish on a commercial boat, and he added, he would finally repair the shanty they called home.

A few days into the expedition, his ship crossed an imaginary line known as the International Maritime Border (IMB) between Pakistan and India. From that moment, Bambhaniya and 60 others were dragged into a border dispute that ultimately kept them from their families for over two years.

“One moment we were fishing, the next we were being chased by Pakistan’s navy,” Bambhaniya explained to VICE World News. “Our GPS clearly showed that we were on the Indian side but they gave us chase,” he said. He sped away not to escape, which would have been futile, but to warn other nearby Indian boats in the area. “We informed them on wireless to not come close.”

Having been previously caught and spending 13 months in Pakistan’s jail in the 90s, Bambhaniya knew he could not outrun the Pakistan navy. “I surrendered eventually,” he said. 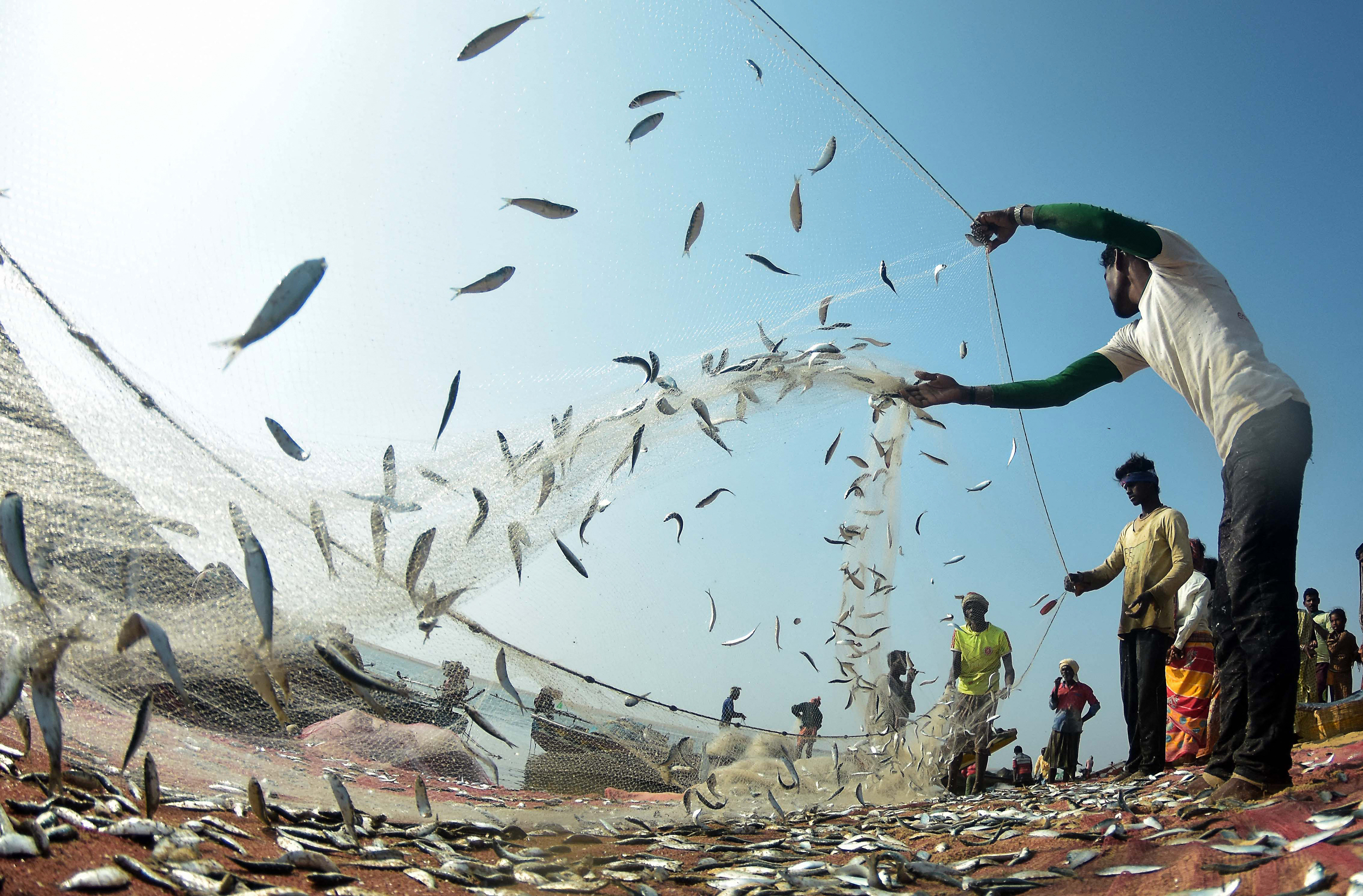 Every year, fishermen from both India and Pakistan cross each other’s maritime borders and land in jail. Both accuse each other’s naval officials of “illegal” apprehension.

Relations have been deteriorating between the two countries for a while, meaning there is little diplomatic effort to set fishermen free. India has often alleged that Pakistan refuses consular access to such prisoners. Pakistan also makes similar allegations against India.

When he was caught, Bambhaniya never pleaded innocence. “Once you get caught, the only thing to do is stay mum,” he said. “Arguments earn you a beating whether at sea or in jail.”

He spent over two years in a jail in Karachi, not knowing when he would get to go home. He said the jail stay was surprisingly better than what he had experienced in the 90s. “We were in a barrack that hosted 200 prisoners. We were let out of the cells in the morning, were given regular meals and even had access to television,” he said.

Bambhaniya knew he would be eventually released but underestimated the toll that incarceration would take on his family.

Finally, in April 2019, Bambhaniya and several other fishermen were taken to the Wagah border between the two warring neighbours and released into the northern Indian state of Punjab. From there he travelled home to Gujarat.

When he finally got home, the shanty he promised to rebuild had been falling apart. His daughter had left school and his teenage son had assumed responsibility for the family of five.

“My health has not been very good since I returned and my wife refuses to let me go to sea. We have been struggling to make ends meet,” he said.

Bambhaniya is illiterate. While he was away, his family did not even get the Rs 4500 ($61.49) monthly allowance given by the local state government to families of jailed fishermen. 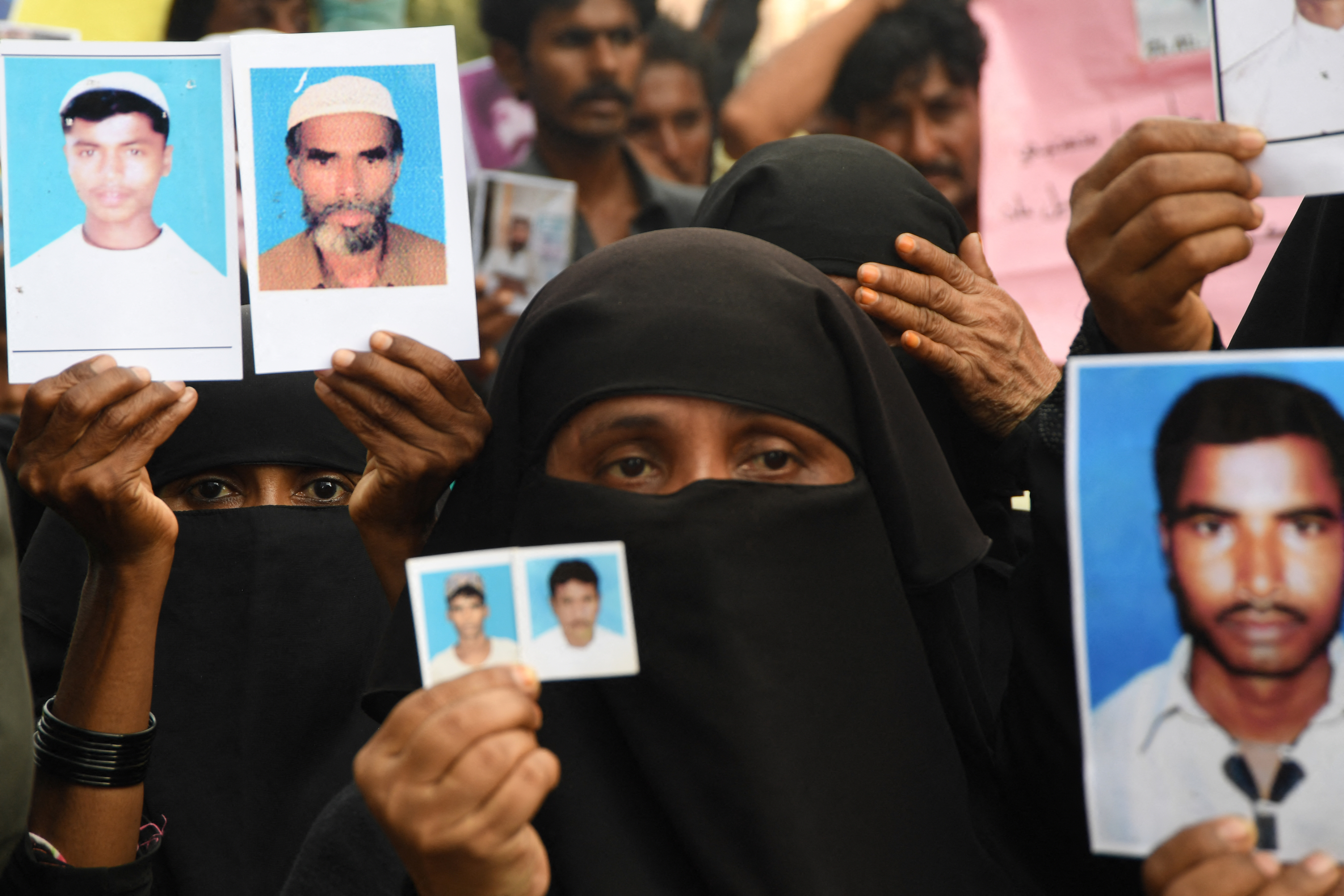 Family members of arrested Pakistani fishermen display their portraits during a protest to demand their release from India Photo: Asif Hassan/AFP

Since his return, he has been to sea only for two months. “Going to sea will mean I will earn better but I can’t run the risk of being caught again. I know my family will not survive it,” he said in a matter-of-fact tone. He now works on a farm where he makes Rs 100 ($1.37) a day.

What makes them cross the border

A host of factors drive fisherman on both sides to venture into each other’s territories. Dwindling fish stocks within the Indian side of IMB are a big driver, along with a range of seasonal factors.

Several fishermen told VICE World News that each fishing trip lasts at least a fortnight and costs a boat owner around Rs 2.3 to 3 lakh ($3161 to $4123). If a boat returns with a catch not enough to cover the cost or earn the owner a profit, the men lose their livelihoods as boat owners then prefer not to go to the sea. One boat staying ashore means at least eight fishermen miss out on work.

And then there are the plummeting numbers of fish. Balubhai Socha, a Gujarat-based activist, who has helped many jailed fishermen’s families access government schemes, said every time a fisherman returns with a poor catch, his prospects of getting rehired are grim.

Large scale industrialisation along Gujarat’s coast and dumping of untreated waste has had an impact on marine fishing. “These days we have to go deep into the sea if we have to get a good catch,” said Sarod Yusuf Patel, who has led protests against such pollution in his village Kavi in Bharuch.

Why the delay in release

Velji Masani, president of Akhil Bhartiya Fishermen Association that helps Indian fishermen in Pakistani jails said that he has been in touch with India’s Ministry of External Affairs to get the fishermen released but deteriorating relations between the two nations mean it is way down the priority list.

A judicial committee formed by Indian and Pakistan in 2008 has since then recommended that fishermen and women prisoners from both nations be repatriated after confirming their identity. But this is hardly ever followed. The last time the committee met was in 2013.

Jivan Jungi, the vice-president of the Gujarat Fishermen Association, said a lot of the delay is also because of bureaucratic lethargy. “Verifying the identities of fishermen caught in Pakistan is a tedious process,” he said.

Solution at hand but no one cares

Masani said the quickest way to solve this problem is for both countries to release fishermen once they are caught.

Jungi told VICE World News that not one fisherman has so far been caught with anything illegal. “So the best way to deal with it is to release them once you have assured yourself that all that they were doing is fishing,” said Jungi, adding that 10 nautical miles in both directions from the IMB have been declared as a no-fishing zone. “As per rule even if a person is caught within this range they have to be released but Pakistan agencies don’t follow it.”

He believes there is a need to increase this range to 25 nautical miles and to strictly enforce the no arrest rule within this mile.