This Indonesian Village Is Fending Off Deadly Tiger Attacks

Ramelan did not know he was saying goodbye to his wife for the last time when he left to clear weeds and plant oranges in a field one April morning last year.

But around midnight, the 42-year-old farmer’s mangled body was found about 100 feet from a small hut near his crops. Authorities believe a tiger stalked and ambushed him, dragging his corpse towards a small cave covered in thickets.

“The body was eaten by the tiger from the belly down. The condition was terrible,” Lembang Hutasoit, a forest ranger at Mount Leuser National Park in North Sumatra province, told VICE World News. He added that based on the body’s state, the tiger was “ferocious” and hungry.

Sumatran tigers are critically endangered, with less than 400 of them found in the world. Many live in protected areas of the lush, sprawling national park, which is home to a variety of animals, including the Sumatran orangutan and rhinoceros. The habitat of the Sumatran tiger is threatened by deforestation for agriculture and settlement, according to the World Wildlife Fund.

This has set up worsening territorial conflict between the big cats roaming the park and the thousands of farmers in villages and hamlets nearby who rely on the abundance of local crops to survive. Ramelan, who goes by one name, was believed to have been killed by a tiger in a field which is technically a conservation forest area. According to his wife, her husband bought two hectares of land in the area in 2017.

Dozens of residents in Ramelan’s community in Besitang sub-district used to own land illegally in the park. Some of them have been imprisoned because they encroached on the forest. But over time a deal emerged in which farmers were allowed to manage or tend land on the property but not own it. Ramelan was part of this arrangement, according to officials.

Close calls are becoming increasingly common. Days before Ramelan was killed, a staff member from the Wildlife Conservation Society was standing near the Leusner park when he saw a tiger peering out from behind dense brush in the distance. Diansyah, who also goes by one name, said he held his breath, fell silent, and tried to alert his colleagues with gestures.

"We were silent for a few minutes, like a hallucination. None of us could do anything, even record it with a cellphone camera,” he said, adding that the tiger went away after 30 minutes and disappeared into the forest. “Think of it as a ‘lucky day’, because it’s not every day that you can meet a tiger in the forest. But I hope I don't see it anymore, it’s really scary, especially after hearing what happened to Ramelan.”

Officials and residents have installed camera traps to learn more about tiger movements, while also marking tiger tracks and setting up makeshift firecrackers from bamboo to scare the big cats away. Human-tiger conflict across North Sumatra’s Langkat regency have worsened since 2014, when tigers first started killing livestock. 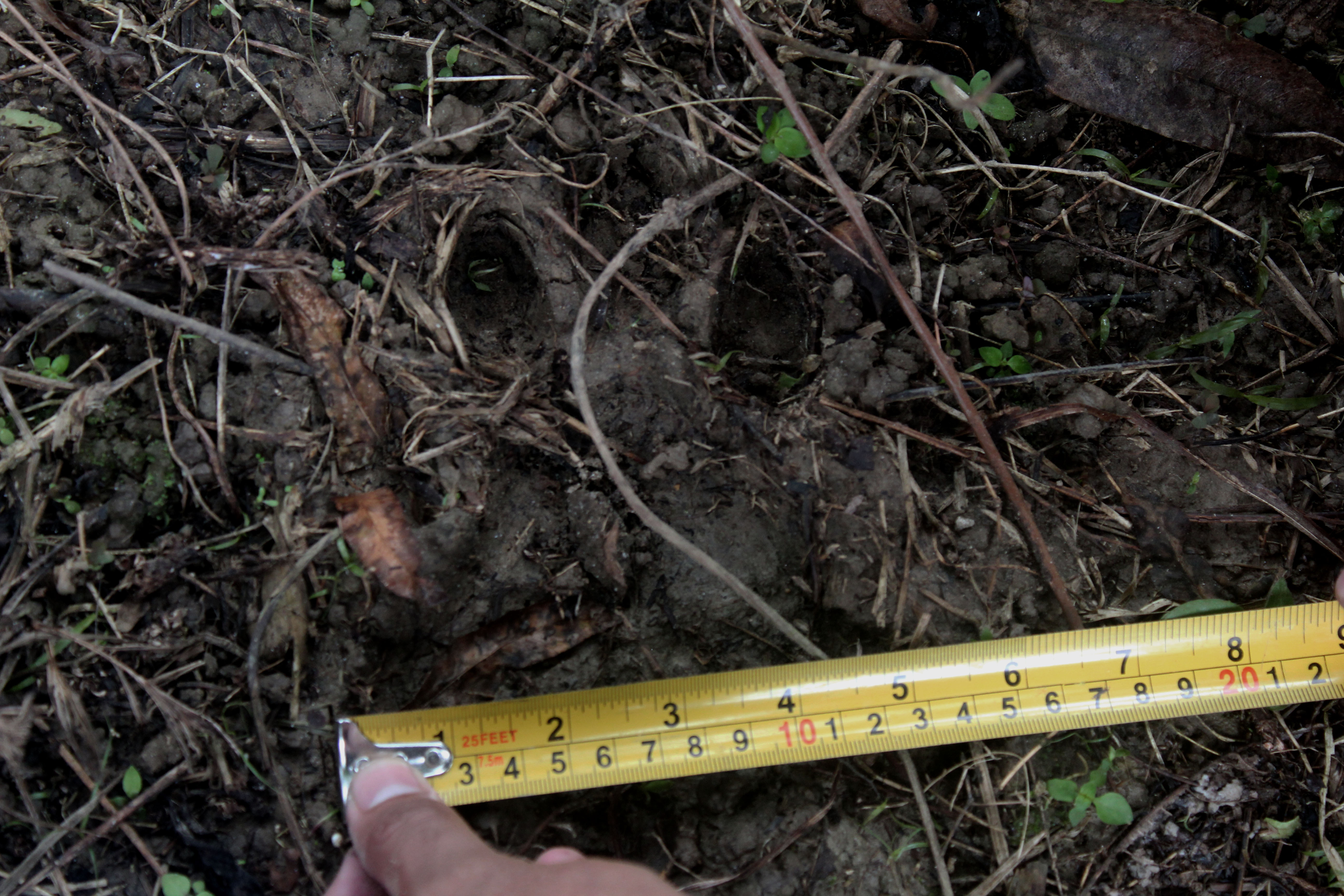 A tiger print in the mud is measured in Bahorok sub-district near Indonesia's Mount Leuser National Park. Photo: Tonggo Simangunsong

According to the North Sumatra Natural Resources Conservation Center, over the past year 22 animals, mostly livestock, have been killed. Ramelan was the first human victim, which raised fears even more.

In January, VICE World News visited communities living in an uneasy coexistence with the tigers. In Lau Damak Village in Bahorok sub-district, residents showed tiger trails where the animals had prowled, and pointed out new cameras fixed to posts as well as trap cages.

To save livestock, the Mount Leuser National Park Center has also helped build two barbed wire enclosures for animals. But not all residents have land on which to build such protections and must let their livestock roam.

Resident Hendri Sembiring said at least seven oxen and one goat have been eaten by tigers in the village. He is also in constant fear of them.

Apart from community patrols, every night residents build fires that they hope will help ward off the animals. They also set off firecrackers. However, the solution has not been very effective. Sembiring proposes trapping the tigers and moving them to another location.

“I think that’s the best solution because the residents are very tired of keeping watch at night,” he said. 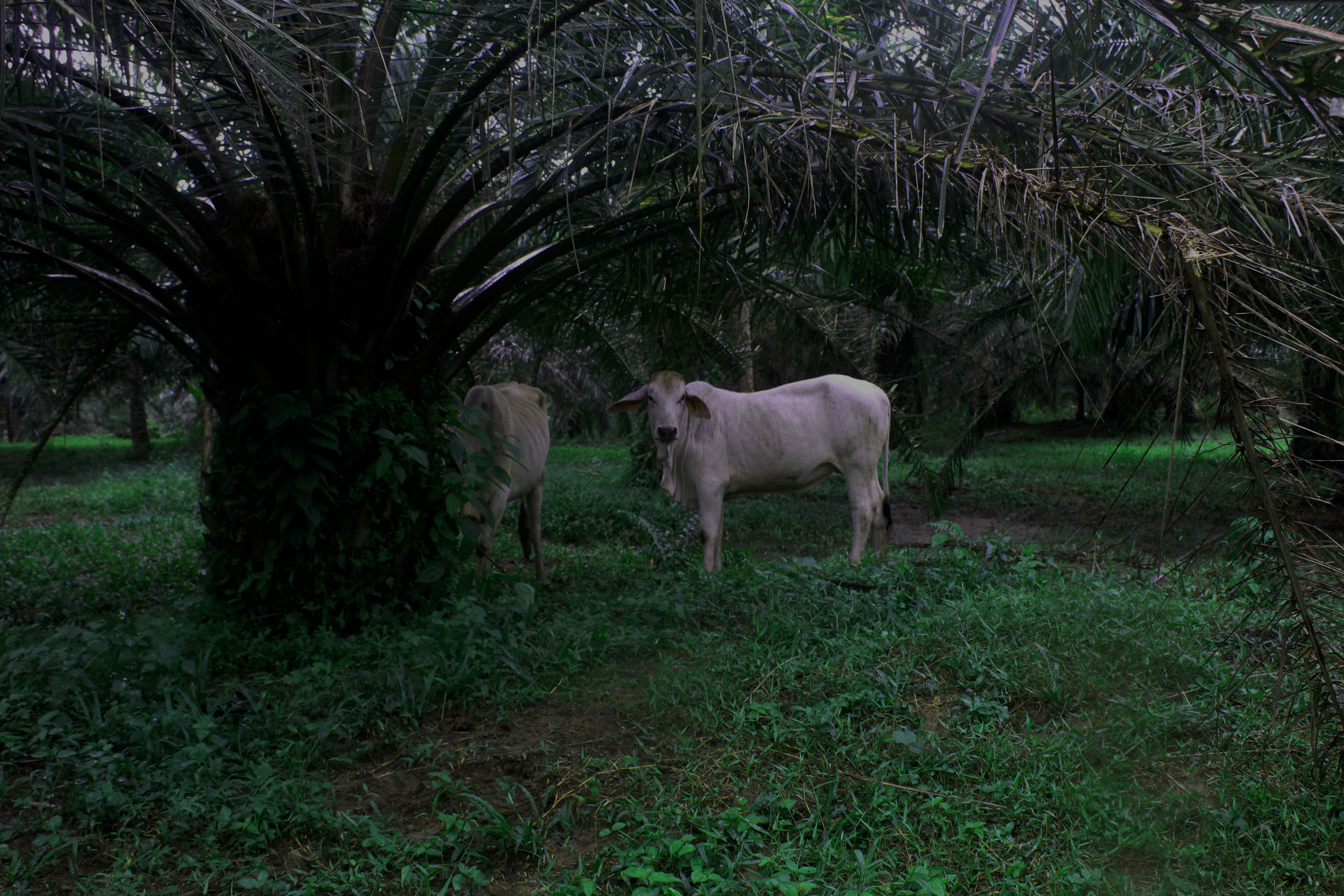 Cows graze in a forested area around a national park in North Sumatra province, making them easy prey for tigers. Photo: Tonggo Simangunsong

Malik Nasution, the head of nearby village Timbang Lawan, is similarly worried. But instead of traps and cameras, he is proposing that authorities bring in so-called “tiger handlers,” or local men who specialize in spiritual rituals that are believed to persuade tigers to stay away.

“We want the tiger to be caught because the residents are already restless. They are afraid to go to the fields, even though the majority of residents here earn a living in the fields,” he said.

But moving them away is not a good idea, according to a Sumatran tiger researcher named Sunarto who has worked for the World Wildlife Fund in Indonesia.

He said human activities were the main cause fueling conflict, as cleared fields reduced space for tigers to roam, creating inevitable confrontations. The introduction of rubber plantations is another problem, removing dense jungle essential for hunting tigers.

“Tigers need protective plants like their habitat in the forest as ‘covers’ to lurk and ambush their prey. If not, tigers will find another way. Livestock around them will become prey,” he said.

He believes the conflict can only be resolved with better appreciation of the Sumatran tiger as an endangered species that must be protected, while balancing the needs of farmers and their livelihoods.

Capturing and moving them is not necessarily effective because the tiger has a very wide range, he said, and the national park is their main habitat. He proposes mediation between authorities and communities to come up with more sustainable solutions, such as changing the pattern of livestock grazing and better controlling poachers who disrupt the food supply of the tigers, which forces them to hunt closer to villages.

The death of Rameln created an urgency to find answers, but there was little to be done about helping the family with its grief. After the body was found, Ramelan was taken to his house in the early hours of the morning. The villagers told his wife, Sri Utari, that her husband had died because of the tiger attack. She was devastated.

His wife couldn’t bear to look at her husband’s mauled body. She also didn’t want his youngest son to see Ramelan like that.

Utari said she was deeply shaken by what happened and it took weeks to emerge from a state of utter sadness. She said they never suspected something like this could happen to them. Her youngest child, who is four years old, cried every night for more than a month.

Now she says she won’t visit the area again and doesn’t care what happens to the crops.

“I’m traumatized and don’t want to go back there,” she said.