Once and For All: Are Cast Iron Skillets Worth the Trouble?

Our cultural food discourse is damn capricious. One day, we get to wake up in a world of tender frog cakes; The next, Shawn Mendes x Chipotle are giving us a cauliflower rice collaboration that absolutely no one asked for (but is actually…pretty good? shhh). But in the fickle, fleeting world of gastro obsessions, one piece of cookware is searing our brains: cast iron skillets. The internet is losing its mind over these storied pans:

They even have their own kink:

How do we make sense of these Cast Iron Druids, each imparting their own supposed-wisdom for the most altruistic path to Flavortown?

“Cast iron is simple to care for,” writes one Reddit user in an is-it-worth-it? type thread, “the only confusion I see [is when people confuse] their nasty pans with 'seasoning.'” Ouch, but sure. Then someone else jumps in, saying, “[use] 120 grit sandpaper to smooth the interior,” which hurts our brains, but again, why not—and just as we start ordering them, someone detonates the whole investment with a comment like, “Buy one. But don't invest in one. Cast iron skills are terrible for ROI.”

It’s a lot to take in. Especially if you want to cook more, or better, but don’t know what culinary information and expenses you should be prioritizing (e.g. water-to-rice ratios, or why this tomato corer moonlights as a butt plug). At a time when we’re making the most use of our kitchens but many of us are especially broke AF, we wanna know, once and for all: Is cast iron clout worth the hype, or just cookware elitism? We asked two chefs we trust, Rasheeda McCallum and Isaac Toups, for their thoughts on the greatest debate of the 21st century.

In order to understand the cult of cast iron, maybe we need to know the history of the cooking tool. “Cast iron pans originated around 220 AD in the Han dynasty,” Toups tells VICE, “They became widely used all over Europe by the 16th century.” So that nixes our faux-hype theory, as these pans have clearly stayed their ground throughout history. “My favorite thing about cast iron,” he says, “is the durability. You can bring them to the camp, and cook over an open fire. Use it to deep fry chicken in the back yard. Use it like a hammer, and other fun stuff.” A hammer? Toups would. And we love him for it. 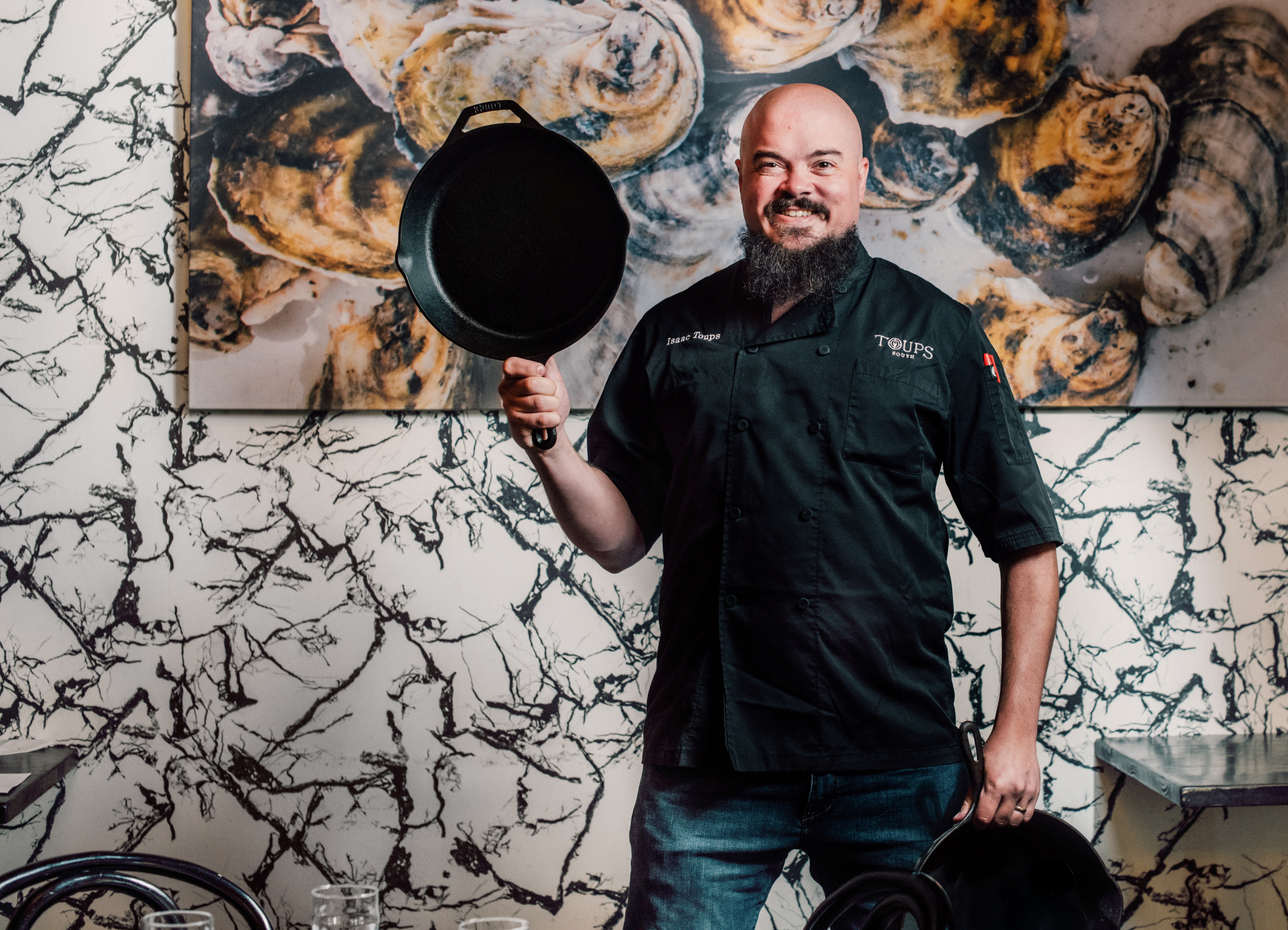 If you’re into Cajun cooking, Toups is your dude. The proud Rayne, Louisiana native grew up in the heart of Cajun country, and continues to perfect his poutine at Toups’ Meatery in New Orleans. He’s also a three-time semi-finalist for the coveted James Beard Award “Best Chef in the South,” a Top Chef finalist, and a regular over at MUNCHIES. He’s all craft, and zero pretension, which is why we knew he’d cut through the cast iron BS—especially on what the polarizing seasoning process entails.

“A lot of people get the wrong idea of cast iron pans,” he says, “thinking they are dirty because of the curing process, in which you intentionally leave oil on the outside of the pan after each use. Also, people don’t realize the multiple uses of cast iron. Deep frying, braising, searing and roasting are all great.”

McCallum—chef, nutritionist, and director of the Black Chef Movement—sings the same praises of versatility for cast iron, saying it’s not so much a beginner vs. advanced-chef kind of investment; it’s all about how you treat your pan. “I was lucky enough to grow up having not one but two cast irons in my home,” she says, “My family is 100-percent Jamaican, and we call cast iron [pans] 'dutchies' in our country, which, essentially, is a Dutch pot (or pan) made up of 100-percent cast iron. We used our style of cast iron skillets to pan fry, deep fry, stew, and even bake. I love how versatile they are.”

While we should absolutely celebrate some of cast iron’s well-known strengths, i.e. through cooking the perfect rib eye steak with our dude Matty Matheson, McCallum and Toups’ declarations of versatility helps save it from the weirdly polarizing, manly-man cis-core mythology it’s fallen into. “For many men,” explains Jessica Furseth, in an article about why cast iron cookware is so venerated by food dudes, “[it’s] more than a cooking utensil – it’s a lifestyle.” Think Anthony Bourdain, Brad Leone, and tons of skillet bro-dominated subreddits. “Clearly,” she says, “the cast iron internet is a stereotypically ‘masculine’ space.’” Our cast iron does so much more than serve some He-Man bender, and we need only to other, innovative chefs bringing them into their cooking ethos. Enter McCallum (center):

At the heart of McCallum’s many achievements (in addition to her work as a chef and nutritionist, she is also the creator of a YouTube cooking channel that seriously saved our asses in early quar) is a bold commitment to community care. McCallum founded the Black Chef Movement in NYC to spearhead a project that “focuses on feeding Black Lives Matters activists,” by bringing nutritious, gourmet meals to thousands on the front lines. So, yeah, you could say her cast iron has been busy. But that’s what it's cut out for. 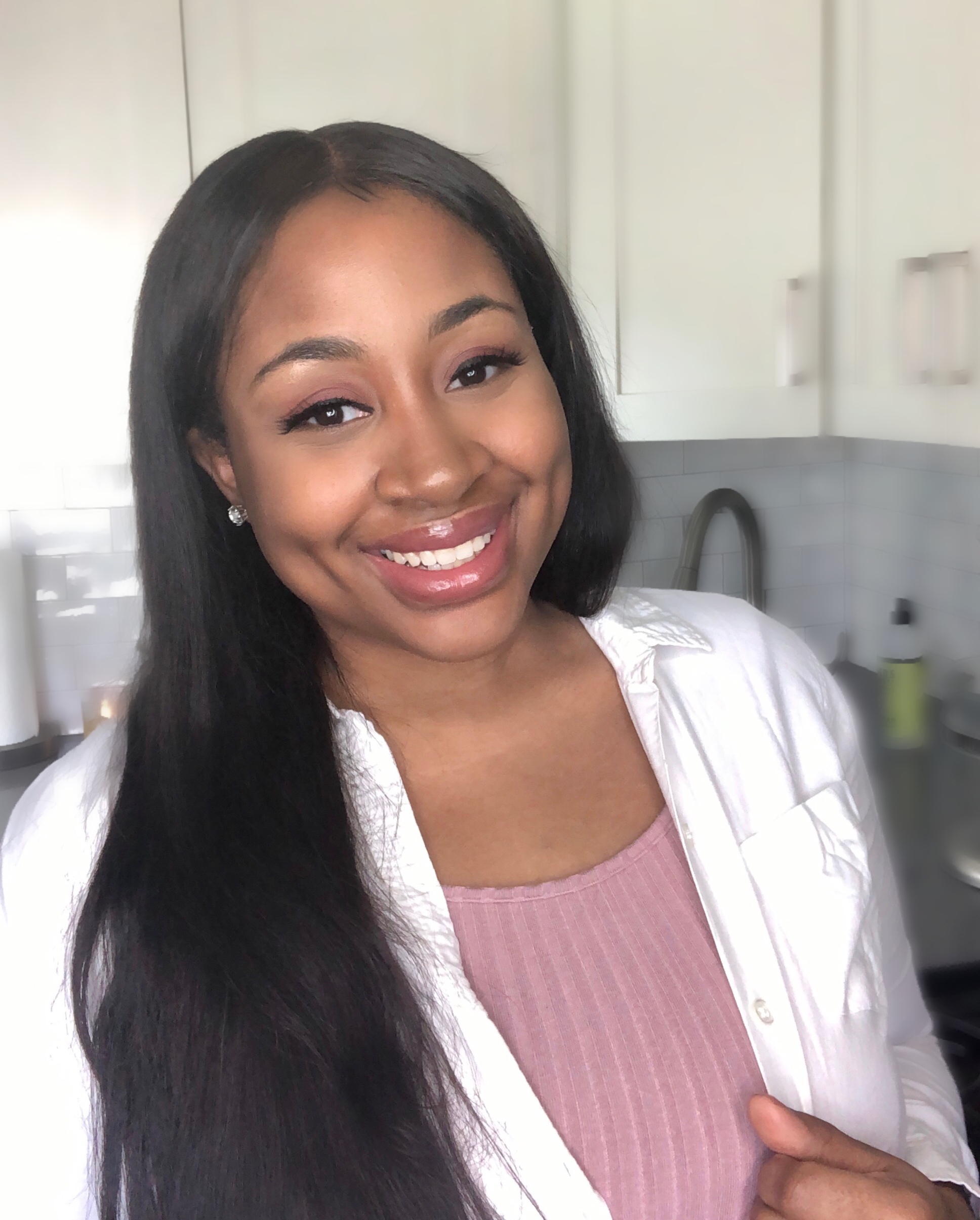 “I like them because they're all hand-made,” she says specifically of dutchies, which you can find with a little digging online, especially on sites like Etsy and eBay. “They're usually at least 12 inches wide in circumference, and durable enough to be used outside over an open fire.” And, yes: “After cooking, be sure to oil your pan to seal in all that flavor.” 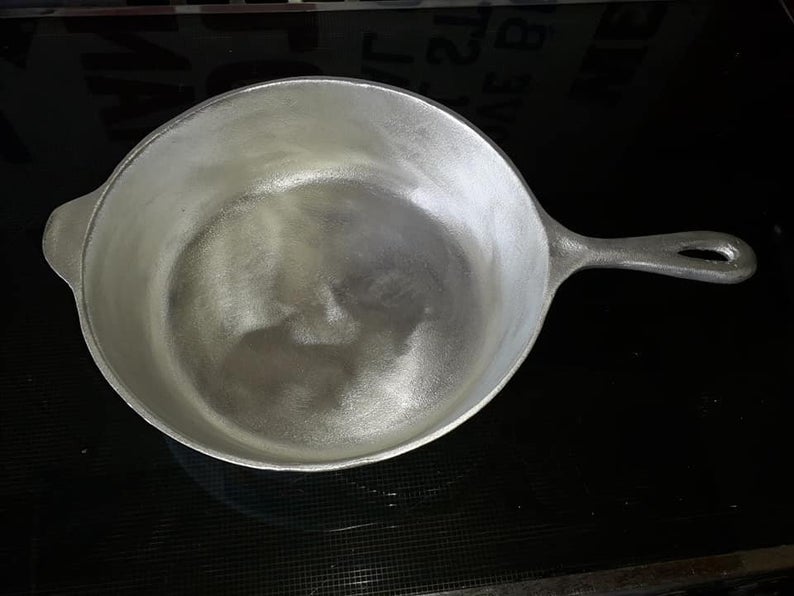 Again, the important thing here isn’t so much price as it is pampering. “If you take care of your cast-iron, they can last for years, she says, “Leaving excess water may cause rust.”

Another great place to start is with a Lodge cast iron skillet. It’s like the station wagon of cast iron skillets (but won’t cost you hundreds), and MUNCHIES host Matty Matheson swears by Lodge pans so much, he included one in our holiday gift guide a few years back: 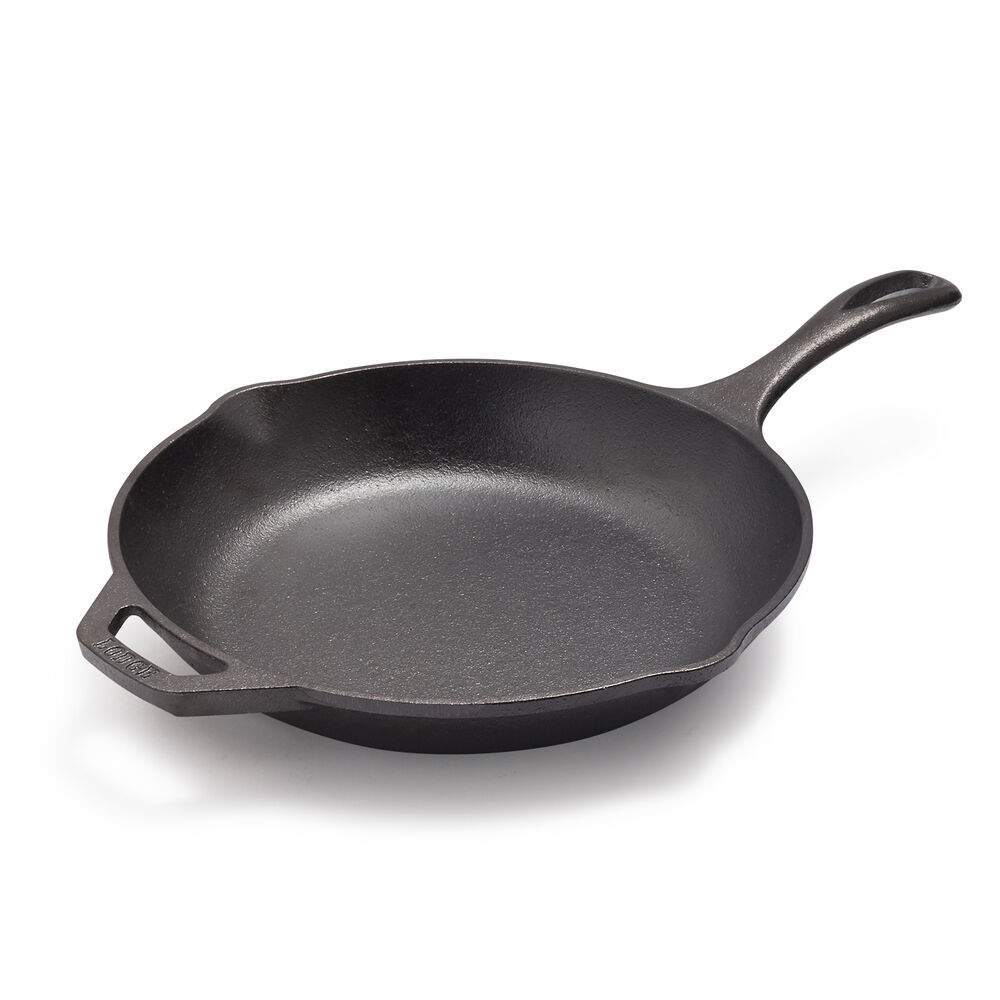 If wielding a heavy 12-inch-er is too intimidating for you, Lodge even makes mini skillets, or as we like to call them, smol bois. This one is but a day over six inches, and great if you just wanna get the feel of frying an egg or two in some cast iron. 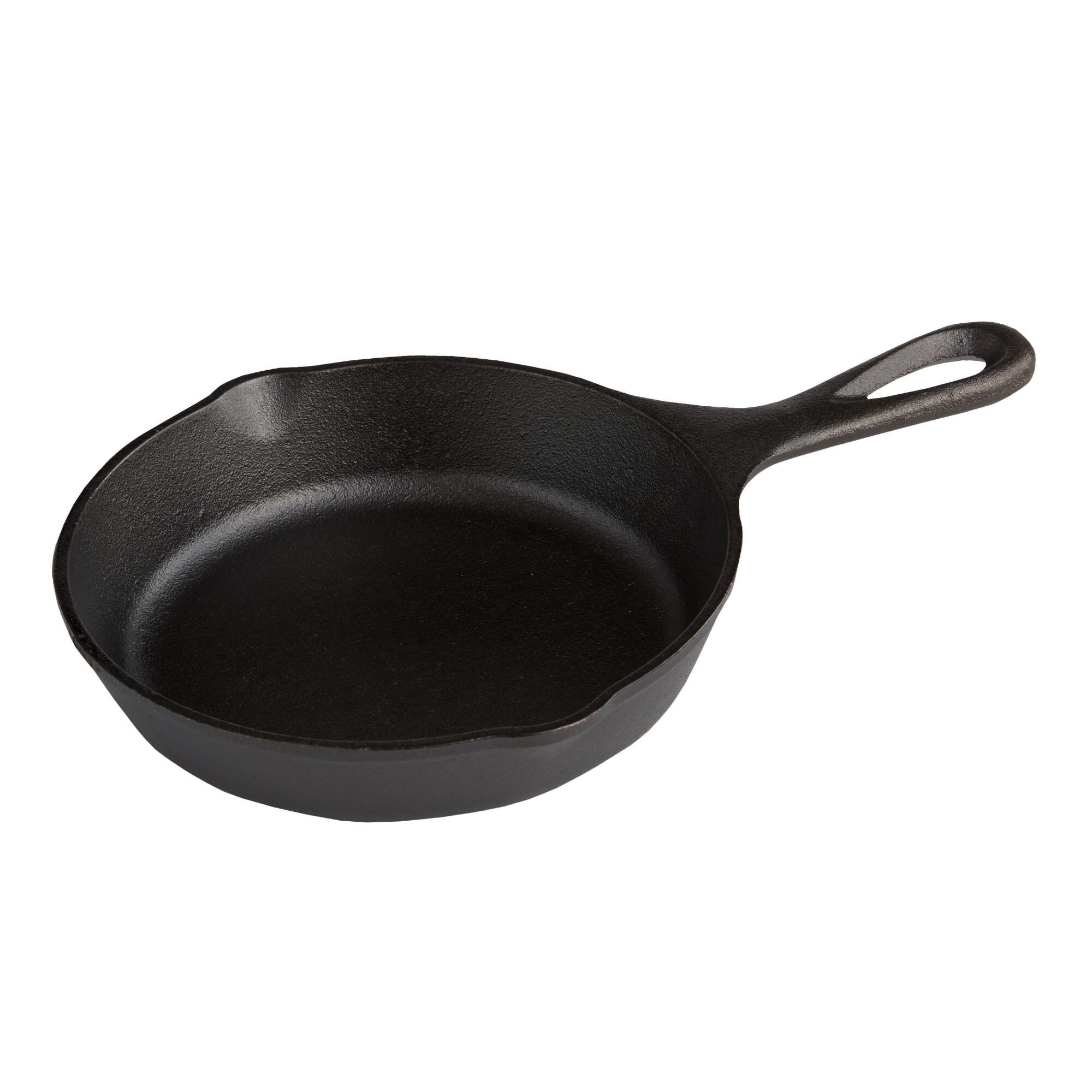 If you’ve got a little more money to drop, and want something that weighs less, Field Company also offers a great pan: 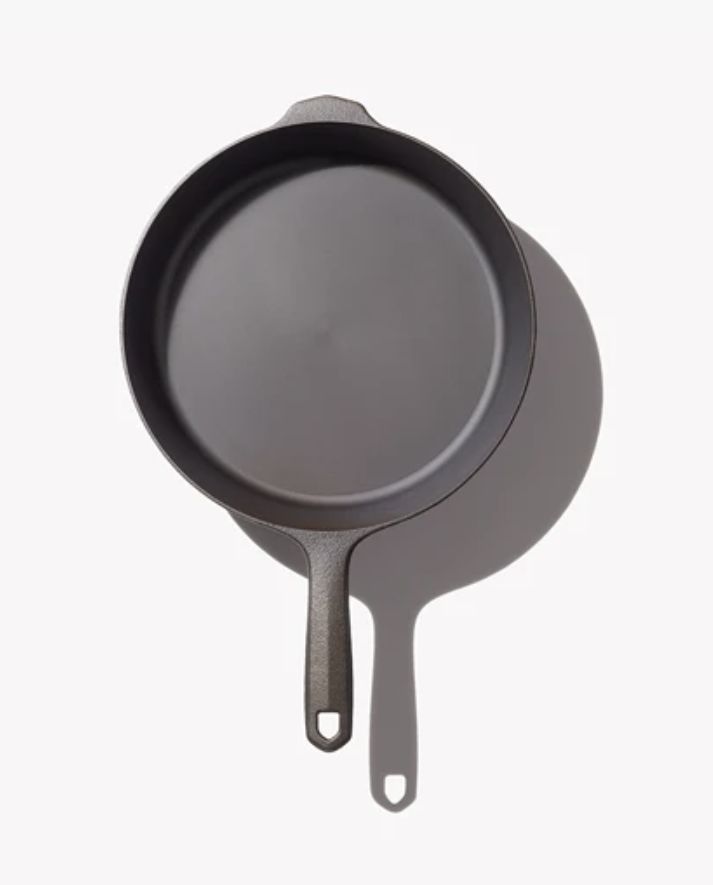 If you’re keen on joining a healthy cast iron cult, Field Company’s arms are wide open. The co-founder, Stephen Muscarella, held our hand through the do’s and don’ts of caring for one of their skillets, further dispelling all those divisive myths about cleaning (do: use soap, if you want) and ideal seasoning (don’t: use coconut oil).

For something more eye-catching, Staub’s classic red (sorry, ~cherry) cast iron is a favorite of San Francisco chef Michelle Minori, who goes as far as saying that “cast iron is really all you need to cook with” in this MUNCHIES vidn. “It retains heat really well,” she says, “[is] really great for nonstick, and it’s super easy to clean.” This one is also almost 50% off right now at Sur La Table: 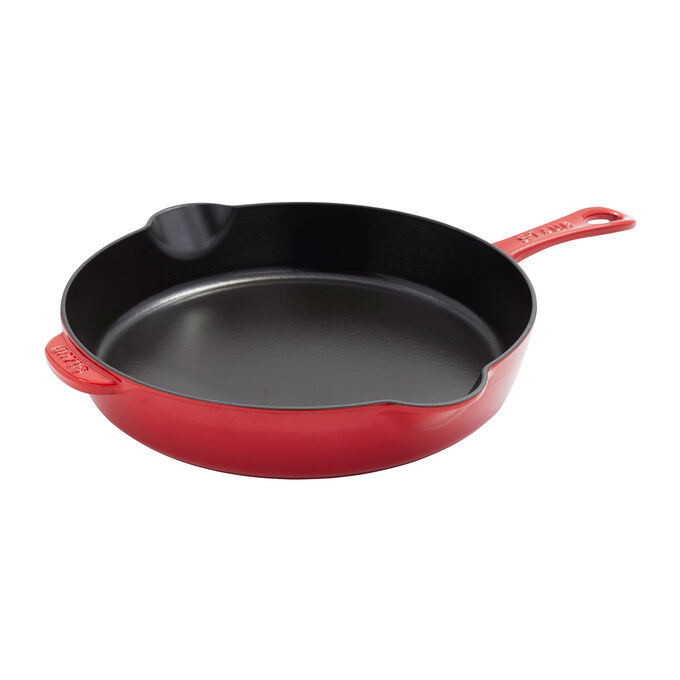 “There is [also] no reason to spend a lot of money on them,” says Toups, “I like going to the local thrift shop and picking old cast iron pans and curing them myself.” 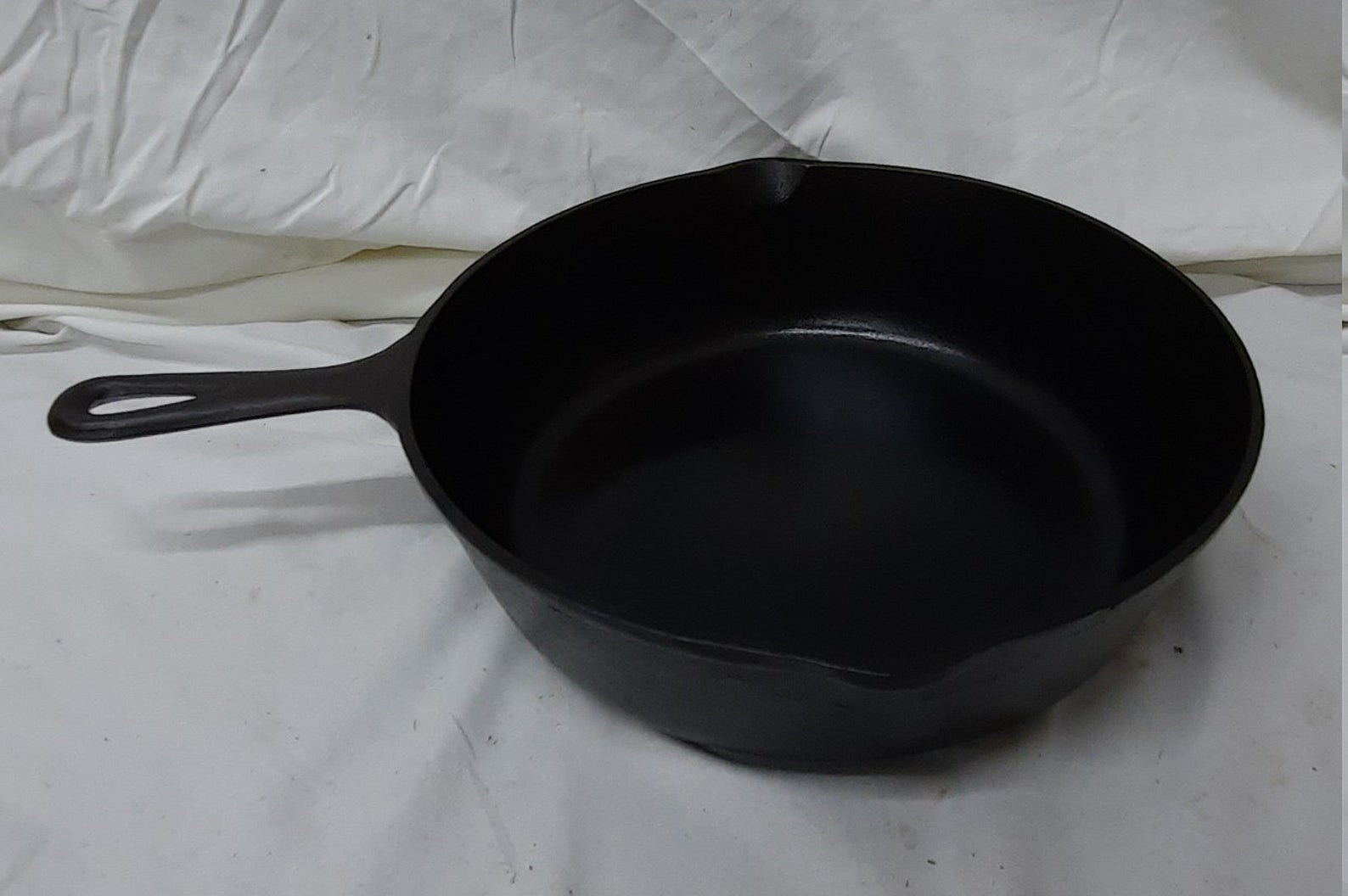 And if you’re still feeling clueless about how to clean a cast iron, we promise you have nothing to fear. You can grab one of those nifty chain-mail scrubbers from the tweet above for $20 or less, like this one from Smithey Ironware Co.: 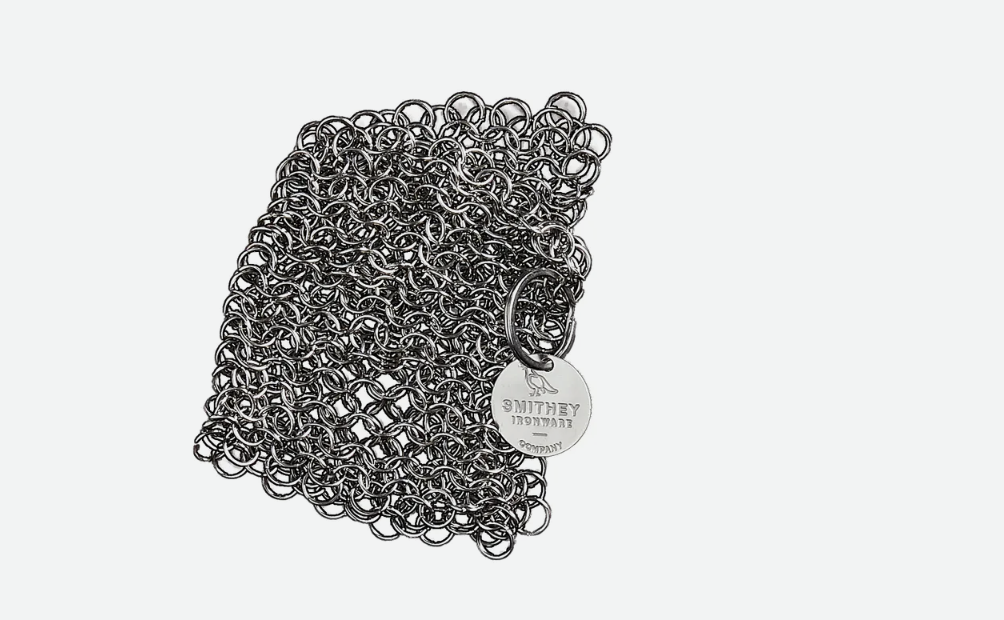 Or this even cheaper version: 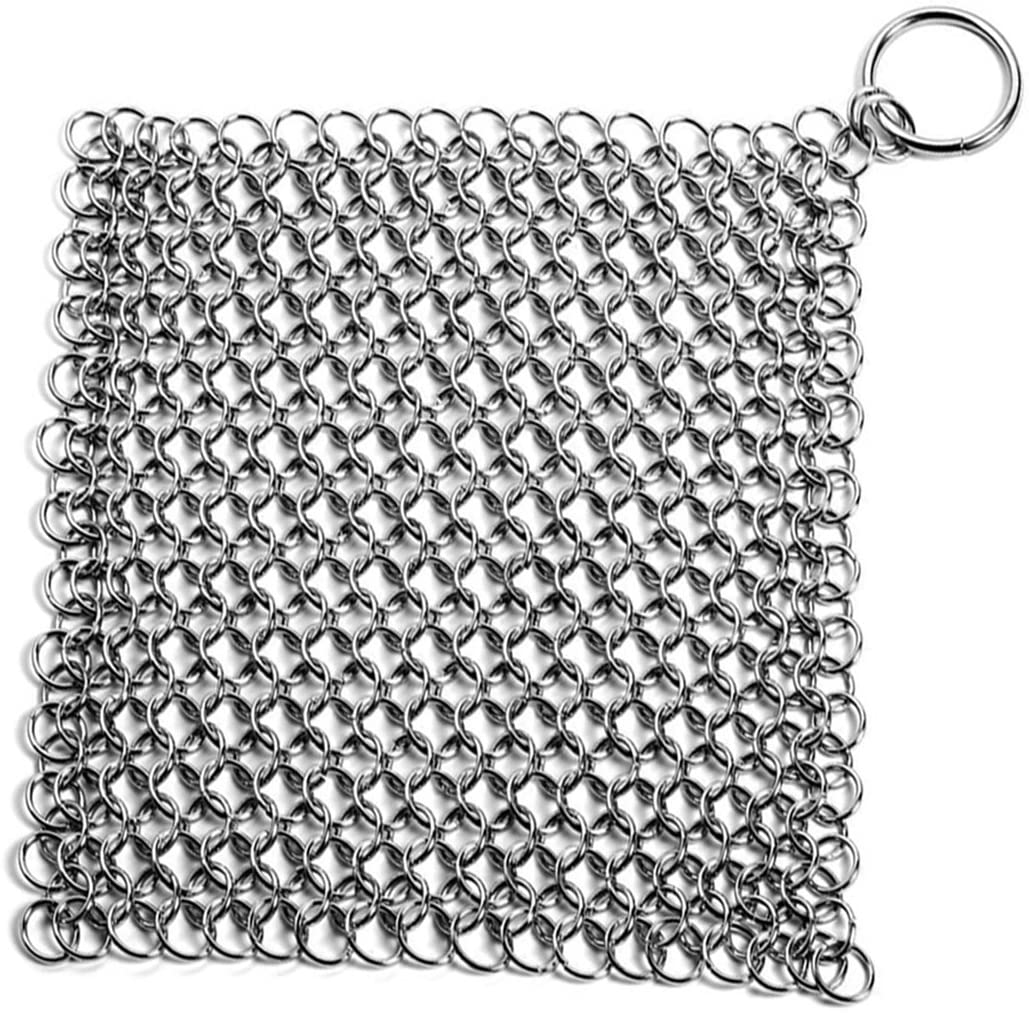 And Field Company offers a complete cast iron cleaning set, with a scrubber and seasoning oil, for $40—not nothin’, but not a lot if you consider that a properly cared-for skillet can last for decades.

At this point, our eyes are cast iron-ed out. So we had just one more question for our experts: What about seasoning for people who don’t consume animal products? Is a cast-iron still a must if you don't break it in with buttery eggs and cooked-on bacon remnants? “Plants and meat-alternatives still have a ton of flavor!” says McCallum, and Toups agrees, which is great for our stupid moral pedestal, “I like to season my pans with a high-temperature refined oil. I like avocado oil. It’s shelf stable and won’t go rancid. Also, you can get [it] extremely hot without turning bitter.”

So maybe cast iron skillets aren’t so scary. Maybe they’ve been an easy outlet for our weird pandemic productivity complex. Maybe our noodle arms just needed a little more encouragement to find a rescue skillet at Goodwill. Whatever doubts we had, consider them cast away.