The Rise and Fall of Hong Kong’s ‘Mulan’

Agnes Chow wanted out. In October 2014, weeks after angry demonstrators surrounded Hong Kong’s government headquarters to demand a greater say in selecting the city’s top official, the then-high schooler quit her role as a leader of the protests.

“I am sorry. But I am only a 17-year-old,” Chow wrote at the time in a Facebook post announcing her resignation as the spokesperson for Scholarism, a pro-democracy student group founded by her fellow advocate Joshua Wong. “I’m under exceptional stress, and I’m extremely lost and tired.”

Little did she know that her reluctance to be the face of a new generation of young Hong Kongers, desperate to fight for greater democracy under Chinese rule, would follow her into prison - six years later. 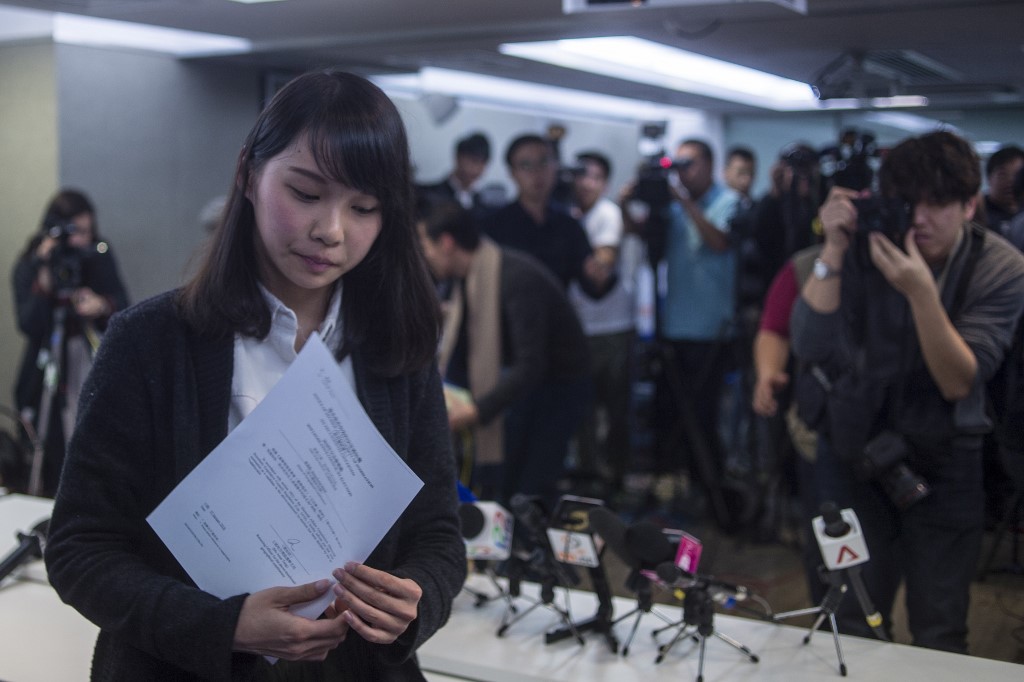 Agnes Chow reacts after she was banned from a 2018 legislation election in Hong Kong. Photo: PHILIP FONG / AFP

On Dec. 2, 2020, the day before she turned 24, Chow was jailed for an act of defiance. In June last year, she joined a heated demonstration outside police headquarters in downtown Hong Kong to protest against an extradition bill seen as blurring the line between the semi-autonomous Chinese territory and mainland China. Her Scholarism allies Wong and Ivan Lam were also sentenced to prison over their roles in that rally.

The local government would later drop the controversial plan, but the city that emerged from the unrest was no longer the same.

As Chow prepares to spend the next ten months behind bars, her rise and fall reflect a fundamental shift in her city’s turbulent political landscape.

Until as late as 2014, when Chow rose to prominence, Hong Kong’s democracy movement had been defined by a desire to reform local elections. When the former British colony returned to Chinese rule in 1997, Beijing promised that Hong Kongers would run their own city and eventually choose the city’s leader through popular elections.

In 2020, the movement is no longer about wresting democracy from Beijing. Instead of demanding greater freedoms, political activists wake each day to news of loss – the disqualification of pro-democracy lawmakers, the exile of dissidents, and the jailing of one of their own.

Chow has been compared by her supporters to a legendary Chinese war heroine, and her fluency in Japanese earned her fame in the country that rivals that of a pop star. But the 24-year-old’s foray into political activism came almost by accident.

“Agnes was forced to grow up fast because of the injustices that were happening around her,” said Nathan Law, who co-founded the activism group Demosisto with Chow.

“I don’t think she wanted the fame.”

The self-described “shy student” was raised in a conservative Chinese Catholic household where social issues were not discussed.

She began dabbling in politics at the age of 15, in response to local government plans to mandate “moral and national education” in classrooms.

Some of the teaching materials were found to favor the Communist Party, describing it as a “progressive, selfless, and united" ruling group. Chow met Wong in the ensuing protests and later became spokesperson for his youth advocacy group, Scholarism, until she quit in October 2014. 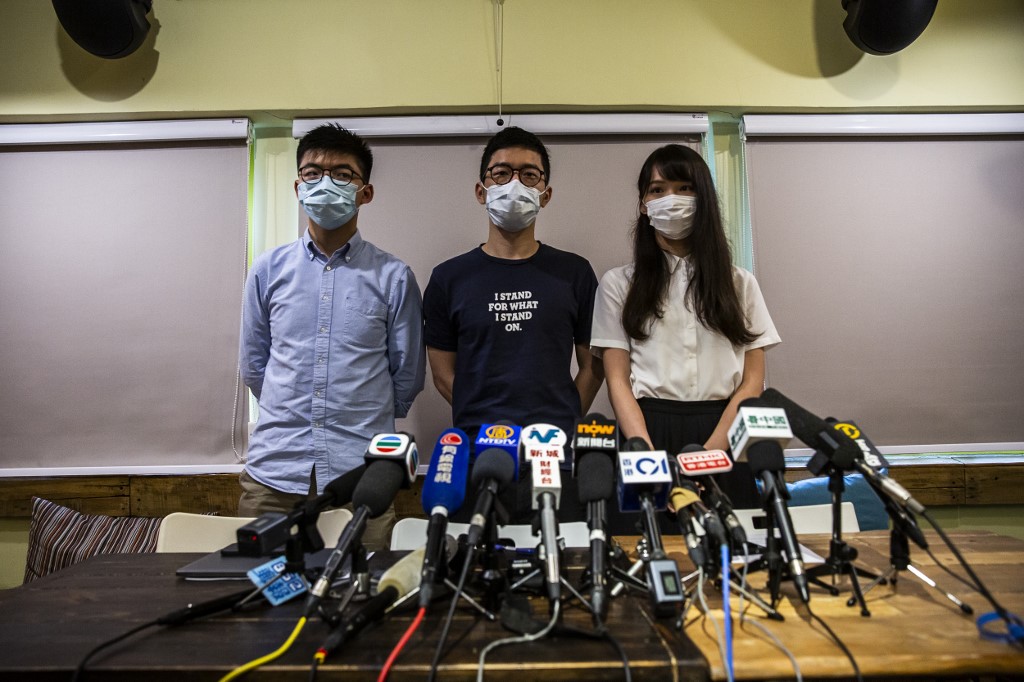 Law said that it was Chow’s “strong sense of justice” that compelled her to emerge from her political hiatus before finishing college and return to the pro-democracy movement.

“She couldn’t bring herself to ignore everything that was happening around her and she decided to put herself out there,” Law told VICE World News.

This week Chow, Wong and Lam made headlines after they were sentenced to prison, having pleaded guilty for their involvement in the 2019 anti-government protests.

For Chow, it was a scenario that she had previously expressed fears about. Speaking to tens of thousands of her supporters on Twitter, Facebook and YouTube in the weeks leading up to her detention, she put up a brave front but admitted that the stress had, once again, been getting to her. She also revealed that she developed a phobia of doorbells and knocks since being arrested in August under Beijing’s feared national security law.

When a judge delivered Chow’s prison sentence, she broke down and burst into tears.

A movement in free fall

The jailing of the three activists bookended a long and tough year of crackdowns on the city’s dissidents, empowered in part by Beijing’s imposition of a new national security law.

In less than six months, authorities have invoked the law to arrest some of the city’s most outspoken activists, including billionaire media mogul Jimmy Law, owner of Hong Kong’s most influential pro-democracy newspaper, Apple Daily.

More recently, pro-democracy lawmakers resigned en masse to protest Beijing’s move to oust four of their colleagues for endangering national security. Ted Hui, one of the legislators who resigned, fled the city. “Hong Kong has officially fallen under the tyranny of Chinese Communist Party rule,” he wrote on Facebook.

The sense of doom that now permeates Hong Kong’s democracy movement stands in stark contrast with the rare but significant wins it had once experienced. The 2012 protests successfully pressured the government to shelve the national education proposal, and the unrest in 2019 forced the Carrie Lam administration to withdraw the controversial extradition bill.

But with many faces of the resistance now behind bars – Chow was jailed for 10 months; Wong received 13.5 months – Hong Kong politics has entered an era defined by control and fear.

Unlike Wong and Lam, who have each served jail terms for their activism, this would be Chow’s first imprisonment.

Activist Jeffrey Ngo, another friend of Chow’s from her Demosisto days, voiced his concerns about her mental state, highlighting the fatigue and appetite loss she had experienced while in detention awaiting trial.

“While I have no doubt that Joshua and Ivan will be fearless in speaking up for themselves if they see any form of mistreatment in prison, it will be Agnes’s first time in prison and she will definitely be less accustomed. She will be very affected and vulnerable.”

The trio pleaded guilty to unlawful assembly charges in order to secure more lenient penalties, a lawmaker previously suggested, but their supporters were still devastated after learning of the sentences. 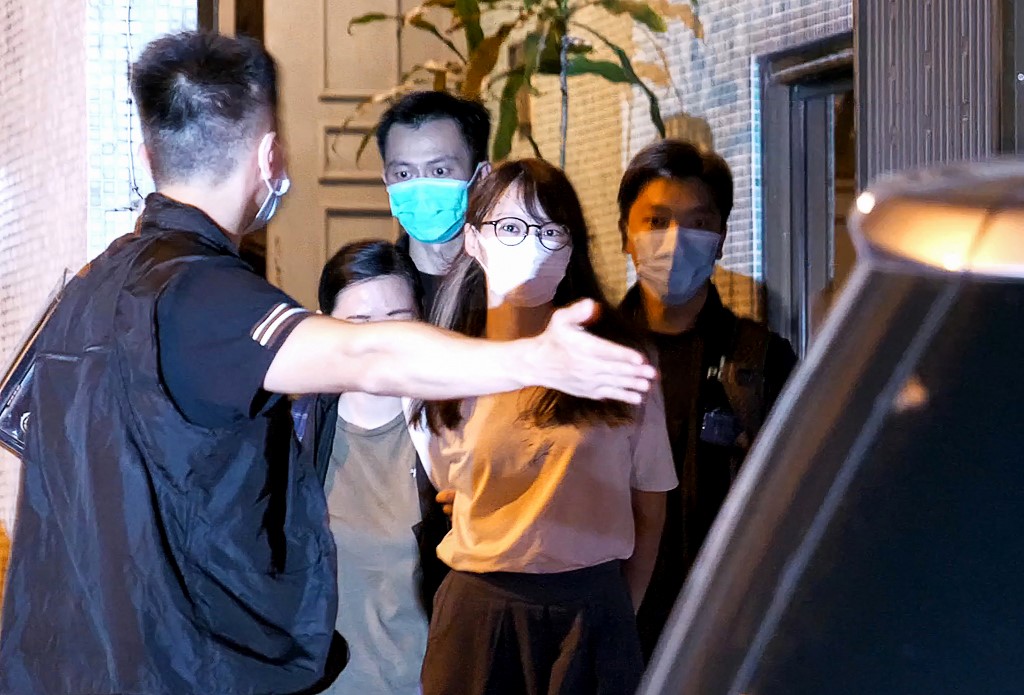 Before her arrest and imprisonment, Chow’s supporters pitted her against Chinese-American Disney star Liu Yifei, who incurred the wrath of many in Hong Kong when she backed the police’s crackdown on the protests last year as they grew violent.

They slammed Liu’s casting as the famed Chinese heroine Hua Mulan and ridiculed her performance, lauding instead what they said were Chow’s dedication, bravery and heroism - calling her “the real Mulan”.

Earlier this year, as the Hong Kong government moved swiftly to prohibit street gatherings in the name of containing the pandemic, an online campaign to boycott the release of Disney’s “Mulan” went into full force.

Organized by Hong Kongers on internet forums and on the popular Telegram chat app, the campaign demonstrated one of the last viable methods to put pressure on perceived supporters of Beijing and, by extension, the Chinese government.

But the title of Mulan wasn’t one that Chow wanted. “I don’t think I deserve it,” she told the BBC ahead of her arrest, “but it’s not a bad thing if it helps draw attention to the situation in Hong Kong.”

Law said Chow had always been a person who remained “extremely humble” about her achievements.

“She is someone who takes on very heavy responsibilities and duties that are often larger than herself but she never hesitates to stand up for what she believes in,” he said.

He added: “She is very down to earth and has a gentle demeanor that stirs up a lot of public empathy but she also has a fragile side. The fears she has are shared by many other brave young Hong Kong female protesters who continue to put their safety at great risk.”

News of Chow’s prison plight reached Japan, a country where she commands a devoted following but also sits at constant odds with mainland China due to Japanese wartime atrocities and continued territorial disputes.

Chow, who taught herself Japanese, had used her influence and favorable image in the country to galvanize support for Hong Kong’s activitst.

But attempts to rally foreign governments to their side became a perilous exercise under the national security law which forbids “collusion with foreign countries” and threatens the maximum punishment of life imprisonment. The law explicitly defines calls for a foreign government to sanction Hong Kong or Beijing officials as a crime.

Chow has been harshly criticized and accused by pro-Beijing mouthpieces of “kneeling” before anti-Chinese politicians in Tokyo and was arrested in August on suspicion of collusion.

“She taught herself Japanese simply because she’s into the culture. She has loved anime and J-pop since a young age,” he said, adding that she has also been learning Korean.

Law, who fled Hong Kong in July for London, said he was saddened and helpless as he watched his former allies jailed.

“If she didn’t step into activism, she could remained a regular Hong Kong teenager who was into anime,” he said. “I don’t think she realizes the sacrifices she has made in the name of freedom and democracy.”