The Epic Final Journey of the ‘World’s Loneliest Elephant’

A 5-ton animal, a Soviet-era cargo plane, and thousands of miles to safety: the dramatic rescue mission to bring a distressed elephant from Pakistan to a sanctuary in Cambodia is officially underway.

Dubbed the “world’s loneliest elephant,” Kaavan has spent more than 35 years in the Marghazar Zoo in Islamabad after being sent there from Sri Lanka in 1985. Elephants normally live in herds or family units, but Kaavan has been alone the last eight years after his sole companion, another Asian elephant named Saheli, died.

Chained up most of the time in a place under poor conditions, he became aggressive, overweight and grew deformed nails. But his fate changed in 2016, when an article in the Los Angeles Times put him at the center of a global media campaign that attracted the attention of the singer Cher, who hired lawyers in a legal battle that ended this year. 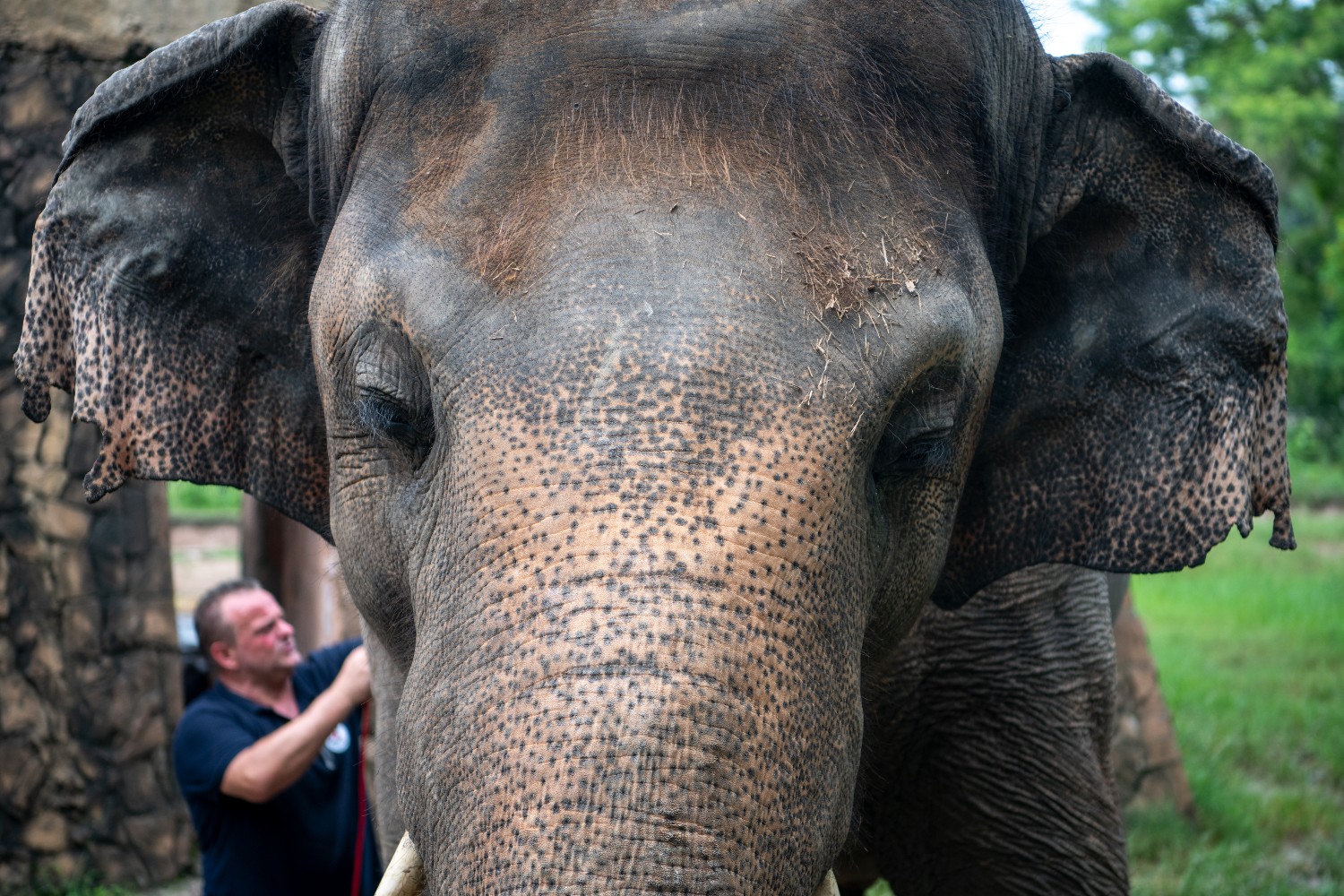 In May, Islamabad’s High Court decided Kaavan and other animals at the zoo must be released or sent to a location with better conditions. A transfer to the respected Cambodia Wildlife Sanctuary, where other Asian elephant companions await, was approved. But to state the obvious, it’s not easy to move an elephant, especially one that is on edge after years of captivity. Kaavan also has a weight problem. He is about one ton heavier than average.

“Every animal transfer, especially those of large wild animals, is risky,” Dr Amir Khalil, veterinarian and head of the mission with non-profit Four Paws, told VICE World News in an email. The group was selected to carry out the transfer and has been preparing for two months. “This includes extensive training of Kaavan so he will stay calm in his transport crate for the entire trip,” Khalil added, calling the operation “extremely tricky.”

Khalil has spent almost every day over the past few weeks with Kaavan, and has even been singing Frank Sinatra songs to him as a soothing technique. “This may seem absurd to outsiders, but it allowed me to build a close relationship with the elephant. Now he is ready to work with his trainer. As his personal physician, I will not leave Kaavan's side during his entire journey.”

But elephant transfers by plane pose bigger problems than relocating other kinds of species, and are usually done when the animals are smaller. This is also the first mission of its kind for Four Paws despite working under challenging conditions in Syria, Gaza and Sudan.

Experts from the group first flew to the country in August and September, assessed Kaavan and determined he was fit to fly. But he needed to undergo a special regimen to prepare him for the long journey, which involves remaining in a crate for hours. The training is now carried out three times a day, with Kaavan entering the crate on his own, becoming desensitized to the experience, and leaving. Some complications have arisen as Kaavan unexpectedly entered his musth season, a hormonal cycle accompanied by jumps in testosterone levels. Before boarding the plane, he will need to be sedated to attach one forefoot and two hind legs to fix his position in the transport crate. But once takeoff happens he must be alert for balance. 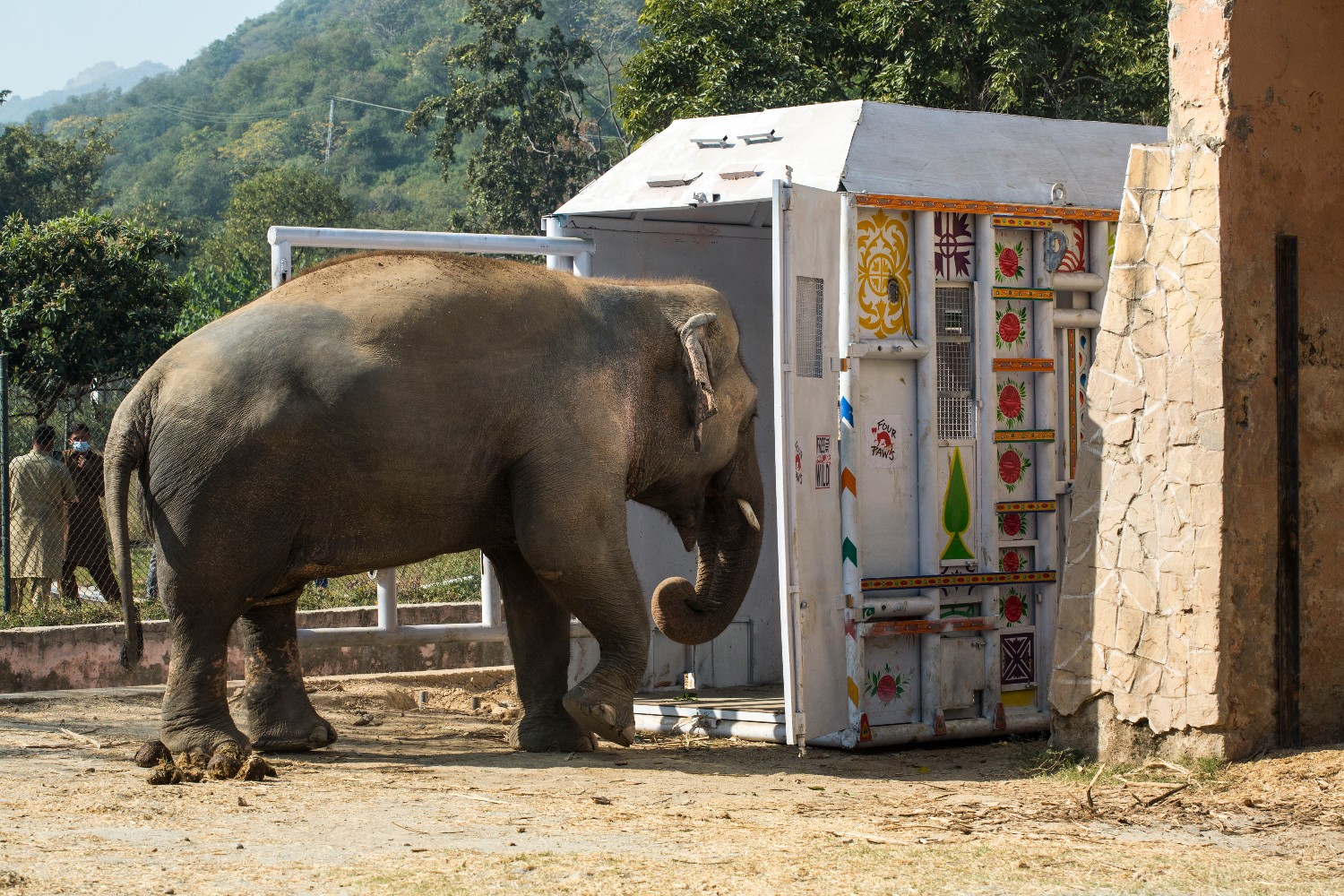 “Kaavan will be fully awake during the entire trip and will be fully aware of his surroundings also to balance himself while the crate is moving,” Ingo Schmidinger, Four Paws elephant curator, said. Wildlife experts and veterinarians on the plane will have additional sedatives in case Kaavan gets agitated during the seven-hour flight. 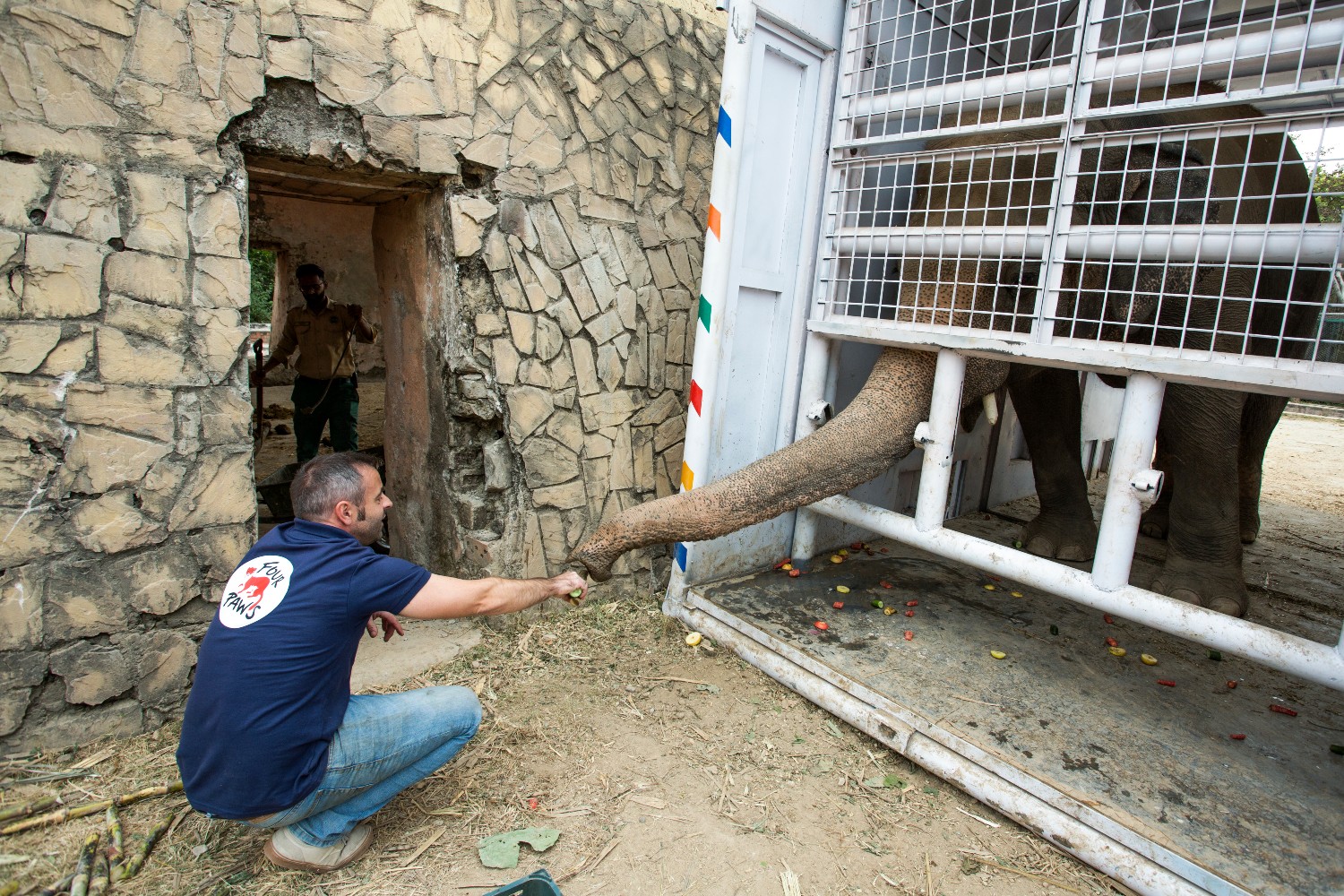 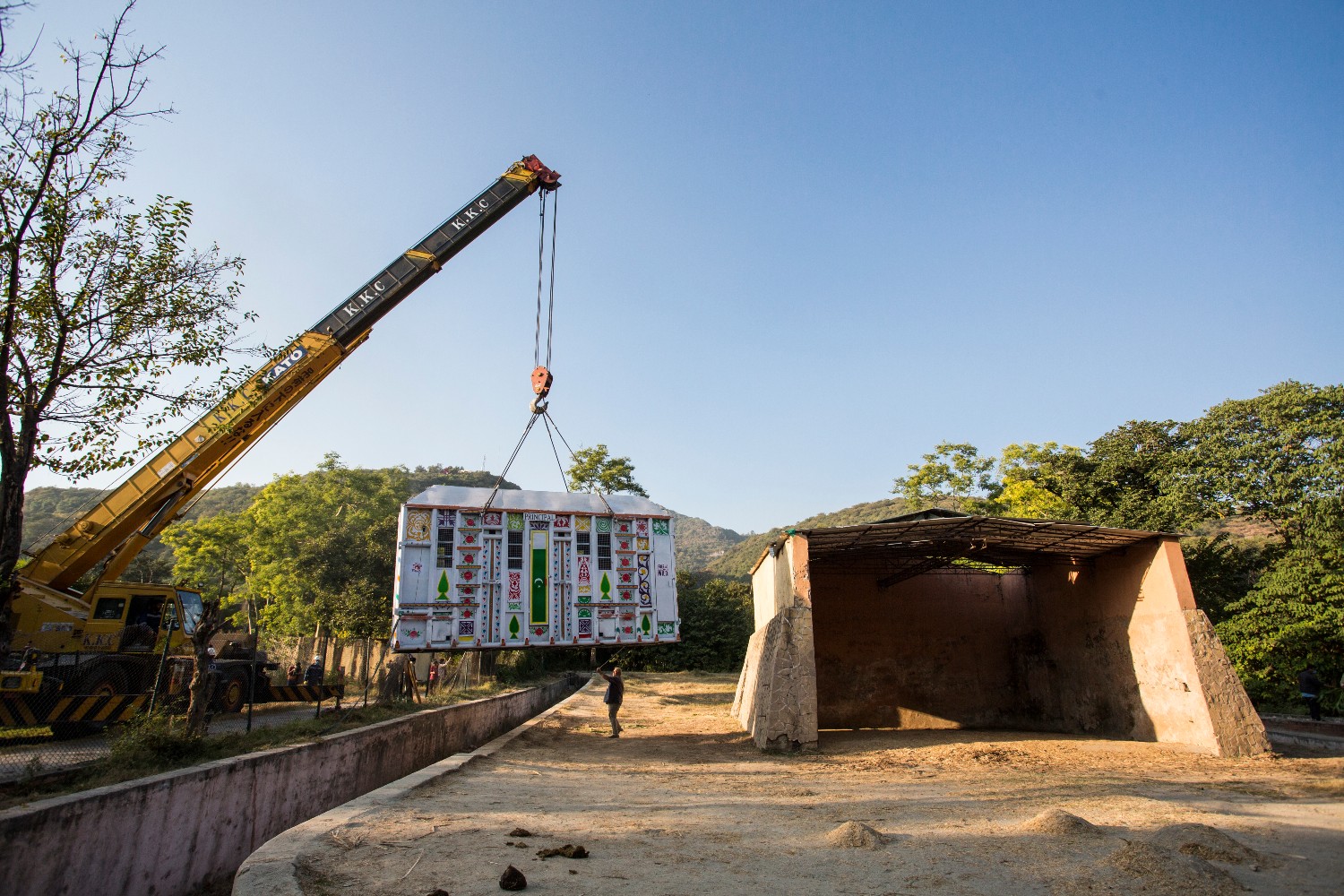 The practice transport crate being lifted by a crane. Kaavan is nearby but not inside. Photo: Four Paws / Hristo Vladev

If all goes according to plan, the Ilyushin IL-76 plane will leave on Nov. 29 with its special cargo. Once arriving in Cambodia, Kaavan will be transferred to a quarantine enclosure before ultimately being sent to the sanctuary. The high-wire act may seem nerve-shattering, but Khalil also sees inspiration in the global attention surrounding Kaavan’s plight during a year of crushing pandemic news.

“Kaavan has also become a symbol and unfortunately an example of the way humans treat wild animals. Kaavan’s rescue is also a sign of hope, especially in this difficult year,” he said. 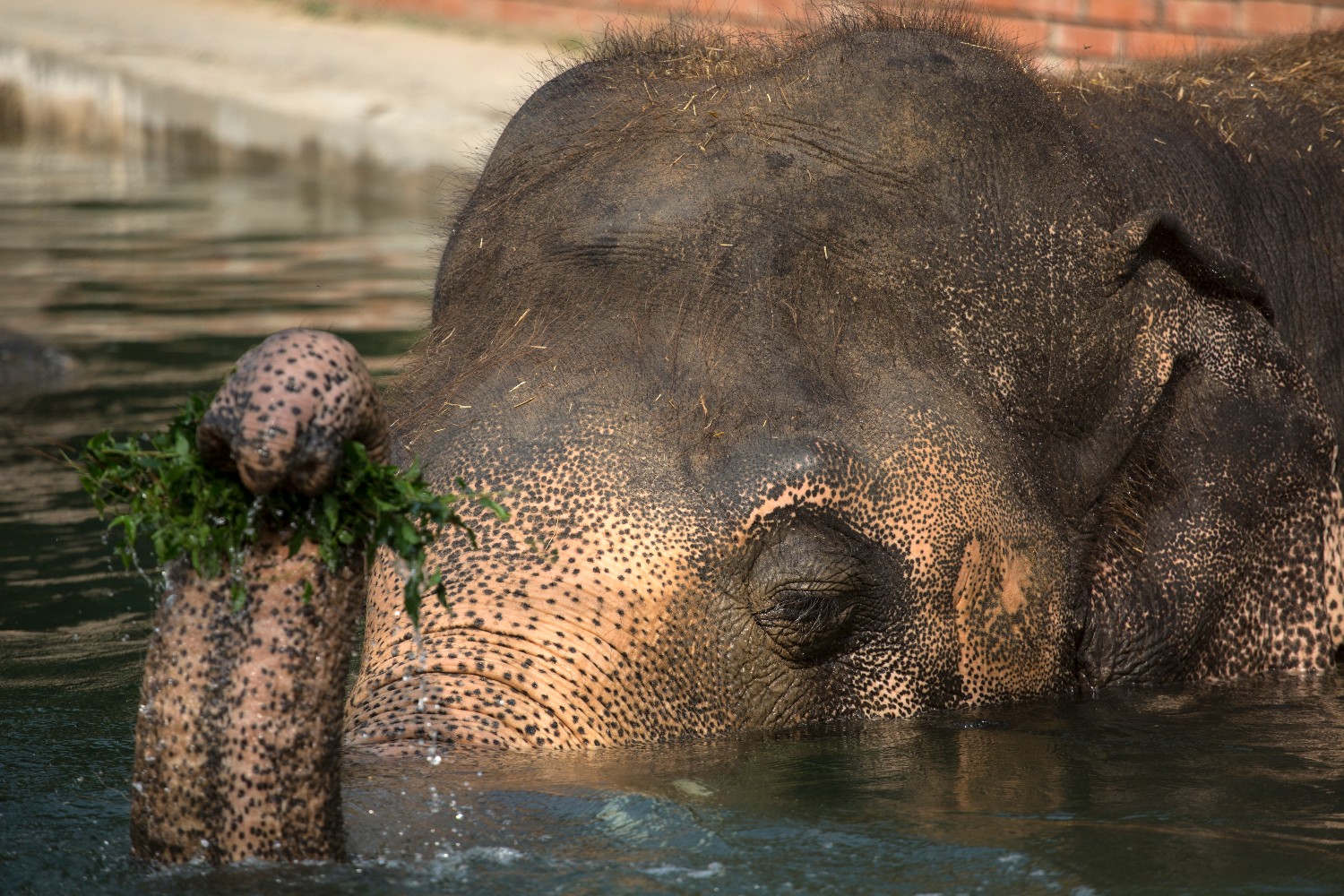