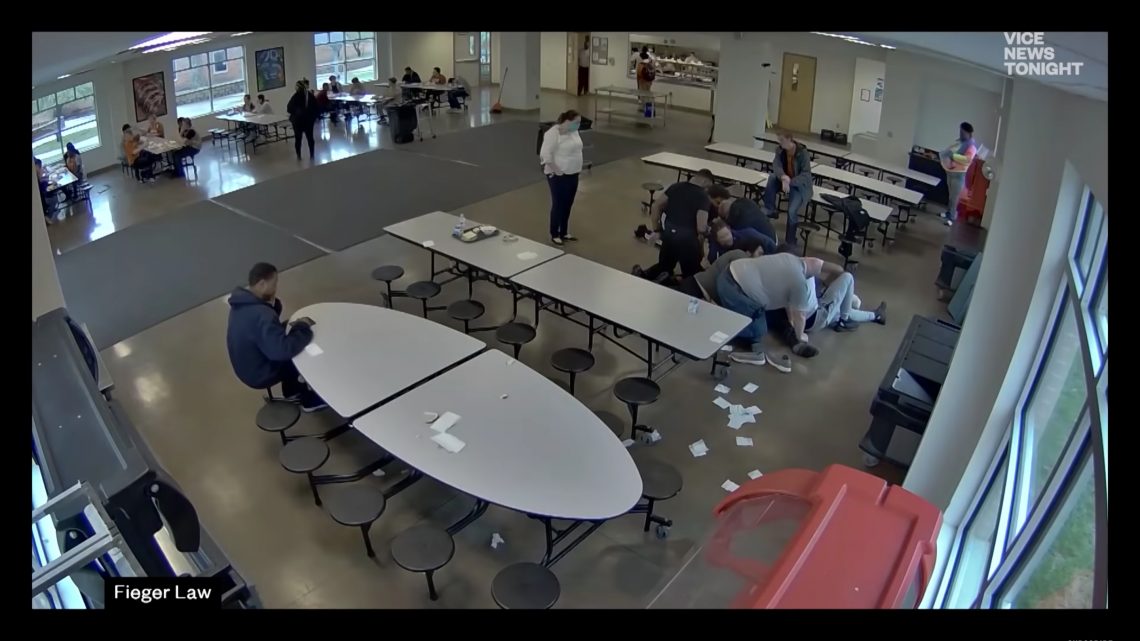 And they sometimes go horribly wrong. At least 20 children have died as a result of restraints since 2001, according to press clippings and Government Accountability Office reports identified by VICE News. They range from a 7-year-old girl who was restrained multiple times in a mental health clinic; a 15-year-old boy with autism who was pinned by four employees to the ground for over an hour; and a 17-year-old who died in a church-run treatment center after she choked in a restraint.

In 2012, the Department of Education published guiding principles for the use of all types of physical restraint: they are supposed to be emergency safety interventions, and used only when a child puts themself or someone else in imminent danger. But it’s hard to tell whether this guidance is being followed. There is no comprehensive data on how often physical restraints occur or what prompts them. Nor does the government track how many children are injured or killed in restraints.

Cornelius Fredrick was the latest. On May 1, the 16-year-old asphyxiated and died two days after he’d been placed in an on-the-ground “supine” restraining hold at the Minnesota residential facility for foster kids and juvenile offenders where he lived. Fredrick was restrained after throwing a sandwich in the cafeteria. A prior VICE News investigation interviewed 19 former staff and students at the facility, Lakeside Academy, who said restraints were used commonly to punish small infractions and keep order on campus.

In theory, restraints are a tool to make campuses more safe. They were developed as a more “humane” alternative to handling physical aggression, replacing “even more drastic things, for instance, lobotomies or institutionalizing people for life,” says Kim Sanders, executive vice president at Grafton Integrated Health Network, a behavioral health organization that advocates for alternatives to restraint. In a physical restraint, adults restrict the movement of a child until they’ve calmed down.

A long list of companies sell training for youth facilities in how to restrain properly. These so-called “crisis intervention” systems provide strategies for de-escalation, as well as precise restraint choreography that they say is anatomically safe. But even these programs acknowledge an inherent risk in the methods, for both children and the adults who perform them.

“We know any emergency safety physical intervention has the potential to cause injury,” says the Safe Crisis Management (SCM), the crisis intervention program used by the facility where Cornelius Fredrick died, in a training manual reviewed by VICE News.

Specific restraints entail specific risks. Per the SCM training manual, staff should monitor a child who is in a “prone” restraint—face-down on the ground—for decreased circulation and head banging. If they’re in a “supine” restraint—face-up on the ground—staff monitor the child for asphyxiation due to vomiting. Seated restraints carry risks of back or neck injuries. All restraints carry risks of restricted breathing, cardiac, and/or respiratory arrest; musculoskeletal injuries; and self-harm, per the manual.

Jaquil Short is a former youth counselor at Lakeside who was trained in SCM. “I didn’t think the risk [of restraints] was death until it happened,” he said, referring to Fredrick. “If I would’ve known that before, I wouldn't have done restraints.”

How anatomically dangerous a restraint is depends in large part on how long it lasts. Fredrick’s restraint lasted 12 minutes, two minutes longer than SCM’s limit. Since Fredrick’s death, Michigan announced it would end restraint in licensed child-caring institutions. Outside Michigan, state laws are a patchwork and there is no federal law limiting the use of restraints.

Guy Stephens’ son has autism and was restrained and secluded multiple times in school. The restraints were deeply traumatic, says Stephens, and heightened his son’s anxiety. He had to be taken out of school to recover. The experience prompted Stephens to found an advocacy group, the Alliance Against Seclusion and Restraint.

One of the group’s main goals has been to push for better data collection and tracking of restraints. But despite the data gaps, Stephens says it’s clear who is being restrained most often: “Disabled children, racial minorities, and children with trauma backgrounds who are likely to have a ‘fight or flight’ physical reaction when they are upset or triggered.”

“There continues to be no evidence that using restraint or seclusion is effective in reducing the occurrence of the problem behaviors that frequently precipitate the use of such techniques,” wrote Arne Duncan, then the U.S. secretary of education, in the department’s 2012 guidance for schools.

Nonetheless, almost 60,000 restraints were reportedly carried out on the nation’s school children in the 2015-16 year, the last year for which data was published. Many more were never reported. Restraints continue partly because some teachers, schools, and parents believe that there are no realistic alternatives.

Jason and Gretchen Mann are the parents of an 11-year-old with autism in Illinois. They sometimes resort to restraints at home, and support their use by trained instructors at their son’s school. They argue that efforts to reduce the use of restraint are a step in the right direction — but also that the tools shouldn’t be banned outright, because they help some students.

“In the special needs community, I'm not gonna say it's beneficial. I'm saying you have to have this to keep children and staff safe,” said Jason Mann. “Do I want my child to be restrained and put into an isolated timeout room? No, absolutely not. But if it's putting him in an isolated time-out room so he can self-regulate and calm down versus a teacher or another student having a tooth knocked out or damages to the school property, then so be it. It’s a very tough position to be in.”

The Housing Bubble is Even Bigger Than the Stock Market Bubble