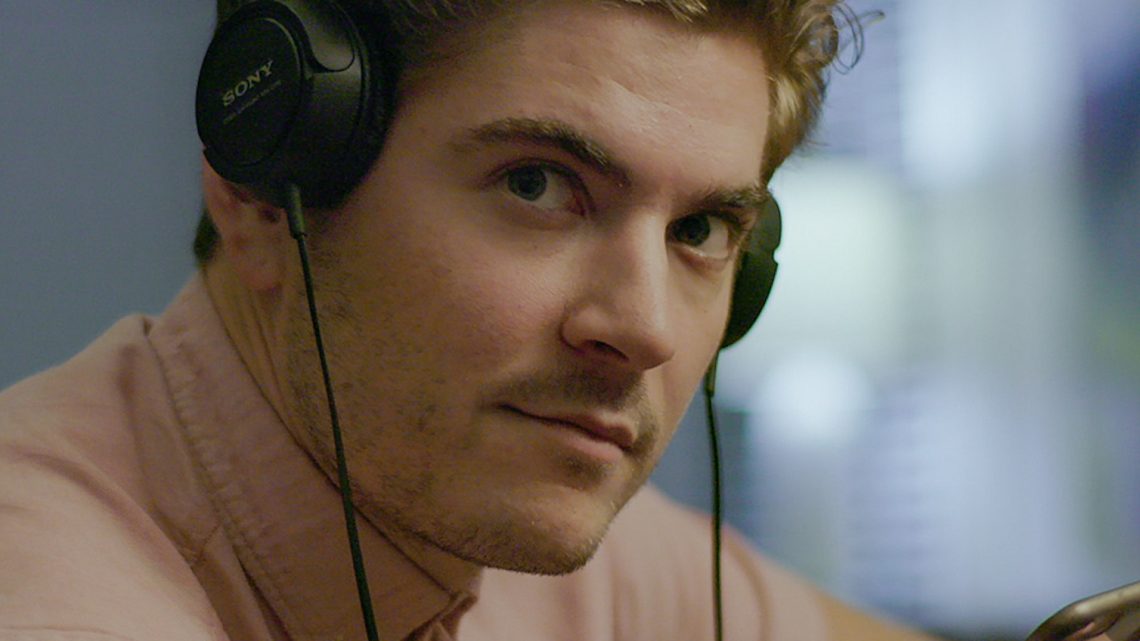 When Madison Hamburg's mother was murdered in March 2010, he wasn't capable of processing what had happened. At 18 years old, he was addicted to opiates, making an unthinkable tragedy even harder to deal with.

"I didn't choose to face my life without her immediately," Hamburg told VICE. "I turned to drugs to run from it."

He spent the aftermath of her killing self-medicating, drifting in and out of a drug-induced haze until, in August of 2010, he went to rehab. When he got out, he found himself terrified by the thought of losing his mother's memory. He did whatever he could to hold onto it; he'd often call his mom's phone just to hear her speak when, inevitably, it went to voicemail.

After taking a year off of school, he re-enrolled at the Savannah College of Art and Design. That's where Murder on Middle Beach—a four-part HBO docuseries in which Hamburg investigates his mother's unsolved murder, which premieres on Sunday—was born. It began as a class project, one Hamburg thought might help "immortalize" his mother. He flew up to Madison, Connecticut, where Barbara Hamburg was killed, to interview his family members and meet with the police, collecting footage that would make its way into Murder on Middle Beach years later—but at the time, he couldn't manage to compile it all into a finished film.

"We turned in a trailer," Hamburg told VICE. "My professor gave us an A, but with the condition that I never stop working on the project."

Hamburg held up his end of the bargain, returning to Madison in 2016 to continue work on the documentary. He began to learn about the circumstances of his mother's death in depth. She had suffered blunt force trauma to the head and was stabbed repeatedly outside her home on the morning of March 3, 2010. Her killer dragged her body across the yard and covered it with cushions, pulled from the family's lawn furniture.

The police never identified her murderer, and they haven't publicly discussed a possible motive. The only suspect they named was Jeffrey Hamburg, Madison's father. He allegedly owed his ex-wife nearly $500,000 in alimony and child support at the time. On the morning she was killed, she was supposed to be in court, negotiating that debt with him and his attorney. He was never charged in connection to her death.

Much of Murder on Middle Beach is dedicated to trying to identify who might have killed Barbara Hamburg, but it's far from a standard true-crime thriller. Instead of focusing solely on the grim details of his mother's killing, Hamburg paints a tender, nuanced portrait of who she was, and how her death affected him, his sister Ali, and the rest of his family. He interviews his grandmother, aunts, uncles, cousins, and his father, not just about what happened on March 3, but about the way their lives have changed since Barbara Hamburg died. Murder on Middle Beach is a study in how tragedy impacts a family, and the unique breed of grief, trauma, and mistrust that an unsolved murder leaves in its wake.

VICE spoke with Hamburg about the years-long process of making Murder on Middle Beach, and the mental and emotional toll chronicling his own mother's murder took on him.

VICE: As much as Murder on Middle Beach is about trying to solve a mystery, it's also about family dynamics, trust, coping with trauma, and the line between healthy and unhealthy grieving. Was it hard to get studios to buy into your vision for this?
Madison Hamburg: It was a really difficult process, because I had set out to subvert true-crime conventions and expectations. I didn't want to focus on the brutality of the crime or the potential killers, but rather the characters and human stories and grief and loss—ultimately, to tell a story about identity. And that's not what executives always want to hear. The question we got a lot was, "Are you gonna solve it? Do you know who did it? Who do you think did it?" And it's like, That's not what this story is about. We eventually pitched to Lisa Heller at HBO, who saw the potential of this to be a different kind of story, in sort of subverting the conventions. And they gave us an offer.

In the documentary, many of your family members essentially become suspects, to varying degrees. You ask some of them, point blank, if they killed your mom. What was it like to hold these people who are extremely close to you in suspicion?
I myself, personally, never held them in suspicion. But it was incredibly difficult to navigate the aspersions that were being cast between my family members. I think it's a really human need to have an answer to something as egregious as what happened to my mom. My goal was to ask those hard questions, and address that sort of elephant in the room between my family so that we could exonerate them and move past that lingering distrust that was created from the unsolved nature of my mom's death.

At one point in the series, you talk about how hard you're pushing your family members, and how you worry about the trauma they may experience because of that. You talk about how you don't want to hurt them. How difficult was it to wrestle with that?
It's terrifying and tragic that I felt like I had to [push them that hard]. We watched all four episodes together, my family, and we talked through it. For some of them, it took a couple of days to sort of work through their image. You never know how someone's going to react to how they look on camera. Especially in 2019, when we were piecing everything together in the edit, I was constantly thinking about that: How is Ali going to take this? How is Conway [Beach, Barbara's sister] going to take this? Watching it with them was really difficult. But ultimately, I think that they see the sort of greater good and are okay with the sacrifices of privacy.

Late in the series, there's a scene in which you talk about how you've "blocked out" your emotions, in some ways, over the course of making this documentary. You talk about how, sometimes, your mother feels more like a "character in a story" than a real person to you. I imagine that was somewhat of a necessity, creating that emotional distance. But in what ways were those feelings troubling?
Doing something like this, sometimes it felt really cathartic, and sometimes it felt really troubling. When everything happened and I came home, I didn't see my mom's body. Nobody told me the details about the crime. So working through it and understanding at least the logistics of how it might have happened, after getting through that initial emotional response, it created some finality for me for her death. And uncovering who she was really allowed me to grieve her death.

This is a documentary about your family, about your mother, about her murder—but it's also, to a large degree, about you. Were you at all worried about making this too much about yourself? And was it difficult to figure out exactly how much of you you wanted it to be about?
One question I kept asking myself—and it was a gauge we were checking—was, "Is my life driving the documentary, and my choices? Or is the documentary driving my choices and my life? And if so, to what effect: Is it for added drama? Is it because we need an ending?" So that was definitely something I was struggling with. One of my biggest fears is it feeling exploitive, or opportunistic. I never really, fully felt that way. But I know that there's definitely the potential for people to be like, "Oh, great. You took advantage of your mom dying for your own success," or whatever. It was important for me to have collaborators who weren't as subjective to be a gauge for, like, cringeworthiness.

Did it feel empowering to transform the trauma connected to your mother's death into an accomplishment—into the tangible thing that is this documentary? Did it feel like you were reclaiming power over what happened in a way that was healing?
It was very healing. I've created new memories on days that have been really, really difficult for me: On March 3, holding a memorial [for my mom], or on Mother's Day, going to my grandmother's farm and watching eight-millimeter and 16-millimeter old film reels of my mom as a child. Now, on those days, I can feel not just the absence of my mom, but the presence of these new memories. And I can actually look at it on HBO. My grandmother is not going to be around forever. And the fact that I can sit down and see this incredibly poignant moment of her talking about grief being a personal and unique thing, on her porch—that moment is a moment in my life that I'm going to cherish, and the fact that I can share it, and look back to it, is very rewarding.

There are a few moments in the series when people close to you encourage you to drop your investigation, abandon the documentary, and move on with your life. Have you ever felt like you just wanted to let it all go—and what's kept you from doing that?
First of all, anyone saying that to me only motivates me to push harder. But there were moments where I was really concerned with the possible destruction that releasing the series could cause. There were moments of weakness where I was really worried that I was going to create something that would only hurt people. And I was very vocal about it. It was really important for me to have my best friend and my producer along with me this entire time. He's someone who cares about me deeply as just a friend; he's like a brother. In those moments of weakness [when I wanted to abandon the documentary], he was the one that got me out.

So this is finally coming out on Sunday. Is that a cathartic feeling for you?
I feel like when I release this documentary, it's going to make me whole again. I think I was prematurely grieving the end of an eight-year-long process that I've just poured everything into. It'll never be perfect, and it'll never be done, but eventually, you just stop working on it. You gotta let it go, and let it be what it's destined to be.

The documentary ends with an element of finality, but it's also clear that there's more work left to do in terms of identifying your mother's killer. Are you continuing to look into this case?
I'll never stop. This has become my passion. Eight years of trying to piece together fragments of faded memories around March 3 and around who my mom was, and then being given—in sometimes exact clarity—certain details, it's like crack. I've been totally immersed. And now the process is kind of restarting again. I'm just working on it nonstop. We do have a tip line, barbarahamburgtips.com, for the family and for the film. It's to share memories about my mom and also memories about that period of time. And any small details may be extremely beneficial.

So the digging you've been doing for so long is continuing.
Yeah. It's too early to say how that will be manifested, and what the end product will be. But I'm not gonna stop.

The above conversation has been edited and condensed for clarity.