But days after President Trump lost the Electoral College, and the popular vote by more than 4 million, the mood in Lansing was decidedly downbeat. Members of the MAGA movement, waving flags and praying over rosaries, seemed to be caught between stages of grief, clutching at conspiracies to try and make sense of his disappointing performance.

Families wearing their Sunday best were there, having just come from church  and holding statues of Jesus. Two women held a sign that read BLM: (B)iden’s (L)aptop (M)atters).” One wore a t-shirt saying “Defund the Media.” Others spoke on megaphones, attempting to drown out the persistent drum-beating from counterprotesters stationed in the middle of the steps, blasting YG and Nipsey Hussle’s song “Fuck Donald Trump.”

On occasion, verbal disputes broke out, but nothing escalated to physical violence. 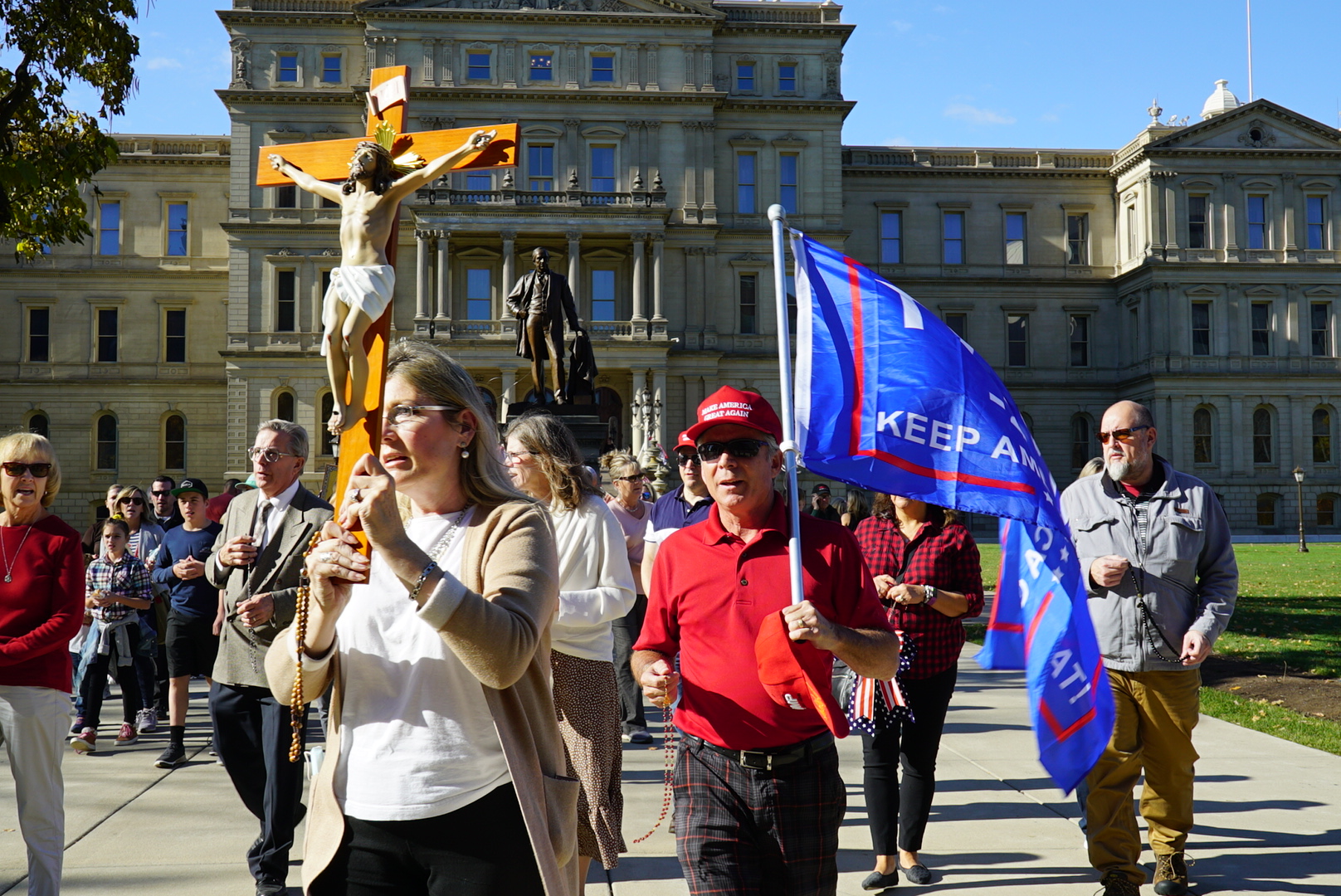 Protesters outside of the statehouse in Lansing, Michigan, holding a Trump flag and Jesus on the cross on Sunday, Nov. 8, 2020..

Straka, a former liberal and hair stylist from New York City, was in Lansing to foment resistance against the idea of a Joe Biden presidency after the Trump campaign called on supporters Friday to “defend” Michigan. The president lost the state by more than 147,000 votes.

“It’s not over. I’m not a crazy person. I’m not a conspiracy theorist. I hate that shit. Let’s deal with the facts,” he added. “The media is playing games with your mind the way they always do.”

But Straka’s optimism wasn’t quite registering with the rest of the crowd. The dejected mood and small turnout on Sunday stood in stark contrast to the thousand or more supporters who had rallied defiantly the previous day, in some instances scuffling  with counterprotesters.

Michigan, long a bastion for anti-government extremism, emerged this year as a hub for anti-lockdown activism and conspiracies. Lansing became the backdrop to several armed protests, including one in which  armed militiamen swarmed the Capitol building. Some of those same protesters were later arrested for allegedly plotting to kidnap the Democratic governor, Gretchen Whitmer, as revenge for COVID-19 restrictions.

The president  has falsely claimed without evidence over the past few days that he actually won Michigan, and that his victory was usurped by voter fraud. He has zeroed in on Detroit in particular, insisting that the diverse, liberal-leaning city is one of the "most corrupt political places anywhere in our country.”

Messaging about fraud and conspiracies had trickled down into the audience in front of the capitol building on Sunday, but few protesters were able to give specifics.

Brian, 55, who declined to give his last name, said he felt like his vote had been stolen.

“It’s a big con job. The biggest farce in history. What happened in Detroit was not ok,” he said. “I’m ok if Biden wins. But it’s not over yet. In order for me to live comfortably, I have to see what the courts decide.”

Mike Pniewski, 51, who carried a Trump 2020 flag with the slogan ‘Fuck your Feelings,’ was also pinning his hopes on some kind of court ruling, though exactly whicih court was unclear. Asked what he would think if various judges concluded Biden had won fair and square, he replied, “I trust the courts, but if Biden is found to be the winner, that will be a lie.”

He didn’t, however, rule out the potential for violence as a means to address deep political divisions in the U.S.

“The way to fix the USA is to get the Deep State to stop pushing their agenda, pushing their socialist agenda, to make us into marxists and communists,” said Pniewski. “If it has to come to violence then it has to.”

Some rally goers had their hearts set on a recount, and said they were prepared to accept the results even if it affirmed that Trump lost. (There’s no recount scheduled for Michigan.)

“If Biden wins—truly wins—MAGA will stand down,” said Joseph Allison, 57, who was posted up in a camping chair he’d brought to the rally. “MAGA will stand down. We will walk. But we want the recount. That’s how our system works and that’s what needs to happen.”

Others were putting their faith in God to deliver the election results that they’d hoped for, and some prayed nearby.

“I’m a Christian. People are out here suffering and looking for solutions to the suffering, and I can tell you right now that the solution is not Joe Biden,” said Kristine Christlieb, 67.

Billie Rae, 32, said that he didn’t feel that Trump had lost yet. Rae said he voted for Obama in 2012, but then voted for Trump because he was anti-establishment.

Asked whether he felt Trump’s support-base had become cult-like, Rae responded with a question.

“If you say you like coffee and then go to Starbucks, isn’t that a cult? The media is skewing the story as usual.”