Facebook made a big deal of the policies it put in place to prevent candidates and campaigns from declaring victory prematurely.

But when it came time to implement them, they didn’t work.

With the outcome of the 2020 presidential election still very much in the balance, President Donald Trump announced on his Facebook page just after midnight on Wednesday morning, “We are up BIG, but they are trying to STEAL the Election. We will never let them do it. Votes cannot be cast after the Polls are closed!” 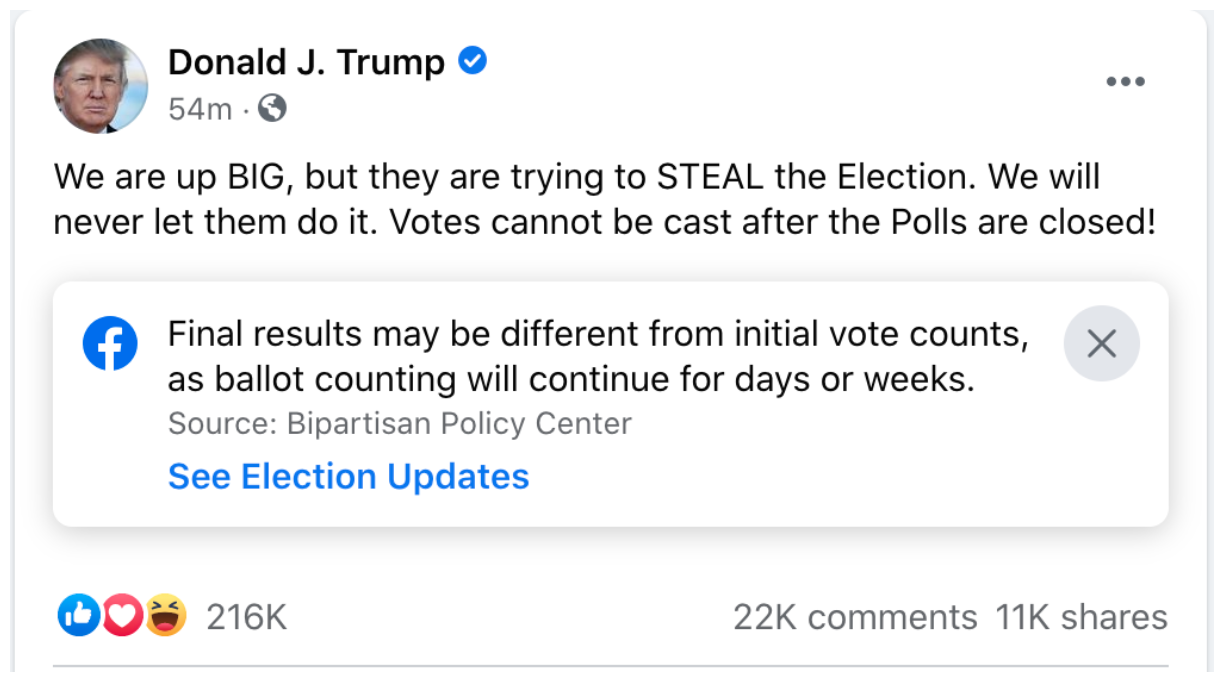 The language of Facebook’s label also did not explicitly say that Trump’s claims were inaccurate.

“Final results may be different from the initial vote counts, as ballot counting will continue for days or weeks,” the label read.

The label can also be dismissed — by pressing the “x” in the top-right-hand corner — and if the page is refreshed it does not reappear.

In a statement, Facebook said that “once President Trump began making premature claims of victory, we started running notifications on Facebook and Instagram that votes are still being counted and a winner is not projected. We're also automatically applying labels to both candidates’ posts with this information.”

Within minutes of Trump posting the same message on Twitter, it was placed behind a warning label saying that at least some of Trump’s comments were “disputed.” Twitter also blocked other users from retweeting, liking or commenting on the post.

Facebook attempted to get ahead of the controversy when it announced in early October the measures it would put in place to combat premature claims of victory. But in those plans it failed to mention a key caveat to its rules — that the rules did not cover state-level races..

The specifics of the policy were only revealed in a statement to the Wall Street Journal, after the official Team Trump campaign posted messages declaring premature victory in Florida, at a time when major media outlets were reporting that Trump was ahead in Florida but hadn’t declared a victory.

Facebook’s plan “is to address premature calls for the final result of the presidential race,” the company said. “For other posts we are applying labels directing people to them in the Voting Information Center where they can see what races have been called.”

But experts, including Alex Stamos, a former chief security officer at Facebook, said such a limited policy was effectively pointless.

“A policy that doesn't apply to individual states is not very useful in a contest that might come down to one state,” Stamos told the Wall Street Journal.