In a small portside tourist town on North Korea’s east coast, just 11 miles from the demilitarized zone at the South Korean border, sits a hulking, derelict vessel once known as the Barrier Reef Floating Resort.

In the late-80s, this seven-storey structure—fitted with nearly 200 rooms as well as a nightclub, a helipad and a tennis court—was spruiked as the world’s first floating hotel, offering guests the chance to spend several luxurious nights out on the waters of the Great Barrier Reef, about 40 miles off Australia’s northeastern coast.

Now it sits abandoned and destitute more than 4,000 miles north: a 12,000-tonne wreck that was towed from Australia to North Korea, where it has sat for the past decade. Kim Jong-Un recently denounced the structure as “shabby”, and ordered its removal. But there are many who still have fond memories of the floating hotel: first as a five-star party hotspot, then as an ill-fated tourist attraction, and finally as an improbable symbol of diplomatic relations between North and South Korea. 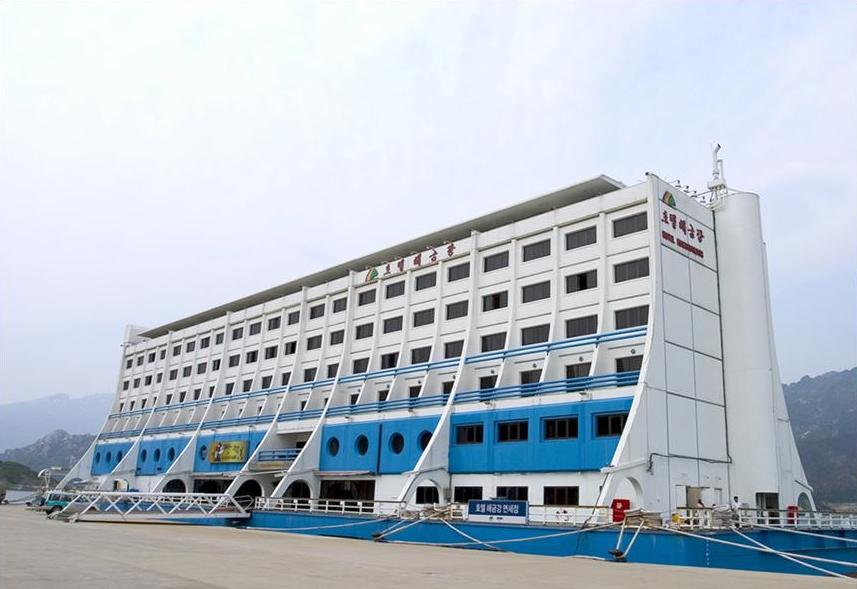 Amid the compounding difficulties of global nuclear tension and a raging pandemic, the floating hotel’s future has perhaps never been so uncertain.

"I remember so many amazing days living on the hotel,” Belinda O'Connor, who worked as a water taxi driver during the Barrier Reef Floating Resort’s Australian tenure, told the ABC in 2018. “Fishing trips, crew parties, diving under the hotel, having pizzas flown out by chopper … It was an impressive sight.” 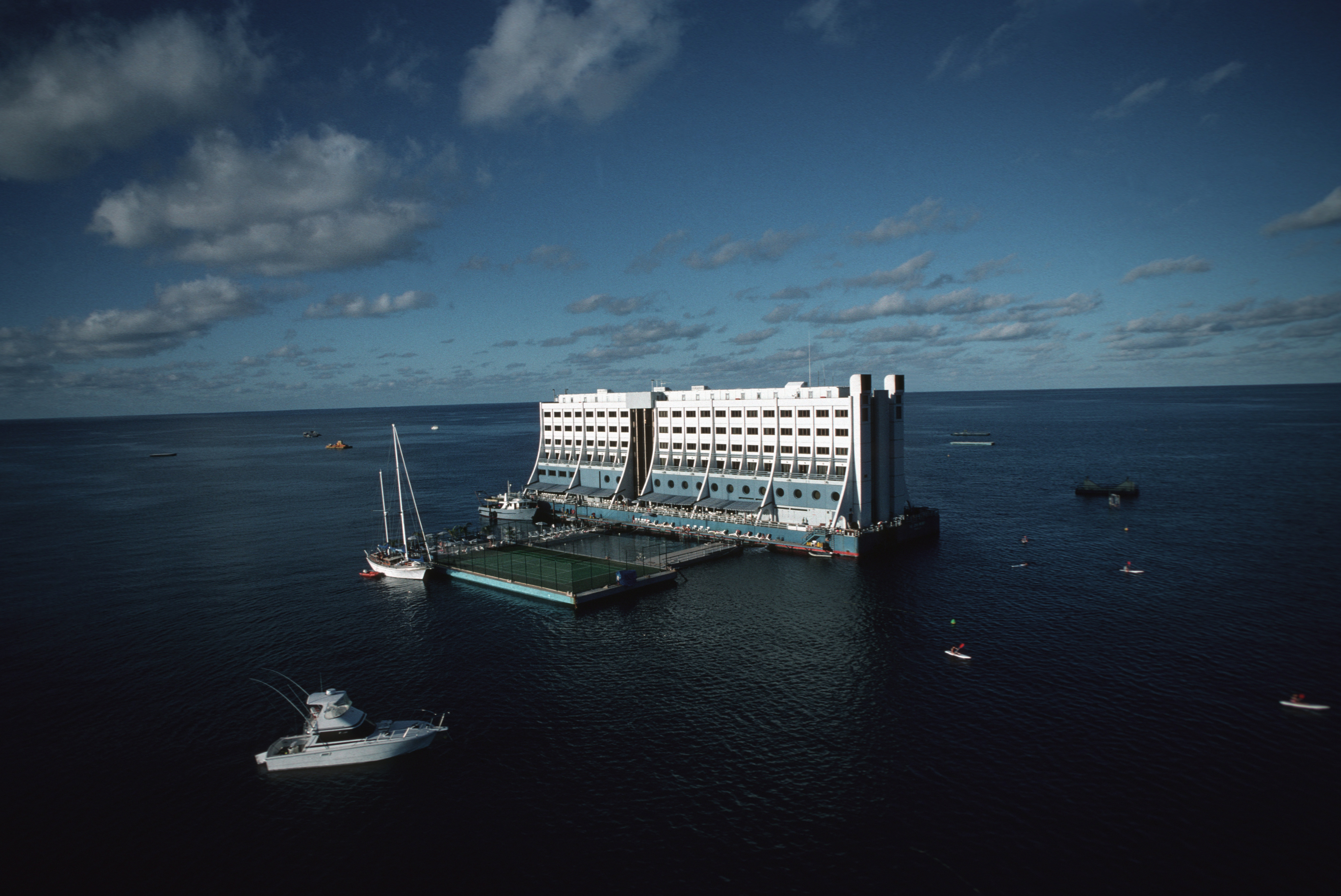 The seven-storey structure was fitted with nearly 200 rooms as well as a nightclub, a helipad and a tennis court. Photo by Peter Charlesworth / LightRocket via Getty Images

"It was pretty amazing to see the hotel floating on the reef, with that beautiful blue water background right behind it," Peter Tarca, whose father designed the structure, agreed. "From a distance it just kind of looked like another ship. But as you got closer and closer, clearly you'd see it was a different kind of structure.”

The Barrier Reef Floating Resort opened in 1988, but was beleaguered by several years of acutely bad weather and frequently wracked by cyclones. Visitor numbers steadily dropped—and by the end of 1989 the floating hotel had been towed 3,400 miles northwest, to its second home on the Saigon River in Ho Chi Minh City, Vietnam. Renamed the Saigon Floating Hotel—or “The Floater”, among locals—the one-of-a-kind structure rode the wave of Vietnam’s post-war tourism boom and became a popular accommodation venue until, eventually, it once again ran into financial difficulties and was sold to a new buyer.

At the turn of the millennium, during a period of relative peace and reconciliation between North and South Korea, the floating hotel was relocated to its current resting place of Mount Kumgang Port, 130 miles east of Pyongyang. 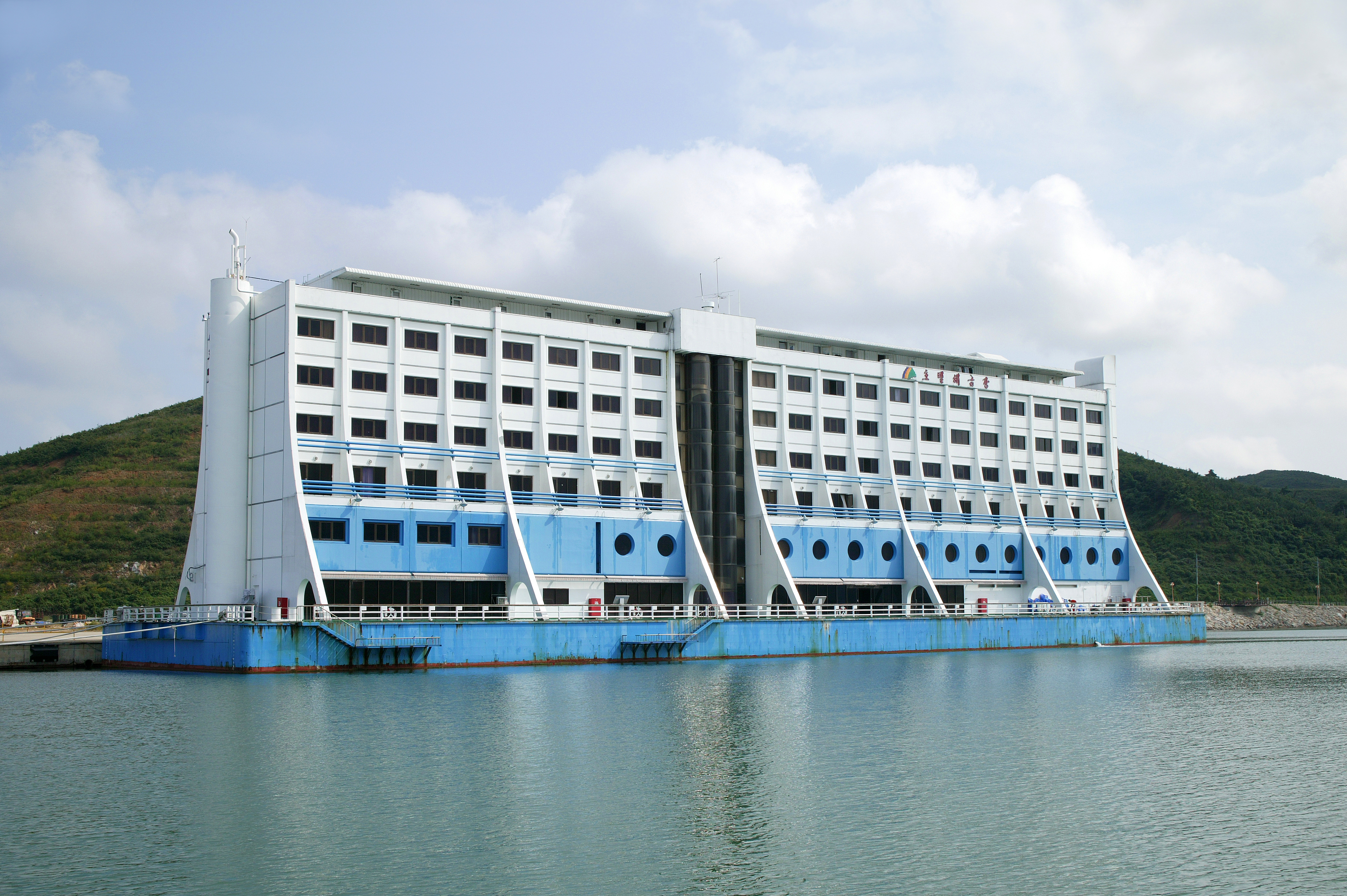 In the early-2000s the structure, renamed Hotel Haegumgang, became an improbable symbol of diplomatic relations between North and South Korea. Image courtesy of Hyundai Asan 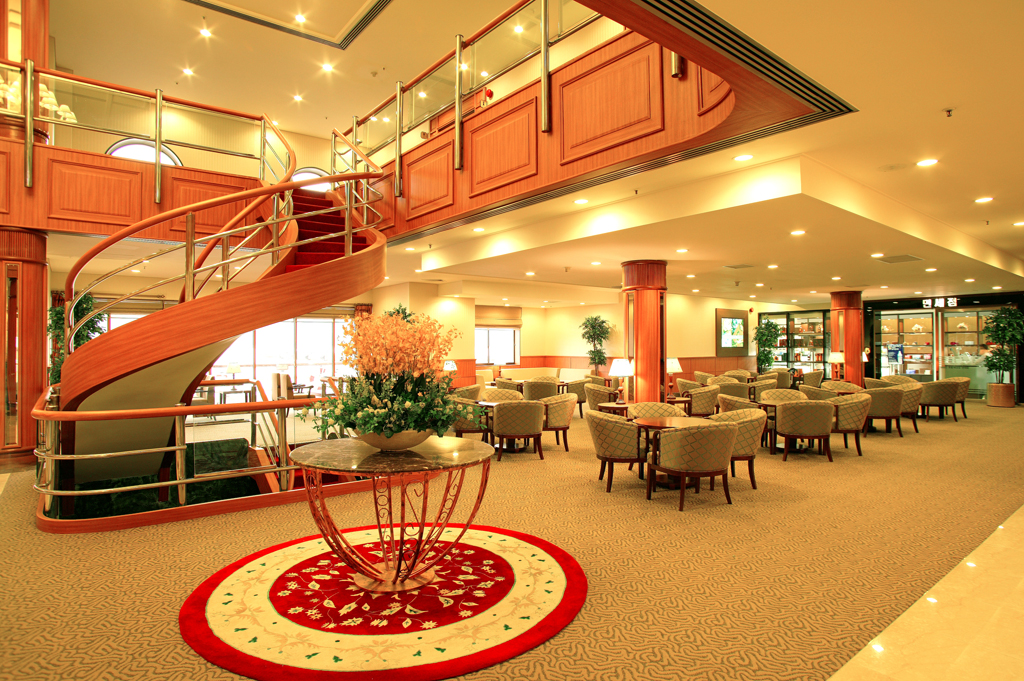 A rare view inside the floating hotel. The ship looks in pretty good condition but these photos were taken several years ago. Image courtesy of Hyundai Asan

"Apparently it was transferred to North Korea, when there was a time in the history of the two Koreas of appeasement and thawing of relations," Robert De Jong, from the Townsville Maritime Museum, told the ABC. "It was thought that the hotel in North Korea could be suitable for attracting tourists.”

The floating hotel became an iconic fixture of Mount Kumgang’s tourist resort, which was developed in the 90s by a handful of South Korean companies—including Hyundai Assan, who operated tours in the area. Renamed Hotel Haegumgang, the vessel was frequently used to accommodate tourists from south of the border until, in 2008, a North Korean guard shot dead a South Korean tourist who had reportedly wandered into a military area.

Tours to Mount Kumgang were subsequently suspended—and since then, relations between the two countries have only become frostier. 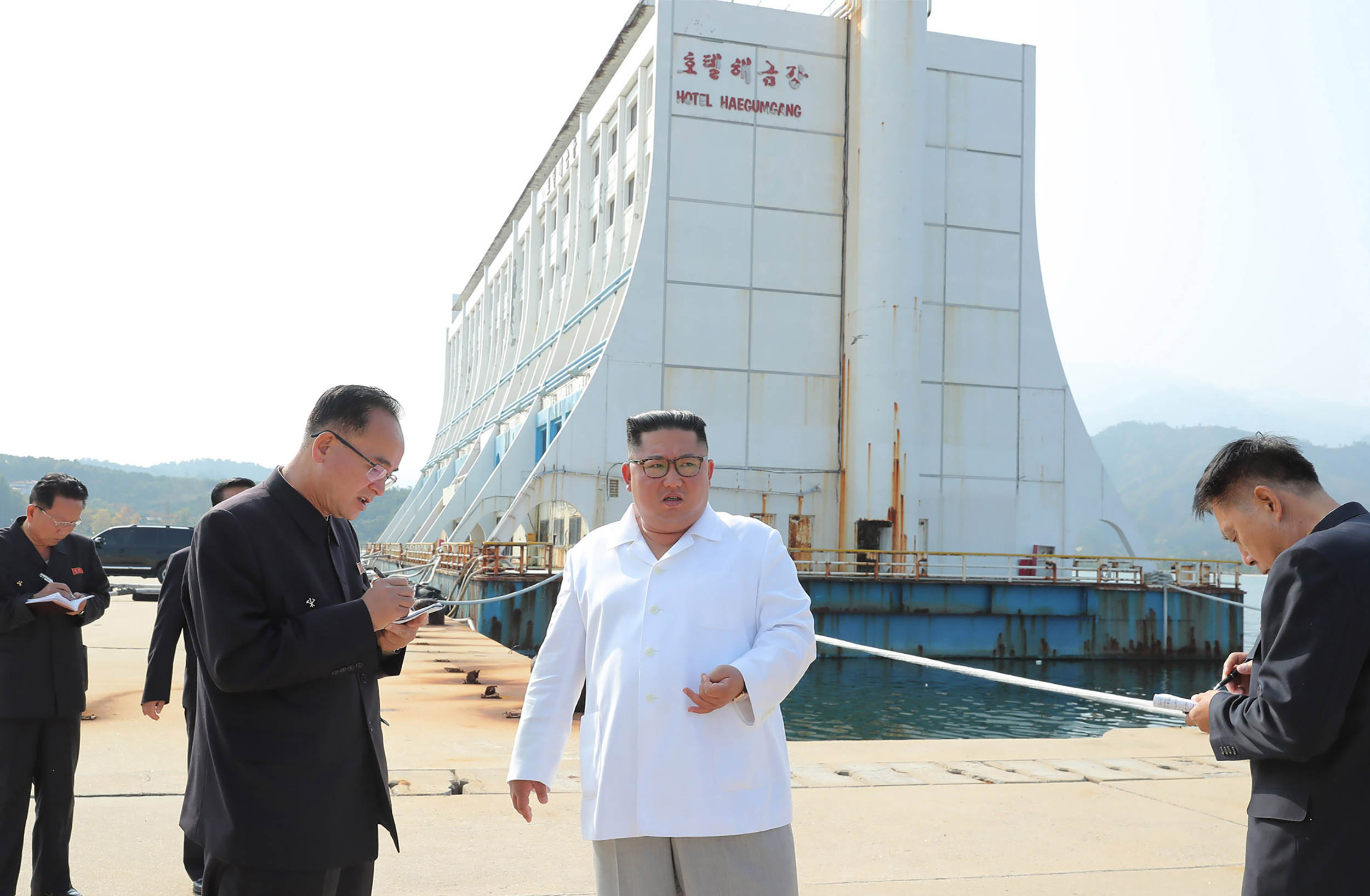 Kim Jong-Un recently denounced the structure as “shabby”, and ordered its removal.

Kim Ha-young, a spokesman for the Hyundai Asan, told VICE News that while there had been previously been discussions between the North and the South regarding the future of tourism in Mt Kumgang, those conversations ceased altogether amid the COVID-19 outbreak—and “There has been nothing much going on between the two sides since then.”

Kim noted that, after the shooting incident in 2008, the floating hotel was mainly used by Chinese tourists. But on his most recent visit to Mt Kumgang in early 2019, he said, the vessel seemed to have been completely shuttered. 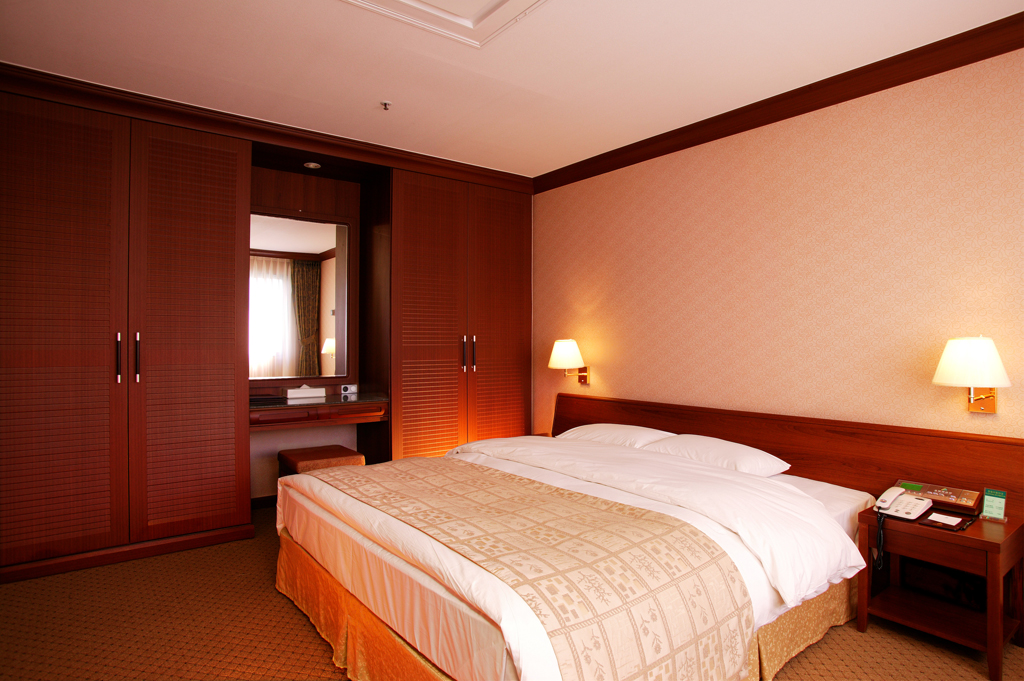 Inside one of the vessel's many rooms. Image courtesy of Hyundai Asan

“When we went to the North early last year, we inspected the hotel with the naked eye. At that time, they were not using the facilities … North Korea has stopped its operations since the floating hotel has aged.”

And so the Barrier Reef Floating Resort’s future remains shrouded in uncertainty. South Koreans are not permitted to keep in touch with North Koreans legally, and it's even difficult for the South Korean government to communicate with the North.

It’s also been more than a year since Kim Jong-Un ordered the destruction of the vessel, according to state media. One has to wonder: is it possible that the iconic floating hotel has been sunk or destroyed in the time since Kim Ha-young was last there? 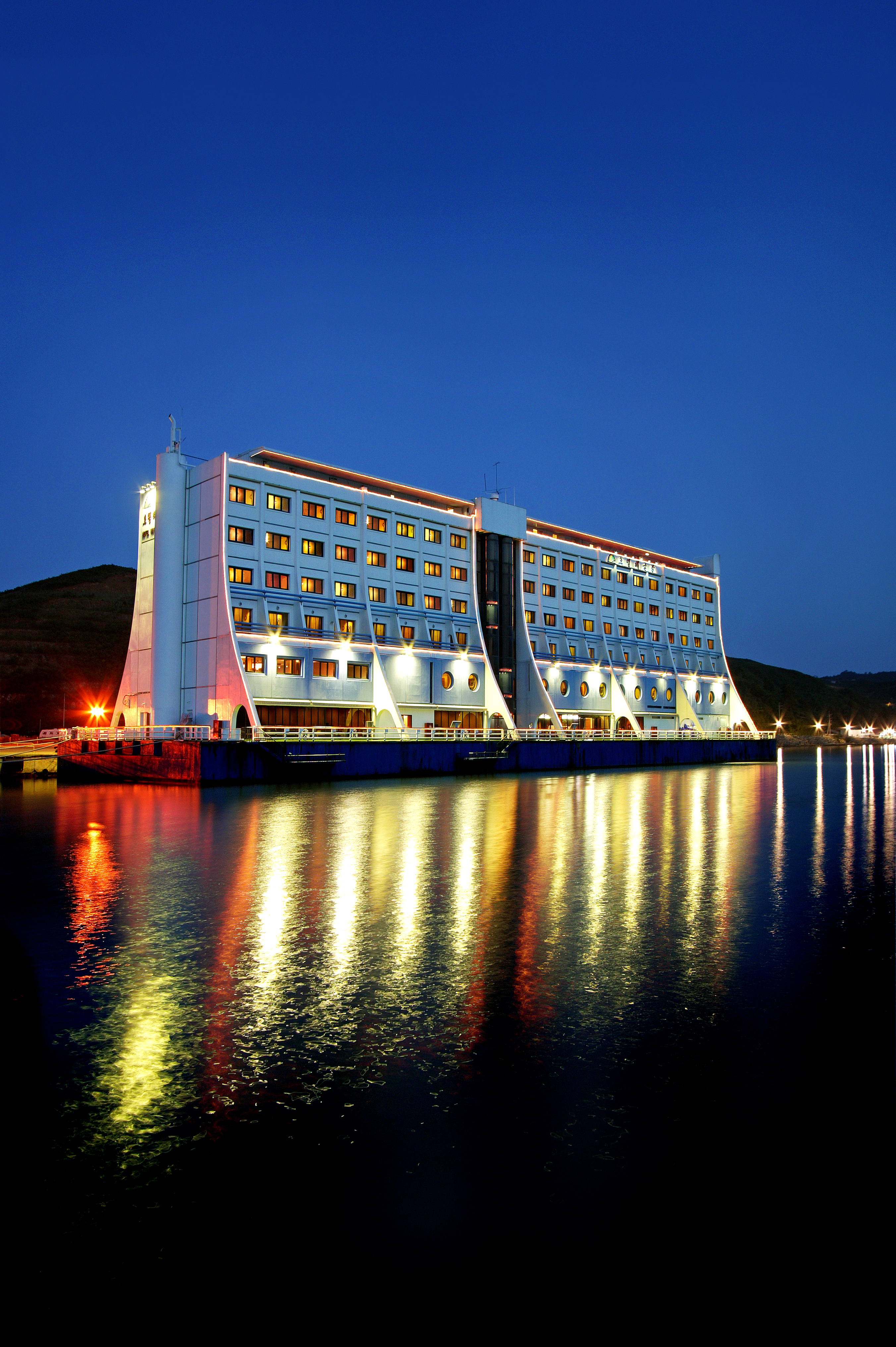