At time of writing, Tropical Storm Zeta will likely become a hurricane as it roars towards Mexico's Yucatan Peninsula, before potentially heading for the US Gulf Coast. What’s unique about this, however, isn’t the storm's ferocity, but its name. Zeta is a record breaker because it’s the earliest 27th named weather system in any hurricane season.

This year, the Atlantic Ocean has seen so many hurricanes that the US National Hurricane Center has run out of names. For the rest of the 2020 season, the center will use the Greek alphabet, and is already up to the sixth letter, Z, which it arrived at in record time.

However, there’s yet another unique aspect to this year’s hurricane season, which has been an increased number of data-collecting flights. With each new hurricane, meteorologists don’t just use satellites and on-ground equipment to make predictions of its danger. They also send plane-loads of equipment and extremely brave people into the clouds. 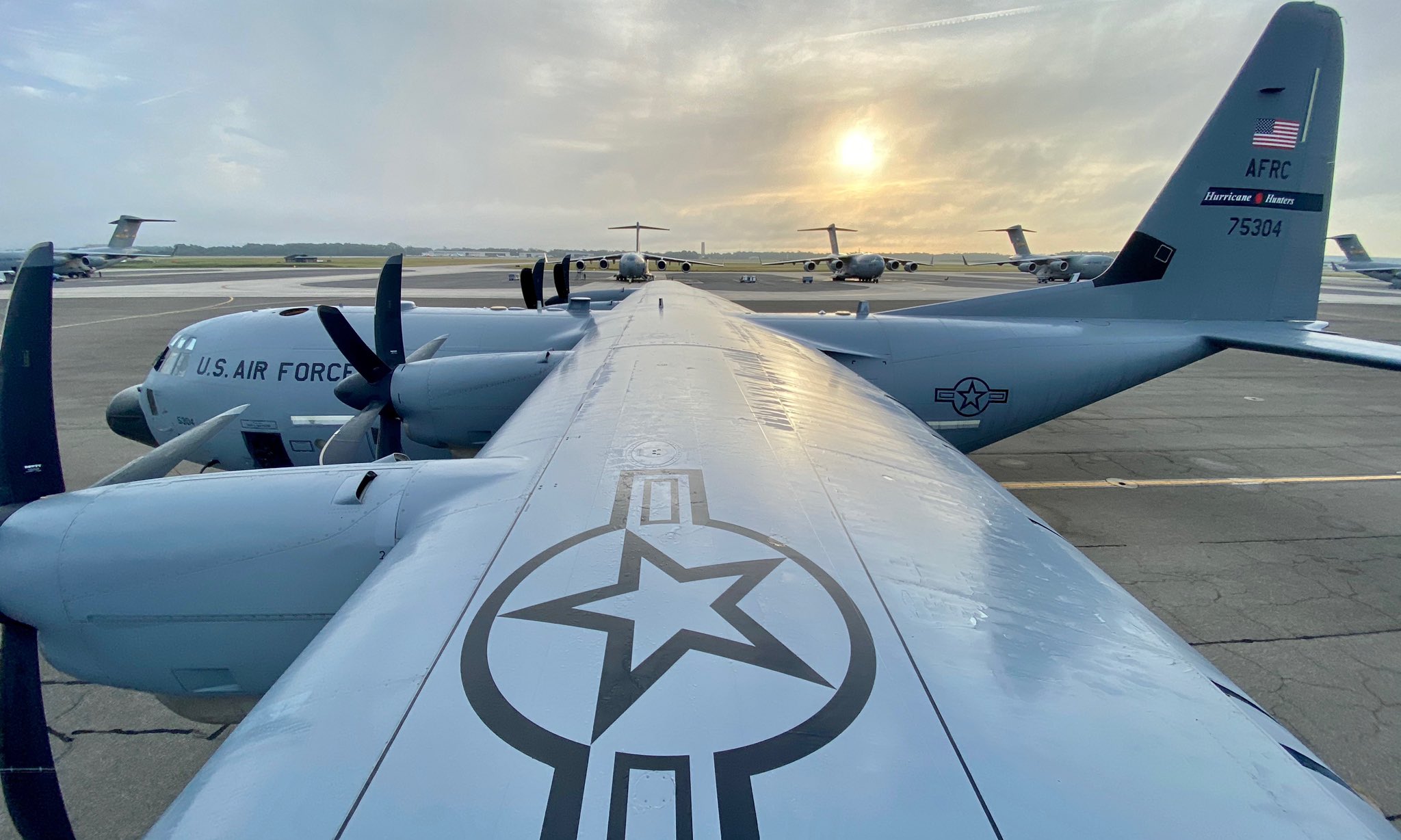 Major Tobi Baker is one such meteorologist. He’s an Aerial Weather Reconnaissance Officer for the Air Force Reserve’s “Hurricane Hunters.” Last week he flew into Epsilon, which at 115 mph, was a major Category 3 hurricane, and the fourth major hurricane of the season.

Flying a plane into a massive, destructive force like Epsilon seems insane, to say the least. But Major Baker says we need airborne meteorologists such as himself to accurately monitor the movements of hurricanes, as satellites can’t get sufficient information to make accurate predictions.

“Satellites are thousands of miles above us. I've been in many storms where the satellite said it was just a storm, but once we got into it and got the real data, it was a Category Two or Three: a hurricane,” he says.

“[Weather bureaus and authorities] take in a combination of our data—that's probably their bread and butter—and they put it together with satellite and other data to get the most accurate models they can.”

So, crews from the US Air Force Reserve and the National Oceanic and Atmospheric Administration drop everything when they’re called out to an oncoming storm. 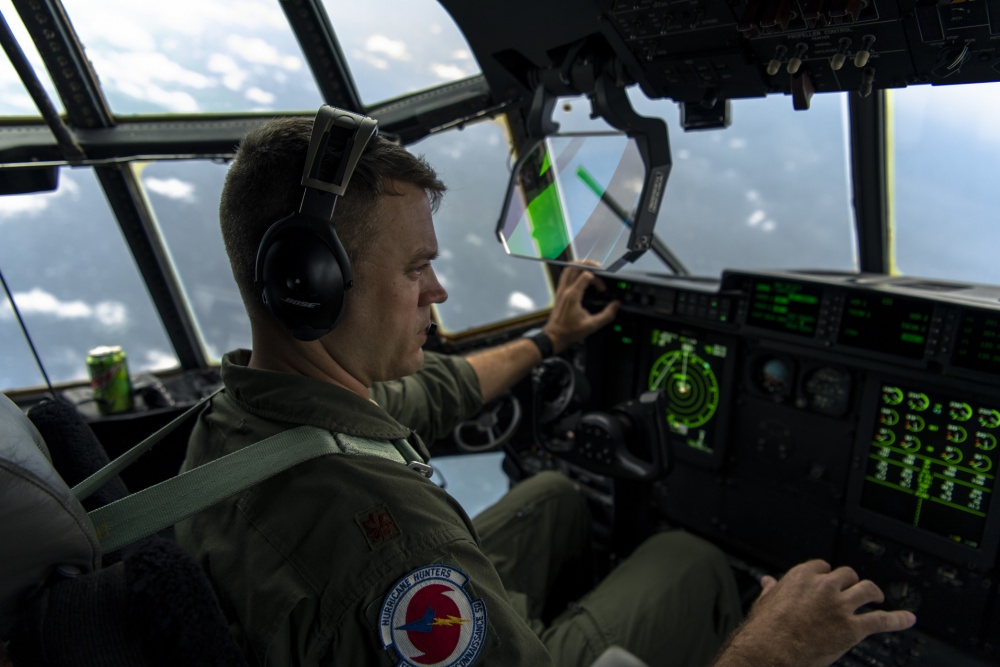 U.S. Air Force Major Stephen Pituch is a pilot who doesn't get a mention in this story. The image does however give you sense of what pilots see as they head into hurricanes. Photo by Tech. Sgt. Chris Hibben, US Airforce

Most of the time, Major Baker’s missions begin at the Keesler Air Force Base in Mississippi. However, the area of sky his department is responsible for spans hundreds of miles, so crews often move around to be closer to a storm. To get to Epsilon, Major Baker’s team flew from South Carolina.

According to Major Baker, hurricane missions take place all throughout the day and night, and most last around 10 hours.

“That’s the time we spend going to the storm, in the storm, and back out of the storm,” he says.

As a plane approaches a hurricane, it quickly becomes enveloped in dense, dark cloud.

To navigate this fortress of wind and rain, the crew relies on the live data they’re collecting as they fly.

Then, once they’ve entered the storm, the crew faces the wildest part of their mission: braving the eyewall. This is the most furious and turbulent part of a hurricane, near the centre. Passing through the eyewall can have crews gripping tightly to the underside of their seats, jolting around like they’re in an action movie.

On the other side of the eyewall lies the eerily quiet eye of the storm. 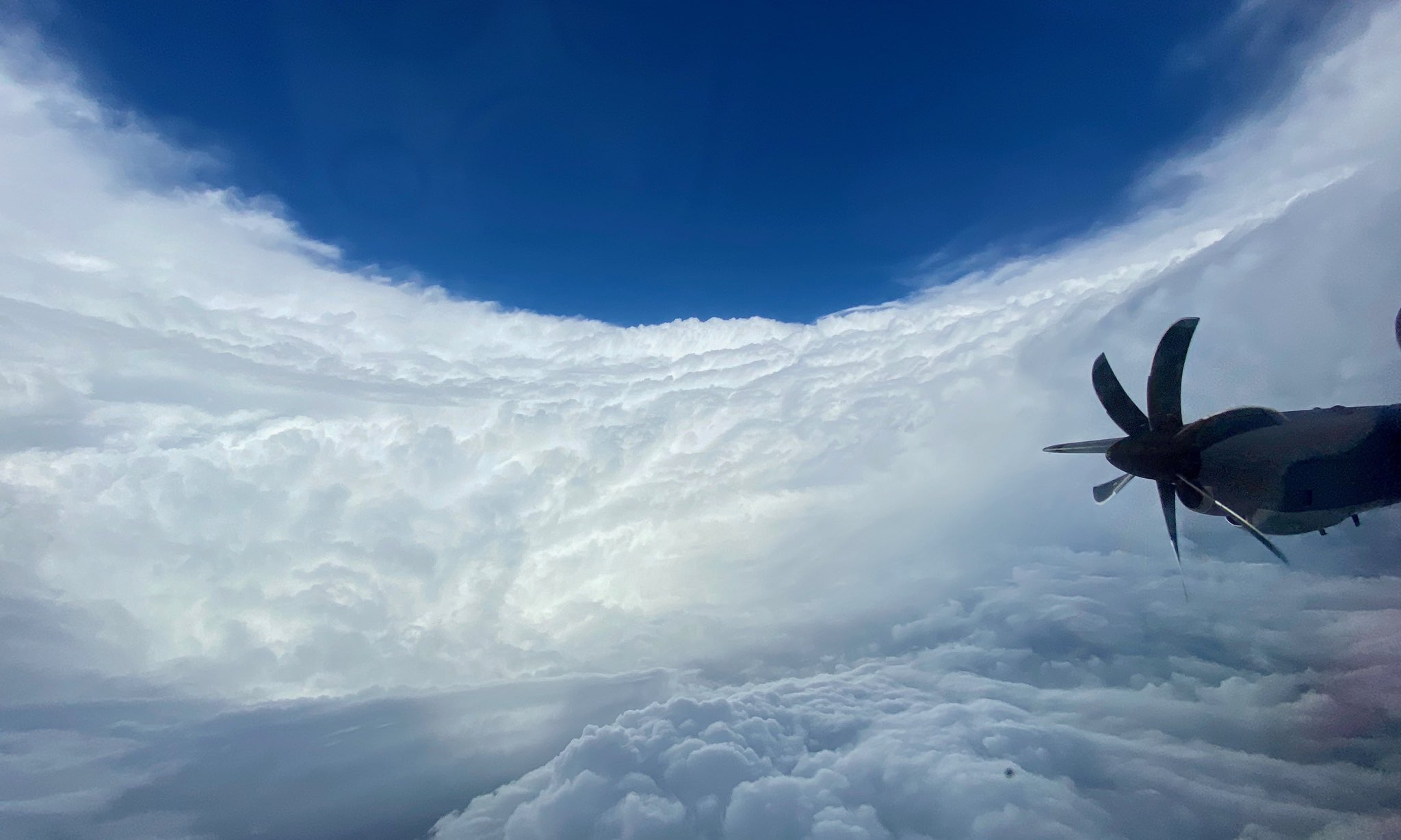 The eye of Hurricane Epsilon on a daytime flight that Baker wasn't on. Image via Air Force Reserve Hurricane Hunters

“You just have to grit your teeth and go in, but once you’re past the eyewall normally it’s really calm,” Major Baker says.

Major Baker’s trip to Epsilon was in the dead of the night, so he didn’t get to see this particular storm's center. But he says on daytime missions, the view from the cockpit while in the eye is mesmerising. Clouds billow out to encircle the eye—and the plane—in what’s known as “the stadium effect.” The scene is truly otherworldly.

Major Baker and his crew usually fly in and out of the eye multiple times, zig-zagging through winds reaching hundreds of miles per hour, for several hours on end. For the duration of the flight, the aircraft itself collects data with devices like dropsondes, which are dropped from an altitude over water to assess storm conditions. Major Baker and his team then analyse this data to track the speed, direction, and intensity of the storm.

Hurricane hunters have contributed to accurate meteorology in this way since World War Two. But the first person to fly into a hurricane didn’t do it for science. Like many impressive feats, airborne meteorology began as a bet.

There’s a few versions of the hurricane-hunter origin story, but all involve an American colonel named Joe Duckworth. In 1943, Colonel Duckworth quashed doubts allegedly raised by British soldiers about the quality of his piloting and aircraft. He did this by betting the Brits he could fly through a hurricane.

The story goes that Duckworth pulled off the trip with relative ease, realised the scientific potential of more such flights, and hurried back to his base to find a meteorologist—and preferably one who wouldn’t mind a bumpy ride.

Seventy-seven years of hurricanes later, flight and data collection technology has improved drastically. Even so, crews still need the same nerve—and ability to keep their food down—as Colonel Duckworth did back in 1943. 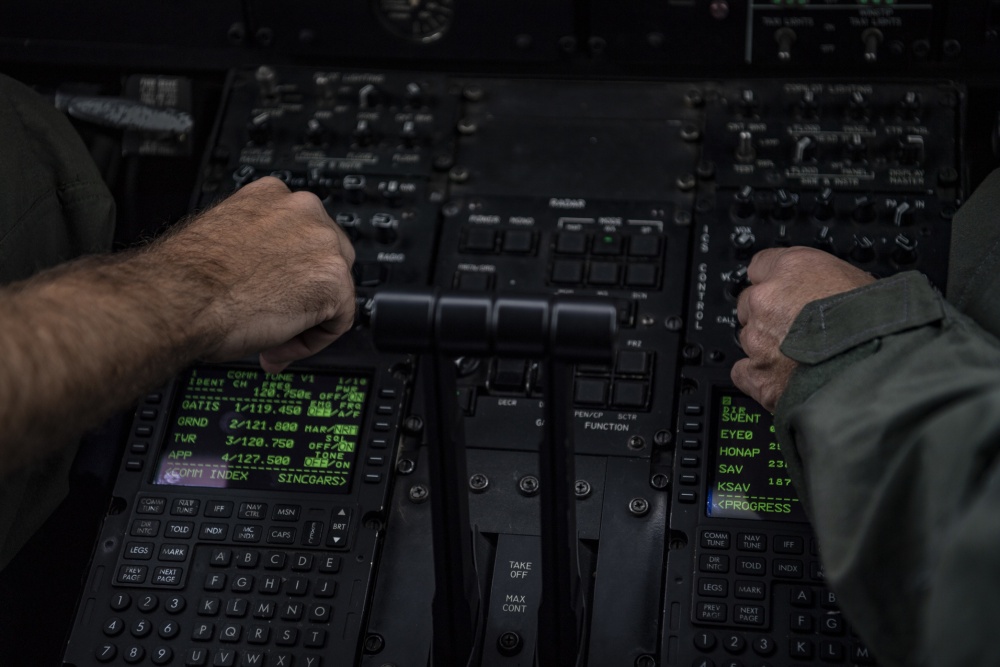 Hands on the flight deck controls. Photo by Tech. Sgt. Chris Hibben via the US Air Force

Today, Major Baker’s crew flies a WC-130 Hercules. This plane is capable of cruising at 300 miles an hour for 18 hours at a time. It’s a far cry from the single-engined Beechcraft T-6 Texan II Duckworth took into the storm all those years ago.

Even with today’s highly advanced aircraft, Major Baker says every mission comes with turbulence—these are hurricanes we’re talking about, after all. But the intensity of the flight varies widely, and is impossible to predict. Major Baker explains that sometimes a ride in a high category hurricane might be smooth enough that he can get up to microwave a pizza for lunch (yep, there’s a microwave on board). Conversely, a smaller storm can sometimes feel like an excruciatingly rough dirt road.

“Epsilon was not extremely bumpy which is good because, you know, the less turbulence the better,” he says.

When asked about his most terrifying hurricane hunting experience, Major Baker recalls a time he was well and truly in the washing machine: Hurricane Rafael, in 2012. He says he doesn’t usually feel scared doing his job, but this mission went “a little awry” due to a phenomenon known as “dry air intrusion.”

“The storm was trying to build on one side and the dry air was coming in the other side causing it to decay, so you had this weird dynamic going where it’s building and dying at the same time,” he says.

This phenomenon created a series of what are known as “convection cells” which are essentially mini-thunderstorms within the hurricane. And if flying through several storms-within-a-storm sounds nightmarish, that’s because it was.

“There’s all these thunder-cells all over the place, and we’re in the middle. It’s like going through a briar’s patch. The turbulence is getting worse and worse and, well, you can’t get out by going the direction you want to go, so we just have to pick our way through. It should have taken maybe 20 minutes to get out of the storm, but it took at least 45.” 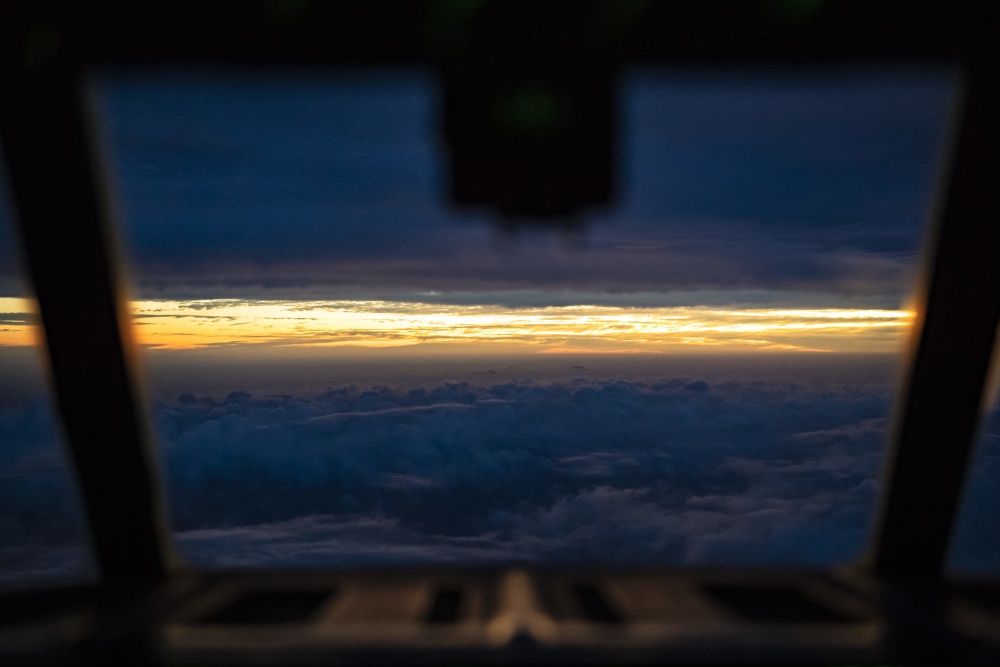 The sun sets through the front cockpit of the WC-130J. Photo by Tech. Sgt. Chris Hibben via the US Air Force

Major Baker is nonchalant about his propensity to handle extreme conditions like these, but he is sometimes reminded of how unusual his job is when his crew takes media ride-alongs on bumpy flights.

“Once in a while people sit there and have their seatbelt on, certain bags come out because their food is not staying down,” he laughs. “But then there's some flights where you feel like you're just sitting there twiddling your thumbs.”

It’s this diversity of experience that keeps Major Baker excited about his job. He’s been a hurricane hunter since 2008, and he says every mission is different.

“Every storm is different since you’re dealing with Mother Nature,” he says. “Even if you flew in the same hurricane every day, it’s always different, it’s always a challenge even though you're collecting the same type of stuff.”

And for Major Baker, collecting that stuff makes being a hurricane hunter well worth every long shift and painfully rough eyewall.

“Me and the people in my squad really like doing the job we do. We enjoy collecting the data, because it's for the safety of a lot of people out there.”

Thanks to that data, we know Epsilon has now eased out of hurricane status. However, it’s still rumbling over the North Atlantic and is expected to produce dangerous swells along the east coast of Canada and the US.