By Using Agro-Waste to Cremate Bodies, This Indian Man Has Saved 35,000 Trees

The majority of people from the Hindu community in India prefer to burn the bodies of their dear ones on a funeral pyre almost always using wood. Which means tonnes of wood burnt annually for cremations across the country.

This thought had troubled 52-year-old Vijay Limaye, an insurance surveyor and loss assessor in the central Indian city of Nagpur, every time he attended a funeral. But the turning point came when he cremated his father’s body in 2010. “I really had no choice at that point of time, I used wood,” Limaye told VICE News.

Soon after, Limaye started exploring other methods of cremation. During his work travels in various states, he started visiting crematoriums to see if there were any alternatives to wood.

Hindus believe a human body is made up of panchtatva, the five elements. The mortal remains need to be returned to the elements by consigning it to the flames, one of them.

Limaye found his answer in some parts of west and central India, where the body is burnt on a pyre made of cow dung cakes, “I zeroed in on dung cakes as a good alternative,” he said.

Limaye convinced the local civic body, Nagpur Municipal Corporation (NMC) to run a pilot project at one of the 14 crematoriums in the city. Around the same time, through his team at his NGO Eco-Friendly Living Foundation, Limaye gave lectures at several public places, institutions and colleges to raise awareness among common people on why they should avoid using wood for cremations. 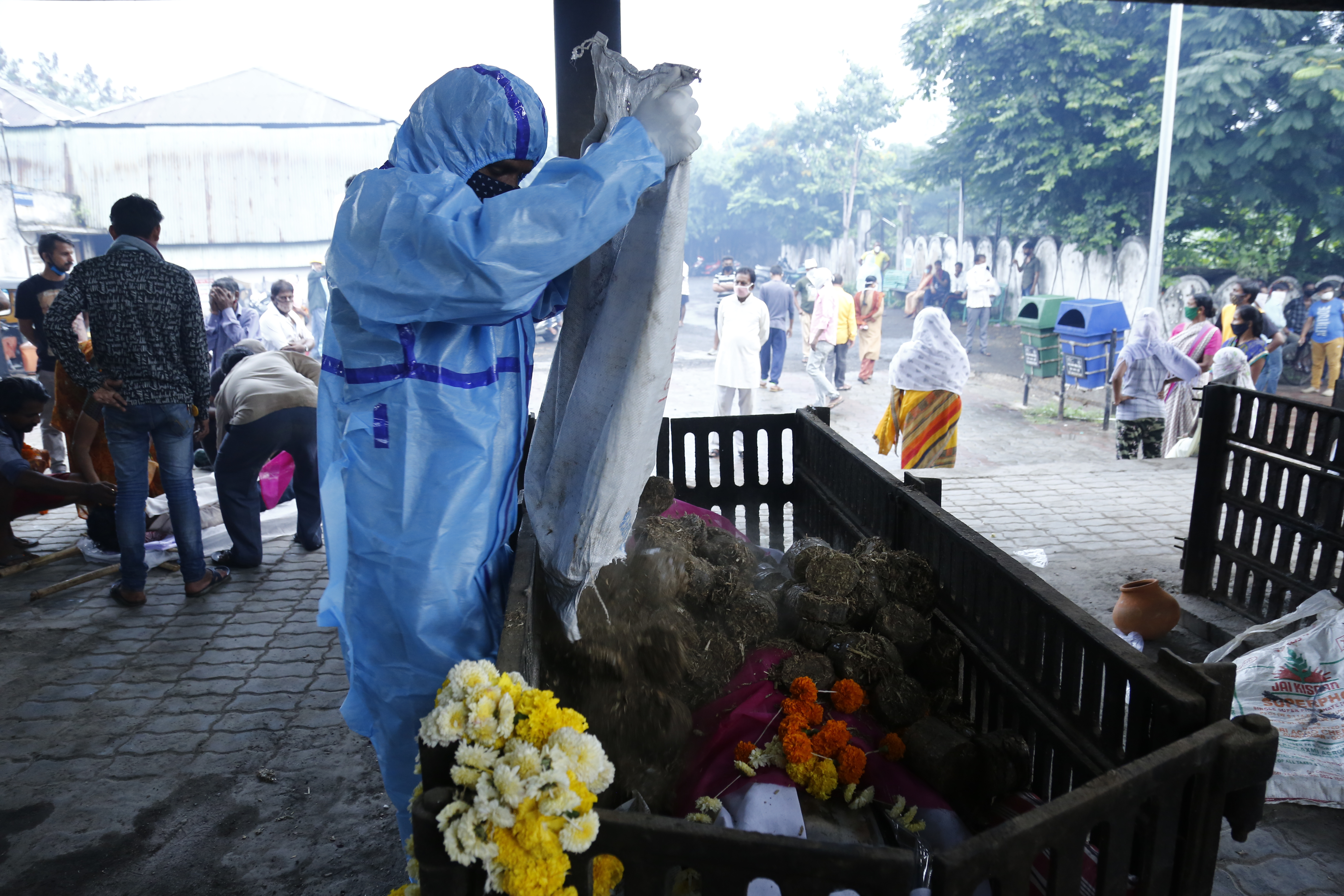 A municipal worker empties a sack of agro-waste over a body laid on a layer of briquettes at the funeral pyre at one of the crematoriums in central India's Nagpur city. Photo by Sangeeta Mahajan.

He was able to persuade people to opt for dung cakes despite the fact that the NMC was offering wood free of cost for funeral pyres.

Soon, he hit a roadblock. The suppliers started demanding exorbitant prices per dung cakes. But more than that, Limaye said, “A year or so into the pilot, I realised, dung cakes would not match the demand in the long run.”

What was needed was something that was both affordable and sustainable in terms of demand and raw material used. Limaye was passing by an agriculture field on fire. It is a common sight in the country, particularly the hinterland, as the farmers choose the easy way out to get rid of the crop residue before next sowing.

That was the end of Limaye’s search. “My logic was simple. Crop residue is burnt anyway. So, if we use this for cremation, thousands of trees would be saved.”

Now, he had to come up with a model briquette that could replace wood for cremation. “Each morning, I would spend at least 3-4 hours at the cremation ground. Once a week, I could convince a family to use briquettes. I would diligently note down the time and quantity of briquettes required to burn the body completely.”

In this case, briquettes that would burn for roughly three hours would serve the purpose. A factory on the outskirts of Nagpur was already manufacturing briquettes using saw dust, furniture shop waste and crop residue of different crops.

After some trial and error, a briquette made of either soybean, arhar dal (split pigeon peas) or cotton crop residue was found to be the right combination. 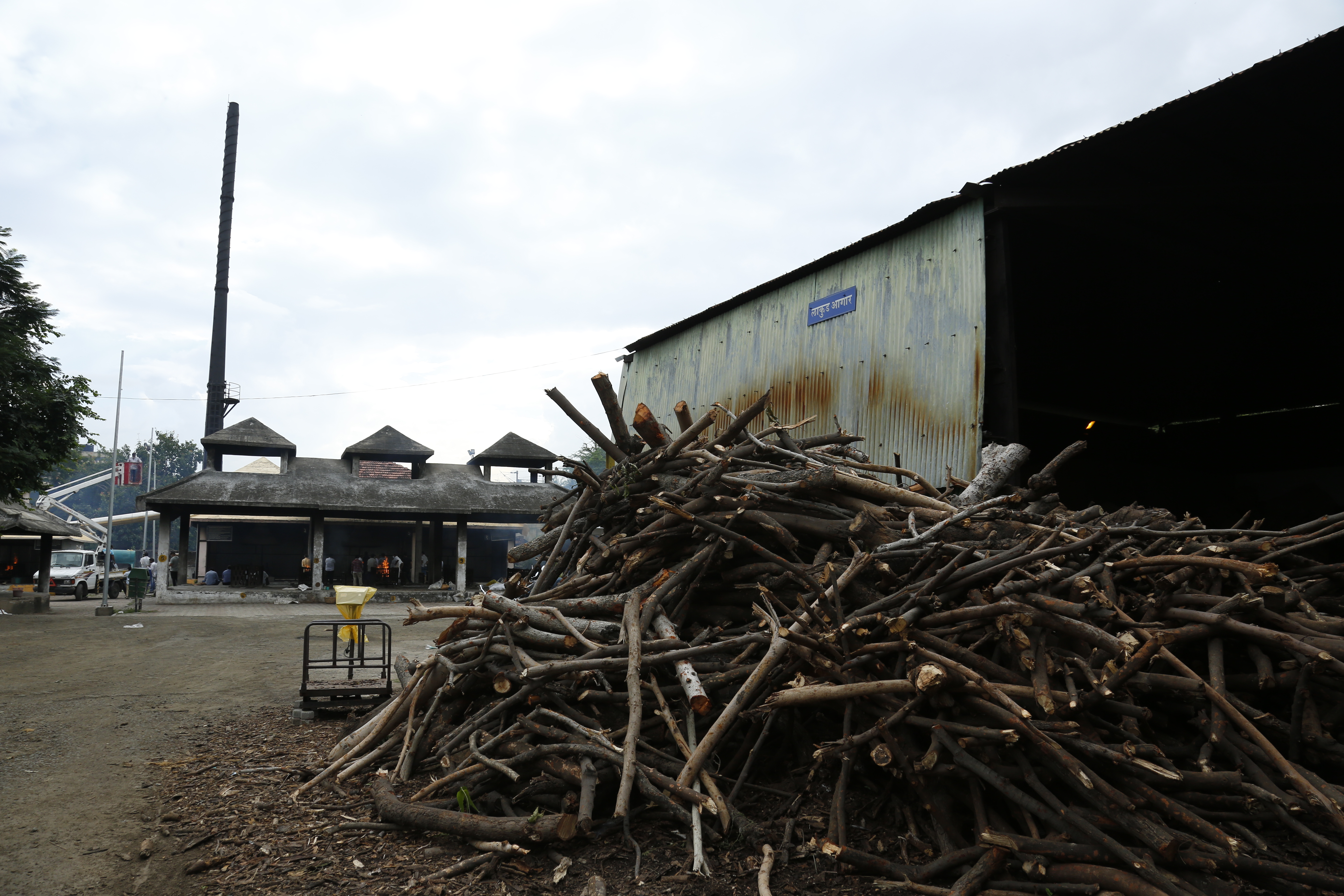 “Finally, after 13-14 cremations, I got the desirable result.” Limaye named it mokshakashtha (translated into ‘wood for salvation’) as the briquettes resemble wood.

All this continued through 2015 at his own expenses.

In November 2015, Limaye took the idea of briquettes replacing dung cakes to the then Nagpur Mayor Praveen Datke, who had already given a green signal to the use of dung cakes in cremations. “Our corporation (NMC) had corruption issues vis-à-vis buying wood for cremation. Briquettes made from biomass were a refreshing alternative,” Datke told VICE News.

He allowed Limaye to run another pilot project for three years at the same crematorium. NMC offered a 100 percent subsidy on cremations using briquettes.

In the three years when the pilot ran at the crematorium, almost 60 percent of the bodies were cremated using mokshakashtha.

In September last year, Limaye’s non-profit was given five more crematoriums for two years. “Initially, we had to persuade people. Within 2-3 months, the demand picked up,” Niranjan Pandurang Shinde, NMC official at one of these five crematoriums, told VICE News.“At this crematorium, more than 50 percent of the bodies are now burnt using mokshakashtha,” he said.

During the last three years, as many as 18,000 bodies were cremated using mokshakashtha. “One funeral pyre needs approximately 250-300 kgs wood. Two trees of 18-20 years age are needed to obtain this much wood. With this calculation, we can easily claim to have saved more than 36,000 adult trees,” Limaye said.

Over the last decade, the demand for briquettes using agro-waste has been rising and dozen-odd units have come up around Nagpur city to supply according to the demand – for boilers, for cremation, for cooking food etc.

Limaye’s non-profit buys from a manufacturer and in turn supplies it to the NMC.

The national capital faces a massive air pollution problem when pollution from crop residue burnt in north-west India travels to Delhi and NCR region every winter. Even the National Green Tribunal had in 2016 demanded replacement of wood to reduce air pollution in Delhi.

Using agro-waste for briquettes has resulted in multiple co-benefits. The farmers are able to dispose of the crop residue in a better manner. The soil remains healthy as burning crop residue was destroying the soil quality and fertility. The crusher, collection and then briquette making all have generated employment opportunities for the locals.

And in the city, people cremate their dead ones without the guilt of felling trees.