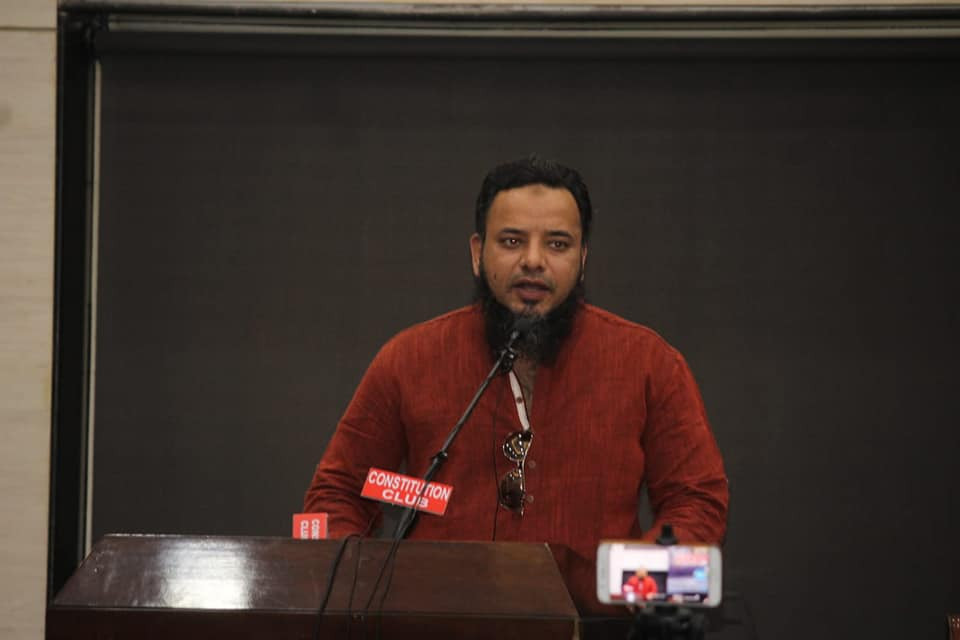 Late night on Sunday, September 13, police arrested UAH member and former student leader Umar Khalid, 33, under a controversial anti-terror law, the Unlawful Activities Prevention Act (UAPA), for his alleged role in violence that broke out in the capital New Delhi in February.

Khalid, a former student of Jawaharlal Nehru University (JNU), is among more than a dozen vocal critics of the proposed citizenship law, who have been arrested in the last six months. Indian government’s crackdown on dissidents of the law, called the Citizenship Amendment Act (CAA) has drawn flak from national and global bodies.

The proposed law is considered discriminatory against Muslims. Many believe it is against the secular spirit of the constitution as it fastens the naturalisation process on the basis of religion.

Soon after the government introduced the law in December last year, protests erupted across the country.

In New Delhi, the agitation took a violent turn in February resulting in the death of 53 people.

Khalid Saifi, another UAH founding member, was arrested in June in connection with February violence.

Khalid Saifi, co-founder of UAH movement, addresses a gathering at the Delhi Constitution Club in 2019. Photo courtesy of United Against Hate Facebook

Three years before the deadly clashes, Khalid and Saifi formed UAH along with fellow student activists in the wake of hate crimes against minorities.

“We have been working for the last three years. We have conducted more than 400 rallies in north India against hate crimes. The profile of UAH is out there in the public domain. You can check for yourself if there is anything problematic,” said Khan.

In 2019, the collective set up a helpline to assist victims of hate crimes. UAH successfully prevented a communal clash in the western Indian state of Rajasthan in 2019.

They also organised a protest in support of Tabrez Ansari, a 24-year-old man from the eastern Indian state of Jharkhand who was lynched over suspicion of bike theft. Following the protest, the murder charge against the accused was reimposed.

The group was instrumental in investigating irregularities in the functioning of foreign tribunals in the northeastern state of Assam. Roughly two million people who did not find their names in the list of citizens in Assam were given the provision to approach foreign tribunals (quasi-judicial bodies) to prove their citizenship.

In 2018, the group found that communal violence in the northern Indian state of Uttar Pradesh was the result of an engineered strategy by certain groups.

In December 2019, UAH focused all its energies in organising peaceful protest against the citizenship law.

In March this year, leaders of Prime Minister Narendra Modi’s Bharatiya Janata Party (BJP) made speeches suggesting that UAH had a role in instigating violence in February.

BJP parliamentarians referred to an edited clip in which Khalid can be seen urging people to take to the streets during the US President Donald Trump’s India visit on February 24. However, the politicians failed to mention parts of the speech where Khalid stressed that they must fight against the government using two weapons: Ahimsa, non violence, and Satyagraha, the policy of  non violent  resistance.

“For Umar, who battled hatred on a daily basis, UAH was a personal project,” Dr Banojyotsna Lahiri, one of  UAH co-founders, told VICE News.

Lahiri knows Khalid from the time when both of them were research scholars at JNU. She believes that Khalid has been targeted for being an educated and articulate Muslim. “Khalid’s fearlessness is what makes him a threat to the idea of a Hindu nation. Despite prolonged attempts to silence minorities like Muslims, they [government] have not been able to silence him,” she said.

Khalid was previously charged for sedition in February 2016, along with fellow JNU  student leader Kanhaiya Kumar. Khalid spent more than a month in jail. The trial  is still ongoing.

“We condemn the arrest of Umar Khalid who has been subjected to a malicious investigation targeting peaceful anti-CAA protestors,” reads a press statement signed by 36 activists, journalists, academicians and politicians against Khalid’s arrest.

Khalid’s arrest came a day after the Delhi police named four intellectuals, politicians and academia for allegedly encouraging the anti-CAA protestors as part of a “conspiracy”.

“The Delhi riots are being used as a witch hunt against anybody raising a dissenting voice,” Kavita Krishnan, Secretary of the All India Progressive Women's Association and member of the Communist Party of India, told VICE News. Krishnan pointed out that no evidence to convict the accused was found, and the statements given to the Delhi police so far are all framed using similar language, which she believes, could be a sign of coercion.

Nine former police officers wrote an open letter stating that the Delhi riots investigation was “flawed”, and would “ mean that real culprits of the violence belonging to the majority community are likely to go scot free.”

Experts say the UAPA is a draconian law due to its vague definitions of what constitutes an “unlawful” activity. The law allows for the accused to undergo an extended detention period and indefinite imprisonment without trial. “A pattern is emerging of the UAPA being used as a tool to repress dissent”, Amnesty international has noted.